Reknowned cycling photog Phil O’Connor has just published his newest compilation of his favorite racing images. The PEZ-pals at Bikecafe.net talked with Phil about his 21 years shooting bike racing, the riders, races, and his favorite pics…

BC: What were your favorite years to capture cycling via the camera lens? (due
to equipment, racing styles, etc) 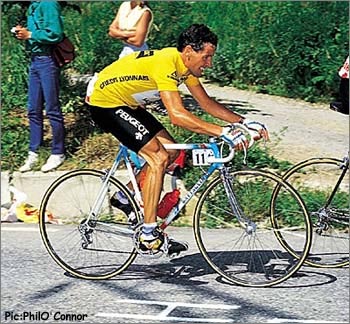 Phil: I really enjoyed 1987, especially the Tour de France, it was such a fascinating race with so many changes of leadership but also because it was the first time that a British trade team (ANC) was taking part, Roche’s exciting win was followed by victory in Austria at the World Championship’s and finally the season came to a close with Roche and Kelly riding together in the Tour of Ireland alongside Greg Lemond. It was a wonderful way to end the year.

I also enjoyed the 1993-1994 seasons. I had got to know Chris Boardman well and had followed his build up to the attack on the Hour record when all of a sudden I was in Norway photographing Graeme Obree breaking it first! The following week Boardman took the record, signed a pro contract and within a year was wearing the yellow jersey of Tour leadership. I spent a lot of time in the company of these two riders and as such was privileged to witness the highs as well as the lows.

BC: Aside from specific pictures, what are one or two of your finest memories, you have carried away from a race 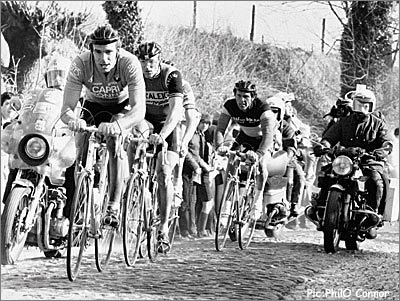 Phil: I have fond memories of traveling to Het Volk in 1982. The previous year had been my first year of dabbling in cycling photography. As the 1982 season began I wanted to get out to Europe and go to an early good one day race. I traveled by train overnight and arrived in Ghent at 6 in the morning, it was a freezing cold day with blue skies. I did not really have a press pass but blagged my way around the race finally seeing the finish back in Gent which was won by Alfons de Wolf. I had seen Roger de Vlaeminck for the first time in my life, up to then he was just an image in rarely seen foreign cycling magazines. I also saw Jan Raas, Sean Kelly, and many others, the whole day was a kaleidoscope of images and first time emotions, a day I will never forget. Finally I took the train back to Ostend, caught the ferry to Dover and then fell asleep on the train to London which finally shunted into the sidings for the night where I was found by the guard who had to escort me back down the tracks to the safety of the platform, it was a very memorable 24 hours!

BC: Do you have a favorite picture? Which one would you want people to know you by? 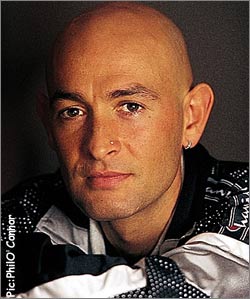 Phil: I do not really have a favorite photograph as such although I am very proud of all of my portraits, particularly of Armstrong, Ullrich, Indurain and Pantani

BC: What’s it like to be behind the scenes and/or in the race as a photographer?

Phil: Having done it for so many years the bike race, whatever the event or where ever it is becomes my place of work. Once there I am both looking for interesting images and also taking pictures that I know are needed for the library as well as features or news stories so often I am doing 3 or 4 things at the same time. Being in the race especially when on a motorbike can be very rewarding, as the race unfolds in front of you, you really have got the best seat in the house!

BC: By capturing images, you are by default capturing data to analyze. As such, who do you see as the “next” star from your point of view? 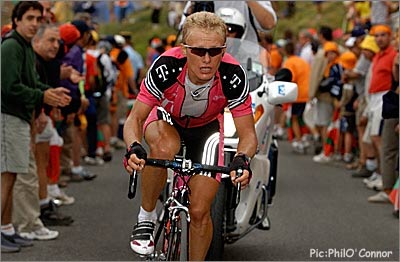 Phil: Never easy to predict, but I see someone like Filippo Pozzato becoming a future sprint star, I also feel that Vinokourov has what it takes to move up another rung and seriously challenge for the Tour de France. Closer to my home I would suggest Bradley Wiggins of Credit Agricole, a serious contender for the Olympic Pursuit crown, once this track season is out of the way I can see him progressing very successfully both in prologues and ultimately in top one day races particularly in Northern Europe.

BC: Are there plans for another book?

Phil: I would love to do another book! So many images did not make the final selection, one idea I have had is to produce a book of unpublished images, so if there are any publishers out there looking for ideas get in touch!!

BC: Thanks Phil for showing us some of your work! We are looking forward to some great shots this season!

More about Phil O’Connor
Phil’s work can be found at www.PhilOConnor.com. His first photographs were first published in 1981 and to this day he continues to produce photographs of the worlds top riders in the top races. He has worked on all the major races in continental Europe as well as regularly covering the domestic scene in Great Britain. He has also photographed races in Australia, America, Canada, Korea and China.

About www.BikeCafe.net.
A great resource for all things cycling-related on the web. BikeCafe.net has a huge directory of cycling related websites, news, reviews and other cool stuff – worth a look!