Olympic Cycling is just around the corner, and the English-speaking contingent is stronger than ever, both on track and road. We talked to Australian team pursuit rider, Big Steve Wooldridge, after his gold medal-winning ride at the World’s in Melbourne. Here is what he had to say.

Pez: You have now won three consecutive gold medals in the team pursuit, how do they compare?
Wooldridge: They’re all great, and I have been fortunate to win three. In a way the first one was really special for me coming off a traumatic year with my mum passing away only a couple of months earlier. Last year was great, with the world record falling, though I wasn’t in the team for the final. This year in Melbourne is special as well as it is the first time my family have seen me race. It is usually on the other side of the world. Having the family here made an unbelievable difference. 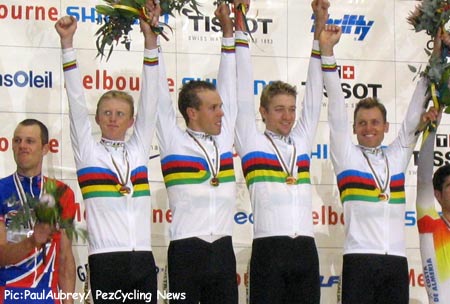 On the podium at the 04 Track Worlds: left to right Peter Dawson, Stephen Wooldridge, Ashley Hutchinson and Luke Roberts.

Pez: A group of nine riders are eligible for selection for the Olympic team pursuit, Graeme Brown, Peter Dawson, Ashley Hutchinson, Mark Jamieson, Brett Lancaster, Brad McGee, Mark Renshaw, Luke Roberts and you. How does the group dynamic work?
Wooldridge: Obviously we have more riders than spots on the track, which is great for Australian cycling having such depth. Most countries are strapped to get four guys together, and we have got nine strong riders. It is definitely hard, but it is a team that has been growing for the last few years. We have been through a lot of highs together but we have also been through the lows. In 2001 we crashed out, Brownie stayed up, Luke broke some ribs and really did his back in, Mark Renshaw broke ribs as did I, but the next three years we have been world champions. It hasn’t come easy and we’ve seen the down sides. It is a great group and we always have guys tapping on the door. It keeps us all on our toes and no one lets their guard down which is good for all of us.

Pez: I noticed at the Tour Down Under your helmet had some awesome looking rainbow stripes. Is that a custom job?
Wooldridge: No, actually the guys at Catlike in the States gave it to me. I think they did a custom job for Marga Fullanaa few years back, I was lucky enough to get one that was floating around.

Pez: Being a world champion, what is your opinion of people riding around in replica world champion jerseys?
Wooldridge: I wouldn’t do it myself. One good thing is that is does bring awareness. If the jerseys weren’t made and the recreational bike riders weren’t going to The Park (Centennial Park in Sydney) on a Saturday morning to do laps, the community might not be aware. It really means some thing special in our sport and we are the only people to do it. I have heard that rowing is considering something similar. 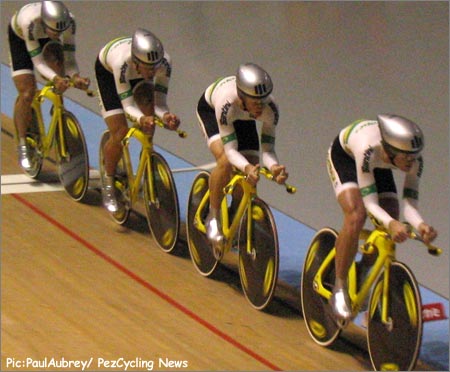 Steve and the team do their thing on the boards.

Pez: You are racing in Germany with a division III team ComNet-Senges, can you give me a bit of a run down on the team?
Wooldridge: Luke Roberts is also on the team, it’s small, the management is fantastic, there are no hidden agendas and things work well. I’ve got a great place to live and training is good as well. I’m really happy to be part of the team. We do all the big German tours and a lot of races in Holland, Belgium and a little bit in France. Just before I came back to Australia we raced in the CSC Classic (Corey Sweet (Aus) and Luke Roberts (Aus) both of ComNet-Senges placed 6th and 7th respectively) and GP SATS (Luke Roberts placed 8th).

Pez: Being your first year with the team, did Luke have anything to do with your signing?
Wooldridge: Certainly, I was staying with Luke in Germany for a month last year. I did a few crits that ComNet-Senges also did, and I was able to speak with the director and he was interested, the rest is history.

Pez: I notice that you have a degree in management, it is a different path compared to most other people.
Wooldridge: As you said it is a different path, it’s something I choose to do. To tell you the truth at 18 or 19 years of age I was nowhere near the bike rider I am today. It has given me time to mature and I think I needed it. Uni life is a pretty good environment to hang around in for a few years; it’s not a bad thing. It helped me grow stronger and I am really looking forward to the Olympic Games. (Said with a massive grin) 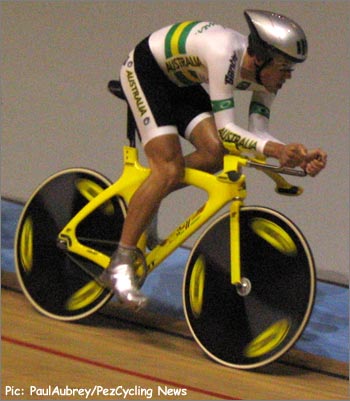 Bonus Round
Nickname: Big Steve
Season Home: Near Aachen, Germany
Off Season Home: Abbotsford in Sydney
First Race Result: It would have been a club race at Oatley Park, with the St George Club. If I am ever home mid season I will always head over to Oatley Park for the handicap.
Your First Bike: Santa gave me a Raleigh BMX!
Your First Crash: I broke my collarbone when I was 4 on a tricycle.
What did you want to be when you grew up? I don’t know I never really had a master plan.
If you weren’t a cyclist you would be? Someone in the workforce, hopefully it would be a challenging position, like cycling, that would make me strive to push that little bit harder to get to the top.
If you didn’t have to go training tomorrow you would…. Probably wake up late and have a nice long breakfast with my wife and read the papers.
Most used phrase: Pass
Favourite Meal: Pizza and wine
What would be on your Barbeque menu? A Small steak and sausages.
Last CD you bought: Paul Van Dyke, Reflections. I actually nicked it of Renshaw.
Favourite Movie: Snatch

Our Australian connection, Paul hails from Sydney. Growing up only a few hundred metres from his local track, his first taste of cycling was a junior on the track. But Paul he calls himself a cyclist, having raced road, track and MTBs. Writing his engineering thesis at The University of New South Wales is sadly taking away his riding time.

Supplements – The Problem with Science

MailBag: Give It A Squeeze