Grischa Niermann is a young German, who chose (and was chosen) to run for one of the biggest pro teams of the world: Rabobank. If a team like this one chose this guy, there’s a reason. Last year he took part at Giro d’Italia and Tour de France, with great results: 22th in the first and 51th in the second. Also in 2002, he arrived 4th in Vuelta a Murcia. He’s a rider made for the Grand Tours, and as he’s 28 years old, his fans will be waiting for him this year, on the Tour’s roads. Also because the team didn’t take part at Giro this year, and it seems sure that Niermann will be part of the team. He will be for sure a good help for Levi Leipheimer, especially in the Alps and in the Pyrenees. 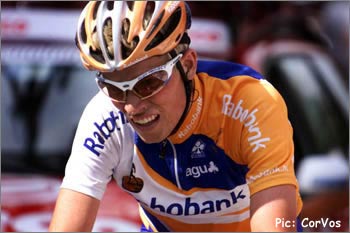 A face that knows how to suffer – something he learned riding all 3 Grand Tours.

PEZ. How have you been spending the winter months?

GN. I was training in Hannover, the Town where I live in northern Germany. In January we had a one week trainingcamp in Spain and another week in Italy.

PEZ. Where is your home, and what type of training are you doing right now?

GN.I live in Hannover/ Germany. Thats where I usually train. Right now I am in France to train the mountainstages of the Tour de France.

PEZ. When will you start racing again this season and what are your objectives this year?
GN. My next race is the Dauphine Libere, where I hope to get selected again for the Rabobank Tour de France Team. The Tour is also my main objective of the Year, because even I am only a helper there, it is still the biggest Race in the World. (Ed. Note: Grischa finished 22nd, 21:09 behind Lance.)

PEZ. How did you get started in bicycle racing?

GN. I started cycling because I was overweight as a child. After I lost about 15 Kilogramms by getting on a diet, I wanted to do endurance sport not to become fat again. That’s why I startet to ride my bike and I loved it.
As soon as I started racing, I dreamt of beeing a professional cyclist, probably like most of the kids that race bikes. 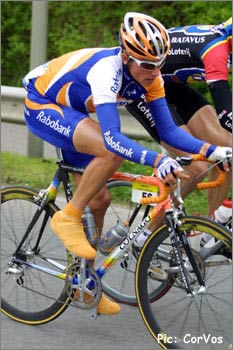 PEZ. Which of the 3 Grand Tours is your favourite and why?

GN. The Tour de France is the most important, most stressfull and also the hardest Race there is, but it is the one I like the most. The Vuelta and the Giro are a little more relaxed than the Tour. Both are very nice races. But after doing Giro and Tour in 2002 I prefer just doing one three Week event per Year.

PEZ. Is there a race that you like more into UCI’s calendar?

GN. The Tour of Germany is a very good and perfectly organised race.

PEZ. Last year you took part at Giro and Tour, and you showed to be a very good man for Grand Tours. What kind of rider do you think to be?

GN. I like the grand Tours. I finished 24th in the Tour 2000 and 22nd in last years Giro, so maybe I can really go for the overall one day. But so far I’m happy to be Levi Leipheimers domestique.

PEZ. If you could change something into you, what would you change? For
example, faster at climbing, or about your personality.

GN.I would love to have a better sprint.

PEZ. What do you learn as a professional racer that is valuable in other areas of your life?

PEZ. If you were not a racer, what do you think you would be doing?

GN. Maybe I would have studied sports nutrition, which interests me a lot.

PEZ. What advice would you give to a young rider looking to be successful in the pro peloton?

GN. He has to love the sport, because if you are just doing it for the money, you won’t get far. And Enjoy riding your bike. 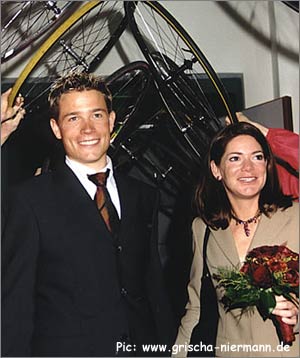 Our man recently tied the knot to the lovely… Frau Neirmann.

PEZ. What’s your opinion about the on going doping issue? What’s the right
way for resolve the doping problems? Who has the responsibility to clean it
up?

GN. There will always be people in topsport that take doping products. The only way to stop them is to be able to detect all products in the urine tests. I think its bad that in most peoples eyes doping is a “cycling problem”, but I think there are black sheep in all the sports where a lot of money is involved.

PEZ. What about Cipollini and his not-invitation at next Tour de France?
Were you waiting for it?

GN. I think Cipollini deserved to be at the Tour because he is world champion and the fastest sprinter in the peloton.

PEZ. This year Freire joined Rabobank; What do you think about your team of this year? What’s changed from last year?

GN. Our team is a lot stronger this year. Oscar is a great rider for the classics as well as for sprintstages in the Tour.

PEZ. Rabobank looks like a very international team. Also talking about you, you’re german. What language do you use into the team for the communication?

GN. The main language in the team still is dutch, which I speak fluently after beeing on the team for five years now. We also speak english and german, if guys like Zberg, Hunter, Freire and Bartko are around.

PEZ. And about Freire? Is it true that he speaks only Spanish?
GN. Oscar speaks italian and is trying hard to learn english, so it is not a problem to talk to him.

PEZ. What’s happened last year between Rabobank and US Postal? Will it happen also this year?

GN. We were defending Leipheimers place in the general classification of the Tour last year, so we gave US Postal a hand in chasing breaks down a few times.

PEZ. Whats the secret behind the teams ability to function so well with all the personalities?

GN. We have a very warm atmosphere in the team, we are all good friends and everybody is doing the work there is to do. When for example Boogerd doesn’t go for the overall in a race, he goes to get the waterbottles for us.

PEZ. How do your and the others families feel when the riders are away from home so much?

GN. That’s part of our job. My wife knows me for 7 years now, so she got used to it. If I’m away a long time in a row, it’s sometimes hard for us, but mostly I’m only away for a week or so and than I stay at home for a week.

PEZ. Do you have a personal website that our readers could visit?