I had the opportunity to speak with the General Manager of the Prime Alliance team and former pro racer, Roy Knickman. The position of Manager did not come up over night, but quick look at his career and you will see that Roy was destined to run his own team. The training for this position began in 1983 when Roy joined the Levi’s Raleigh team, which led to the opportunity of a lifetime. 2 years with the dream team, La Vie Claire, to ride along side cycling legends Bernard Hinault, Greg LeMond, Andy Hampsten and Steve Bauer.

Many things were learned during this period, which led to a stint with the 7-Eleven team in 1988 to 1990. Ny now, Roy was learning how different teams were run. In 1993 Roy joined the Coors Light team with an eye to the future. The day came in 1994 when Roy was asked to be the Coach of the US national Junior Team. Obviously Roy knew what he was doing as he was then asked to take on the role of Coach to the US Men’s National and Olympic teams during 1995 to 1997. Mercury asked Roy to join the team in 1998 and bring his many years of experience as both rider and assistant manager. 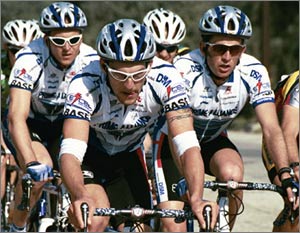 Since 2001 Roy has run his own team, Prime Alliance with great results and stable of very talented riders. Go to any US race and you will see Prime Alliance riders on the podium.

Rob: What is the hardest part of your job as both manager and Directeur sportif of the Prime Alliance team?

Roy: I am actually the general manager and Kirk the road manager/director sportif. My responsibilities are selling and servicing of sponsorship, financial organization, pr, and about a dozen other things. Kirk does all of the logistics as well as manage on the road. The hardest part of this is that the two of us do what four or five people should be doing.

Rob: The Prime Alliance team has some serious talent, any plans on adding to that talent with more riders next season?

Roy: We pride our selves on finding and keeping the best young talent. In the end though it is all about money. We tried for Danielson and lost the bidding war (as we did to keep Horner). If our program expands to include Europe we will need more quality young riders, again it is all based on money.

Rob: What are your ultimate goals for the team, will you try and follow Jim
Ochowicz’s example and get the team to the Tour de France?

Roy: We are always looking to expand the program. I have learned a lot from my past directors and understand the demands and difficulties of running a split program. We have pitched a Europe program to a number of companies but have not found any interested groups at this point.

Rob: Did you have any idols when you started cycling and did you ever get to meet them?

Roy: I was an unusual case as I started road cycling with no idea there was even a professional circuit. I trained and raced and improved. I liked the direct
feedback/response that my training efforts produced. I later learned about Eddy, Bernard and Greg and had great respect for what they had accomplished. I actually ended riding with Bernard and Greg my neopro year.

Rob: What to date has been the highlight of your career?

Roy: Missing the time cut at the tour of Italy in 1990 and knowing I would not have another opportunity to do another grand tour in my lifetime.

Rob: You rode for the La Vie Claire team, what was that like?

Roy: A tremendous experience. Bernard was a true champion and leader. He worked for others a good part of the year to develop the bond needed for his support at the Grand Tours. Also Paul Koechli was a great influence as he preached a drug free / training based philosophy. 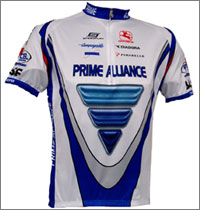 Rob: You have been involved with La Vie Claire, Coors Light, and Mercury teams. What is the biggest difference between a top euro team and a top American team?

Roy: It is more than just the size of operation. A domestic only team (Coors Light) is dealing with one rotation of riders and on occassion two, but all on one continent. A US / Euro team (7-Eleven, Mercury) is dealing with two rotations of riders in Europe and one in the US. This is the most staff and logistic intensive operation. A Euro only team is close to a US only operation as normally no more than two rotations without transcontinental travel. Operations aside, the US has less depth, making it a battle between the few super powers (Saturn, Prime Alliance, and Navigators when they show up full strength). Europe has more
teams and more riders capable of winning and influencing the outcome of an event.

Rob: What are you thoughts about helmets?

Roy: Helmets are a must. Our governing body needs be conscious of our health and safety. Helmets save lives. You should not train or race without a helmet. You may be very skilled but you can not control what a driver may do or what road conditions may be around the next corner.

Rob: What should be done with riders caught using drugs?

Roy: This is a difficult question. Intentional use should be dealt with harshly. For
unintentional usage there should be leniency if facts support the claim.

Rob: A quick look at the sponsors you have and most top ranked teams would be
jealous: Pinarello, Campagnolo, Giordana, Diadora, Rudy Project to name only a few. How did you get that many great companies to sponsor your team.

Roy: Yes, we are fortunate to have the best cycling industry sponsors there are. We have these sponsors because of the team we have put together, high profile, and the relationships we have made with the sponsors (good sponsor service).