Saxo Bank’s ‘Survival Camp’ – essential for team bonding, or a PR stunt? But its like ‘Nam; ‘how can you know what it’s like if you weren’t there, man?’ So we talked to new pro and former Under-23 Worlds bronze medallist, Jonathan Bellis for the low down; in between training for March’s track Worlds in Poland – and getting hunted by dogs!

PEZ: Where does it take place, Jonathan?
Jonathan: It kicked off in Copenhagen, apparently there are hundreds of islands around Denmark and it took place on two or three of them.

To tell you the truth though, I’m not sure where we were; we were all over the place! 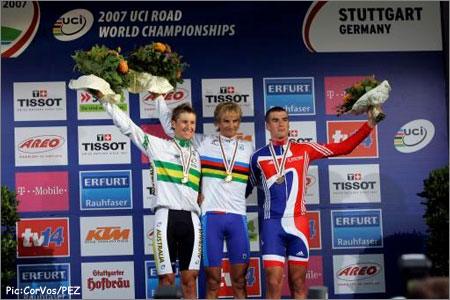 Bellis is best known for his podium finish at the 2007 U23 World Championships, but he has more than a few other results to back that one up.

PEZ: What was the format?
Jonathan: The first couple of days were mostly meetings, to get the bikes sorted; get to know the directors and discuss our programmes.

Then we went on a bus journey to what seemed to be an old army camp, we did some training exercises to prepare us and got kitted out with army gear. We were warned that at any moment we’d be given ten minutes notice and we’d be off.

The call came at 1.00 am – we’d only been sleeping for a couple of hours, then we had to get aboard these freezing cold army trucks. They drove for about half-an-hour then we were dumped in the forest and we had a ten hour walk from that point to another pre-determined point.

They had army guys chasing us and firing machine guns at us; and there were dogs on our trail too – it was great fun! It was perfect to get to know people and we had to work as a team – you’re only as strong as your weakest man. 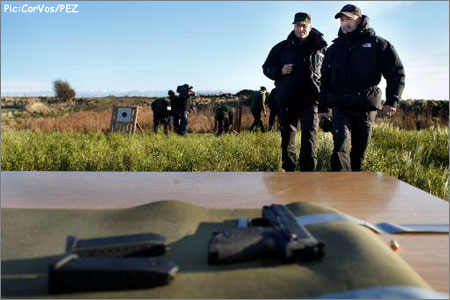 Apparently they were big into guns at the survival camp this year.

PEZ: What about essentials, like food, sleep, warmth, soap and water?
Jonathan: We had plenty of good food prior to it, there were a few times when I was hungry, but never starving – to tell you the truth we always had so much on our mind that we didn’t get the time to worry about it.

We had to sleep rough, but we built a fire in the forest for warmth.

When we did the part that involved the ship, we had to do tasks which involved getting soaked and freezing – so we weren’t that bothered about seeing any more water to wash with! And it was so cold we certainly didn’t want to take our clothes off. 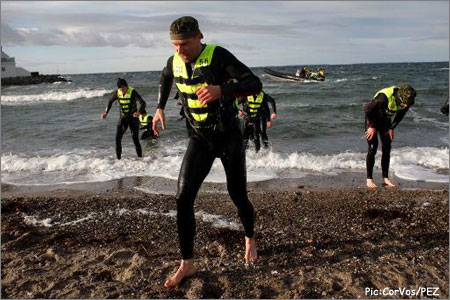 Jens Voigt looks warm coming out of the water.

PEZ: Ship?
Jonathan: Yeah, we had to board this old Viking ship and sail for 16 hours, we took shifts and the weather wasn’t bad – I wouldn’t like to have done it if it was blowing a gale, though!

PEZ: Who was John Rambo?
Jonathan: The leaders of my group on the walk were Brad McGee and on the ship it was the Schleck brothers. Brad and Frank were good leaders, but they’ve done it before, so they have the experience. 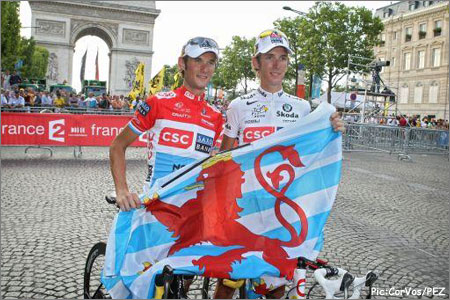 PEZ: And who was the ‘woos?’
Jonathan: One of the bus drivers, who doesn’t speak English found a lot of the tasks pretty hard and we had to help him through, but he was a good laugh and good for morale.

PEZ: Were Bjarne and DS’s there?
Jonathan: Like I said, Brad was there and Kim Andersen too – Bjarne popped up here and there, but he was organising and watching – although I think he’s done it in the past. 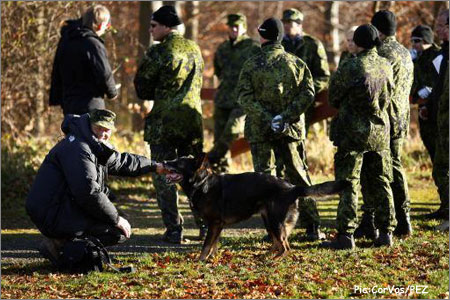 Bjarne spends some quality time with one of the attack dogs.

PEZ: How’s the training going?
Jonathan: I’ve been mixing road and track; we didn’t actually ride the bike much during the 10 days I was at the camp. I’ve been training in Manchester, both on the track and on the road; the weather hasn’t been the best – cold and damp.

But we have a good group going out; Brad Wiggins, Geraint Thomas, Ben Swift and Rob Hayles – basically track endurance guys. I’m targeting the track Worlds at the moment; they’re in Poland in March – I hope to ride the Madison and team pursuit. I have to get my track work in now, because I’ll have training camp commitments in January. 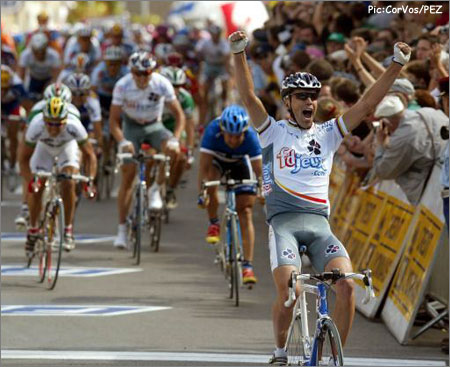 It wasn’t too long ago that Bradley McGee was winning Tour stages and swiping leader’s jerseys in all of the Grand Tours.

PEZ: Does the team advise you on training?
Jonathan: Brad McGee rings me once-a-week and gives me pointers about what he thinks I should be doing in terms of hours.

I’m still coached by Rod Ellingworth, who coached me when I was with the GB U-23 squad; I run what Brad says past him and come up with my programme that way. Ultimately though, it’s down to me.

PEZ: Has your programme been agreed?
Jonathan: I have a training camp in Majorca in January, then another in California in February. My first race is Lugano, Switzerland in February then I have a couple of one day races in Spain before the Tour of Murcia at the start of March.

After that the focus is full on for the track Worlds for the rest of March. 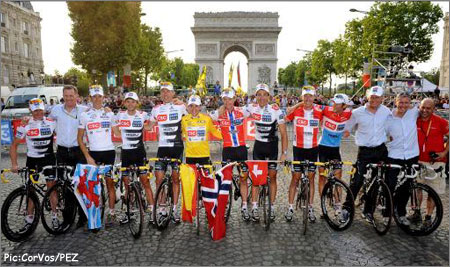 Bellis finds himself on arguably the best team in bike racing. Not a bad place to get started.

PEZ: How has the loss of the IT Factory sponsorship affected things?
Jonathan: Not massively, it’s not the best of things to happen but everything is in place for next year.

We’ve been told that there’s a chance that Saxo Bank might take on the additional sponsorship; plus I’ve no doubt that Bjarne will be working hard behind the scenes to get additional sponsors. It’s not something that I’m thinking about.

PEZ: Frank Schleck has had his troubles.
Jonathan: He said to us that if he’d been found guilty of wrong doing then he couldn’t have looked any of us in the eye again, but as you know he has no case to answer. 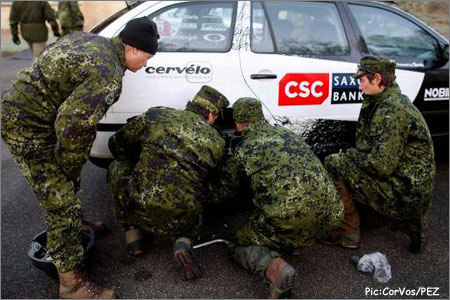 What’s a survival camp without some tire changing?

PEZ: And for Christmas?
Jonathan: I’m going home to Isle of Mann; I’ll be doing a lot of steady miles and spending Xmas with my friends and family.

***
Chased by dogs – no wonder Cancellara’s so quick! With thanks to Jonathan for his time and wishing him every success in his new career.