Last week we got into part 1 of our chat with Floyd at the Phonak camp in Mallorca. As part of the group interview, we did our best to ask a few not-so-cliched q’s, and Floyd was gracious enough to offer some not-so clichйd answers. Today we talk about the new team and management styles, how his season will take shape, and a little life off the bike…

UNDER NEW MANAGEMENT
PEZ: With your change of teams there will of course be a change of management styles, as well as maybe goals and objectives. Without necessarily saying what is better or worse, what are some of the differences?

Floyd: One thing for sure that will be different from Postal Service is the fact that Lance is the management on the Postal team. That will be the biggest change.

PEZ: I see; that was really how it was. 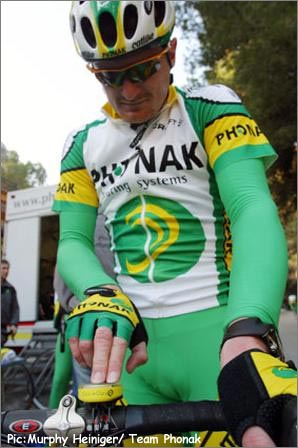 Floyd: Yeah, I don’t think anybody had any questions about that. Not to say anything bad about Bruyneel; he is definitely one of the top managers in the sport. But he and Lance coordinate together probably to a greater degree than on any other team. And Bruyneel is manager and director, so he has that dual role, and as a director, he is one of the best. But when it comes to some of the decisions made about the team, certainly Lance has equal say, and I think it is probably not like that on any other team. And rightfully so, I mean Lance has won the Tour six times straight, so they must be doing something right.

But I personally don’t have any intention of playing that sort of role, even if it was a possibility.

Pez: You’re really waiting to see how the dynamics of the team start working out once racing begins?

Floyd: Yeah, I think everybody has clear roles. Nobody is vying for the lead or anything. And I think John (Lelangue, the Managing Director), will keep everything in working order, but it’s not like he is the director in the car yelling in our radio transmitters; Johan did both things. And so here they will have a Manager and three Directors, and all of the guys are equally capable to keep the team competitive. But it is a completely different arrangement on the Postal team in comparison to all the other teams. But I’m not saying that’s bad or anything, because it certainly has proved to be a working formula.

Reporter 2: Did you already decide which riders will go to the Tour?

Floyd: We have a general idea, I think. Phonak has done it before, and can get a team together. We will be able to build a great team. But things happen, people get sick or injured, so it’s tough to say who exactly at this point will be going to a particular race, so it is not entirely clear.

Reporter 3: How is your input? You’re the leader, and do you go to the management and say who is going to help you in the Tour?

Floyd: Mainly I leave the decisions to the management, while giving them my input and my ideas as we go along. I mean I can talk to John (Lelangue); obviously, I’ll have a bit of a say, but I think we can all most of the time see what decisions will need to be made. But if there is a final decision that needs to be made, then I will leave that to the management.

Reporter 4: When do you start your season?

Floyd: Last year I started in the Algarve race, and the classics. But this year I think I’ll start at Murcia, and then hopefully the Criterium International. Then there’ll be a break before I head to the Tour of Georgia and after that, we’ll have to see what’s going on, but this year I’ll start a little later, and hopefully that will have me at my peak for June-July. Last year I tried to stay in top condition for the full season, and I was lucky most of the time, but by the end of the year, I was really tired and got sick in the Vuelta so this year we’ll try to go in a little more focused, the way Lance does.

Reporter 5: Worlds in Madrid, is that like a home race for you?

Floyd: I like Madrid a lot. It is a beautiful city. As far as the race itself, it’s tough to say because the race is for sprinters, as far as I can tell. So the Time Trial may be a better possibility. But it’s a long way off, so it is tough to say at the beginning of the year. Last year I would have liked to have raced the world championships, but I got sick in the Vuelta, and wasn’t able to go.

Reporter 2: What would be your absolute win?

Floyd: Oh, a classics race, or a stage in the Tour or anything like that. I think that certainly with the capability and opportunity to win, I could win an individual stage or something like that.

Floyd contemplates how fast his new BMC Time Machine will carry him.

OFF THE BIKE
Pez: What do you do when not racing, training, winning stages?

Floyd: Well, I have an eight year old daughter, and she takes up most of my time off the bike.

Pez: Does your family stay with you in Girona during the year?

Floyd: Uh, well they come back and forth. When I’m training loads or racing, then it’s difficult for them to be here in Europe, so they may be here for a few weeks, and then I’ll go home for a few weeks at a time. But there’s no perfect way of mixing in the family when it comes to racing. You make sacrifices.

Pez: Any post career plans yet, any bike designs in the background or professional training camp, how about a clothing brand??

Floyd: No, I don’t have any particular desire to start any brand of my own. For me at this point, I’m just focusing on the racing part. I have no plans to start up any company trading on my name as a racer. I’m not saying it won’t happen, but for now, the racing part is what is getting my full attention.

And with that we packed everything up, thanking Floyd and the Phonak PR man, Georges, for their time and openness. It was great talking to Floyd, and getting some of his insights into what has been happening in his racing life the past several months, but it wasn’t much fun sharing him with the other reporters. But in the interest of time and energy, the interview was arranged as a round-table sort of engagement. But now the ice is definitely broken, and Pez is looking forward to getting Floyd in on a one-on-one later this year.

Read Part 1 of our interview with Floyd here.