In part 1 of our interview, we talked about the rigours of racing all season, the Pro Tour, doping an just scratched the surface of his memories as a pro in the 1970’s. Today we ask him about the future of German cycling, and as we’ve seen Klaus-Peter is never at a loss for insights and opinions…

FUTURE OF GERMAN CYCLING
PEZ: There is no doubt that you have been very successful, so I was wondering how do you feel you were appreciated, particularly by the German public which doesn’t seem to be as into cycling as much as perhaps France or Spain or Italy. Do you think that there is a very strong interest in Germany, and was when you were racing? 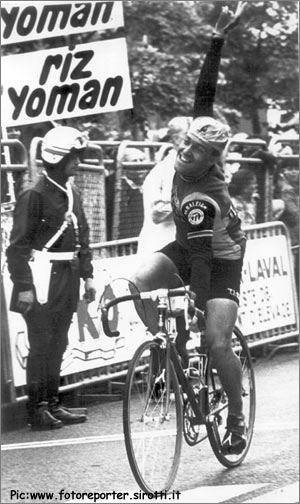 K-P Thaler: Ugh…yeah. Cycling has generally always been very popular in Germany. Particularly before the war – the six day race and road races always attracted much interest. After the war many cyclists got back into racing. Sports did a lot to re-establish Germany’s reputation abroad, beginning with the football world championship, and of course cycling played its part. We can look to a racer I know personally, Hennes Junkermann, who was the oldest of the strong riders. He rode very well in the Tour de France. Then there was Rudi Altig of course, and Rolf Wolfshohl. They were the troika who really did a lot for German cycling in the fifties and early sixties.

This was followed by a quieter period where Germany did not really have any top riders. By the seventies, there was another group of three – Dietrich Thurau, Gregor Braun and myself, followed again by a quiet period. We did have good riders but not to the point where they would win the world championships or place highly in grand tours.

But then came the time of Jan Ullrich and Team Telekom. A German racing team was something we did not have in my days. But now it has become the expected norm. Now Germany has two top teams – Gerolsteiner and Telekom. The German riders are successful at the very highest levels and even lead top international teams. This has indeed helped the sport of cycling to make a big leap forward.

Another massive factor has been the extensive television coverage for cycling. What you can see of the Tour de France across the media today was impossible in our days. Maybe you caught the last quarter of an hour of a stage, or you had to switch to Belgium or Dutch television. But German television offered relatively little coverage. There would be a group of journalists who would travel and follow the sport, but they were more focussed on the world championships, the Tour de France, or the “Henningerturm” race.

For the rest of the year, very little information trickled into the media from abroad, more or less accidentally. Most of the time the racer had to do his own press work. You would for instance call in from abroad, and report that you had won second place in a race in Belgium. This would in my days be part of the job of a cyclist. You had to be your own PR man back then. Today things are radically different. So much so, that in some cases the teams have to shut out the press because they are being hassled simply by too many people. And this causes your daily schedule of training and racing to suffer. It requires that you make yourself available too often to the press and media. This is certainly very difficult.

But cycle racing in Germany is very popular which I think is a very positive thing on the whole. However, this popularity has not necessarily left its mark in the cycling “industry”, i.e. the sale of more bikes, more equipment, more clothing – the sort of business we are in – but the sport is experiencing an increasing acceptance among the population. People in Germany now know what bicycle racing is all about. In the old days, you had to explain things to the end consumer that would be common knowledge in countries like Belgium, Italy or France. 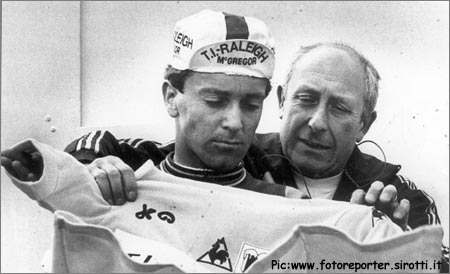 PEZ: Now in terms of the future of German racing now, many of the top racers, Jan Ullrich, Eric Zabel, Jens Voigt I think, are products of the old East German mentor programs;

PEZ: Oh, good…Germany, or any other country that has had a lot of success recently, but aging stars, what do these countries have to do to encourage young racers to devote themselves to cycling, particularly when you have sports like football (soccer) which are more accessible or popular?

K-P Thaler: It is true that currently German cycling is strongly profiting from the ex-GDR (ed: German Democratik Republik or East German) riders. But I am still surprised to see new riders like (Patrick) Sinkewitz and others who are riding at the very front. These riders are no longer the “product” of the old GDR – they grew up under current economic conditions which are considerably better than what you had in the old GDR and still stick to the sport of cycling. This to me is a result of the great popularity the sport currently enjoys. The coverage is very broad and people have come to view and accept this sport as being one of the toughest sports around. Young people consequently find it interesting to rise to this challenge, even though it may be less demanding to participate and easier to make more money in a sport like football. But football is played by a lot of people and to get to the top of the sport is consequently much more difficult, whereas cycling is pursued by far fewer and the chances of leaving your mark are subsequently much greater.

PEZ: Before you joined the professional ranks, you had a very successful junior and amateur racing career. In today’s world of pro racing, what is the ideal way for young riders to integrate into the pro ranks without having to push them too hard, or push them towards drugs, perhaps?

K-P Thaler: This is definitely a problem we are facing today. That is to say back in my days you had a system of starting out as a “jugendfahrer” or junior racer, then you could raise to the amateur level, which allowed you to build your profile racing intermediate races. And then, if possible, you would clinch a contract with a professional racing team. Today, however, you have to make your mark relatively quickly to gain your place in one of the professional teams, which is often quite difficult. I do believe that some promising talents may never make it because they lack the necessary forcefulness or opportunities to reach the highest levels. This I believe can be the problem with the new systems of the elite license, which made it impossible for non-professionally sponsored riders to compete in international racers. But I still believe that the change was necessary because the amateur sport in its previous conservative ways was no longer able to be sustained financially.

PEZ: How would you then advise a rider just starting out in the sport, and how to protect their future after cycling.

K-P Thaler: I would tell them that if they want to become a good bike rider, that they have to start very early, have to concentrate on the sport, no drugs, no alcohol, have girlfriends or boyfriends a little bit, but not too much, because it really takes a lot of time. And one thing I always told my riders when I was coach of the national squad, having a profession (ed: outside of cycling) is very important. So while you are still young and in school, learn as much as possible. That means studying if possible, or doing a training course of some sort, to have a normal profession, because even if you are a good rider, perhaps you’ll have a crash, or something will happen that will prevent you from continuing in the sport, then you have to do something. And if you didn’t learn anything when you were younger, then it is really hard to find a profession to make a living.

I have been able to become a business man, but there are a lot of former racers who were quite successful and today they have no money. I know a rider of my generation, who was very successful and was five or six times world champion; a very popular rider who earned a lot of money, and now he is driving a truck. And he lost all his money. He bought some horses and very fast cars, but now no money is left. That’s a pity because if you don’t learn a profession it is really hard to earn your money after you finish racing.

There are a lot of people who lost their money. Sometimes they gave it to people who they trusted to invest it, and those investments didn’t work out, or the people mishandled the money for the racer. And even Eddy Merckx who invested all his money into his frame building, at the very beginning he had a lot of problems and nearly went bankrupt. But then business picked up and now it is a very strong and established brand.

INNOVATIONS
PEZ: Now, you are certainly keeping involved with cycling through your business, Thaler Sport, what do you think are the greatest innovations since you quit racing, whether it is technical or organizational?

K-P Thaler: Well, bikes haven’t changed much. For example, if I take the oldest bike that I have here from 1927, and compare it to a bike from today, purely from an appearance point of view, not very much has changed. Some technical details have changed but comparing it to the innovations of , say, the motor car, very few things have actually changed. What is new, of course, are new materials – the carbon frames or titanium, better shifting and better wheels, i.e. rims and freewheel systems, technology; the tires have improved. But, luckily, in the end it is still the rider himself that acts as the determining factor of how good or bad someone rides.

In other sports it has been the technology that has moved into the foreground. Take motor sports, in Formula-1, for example, the technology plays the major part. The driver is, of course, still very important but a it only takes a small technical detail or fault to make him drop out of the race. But in cycling, even when the best materials are being used, it is still the sportsman who must dominate. Having said that, where major changes have become most apparent in cycling is, of course, with time trial bikes. In my time you would ride more or less the same bike in a time trial as you would during a normal stage. Maybe we would be given better wheels or lighter tires, and perhaps even have slightly lighter materials overall. But today’s time trial machines are completely different form the normal road racing bikes.

Thanks also for Photos:
MsteelCycles.co.uk
– and for headshot at top: VSO.de
Like PEZ? Why not subscribe to our weekly newsletter to receive updates and reminders on what's cool in road cycling?