PEZ was lucky to have a chat to Sarah Ulmer of New Zealand, the day after she took gold, in the women’s individual pursuit at the Track World Cup with a time of 3.31.157. The ride was just out side Leontine Van Moorsal – Zylard’s world record time of 3.30.816.

Pez: Firstly, congratulations on your ride last night. I don’t think many people in the crowd had an idea how close you were to the world record.

SARAH: Neither did I really (laughs)

Pez: You appeared to struggle to get up off the bars at the end of the race? You gave it everything you had?

SARAH: To be honest, I don’t think you have ridden a pursuit properly if you have anything left at the end.
(At the end of the pursuit I noticed her coach carrying her saddle that came loose during the race.)

Pez: I noticed that you have an SRM on your bike, what kind of outputs are you producing?

SARAH: To be honest we haven’t even down loaded it yet. We have only been using it for 2 days now. We borrowed it from a guy in New Zealand to use to collect data before the worlds and Olympics.

I commented that Pez has just reviewed an SRM and the readers might be interested in some figures.

SARAH: I wouldn’t release those kind of figures to the public anyway, it would be embarrassing.

Pez: You seem quite a versatile rider, winning stages of road races and a very successful pursuiter. How would you describe yourself as a rider?

SARAH: Definitely a flatlander. When the road goes upwards I am usually struggling. Put me in a small breakaway and I would back myself for the win, but not usually a bunch sprint.

Pez: What kind of support does the New Zealand cycling federation give you?

SARAH: My sponsors back in New Zealand have been keeping me afloat for the last 8 years.

Pez: Did you ride here in Sydney during the Olympics?

SARAH: Yes I did, I placed fourth in the pursuit here on this track. I love riding on this track, we don’t have anything like it in New Zealand. The indoor track, with the crowd, the lighting and all the facilities is great.

Pez: Leontine Van Moorsal – Zylard, one of your main rivals, is known for her make-up and nails routine before a race, what is involved in your pre-race routine?

SARAH: I’m a bit of a cruiser before a race. I don’t do anything out of the ordinary like slapping myself around the cops or doing star jumps in the in field. It is all about concentrating on the warm up.

Pez: What would you want to hear from someone before a race, good luck really isn’t relevant in a pursuit?

SARAH: Just rip in to it. 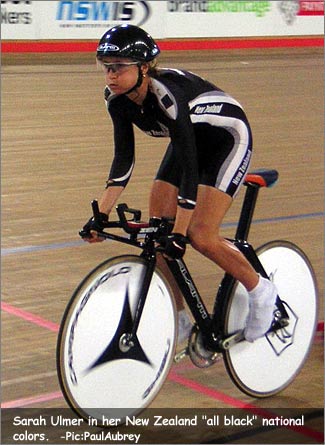 Pez: You are very smooth on the bike, especially out of the starting gate, do you do any specific training for this?

SARAH: (With a blank look) Nah it must come naturally (laughs).

First bike: First bike was a hand me down from my bro. My first racing bike was my grandfather’s Zeus that is now 65 years old!

Last Movie: A re-run of Pulp Fiction of TV and Along Came Sally at the cinema.

Favourite CD: The Herbs which is a New Zealand band, most of the members are dead actually.

Your Favourite Drink, there are no bonus points for Stienlager: I don’t like beer anyway, I would have to say Bailey’s.

Meal of Choice: Steak or pizza

When you grew up you wanted to be a….. Vet

If you weren’t a cyclist you’d be ….. Probably failing vet school

Watch out for Sarah at the up coming world championships in Melbourne.

Wisdom of Age 2: The Physiology of Aging