PEZ is at the Track Worlds right now in Melbourne Australia. We’re not sure what day it is, but Paul Aubrey talked to Aussie track star Sean Eadie – about the stuff that matters: squats, his facial hair, and disciplining unruly children… 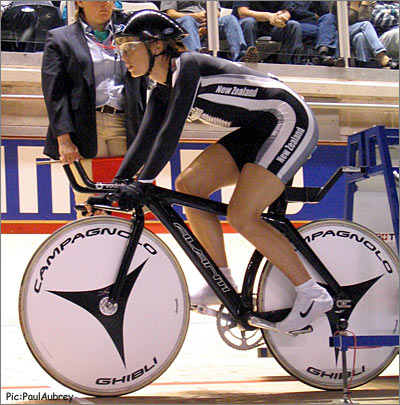 The big story to come out of Melbourne today was that Sarah Ulmer of New Zealand broke the world record for the women’s 3000m individual pursuit! Riding a time of 3:30:604 to qualify fastest. PEZ 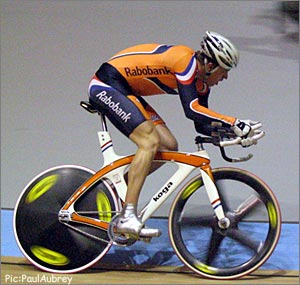 The ‘kilo’ saw Chris Hoy of Great Britain take gold, with Arnaud Tournant of France second and Dutch rider Theo Bos third. The next final of the evening saw two close fought battles in the men’s individual pursuit. In the race for gold, Sergi Escobar of Spain narrowly edge out Robert Hayles of Great Britain. The race saw bronze went down to the wire, with Germany’s Robert Bartko scraping past Luke Roberts of Australia! Clara Sanchez took out the women’s keirin with Elisa Frisoni of Italy second and Jennie Reed of the USA third.

THE INTERVIEW
PEZ was lucky enough to have a laugh with one of cycling characters, Sean “The Big Man” Eadie. Here is what he had to say. (Sadly as my mother will read this it has been censored.) 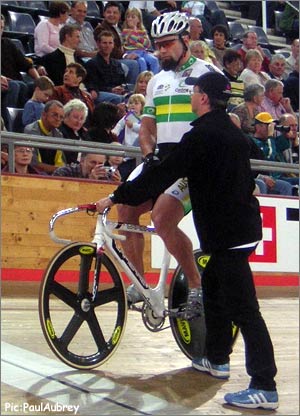 Pez: I know you want to tell all the readers some of your records in the gym.
Sean: Three weeks ago I squatted 240kg, for 2 reps, weighing 98kg!

Pez: What about bench pressing?
Sean: I can’t bench press to save by bloody life. I don’t have any beach muscles, if I’m down the beach I’m wearing a long sleaved t-shirt and shorts.

Pez: Your facial hair has frequently been a topic of discussion, can you give us a run down of it history?
Sean: 2 years ago it was a dirty, festering doormat! There used to be a cartoon character in Australia called Agro and he was a dirty festering little thing, or it was maybe based on Ned Kelly. It is really blatant laziness to tell you the truth.

Pez: I recall hearing that you were a primary school teacher; what kind of disciplinarian are you?
Sean: Yeah I taught kids aged 5 to 12. I just kicked them out, I am not putting up with any crap. When I did my first prac as a student I had the beard and a shaved head and I looked pretty criminal. I had kindergarten, they were aged 5, I got the name Mr Gorilla. Over the weekend I shaved it off, on Monday in assembly, they were all rubber necking to check me out and some of the cheeky little bastards were mock shaves towards to me!

Pez: You’re known as a bit of a joker around the track, there must be some great stories?
Sean: There isn’t much to tell, we are really dirty Australian sprinters who have lots of fun and could get into a lot of trouble.

Pez: I heard the flu went through the camp last week?
Sean: (Insert joke) Yeah the flu hit a few of us and I am the last of us to get it out of my system. I have basically spent the week in bed, which is great, but it depends on who you spent it with!

Our chat was interrupted for a few minutes when former world champion Gary Neiwand dropped by.

Pez: One of your coaches described you as a “challenging experiment” recently. So what does this really mean?
Sean: What!? (I had to explain myself very quickly!- PA) I had all of last year off due to a knee injury and only started training back in January. In five months I have gone from an every day citizen to qualifying for Athens in the team sprint. My race weight is 100kg and I got down to 92kg last year. My squat has gone from getting myself off the toilet seat to 240kg! It has been a long hard road, and I have spent many days lying in bed absolutely stuffed.

Now for a geography lesson, I live in the southern part of Sydney, the area is known as “The Shire” (short for the Sutherland Shire) or as we call it, God’s country. The Shire has many great sporting exports like swimmer Ian Thorpe, cricketer Glenn McGrath and cyclists including, Rochelle Gilmore, Matt White, Graeme Brown, Mark Renshaw and The Big Man himself. Sean is a back page star of the local paper, The Leader.

Pez: What is it like being one of the Shire’s favourite sons?
Sean: It is a haven of sporting talent. It is so hard to win the Leader’s sports person of the year. How ever with the Sharks (local football team) playing the way they are it is a bit easy. I consider myself one of The Shire’s many talented sportsman.

We will see how Sean performs later in the program in the men’s sprint.