The US Postal Service cycling team is riding high heading into 2003, their new team roster just announced, poised for a record-tying 5th consecutive TDF win, and another major sponsor signed up. But how does a team this successful get started, and grow to the point where the sponsor’s answer “why not?” when asked the question: “why sponsor this team?” In fact, there’s a lot more going on behind the jerseys and team cars than most fans realize. We recently talked to Dan Osipow, VP of Cycling for Tailwind Sports, about his corporate-side perspective of running America’s top ranked team.

CORPORATE DAN
Tailwind Sports is the company that owns and manages the US Postal Service cycling team. Osipow’s role is stated officially as Vice President, Cycling Division on the Tailwind Sports website, but tells us that his daily job is made up of many varied tasks and responsibilities. “We’re a small company, so we all wear many hats. I’m involved in running the team on a daily basis, working on sponsorship sales and finding new sponsors, maintaining the relationships with our 25+ sponsors – all at different levels of involvement from financial support to product support – liaising with the press, handling media and interview requests…”

The list goes on but Dan talks about the fast pace with the comfort and confidence of an old pro. In fact, he’s been with the company for a dozen years, and was one of the original employees. Tailwind actually grew out of Montgomery Sports which was started in 1990 by Thom Weisel, the owner of prominent bay-area investment bank Montgomery Securities. In fact Thom started the Subaru-Montgomery racing team of the early ’90’s – the same guys that offered a young guy named Lance his first pro contract!

Dan tells how he and Thom were talking about the future their young amateur team: “It all started one night over dinner and a few drinks one, and Thom said he… “wanted to be the first American team to win the Tour de France”. Thom is known for building winning teams, and it took a whole lot of blood, sweat and tears, but we did it.” 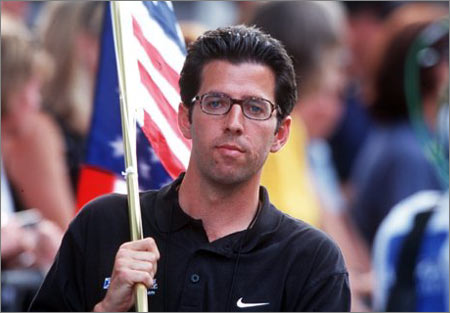 Dan does a lot more than just carry the flag as VP of Tailwind Sports.

SOLID SPONSORSHIP
Ever the Nosey-Parker I ask Dan about what keeps a major sponsor on board for so long, given the relative exodus of sponsors from the sport of late… “The Tour gets more exposure and coverage here at home than any other sport, there are hundred’s of hours of live television coverage. It seems ironic that competing internationally in foreign lands, gets us more exposure in the US than we could generate if raced only domestically. Cycling is a very emotional sponsorship, and we’ve taken US Postal to recognition levels beyond everyone’s wildest dreams”.

Beyond running a team that bears the corporate sponsor’s name, Tailwind Sports has worked closely with US Postal’s international division, as well as their domestic-based employees to build good will and doing promotional work. Additionally, because a large part of the Postal Service’s business is derived from international markets, there’s a natural reason to raise their profile in Europe.

TALENT SCOUTS
Dan explains there are two plans in place when recruiting new riders for a decidedly “tour-oriented” team: “We look for real “team” guys, who are ready to be completely selfless riders and have the ability to bury themselves at the front all day long if necessary.. But it’s not just about joining the team to ride for someone else – Floyd Landis (who joined the team in 2002) worked hard and got 2nd at the Dauphine, then gave himself big time at he Tour.” US Postal also looks long term for talent that can win the Grand Tours after Lance. He points out that “this team was alive before Lance, and it will continue after Lance”.

“Mark Gorski (Managing Director of Tailwind Sports cycling division) handles most of the rider negotiations. When we started, we signed some key international riders who knew the races and knew the peloton. Signing Eki (Viatcheslav Ekimov) in the early days was key to helping establish the team in Europe, he’s a very international guy.”

THE JOHAN FACTOR
A turning point for the US Postal team came in 1997 when they hired Lance, and also a young directeur sportif who had only just retired from racing the pro ranks himself, and who had no proven skills as a directeur – Johan Bruyneel. Dan explains that “Johan is very logical, very detail oriented, and he came equipped and prepared to run a team. He re-energized everybody. And he and Lance had a relationship – which I’ve since learned is very unique and special. They are both strong individuals, but they understand each other and connect so well, they’re almost like their own team within the team.”

ON GEORGE
Arguably it’s tough to develop one’s own list of wins when your team is built to win the Tour and you’re not the leader, but we North American’s really root for George Hincapie during The Spring Classics. Dan says: “For George, that one win is going to open the door for many more. Roubaix is too tough to make it your one focus of the season, but he’ll win it one day.” Dan has complete confidence that George will also win any of the tough early season races like Flanders, Liege, even Sanremo. 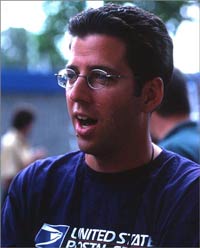 THE LION SPEAKS
It was recently reported by Procycling that Mario Cipollini said about Lance: “I’ve lots of respect for the Texan — he’s a great champion,” said Cipollini. “But the truth is that he only races for three weeks in the year. I’m out there competing at the limit from February to October…”

As any PCN reader knows, “Lance did his busiest , longest season in 2002. He trains harder than most riders, and wins a lot of races, Midi Libre, Dauphine, his 4th Tour, 4th at Amstel, supporting George at Sanremo…” points out Osipow. The results speak for themselves that Lance is no one-trick pony. But then, Mario is also a master of PR, he knows exactly what and when to say it to ensure he’s always in the headlines. When El Re Leone is not racing, and the lines of newsprint get a bit thin, it’s nothing a little retirement announcement or swipe at the Tour champ won’t cure… Dan has nothing but respect for the World Champ: “He’s a unique guy, incredibly charismatic, a great athlete, and he’s great for the sport. The sport could use ten more Marios…”

MEMORABLE MOMENTS
Dan admits that after 12 years with the organization there are too many great moments to recall, but one that stood out happened during the 1999 Tour… “Lance had just won the prologue and ridden his bike back to the team truck – everyone was there, waiting to celebrate and congratulate Lance. So after a bit of this we decided we’d better head back to the podium for the presentation, and I was walking back with Lance, and there were people everywhere saying hello and congratulating him., so it took a little longer to get back… We made it to the gate behind the stage and I could see one of the top Tour officials there on the other side, I know him a bit and he was a pretty friendly guy. So I say “well, what do you think?” His reaction is to start screaming at me! We were late for the live television feed of the jersey presentation… Then it dawns on me that we’re in the big leagues now and this is the Tour! It was pretty embarrasing and showed our ignorance at how the whole thing (Tour) worked, but we didn’t make that mistake again..!”

Another thing Dan is extremely proud of is his extensive personal involvement in the creation of the San Fransisco Grand Prix – an event owned by Tailwind Sports. As a long time resident of the city by the bay, “The SFGP has been a very satisfying personal time for me… It took 2 years to get it going, I personally designed the course, met with the mayor and other officials, and kept pushing for the event until it became a reality. Now, to see 500,000 people there, watching this race…” his voice trails off as if he still can’t believe what he’s done to create America’s premier one-day race.

SO WHAT?
So thanks a bunch Dan – we really appreciate your time and allowing us a glimpse of another side of pro racing. Best of luck this year to the whole team!

Check out more about Dan and the US Postal Team at their websites:
www.tailwindsports.com
www.uspsprocycling.com