Riding at the elite level, being paid to compete against the best riders in our sport is something most of us dream about but few actually achieve. Being selected to represent your country at the World Championships is rarer still, even for the pros.

Mike Sayers rode in 2002 for US-based Team Mercury, and in September got the call to represent the USA at Zolder as part of the elite national road team. At 32 years of age, Mike is not considered a “spring chicken“ in the peloton, but over his career has had his share of success. And although not designated as one of Team USA’s “protected” riders, the Worlds was one achievement he is most proud of. We talked with Mike recently about this amazing experience, and learned among other things, that beyond being a genuinely nice guy, Mike is a “genuine” person. 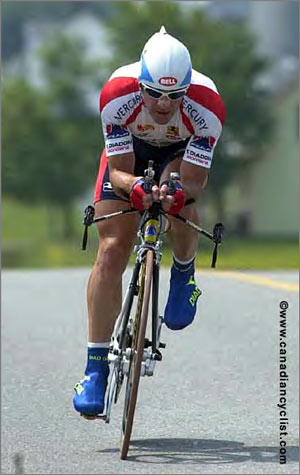 PCN – What was your athletic background and what got you interested in cycling?

MS – I originally got my start in Alpine skiing and competed from age 6 to 18. I lived in Squaw Valley and use to see the Plymouth-Reebok team train and that got me interested, as I knew I would never go a long way as a skier. I bought my first bike, a Rossin, in 1989 after watching Greg Lemond win the Tour. I moved back to Sacramento and was persuaded to race as a Cat 4.

PCN- You started out as a Category 4 in the US about 10 years ago, and now you have just raced your first World championships. What kind of feeling of accomplishment does that give you?

MS – It gives me a huge sense of satisfaction. Especially, since there is a stereotype associated with cycling that to be a professional, you need to start as a junior.

PCN – What are your strengths on the bike? 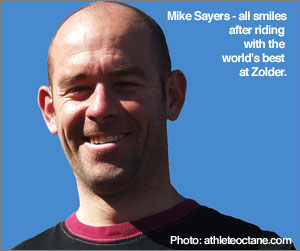 PCN – Your first real experiences racing in Europe were in 2001, what was that like for you?

MS – I was sent to Europe to race the spring campaign, but I had a bad year, in that I was really out of my comfort zone. I had my first major crash where I really hurt my back. I did a series of races in bad weather where I didn’t know the course, nor the riders. The environment was so shocking. And I didn’t have the natural ability to fall back on. But, out of that experience, it taught me so much about myself that I applied this year.

PCN – What happened in the crash?

MS – It was the Tour of Flanders, and my job was to take care of Leon van Bon. The day had actually been full of mishaps that just ended with the worst possible one. Both of us had already crashed in the race, and we’d been chasing back over about 20km, which included several bike changes, than we got stopped by a train…

So finally I found myself holding on to the team car getting a bike adjustment at 70kph. We were following a Telekom car when they slammed on their brakes. We couldn’t stop in time. I saw the crash coming and let go of the car, but our mechanic was still holding on to my bike, so I couldn’t avoid anything. I got launched into the back of the Telekom car. It was a lot like that crash Davis Phinney had a few years ago…

So I was laying there with a dislocated shoulder, and our team doc was thinking I was dead… I ended up with some serious muscular back problems, that I struggled on with. I kept riding more races, but that turned out to be a bad immature decision, I should have stopped. As a result it took me much longer to heal than it should have.

MS – I was having a good year, so word was around that I was riding well. I was really determined to have a good season, rebuild my career, or call it quits. I thought Zolder was a course that I could do something on.This year was all domestic racing. We (Mercury) had to back off a bit in order to grow back into the Euro program. I wasn’t able to use last year’s experience this year – a bit disappointing. I had to do a lot of my prep here, did not do much racing.

So I made a call to Steve Johnson at the US Cycling federation, asked if I could go and he said it was quite promising. As early as August… in my mind I was going to get selected, and that gave me the motivation to train extra hard.

PCN – What was the setup of the US team?

MS – The team was 10 guys, including the two designated leaders – Fred Rodriguez and Guido Trenti. We did have assigned jobs for the race. Chris Horner and I were to cover after 100 miles. Fred, Guido and Tony Cruz were there for the finish and everyone else was to help where they could. Och said the main objective was to do your jobs but finishing, for some of us, was completely secondary.

PCN – How was the quality of the US team compared to some of the other countries?

MS – We could have fielded better team, but the riders on the team were very motivated to be there I can tell you that. There were other teams sending their best riders with a lot of pressure to do well, they came fully locked and loaded. Especially the Italians.

PCN – When did you get to Belgium?

MS – Most of us got there the Wednesday before the race, and most of us were together as a team the entire time. We had the best hotel, right on the course, you could see it from our windows – it was a sign that the federation was serious about us. We worked together as a group – all levels juniors, Under 23, women, we rode together every morning, I rode w/ Horner as he was preparing for the TT.

Jim Och also wanted us spending as much time together as possible. It felt like a team.

PCN – How important is a “team” at the Worlds?

MS – Very – you have to organize it like you would a pro team, with guys who understand their roles and do their roles. The Italians get credit for making it a field sprint…they rode a great race. Big losers were the Belgiums.

MS – So fast…60K hr. – it took me 30 miles to get comfortable – faster than I’ve ever gone I tried to slip into a small group. Refused to sit in…my style is to attack.
I was able to handle the pace better this year, I trained really hard, my only downfall was my lack of racing. It was the most incredible race I’ve ever been a part of. It was so fast it was “oh my god fast…!” I kept saying we cannot handle this pace – but we did.

I wanted to try and do something, I’m gonna race until I can’t race anymore. My attitude was to do well, but also have fun, have a great experience. Dropped out after about 140km – I was so tired… But I had a big smile on my face… I think I proved I can race in Europe.

PCN – Did any of the riders at the race make an impression on you?

MS – Guido Trenti left a biggest impression with me – he is a big time rider. He really wanted to be part of the team – doesn’t speak English, his father is Italian and his mother is American, and he usually rides with Acqua & Sapone. There was some controversy about his being on the team but he made it clear from the start that he was there to work for us. He hung out with us even though he didn’t speak English.

He got into a break with Bettini & Museeuw that could have stayed away if Bettini wasn’t under team orders – he impressed me with his motivation.

PCN – Where do you see the current state of US cycling?

MS – Steve Johnson is good for the US Cycling Federation as he was using 2002 to build, to get a feel for himself on how it works. I think you’ll see more top riders in years to come. I absolutely believe Steve has made a huge difference to the federation – he was on other teams, in other federations, he is a guy who can take US cycling to the top of the world.

MS – Currently, from a cycling perspective, I have no job. I am searching, but a lot of riders, both here and in Europe are in the same boat. My personal life is the best it’s ever been. I just moved to Tucson, bought a house and have support from a wonderful person in Nicole.

PCN – What point in your career do you feel you are at?

MS – I feel like I’m only midway. After this year I know I have a lot in the tank and a lot to give.

PCN – What can you contribute to a team?

MS – I will ride for riders I believe in and will contribute to a lot of wins. My strongest thing is to be a good teammate & good rider. I’ve never really been in a position to win –I’ve always accepted what the team has wanted me to do.

PCN – What would you be doing if you weren’t a professional racer?

MS – I would probably be a high school teacher. My teachers we younger guys who made school fun, I would like to do that for someone else…

MS – Here, you can be whatever you want to be, a lawyer, a doctor, America is the land of opportunities. But in Europe – you’re born into your destiny – so pro cycling allows guys to improve their situation – there is maybe a bit more desperation there.

PCN – Is the doping situation getting better or worse?
It’s better – I think it’s getting significantly better – I can only speak of my own time in the sport. I hear that 1997 was the fastest races, so many riders showing up and wining like never before. Now we’re seeing more of the established guys winning , Lance, Jan – when those other guys fall out of the scene you have to question some things.

PCN – How will you be spending the Winter?

MS – I just bought a new house with my girlfriend Nicole – and we’ve been working on it. Putting it together, setting it up. I’ll also do a little “normal” work – maybe in retail, I like to get out in the public speak with people who know nothing about biking. I try to do one new activity every year – so lifting weights, yoga – this year I’ll try swimming, a new off season project. It’s all about having fun. Lots of hiking, and then get back into riding in the next few weeks.

PCN – Do you use this time to exercise any indulgences that may be off limits during the season?

MS – (laughing) Food and drink… there’s a new Belgian brewery nearby – so my partake of beer has increased 100 fold and I’m enjoying it. It seems to go well with my favorite snack food: Kettle chips w/ salt and pepper !

Kelme to Botero “You Can’t Leave”