US Postal’s Max Van Heeswijk is flying this week at the Ruta del Sol. He’s bagged two stage wins so far, beating the likes of Oscar Freire and Erik Zabel. We talked with Max just after the January training camp, as he was looking forward to some racing… 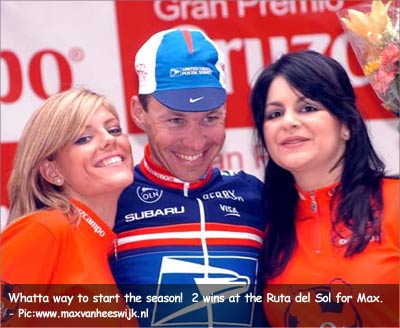 Both of van Heeswijk’s victories came in mass sprint finishes,
topping the likes of Oscar Freire (Rabobank) and Erik Zabel (T-Mobile) on Monday and Nico Mattan (Relax-Bodysol) and Peter Van Petegem (Lotto-Domo) today. Yesterday’s stage winner, Juan Carlos Dominguez of the Saunier Duval team, continues to lead the race with just tomorrow’s final stage – a 186 km race from La Zubia to Almeria – remaining. In the general classification, Benoit Joachim leads the way for the USPS team in 15th place, 1:01 back of Dominguez, while van Heeswijk holds a nine point lead over Freire in the points competition. 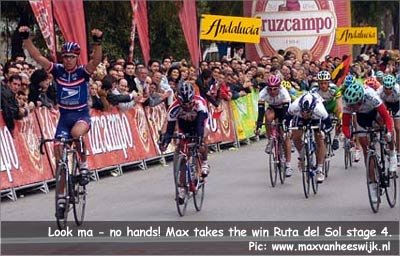 The PEZ Quickie Interview
After his inaugural 2003 season with US Postal/Berry Floor, one fraught with good results and one very unfortunate slip on the pave at Paris-Roubaix, Max is looking to build on his previous successes and help out the Postal squad in a big, big way this season. From the streets of Philadelphia to the cobbles of Arenberg, Max, a pro since 1995, is true hard man of cycling. Ranked 118th by the UCI at the time of print, Van Heeswijk sets off for a tough schedule in 2004.

Max took some time out to answer some of our questions regarding the team, the new guys, his schedule, and his home country, Holland.

Pez: How are the new young guns fitting in on the US postal roster?
MVH: They are adapting well and can keep up.

Pez: Do you look forward to working for George Hincapie?
MVH: I think that we can support each other very well in the finals.

Pez: How much pressure does the Dutch press put on their stars to win?
MVH: It’s not too bad, it depends how you react under the circumstances. You put the pressure mostly on yourself.

Pez: Does he think (guys like) Boogerd suffered from too much pressure too early?
MVH: No, he puts the pressure on himself by calling himself the Favorite in some races

Pez: What is the best part of Holland that cycling fans should visit and why?
MVH: The South of the Limburg province, beautiful hilly area with little traffic on the smaller roads

Pez: Are the big name Dutch riders a tight knit group? Are you friends and do you train with Dekker and Boogerd?
MVH: Friends is a big word, because you only have a few good ones in your life. I get along fine with them and train often with Servais Knaven, Jeroen Blijlevens, Erik Dekker, Jan Koerts, Tristan Hoffman etc

PEZ: How do you feel at this point in the season? Good legs?
MVH: I feel fine but have still to race my first race

PEZ: What kind of DS is Bruyneel? Is it easy to work for him? Does he motivate?
MVH: Bruyneel is a very motivating team leader; he can read the course very well and plot strategies.

PEZ: Which rider did you idolize as a kid coming up through the ranks?
MVH: Frankly, I had no idols before my 16th birthday because I did not race yet. .After my 16th however: all winners of the Tour.

2. Own a pair of traditional Dutch clogs?
MVH: No

3. French Fries or Belgian Frites?
MVH: Neither one… well a palm

Thank you for your time, Max, and best of luck this year from Pez Cycling News!

T-Mobile: On the Road to Athens