What happens if you’re a young Aussie pro, you get a contract with a UK team but it doesn’t work out ? If you’re Pete Smith, you go back to Aus, enjoy some decent barbies, have few brews, get a tan then head back to France to try again. Despite some sterling team work by the young man from Melbourne he wasn’t retained by Raleigh for season 2011; PEZ had a word with him about the UK pro scene and his plans for 2011.

PEZ: Where are you from in Australia? What’s it like?
Pete Smith: I was born in Perth but we moved to Melbourne before I was one so I consider my practical roots to be here. It’s a thriving city and I love it, though living in the middle of it means a lot of traffic lights on the way out training but you get used to it. The best thing is the variety of training back here. You can find long flat road along the coast or head inland and find climbs as good as anywhere. Summer here is hot and dry, which can make training a little uncomfortable at times, but I’ll take it over the British snow any day! 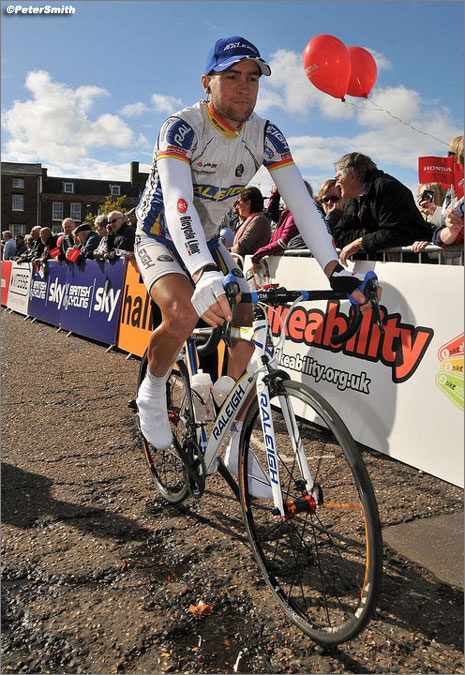 PEZ: Did you come out of the AIS track programme; what are your palmares ?
PS: I’ve never been affiliated with the Australian development programs. I think I came into the sport a little late for that. They tend to scout their charges from the junior ranks and I didn’t have a road bike until I was 19, so I guess I missed the boat on that one. I don’t think it hampers your potential too much, it’s just a different road that’s all.

I’ve managed to have a few successes thus far, I suppose it’s just a natural progression. I started off down at my club learning the in’s and out’s of racing there, then started with the state open races, eventually winning a couple, and on to the national road series. I’ve also been lucky with a few starts in international tours like the Tour of New Caledonia where I had the Espoirs jersey for a while and finished 5th on GC (2nd Espoir). Out of that I was offered a ride in the Herald Sun Tour which was my first taste of professional racing- a baptism of fire to say the least! 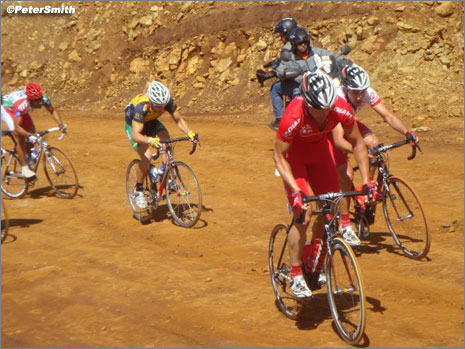 Smith suffering through a hard dirt climb at the Tour of New Caledonia.

PEZ: Why did you decide to come to England rather than Belgium, France or Italy ?
PS: Once I had graduated from university in 2009, I wanted to get abroad and see if I could make something of a career. I tossed up for quite a while about where to go, and had a few little offers in France and Belgium. Then after talking to a couple of friends who rode for the Rapha Condor Sharp team, Darren Lapthorne and Tom Southam, I started considering a season England where they said the scene was really growing. It seemed like a good place to start; on the doorstep of Europe and without a language barrier. 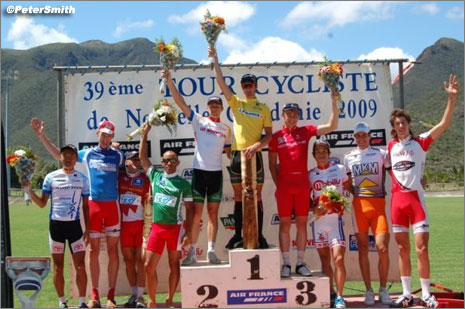 A spot on the final podium at New Caledonia was a nice reward for the suffering.

PEZ: How did you get the Raleigh contract ?
PS: That was more of a “who-you-know”. My CV was given to the manager of the team, who was still finalising the roster and keen for a couple of foreign riders, and it all just fell into place really. It was clearly going to be a great opportunity to ride for a company with such a heritage in the sport so I took the chance as soon as it came.

PEZ: What were the good points with Raleigh ?
PS: The program was great. We had consistent racing all year, in the UK and throughout Europe. It really helped always having some decent races on the horizon to keep you motivated. But I think the best thing about the team was the group of riders that was put together. It was amazing to have 10 guys that had never raced together before immediately gelling the way we did. From day one it just felt more like a group of friends than anything else, and I really think it paid off throughout the year. It meant there was no competitive nature between the guys, and everyone was willing to do their bit for the team out on the road. And most importantly, no matter what happened in the race, we could all have a laugh together at dinner.

PEZ: And the not so good ?
PS: From a sporting perspective, it can be said that we didn’t get the results we should have, but I’m not going to make excuses for that, we did our best every time we got on our bikes. Aside from that there really wasn’t a lot of sour points about the team. Behind the scenes a few things were sometimes a little disjointed but being a new team I think that can be expected, and it certainly improved as time went on. The support we needed was there all year and I think all the guys were genuinely pretty impressed with how it ran. 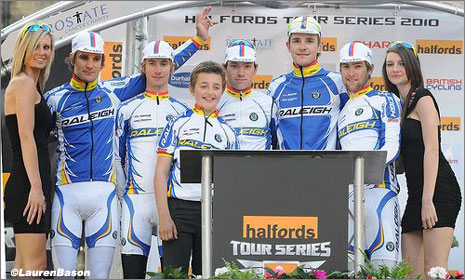 Peter enjoyed his time with the Raleigh team.

PEZ: Did 2010 go as you would have liked ?
PS: Personally this season probably didn’t yield as many results as I would have liked. Having said that though, being my first year in Europe I knew I had a lot to learn before the results would come. However, it was probably my most satisfying year. In most of the big races I found myself playing the role of Right-Hand Man to our team leader, Dan Fleeman. So regardless of where I was finishing, I could always go to bed happy knowing I had played a part in a lot of his great results. Now that I’ve learned the ropes a little bit though, and know what to expect, I’m hoping 2011 will bear some fruit.

PEZ: What did you think of UK road racing compared to Australian road sport ?
PS: To be honest I think I underestimated the UK scene a little bit. I think a lot of comparisons can be made between Australia and the UK in that both scenes are growing really fast. But what England has is a deeper pool of talent, which makes the style of racing much more aggressive. Because it’s so close to Europe a lot of the British riders will race there, bring good form back, and really make things painful throughout the domestic racing. What I also found really impressive was the number of teams in England. In Aus there always really only been 3 – 4 established teams that dominate the racing, with all the other riders racing individually. Whereas Britain has at least a dozen well supported teams that can get amongst it throughout the year. It certainly makes for a hard domestic scene.

PEZ: What about the UK weather ?
PS: Don’t get me started! First off, when I arrived in London at the start of the season I walked out into -5 degrees, having just left on a 44 degree day in Melbourne! To be fair, it did warm up slightly throughout the year, but I can honestly only recall one two week period in the UK that you could classify as a summer. And even then the best of those days are more like mild Australian winter days. So yeah, England’s probably not a place I would go for the climate. Whenever we went across The Channel though, we were blessed with great weather. Racing in 35+ degrees in Portugal and the Pyrenees was brilliant, but I don’t think the British lads enjoyed it so much. 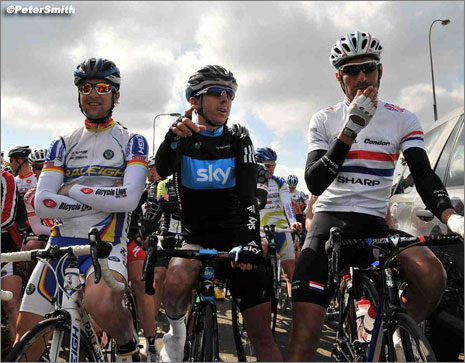 PEZ: France for 2010 – how did you get the ride ?
PS: I was helped out by a contact I had in France. He’s a race organiser who often helps foreigners land spots on teams over there and happened to get me a ride with CC Villeneuve St. Germain. I see it as more of a side-step than anything else. Although I had a ball in the UK this year, I think Europe is where I really need to be. Hopefully the move will pay off.

PEZ: Where are you based ? do you know the programme, yet ?
PS: I’m going to be living in the Picardie region, in a city called Soissons. It’s about 80 km North-East of Paris, and the team is based in that area. I’ve been given the provisional race programme and it looks great. The programme itself is more or less what really drew me to this team. The whole setup looks great, but we’ll be doing about a dozen really good stage races around the country, as well as a host of one-day races in France, Belgium, and Spain. So there looks to be quite a bit of varied racing which hopefully will give me some opportunities to perform well.

PEZ: What do you want out of 2011 ?
PS: Like most of the top amateur teams in France, the ‘Coupe de France’ series is a big priority. So I’d really like to have some good showings there. The same goes with the bigger stage races on our program. I’ve got my eye on a few where I’ll really try to peak and go well, and hopefully by the end of the season there will be a few wins on the board. 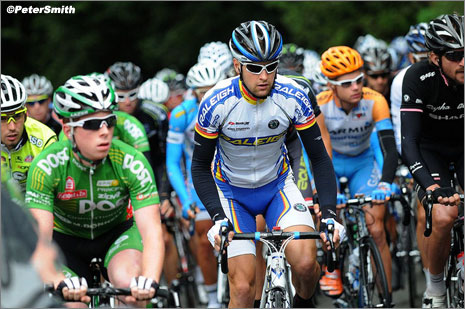 PEZ: What’s your ultimate goal in the sport ?
PS: I want to make it into the top ranks, to really find out what the sport is about at the pinnacle. And of course I’d love to make a good career out of it. But I can see now that I’ve come into the sport quite late relative to others, so there is still a hell of a lot to learn. Cycling being as fickle as it is as well, you just never know how it will pan out. So on the other side of the coin I’ve got career ambitions outside of the sport, and a Uni degree to fall back on.

PEZ: Finally: did you miss those Aussie barbies – how do the Pom barbies compare ?
PS: My one and only experience of a UK BBQ was at Liam Holohans house. I remember being quite happy when he said we were having ‘steak on the barbie’ for dinner because it was something I was missing quite a lot. When it came time to cook though…. Lets just say; a very small bucket, full of heat-beads and doused with lighter fluid, with a metal grate over the top does not create a bbq. Nor does it create a very good tasting steak. I didn’t request any more BBQ meals after that.