Rider Interview: Last week Dimension Data’s Steve Cummings doubled up taking the British road and time trial titles on the Isle of Man. Just over the sea in Ireland, Ryan Mullen did exactly the same; doing the ‘Champs Double’. Luke Maguire took the opportunity of a visit home to the Emerald Isle for a bike ride and a word with the Cannondale-Drapac rider. 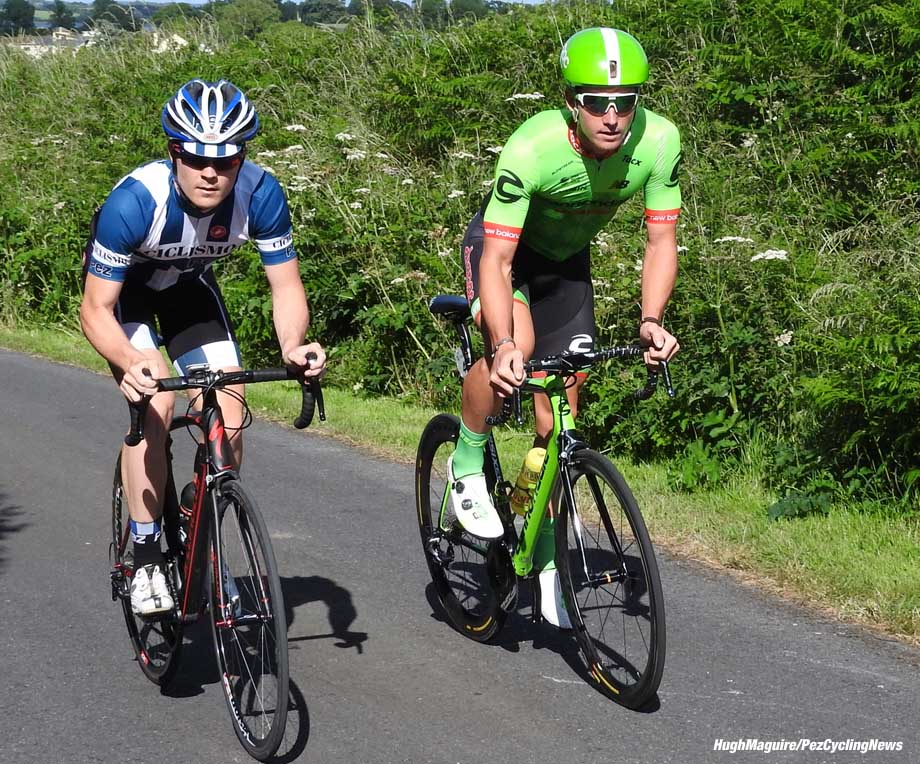 On the road interview – Luke Maguire and Ryan Mullen

It was the perfect weekend for Ryan Mullen who claimed two national titles in the space of four days. With his contract up for renewal and at least three other WorldTour teams interested in his signature for next year, the world is at his feet.

PEZ: So Ryan you’re living in Girona, born in Birkenhead and competing in your National Championships in Wexford, Ireland… talk us through that.
Ryan Mullen: I grew up in the UK but I had the Irish backround and passport so would have always considered myself Irish. I started racing at underage level for Navan Road Club at under-14 level. My Dad used to ride for them and he was good friends with the chairman PJ Nolan. I used to come over to Ireland every weekend on the ferry for youth racing here and then go back for school on the Monday. 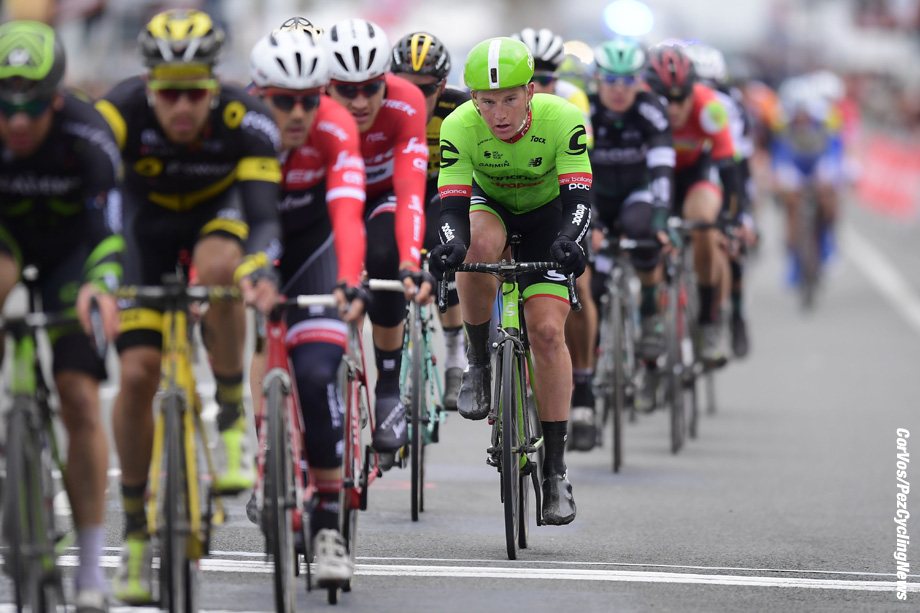 PEZ: You are still only 22 but you have been in the Pro environment from a very young age, has that been an advantage?
I would say not. I think guys that grow up on the continent have a huge advantage to people that grow up in the UK or Ireland. The level of racing is a lot higher in mainland Europe. In Ireland you have maybe five guys that can realistically win a race but in Belgium or France there are at least 50 guys who can do it so there is less pack fodder. The Belgians are exposed to that high level from a young age so they are more natural born racers. I don’t consider myself a natural born racer, I rely more on my brute force!

PEZ: You seem quite laid back in your approach, is that true to say?
I set realistic goals of what I think I can achieve. I feel like with the trajectory of my career so far that it will end up somewhere pretty high, so the plan in to keep working hard and to let that run its natural cause. 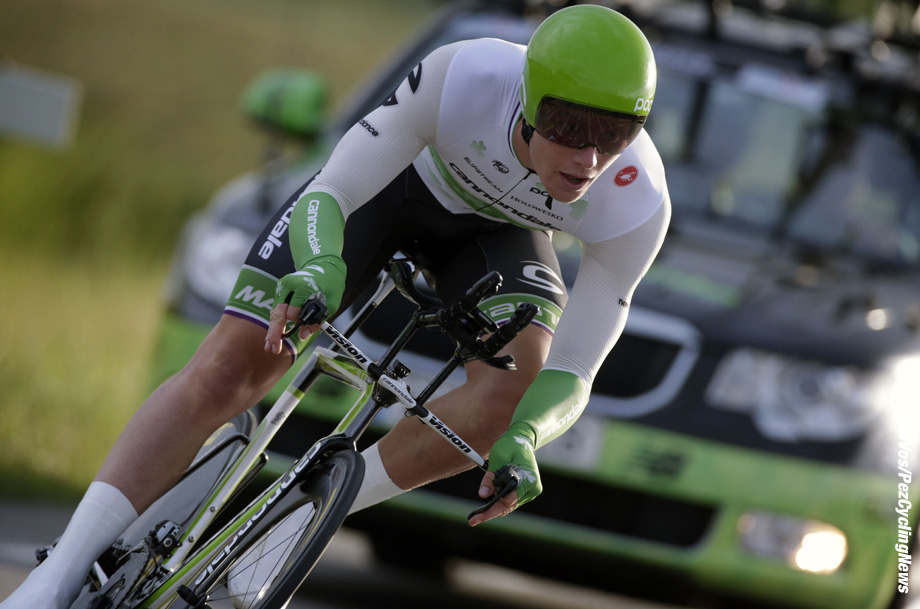 PEZ: You moved to Girona last year, how is that working out?
The Cannondale-Drapac service course is based here so if I have a problem I can just go down there and get a new bike or new parts, it is very handy. I still need to improve my Spanish but it can be difficult because there is a large expat cycling community there. That will be something to work on for next year.

PEZ: Many people were surprised by your 5th place in the World ITT championships last year – were you expecting such a good result?
No, not at all. Last year was a really bad season for me. I had a lot of health problems and I pretty much became anaemic. I didn’t find out exactly what was wrong with me until August so until then I had been getting my head kicked in at the races which wasn’t good for morale. In August we were able to fix the problem, I got healthy again and things just clicked. The form didn’t necessarily improve much but I put on a little bit of weight and just got back to feeling like myself again.

In the World Championships I didn’t expect to be anywhere near the top-10. If someone were to have told me that I was going to finish 15th that day I would have been delighted. Finishing 5th just gave me a huge amount of motivation all through the winter. I always knew that I was capable of performing at that level but it was nice to be able to confirm it. 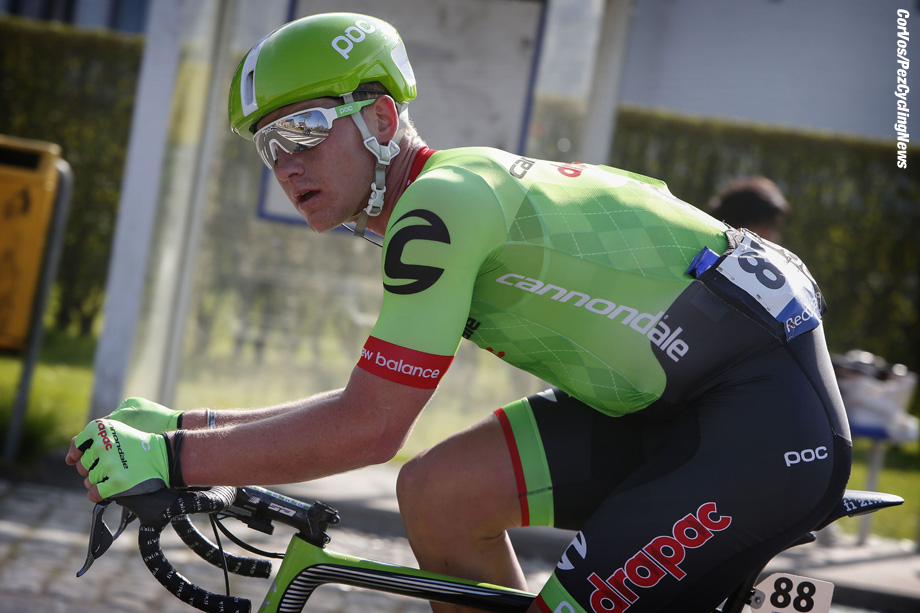 PEZ: A lot of young riders particularly feel pressurized to lose weight and it goes badly, was that your case?
Yeah but that wasn’t an issue for me really… I never took supplements before, I used to think “what is the point, I don’t need them”. But when you move up to World Tour and your training and racing volume increases you really notice it and your body gets really run-down. I was trying to lose a bit of weight during the winter but I wasn’t starving myself. I was still eating three meals a day with snacks thrown in. I was weighing my carbs and stuff and then I got to August and thought “What the fuck am I doing? I’m 83 kilos why do I need to bother weighing my food?”. Climbing is not my thing and I never want it to be my thing. I’d rather look like a man and get some attention at the bar than look like a weird skeleton child!

PEZ: Obviously there is a fine line between supplements and doping… where do you stand on this?
For anyone who wants to know – what I take is a liquid sachet of iron. In my team at least doping is a big no-go. That sounds rich because every pro rider says that. I can only speak for myself but as far as I can see it’s not an issue in my team. There are clearly other grey areas in the sport at the moment regarding things like TUEs but I don’t know enough on the subject to really comment on that. 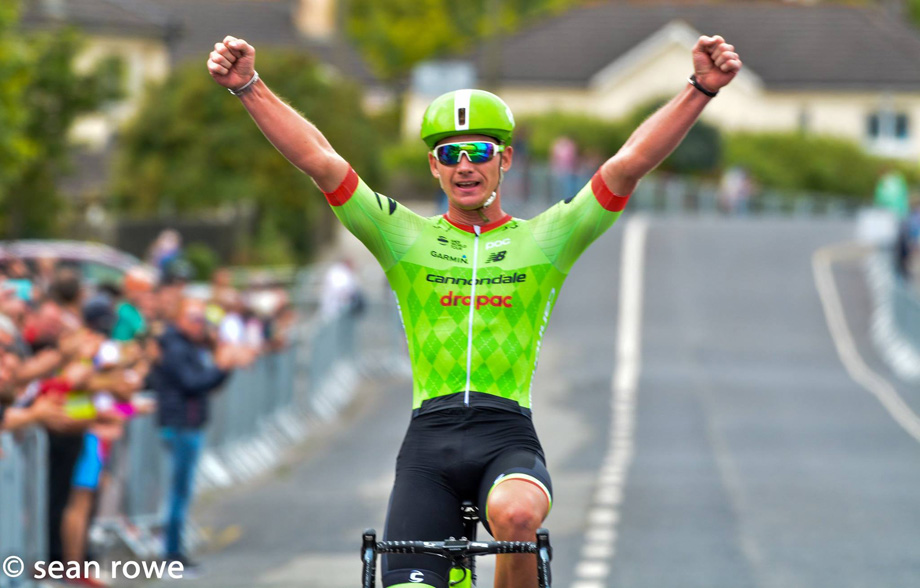 PEZ: Did you expect to win both titles this weekend?
My goal was the same as every year. Give it all for the TT and then just ride around the road race to burn a few calories. I actually considered pulling out of the road-race half way through it because the racing was so negative. But to be able to wear the national bands on the jersey again will be very special.

PEZ: Your contract with Cannondale-Drapac is up at the end of the year I believe?
Yeah, I still haven’t been offered a renewal but this is the first time in my career that I have been in this situation so I don’t really know how it’s supposed to work or when these things happen. I work with my agent Andrew McQuaid so he handles a lot of that stuff. 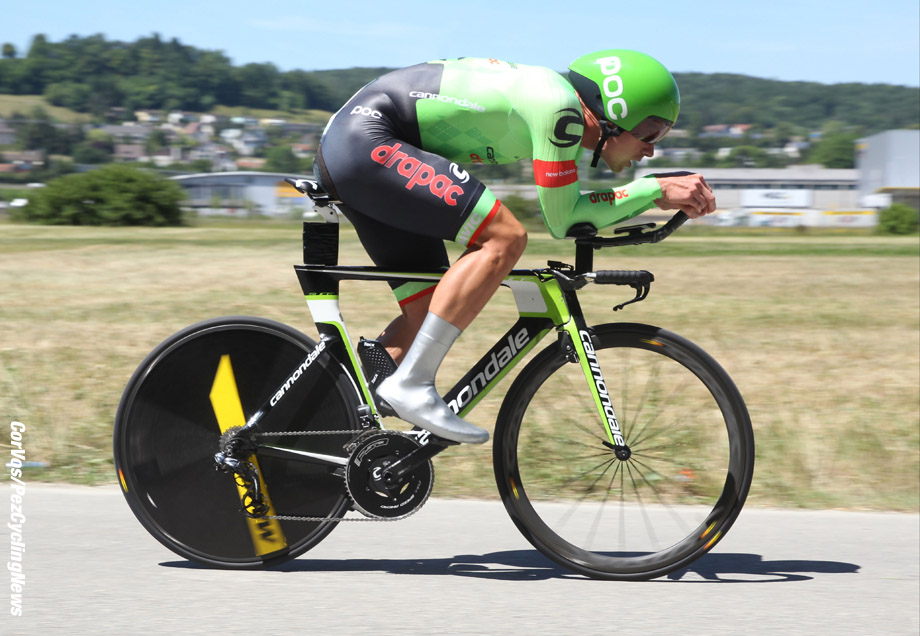 PEZ: Your still in the early stages of your career but are there any long-term ambitions?
I just want to be World time-trial champion one day, hopefully in the next three or four years. I believe that with the right equipment and environment it can happen. There are not many twenty-two year olds getting top-tens in the WorldTour TTs so in that regard the future is bright.

PEZ: Is there anything you can learn from the older guys?
(Laughs) To be honest I teach the guys on my team how to do it so at the moment they’re the ones learning from me. Obviously you can always improve a bit on your pacing and aerodynamics but I think the biggest gains these days can be made in your equipment. There are huge differences in the level of equipment between the top teams so if you get stuck in one of the lesser teams then you are in trouble. It used to be that the strongest guy won the TT but now it has almost come down to who has the best bike. Everyone is doing the same amount of training, resting and eating so the difference all comes down to the investment in the bikes and spending time in the wind tunnel. 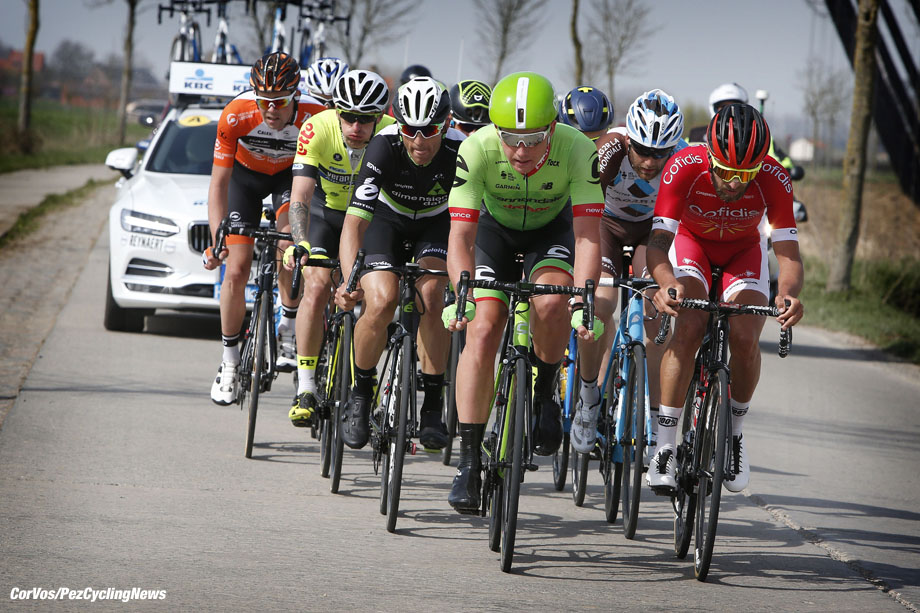 In the split of Gent-Wevelgem 2017

PEZ: Can you see yourself staying in Spain?
Yeah definitely, it’s a really nice community atmosphere in Girona. It is full of pro cyclists and everybody knows everybody. It is nice to come back to Ireland though and be a normal human being outside of the cycling bubble. It is nice to be able to go out for a ride in the sunshine and have a few beers by the beach as well, you don’t get much of that in Ireland. 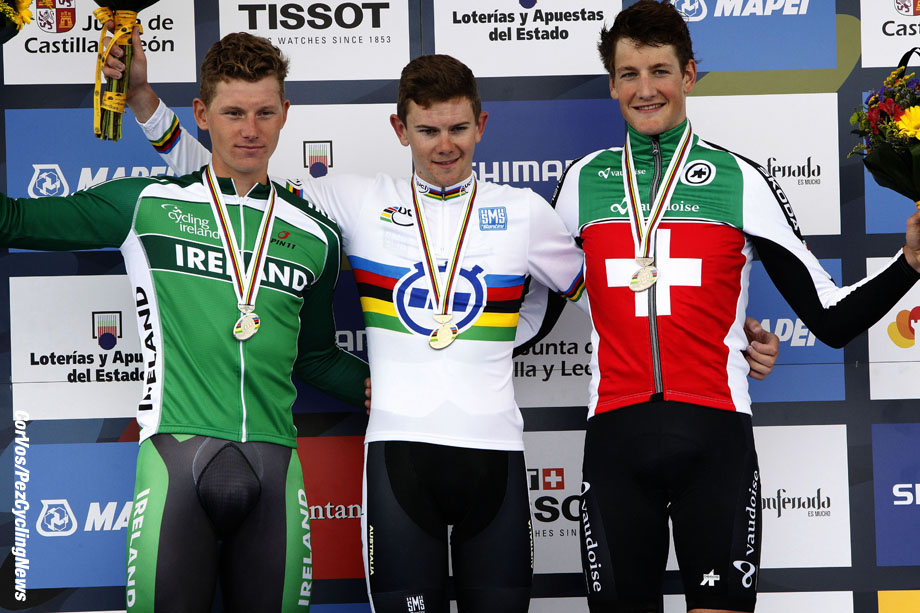