Whilst Astana make all the headlines in Castilla y Leon, up at the Coppi e Bartali it’s ISD who have taken charge with a clear, 17 second win in the TTT. PEZ spoke to the man who now lies second overall, Great Britain’s Ian Stannard, after Kuurne-Brussels-Kuurne.

At only 21 years old, Englishman Ian Stannard, has already seen a fair bit, and this year he stands to see even more. He spent 2008 with hardcore Flemish team, Landbouwkrediet, but this year he’s with Tuscans, out of the Ukraine, ISD. He spoke to us a day or two after Kuurne-Brussels-Kuurne and gave some insight into two very different worlds.

For the Belgian teams, Het Volk is the start of six weeks which are the core of their season; after Roubaix nothing is quite as important. For the Italian squadra it’s different; San Remo is crucial; but there’s a full season to race after it, with regional tours and semi-classics all through the year. Young Ian Stannard is in the unique position to see a season from both sides of the fence.

PEZ: Were you happy with your weekend in Flanders, Ian?
Ian: Yeah, it was OK, I wanted to do a bit better but Gent was only my second race of the season. I felt better on Sunday at Kuurne, getting back into the swing of it and now that I’ve recovered I’m feeling the benefit of all that racing. 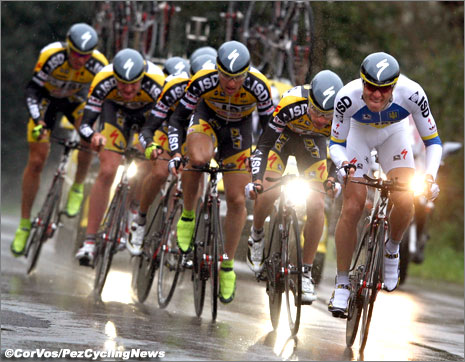 Ian Stannard’s ISD team wasn’t a huge factor in the first round of Northern Races, but they did take a huge Stage 1b TTT victory yesterday at the Coppi e Bartali in Italy.

PEZ: What was the ISD game plan?
Ian: To get round! Perhaps put someone in the break, I don’t think they knew what to expect, really.

PEZ: Have you got your technique on the cobbles sorted out?
Ian: I’ve raced in Belgium since I was an under 16; you just pick it up as you go along – personally I enjoy riding the cobbles. There’s not really a secret, you have to be relaxed, but I think you just either love them or hate them. If you hate them, I think you tense up and are more likely to crash; but I guess it’s OK for me because I’m big, if I was a little guy bouncing around on them, then maybe it would be different!

PEZ: I believe it’s pretty savage running in to the climbs?
Ian: Yeah, there’s a big scrap for position as you approach the important sections; but you just have to look for the gaps that aren’t there and go for them! One of our guys is a neo pro and that was only his second race; he didn’t know what had hit him!

PEZ: Two days at 200 K – pretty hard on the system?
Ian: The day before Gent, I didn’t manage out on the bike, just the way my flights were and there were no rollers to go on, I only had a massage and felt pretty crap. The next day, I felt much better; I got into the flow of Belgian racing again.

PEZ: Your first pro experience was as a stagiaire with T-Mobile?
Ian: That was an awesome experience, the GB set up is good, but it was at a different level again with T-Mobile. When I went to Landbouw, it was a big step back in terms of organisation. 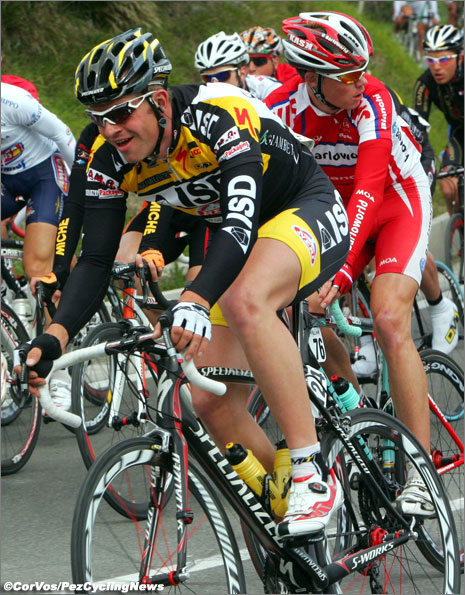 PEZ: Landbouw/ISD, what are the differences?
Ian: At Landbouw you had to fend for yourself a lot, it’s a small team but it’s been around a long time and the programme was good. But the Belgian season looses momentum after Paris – Roubaix. The Italians are more meticulous, they take more care of the bikes for example – and the riders!

PEZ: Do you prefer to race in Belgium or Italy?
Ian: I love Belgium, the cobbles, the scraps for position, the weather – but Italy is cool; they’re totally different, you can’t compare. I live in Tuscany, which is really nice.

PEZ: How did you get the ISD gig?
Ian: Through Max Sciandri; it’s a good set up, all the riders live in Tuscany, so it’s perfect for team training.

PEZ: Does the Ukrainian influence show?
Ian: No, the sponsor is in the Ukraine and there are Russian and Ukrainian riders, but the management is Italian and that’s how the team feels – Italian.

PEZ: You were a handy Madison rider with U23 madison wins, will we ever see you in a six day?
Ian: Maybe, in the winter, but for fun, I’m not really interested in the track anymore. I enjoy it now and again, but it’s too repetitive; my future is on the road.

PEZ: You won’t be capitalising on those two European team pursuit championship wins, then?
Ian: It was good at the time and it was part of what I did with the GB Cycling Academy; but apart from anything else, I don’t think I could go at the speeds you have to, now! 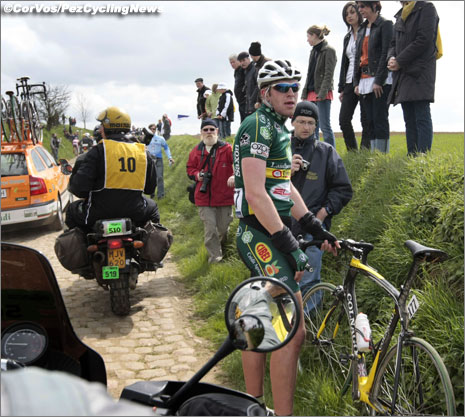 Stannard did some good time with Flemish outfit, Landbouwkrediet.

PEZ: You used to be a handy ‘cross rider too.
Ian: It was something I used to enjoy, but it was mainly a reason to ride the bike in the winter, for training.

PEZ: You were third in the ’08 Tour of Britain – could you have won?
Ian: I was there for stage wins, really. It’s all very well saying; ‘what might have been,’ but I was third overall and happy with that result. The team hopes to ride it this year, along with the Tour of Ireland – it would be good to go back with a strong team and try to win this time.

PEZ: SKY – has Scott Sunderland been on the phone?
Ian: No, but it’s something I’d be very interested in, obviously. With the organisation that British Cycling has, behind it, it’s going to be a strong team.

PEZ: What’s the programme now?
Ian: I was meant to ride the Eroica, but I won’t be. Unfortunately we’re not in Tirreno or Paris – Nice; so it’s going to be a lot of good hard training between now and my next big race; Milan – San Remo.

We’ll see you there, dude!

With thanks to Ian for his time and patience.

PEZ On The Prowl: PEZ Does Milano!