By Edmond Hood On Jun 27, 2018
Share
Like PEZ? Why not subscribe to our weekly newsletter to receive updates and reminders on what's cool in road cycling?

Rider Interview: Krists Neilands has been showing off the Israel Cycling Academy and the Latvian National champion’s jersey at the pointy end of the peloton since the start of the season – will he be part of the WorldTour in 2019. Ed Hood spoke the hero of the Primavera after his recent win in the Dwars door het Hageland ahead of some big names. 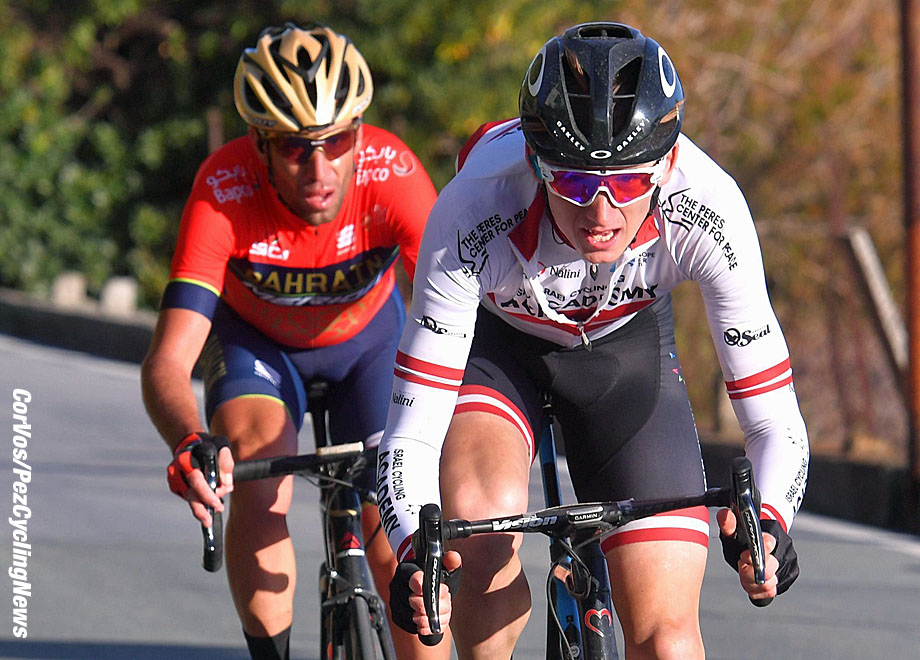 Remember Nibali’s magnificent win in the Primavera? And that guy who lit the blue touch paper on the Poggio and who Vincenzo bridged over to? Krists Neilands was the man who made that first move but he couldn’t quite hold on to ‘The Shark’ who used his famous descending skills to add the ‘Primavera’ to the ‘La classica delle foglie morte.’

However, the Latvian Elite Road Race Champion pulled off a big result of his own recently, winning the tough UCi 1.1 Dwars door het Hageland in the grand manner, solo, holding off a rampaging chase group headed home by Quick-Step fast man, Elia Viviani. 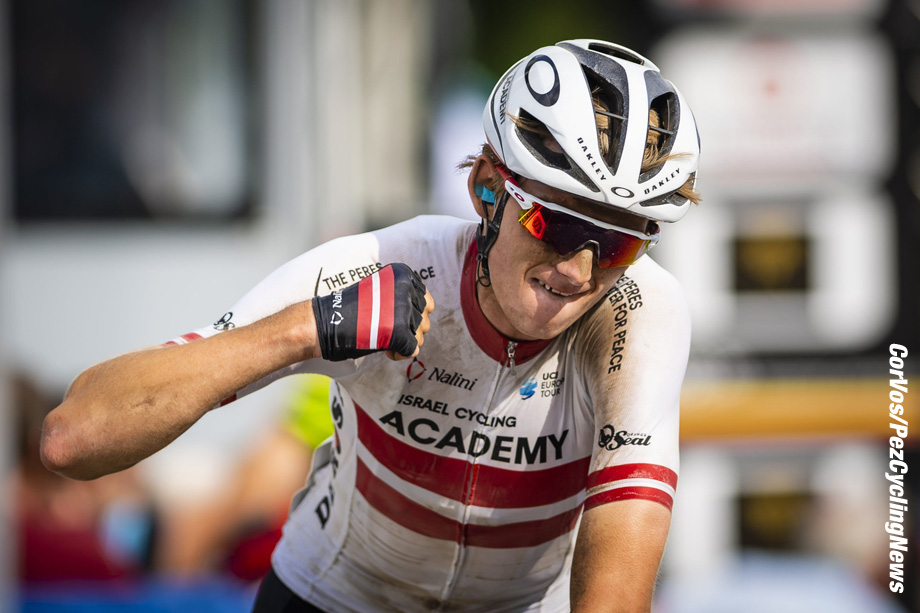 Neilands first appears on the radar with a win in the junior Tour de la Region Lodz in Poland in 2012, riding the European and World Junior Championships. In 2013 he was with Latvian continental team Rietumu Delfin. He rode the Tour de l’Avenir and Worlds and there was a podium spot in his u23 National Road Race Championship. Still with Rietumu for 2014 he took the National u23 TT title and rode the u23 Worlds. In 2015 he defended his title, rode the u23 Tour of Flanders and won a stage in the far flung Tour of Borneo. 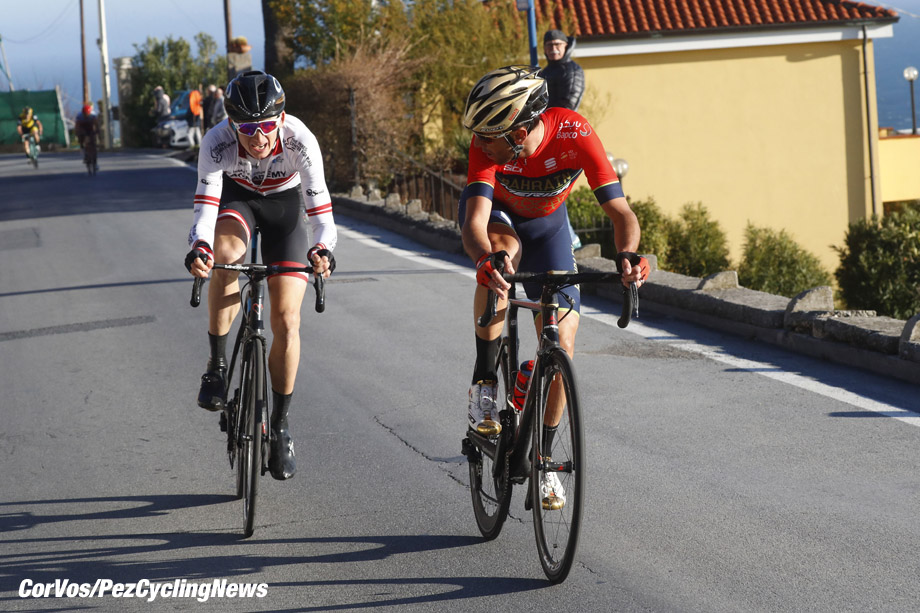 There was a third TT title in 2016 but now the name on the jersey was Axeon Hagens Berman and there were rides in top US stage races, the Tours of California and Utah. On the European stage he was top 10 in both the u23 Tour of Flanders and Liege-Bastogne-Liege. Last year he stepped up to pro continental level with the Israel Cycling Academy taking the National Elite Road Race title and finishing as best u23 in the madness that is the Volta a Portugal. 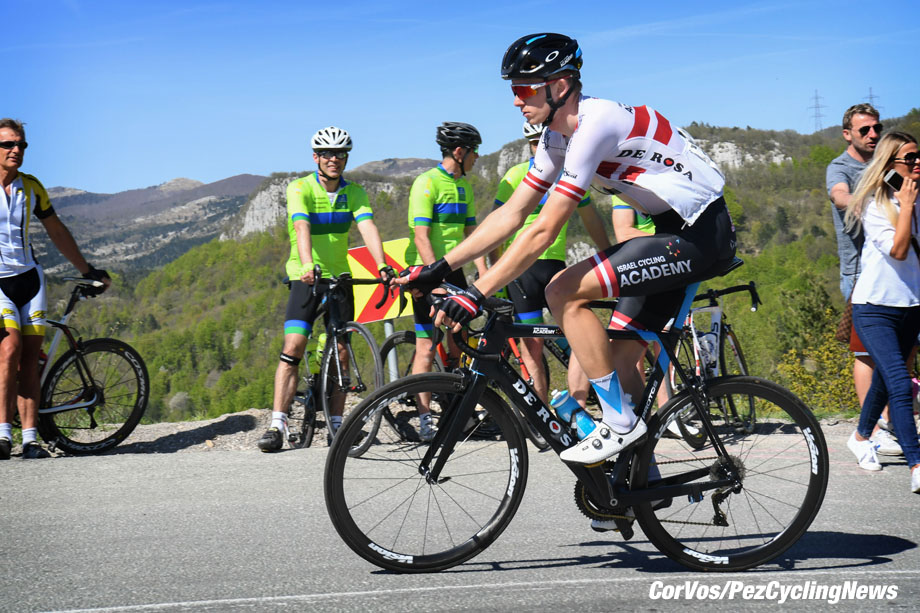 This season, apart from his strong showing on the Poggio and win in the Hageland he’s had a top 10 in the Herald Sun Tour, ridden the Amstel Gold and his first Grand Tour – the Giro. High times PEZ ‘had a word’ with the skinny man from Kuldiga. 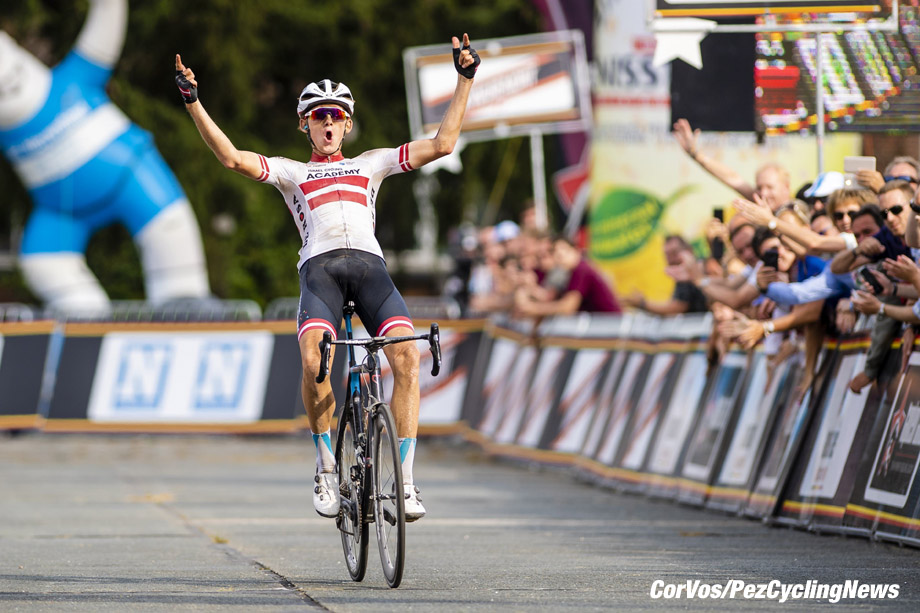 PEZ: Congratulations on your win in Dwars door het Hageland, Krists; the race has an ‘interesting’ parcours, doesn’t it?
Krists Neilands: Thank you! Yes, the parcours were cool, I’m feeling really good on these kind of roads, the off-road dirt and gravel sectors and cobbles are one of the things which I really like to do in this sport. These kind of roads make a big ‘mess’ in a race and that’s why you never know what can happen, for example me, I had three flats tires during the race but still was able to win. 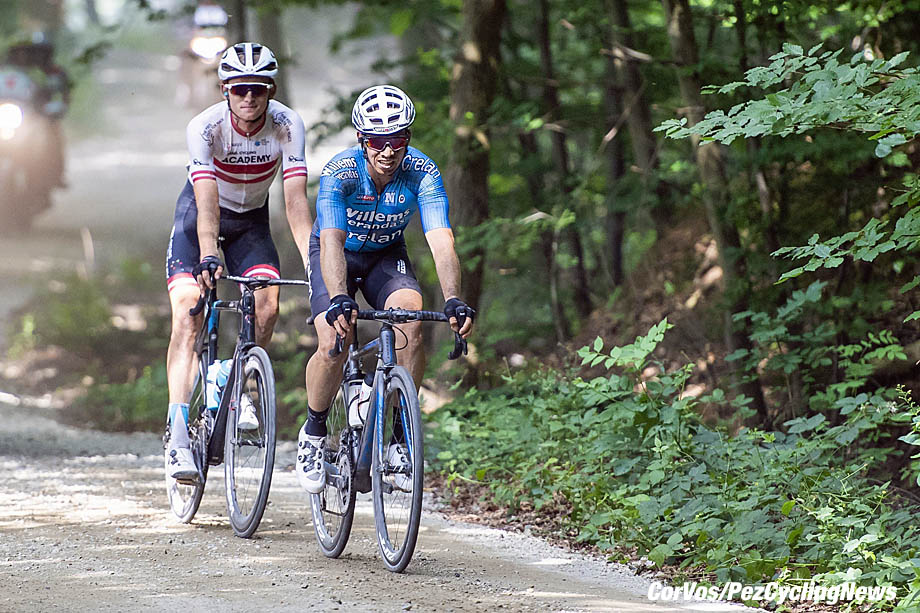 PEZ: Tell us about how you won, please.
This was my first race after the Giro d’Italia and the first hour was quite hard for me; I couldn’t find my legs, but as the race went on I felt better and better. On the road there was a big ‘mess’ with a lot of riders getting dropped and a lot of riders attacking; with some 70km to go I was in the front with other 15 guys – then with 50km to go I saw Sean De Be attacking and I just followed him. We worked together well, everything went smooth until he got a flat tire, then I was on my own in the front; but some 500m later I got a flat as well. I thought the race was over for me but luckily we changed the wheel fast and time gap went down but I still had 25seconds. It happened 20km before the finish line, after the wheel change I was just thinking – ‘ALL or nothing,’ so I gave everything from me to get to the finish line before others. 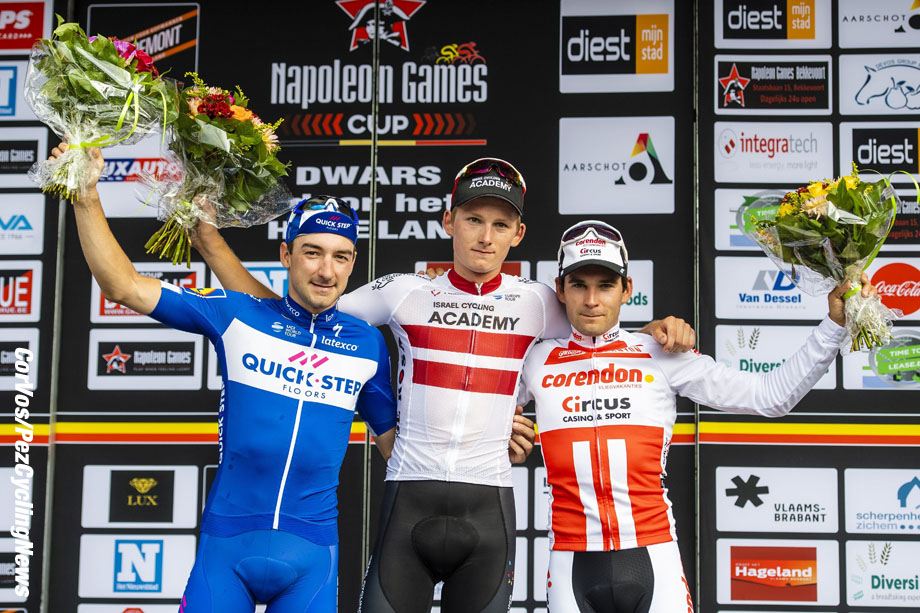 PEZ: Do you think your current form perhaps comes from riding the Giro and recovering well from it?
I think for sure the Giro gave to me some better legs; that’s just normal. 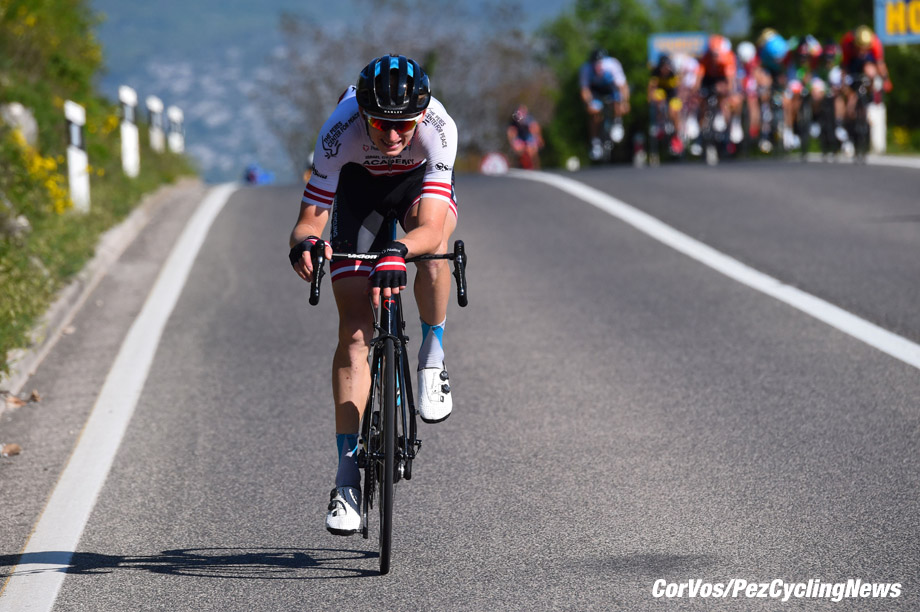 PEZ: And the worst?
The worst probably was one of the first days in Italy, because I got some stomach problems and I was suffering a lot for a couple of days.

PEZ: How did you get into cycling?
I already just loved to ride the bike when I was a kid, and when I was 10 years-old I went to my city’s sport school and started training in cycling. Then when I was 14, I went to Sports Gymnasium where you just focus on cycling, five years were spent there and then after juniors I got an offer from the Latvian continental team Rietumu-Delfin. I was three years there and then I was riding for one year with Axeon Hagens Berman. I know that these few years with the Rietumu and Axeon teams opened the doors for me for the bigger cycling game. 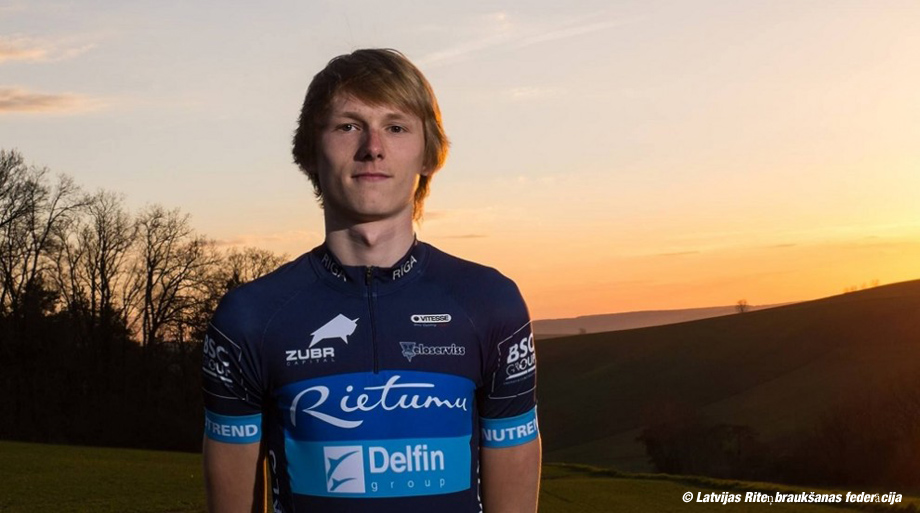 PEZ: Tell us about Rietumu-Delfin please.
Rietumu-Delfin was at continental level and the best team in Latvia for youngsters; the team didn’t have such a big budget to do the best calendar but it was a great school to understand what is cycling about and decide if you wanted to share the rest of your life with the sport. I’m really sad that this team stopped this year but hopefully it will come back soon, because we have some good young talents in Latvia and Rietumu was the right place to grow up. 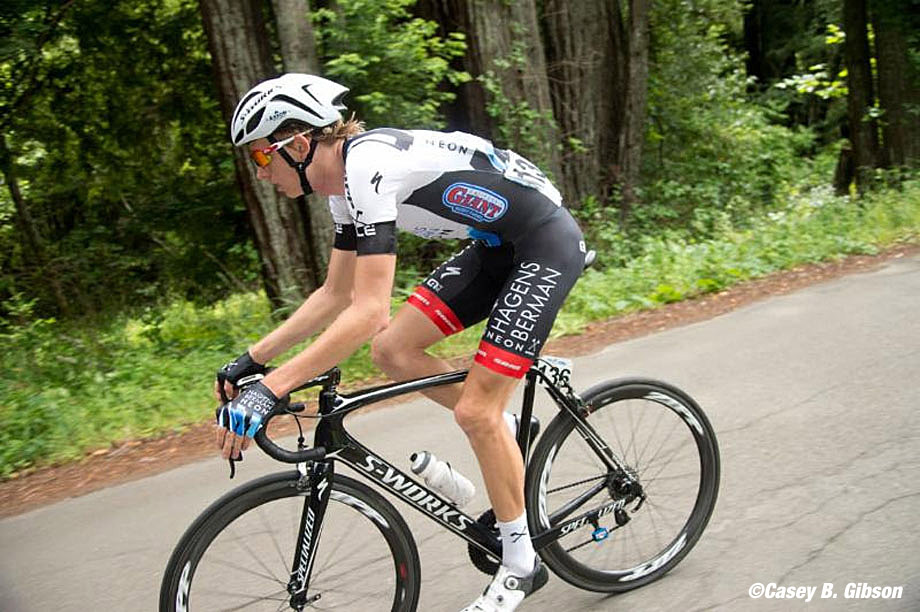 PEZ: How did you get the Axeon Hagens Berman ride?
That time my friend helped me out a lot, he gave some info about me to the team, they started to look at me and they gave me a chance to prove myself. That year with Axeon was an amazing, I enjoyed it a lot. For sure I can say this team is the best team in the world for the new kids. This way Axel Merckx and rest of the staff are taking care of the riders is something special. If you get into this team then you know nothing can go wrong here.

PEZ: And how did the ride with the Israel Academy come about?
After the season with Axeon my agent found this solution and I’m very happy to be with this team.

PEZ: The Israel team is very cosmopolitan; what’s the language at the dinner table and how do all those nationalities gel?
We use English as our language in the team; I think it’s cool that we have so many nationalities here, and it’s funny that everyone has a different accent, we can make good jokes with each other and that makes the team more friendly. 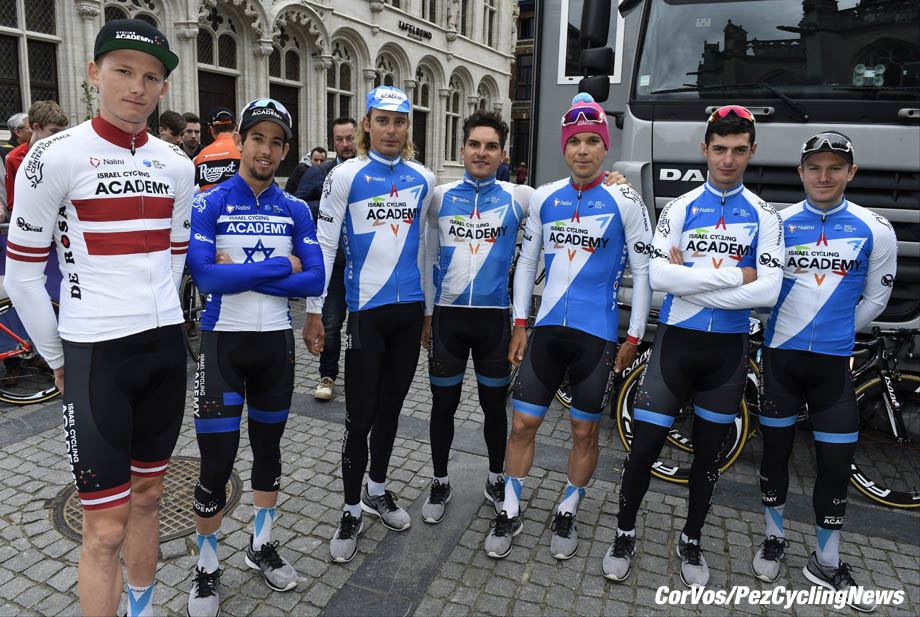 PEZ: You started the year well with a top 10 in the Sun Tour, tell us about your winter preparation.
Most of the time in winter I’m in Latvia, where I’m doing bike rides, gym, swim and that kind of thing. Sometimes it quite cold in Latvia for bike rides, but for me it’s cool thing, something different, I can take my cyclo-cross bike, make some hot tea in thermos and go for nice winter ride in forest. 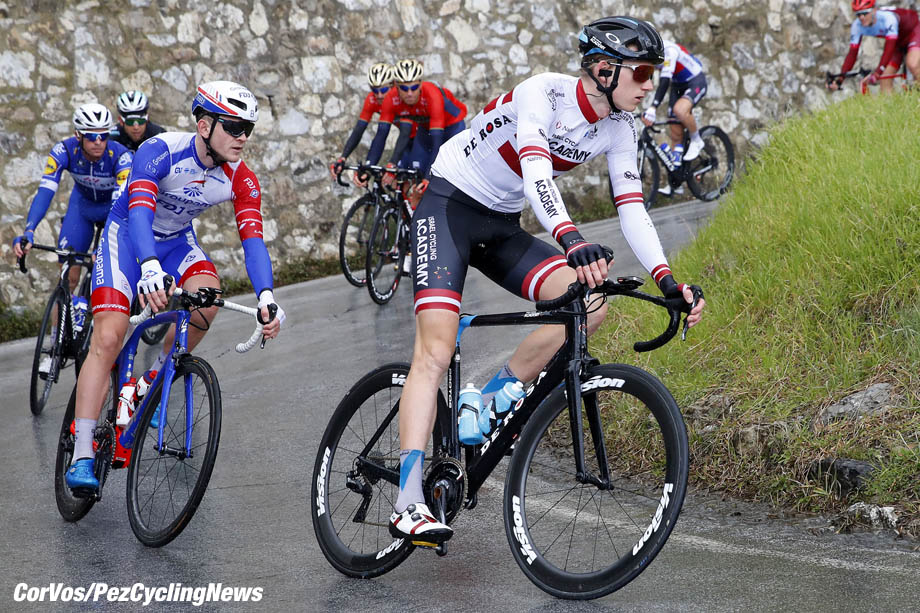 PEZ: What’s your favourite kind of race – and why?
Probably it’s one day races; hilly or with some off-road sections, there you go just for all or nothing, you don’t think about tomorrow.

PEZ: Milano-Sanremo, you were them man who started the winning move – looking back, what are your feelings about the race?
I got the green light from the sports director to try an attack on the last climb, I felt super-good on that day so why shouldn’t I try? Now, I think if I’d been a bit smarter timing my attack then maybe the finale could be a bit different – but still I’m happy that I was able to spark the wining move after a 290km long bike race and show the Latvian national colours in the finale. 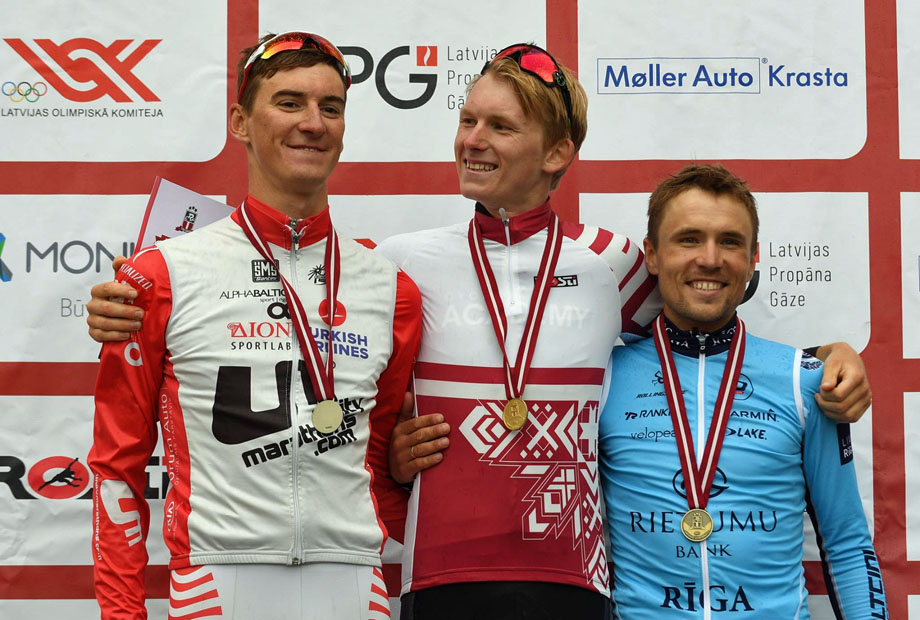 PEZ: How big is Cycling in Latvia – do the Media pay it much attention?
Cycling is growing now in Latvia again, we have a peloton with good riders who are racing at pro level. It’s great to see that Latvians are doing well this season. The Media pay attention to it which I think is important for this sport to make it more popular. 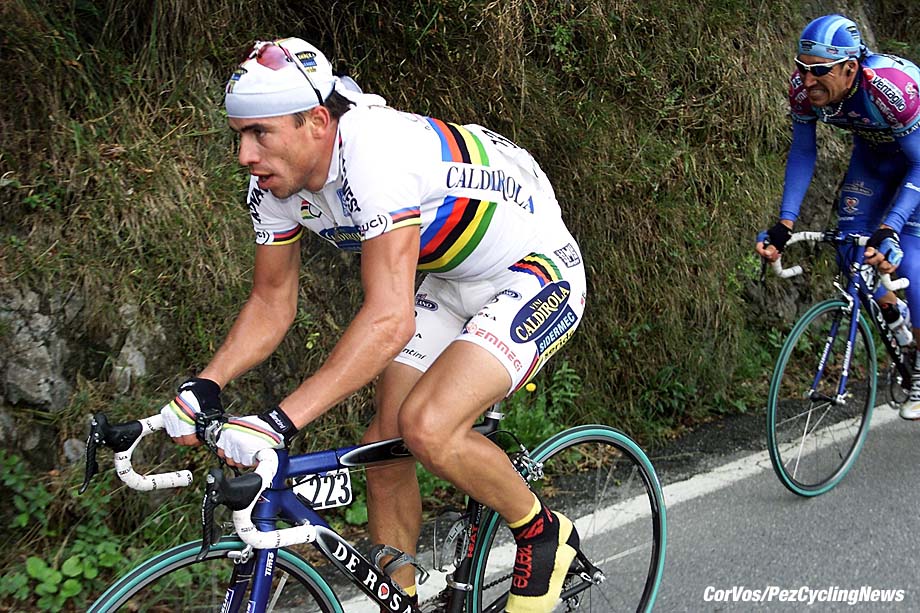 Roman Vainsteins was a class act

PEZ: We all remember Roman Vainsteins winning the Worlds – is he still involved in the sport?
He started last season as a national team coach but then something went wrong – but I don’t have information on what. Now he is taking care of his own restaurant, we live in the same city so sometimes I’m stopping in for a coffee there. He looks good there and I’m glad to see he has his own thing to do now after his cycling career.

PEZ: And who’s going to win the Tour de France?
I think Movistar will light a fire under the Tour. 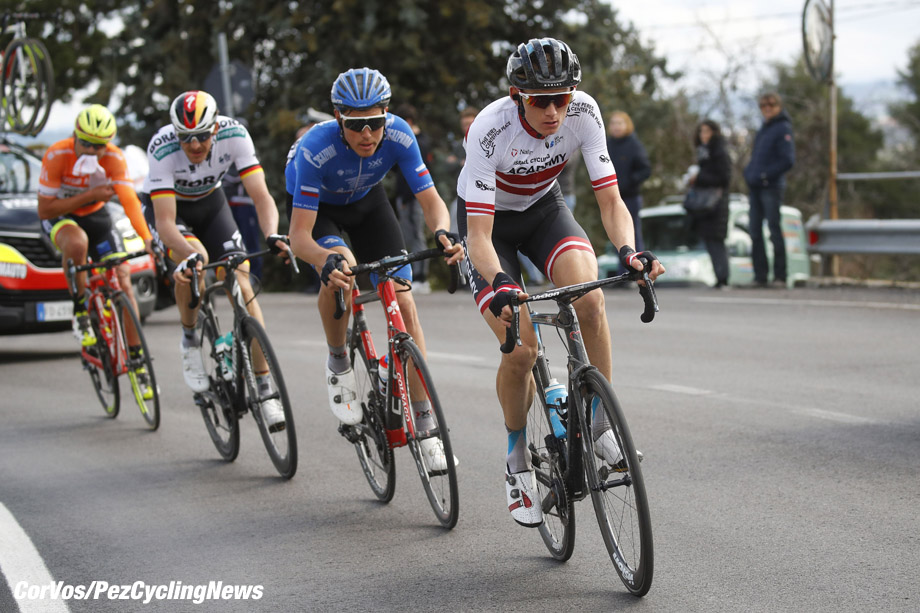 # And that’s from a man who knows – with thanks to Krists and wishing him success for the rest of the season. #