Interview: As it looks like Israel is becoming a force to be reckoned with on the road with the Israel Start-Up Nation WorldTour team, track cycling is also coming out of the shadows. Ed Hood managed to find out more from the man behind their future success – Steve McEwen – ex Dutch National coach and now Track Program Director in Israel. 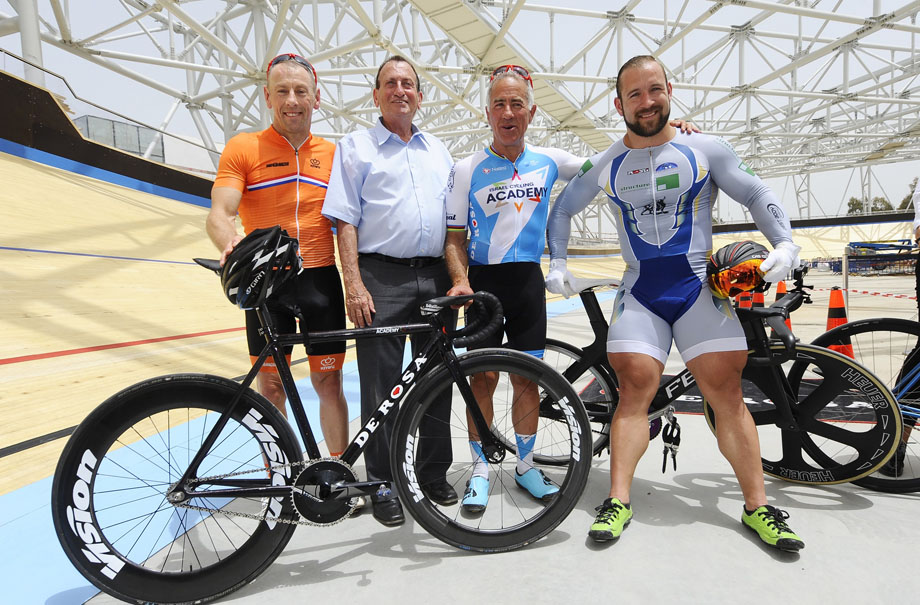 It’s a fair distance from Lochgilphead in the west of Scotland to Papendal, Arnhem in The Netherlands – but even further to Tel Aviv, Israel. Google tells me it would take 60 hours of driving to cover the 3,494 miles. ‘And?’ I hear you enquire. Steve McEwen is one of the men who was instrumental in the recent revival and dominance of Dutch track fortunes on the international stage and who is now charged with building track sport in Israel from zero to international competitiveness hails from the little Scottish town on the banks of the Crinan Canal. 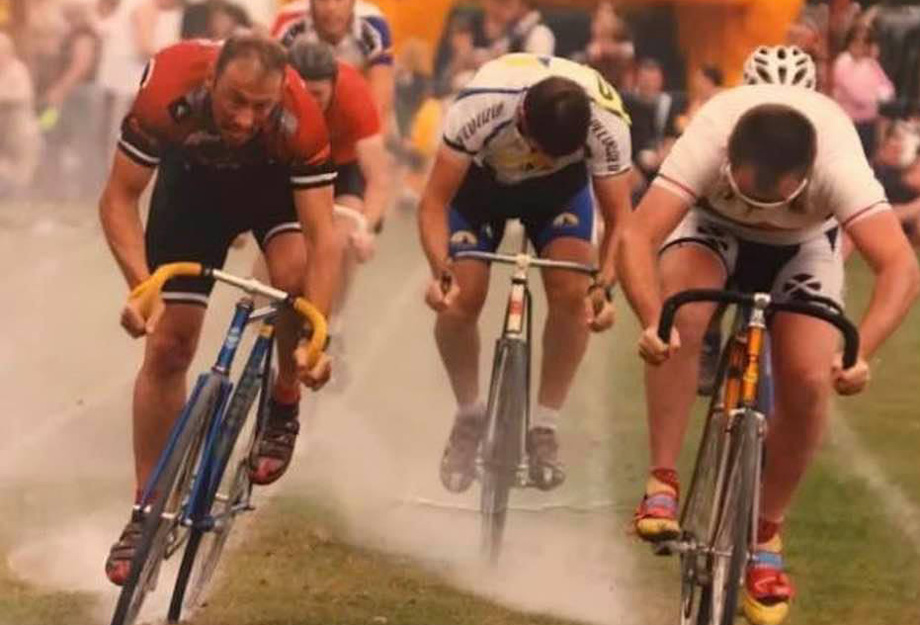 Steve McEwen (left) on the grass in Perth, Scotland

PEZ: The basics first please, Steve – where are you from and how old are you?
Steve McEwen: I turned 54 years-of-age last week and I come from Lochgilphead on the west coast of Scotland.

PEZ: I see you’re a Gaelic speaker, do you get much practice these days?
Yes, you have to be able to speak it living there – it’s a magnificent language but I have no opportunities to speak it these days. 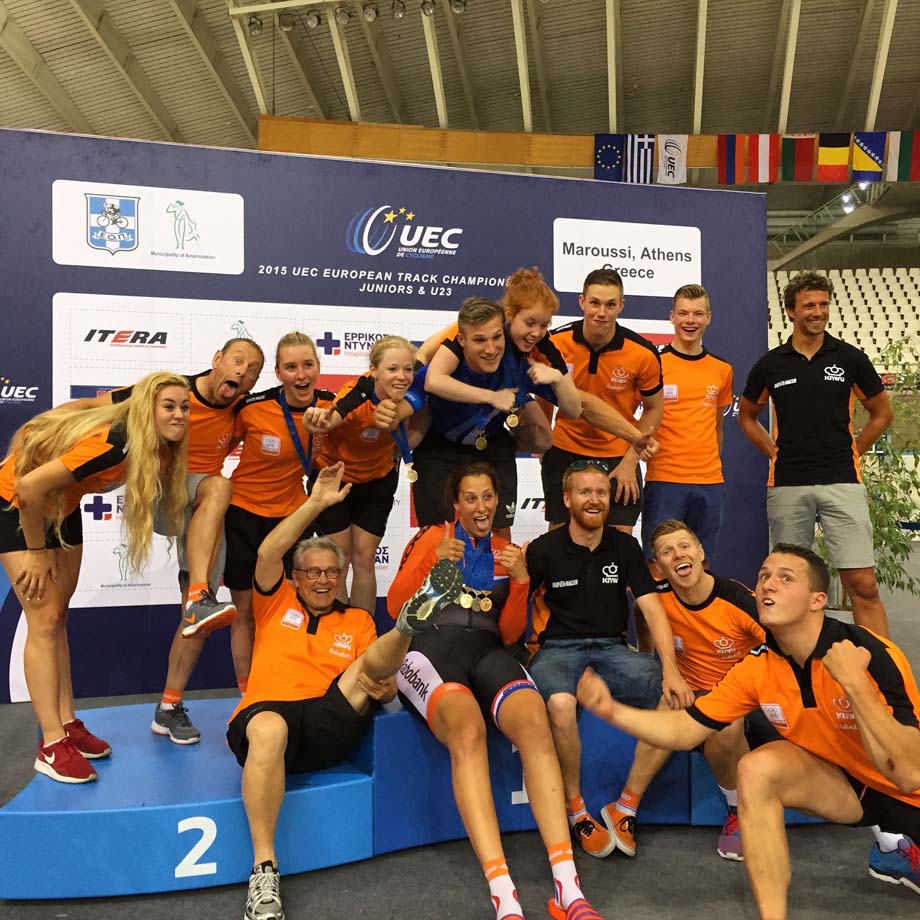 Delivering the performances at the European u23s

PEZ: You used to play rugby?
Yes, for Melrose in the Scottish Borders but I sustained a bad injury to my rib and was advised if I broke it again it could splinter into my lung – so I heeded the warning.

PEZ: And a you were a ‘mountain bike man’ too?
Yes, and I got to a good level pretty quickly, top five finishes at Elite level – when I started cycling I started taking my first step towards my coaching exams. 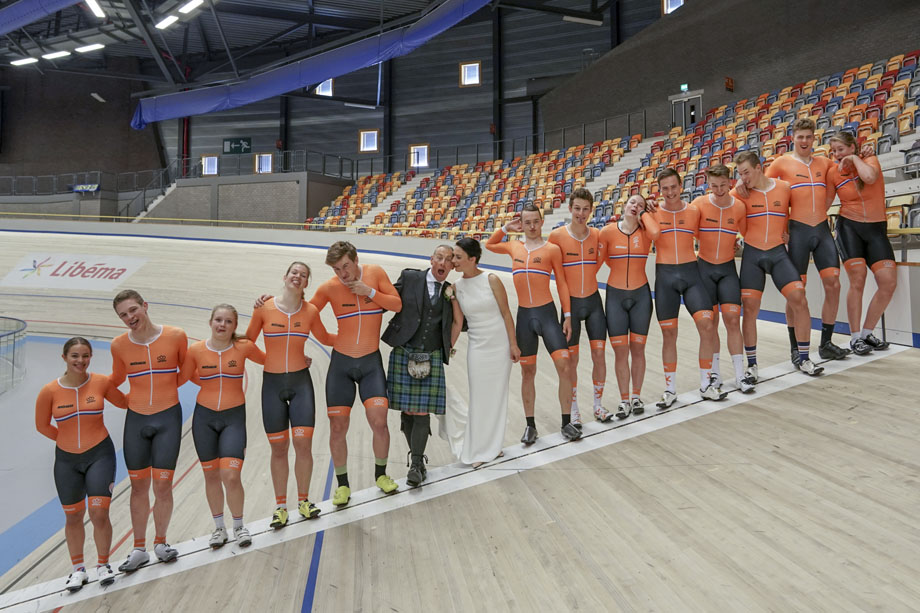 PEZ: From grass track at the highland games in Scotland to the Dutch Elite track squad, that’s a bit of a hop?
When I was racing in Turkey with the GB mountain bike team I met this nice, blonde Dutch lady. . . We married and initially we lived in Lochgilphead, but after six months we moved to Drenthe in the Netherlands where I became involved with the NTFU which is an organisation to get people on bikes and enjoying it – not necessarily competitively; out on runs anywhere between 40 and 150 kilometres, having fun, stopping off for a bite to eat. That lead me into working with the Rabobank track development squad and then in to the KNWU [Dutch national federation, ed.].

PEZ: Tell us about your gig at the KNWU.
They were looking to change their programme, I was there to help the German ex-Olympic Team Sprint and World Individual Sprint Champion, Rene Wolff. There was no plan for the future and we were tasked with creating a future for The Netherlands for their sprint events. I moved to Papendal where the Dutch Olympic Training Centre is based and we went to work. We worked with existing athletes like Jan Van Schip and Yoeri Havik but looked at other avenues where we could attract riders with potential, holding talent days where youngsters could try out on the track and also looking at the BMX riders. That’s where Harry Lavreysen the current World Team and Individual Sprint Champion emerged from. He loved BMX and had explosive strength but had sustained injuries; we spoke to his BMX coach and brought him across. We also introduced strength and conditioning training to which all the athletes said; ‘what’s that?’ Now it’s an absolutely essential part of a track sprinter’s programme. 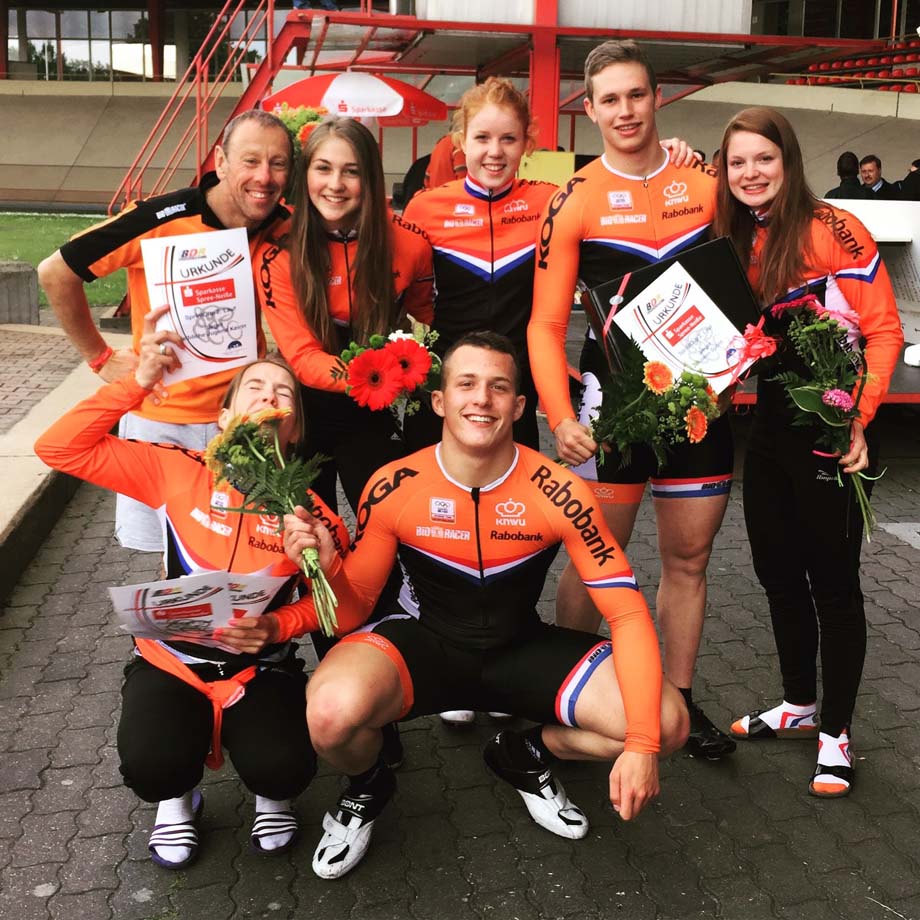 PEZ: World champions created and the Olympics coming up – why leave?
I had a fabulous position with KNWU, yes. But in my MTB days I’d raced, made friends and established contacts in Israel. The Israeli Cycling Federation contacted me and said that they’d decided to build a velodrome and they wanted me to come over and give them my vision of how they should go about building track sport from scratch in Israel.

It’s a nice track, 250 metres, 47 degree bankings, roofed but open at the sides. I met Sylvan Adams [billionaire philanthropist who was born and raised in Canada. He served for nearly 25 years as president and CEO of Iberville Developments, one of Canada’s largest real-estate development companies founded by his father, Marcel. At the end of 2015 Adams immigrated to Israel, settled in Tel Aviv and was the driving force and fund provider behind the Giro d’Italia starting in Israel in 2018, ed.] who funded the velodrome. I met with him and he asked me to give him my vision on how to establish track sport in Israel. I explained that we had to catch them young and also look at bringing riders over from the road to ride the track endurance events. But we also had to grab attention, the Junior Track Worlds would be a good event to aim to promote in Israel as would a six day race. He liked what I had to say and as he left the presentation I heard him say; ‘I don’t know what it’s going to cost but make sure we have this man on board for next year.’ I remember thinking; ‘did he really just say what I thought he just said?’ 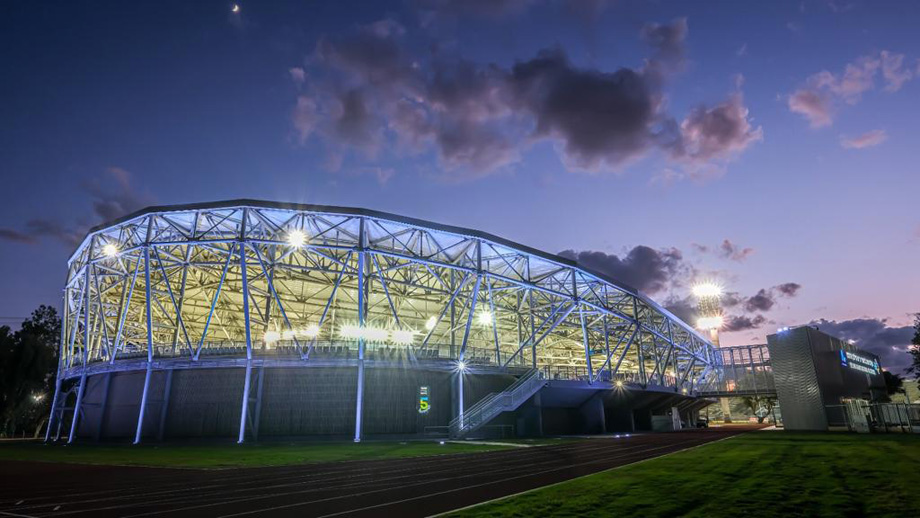 PEZ: And that was the start of your Israeli adventure?
It’s not as simple as that; to be granted the necessary permissions to work in Israel in any field you have to prove that you are better qualified than anyone else in the country to do that job. I had to produce all my diplomas and evidence of my qualifications for vetting. My contract with the Dutch Federation finished at the end of 2018 and I accepted the Israeli offer for 2019 – it was a once in a life time opportunity.

PEZ: How goes the project?
There are number of hurdles to clear; there’s no history of track racing in Israel, no knowledge of velodromes whatsoever. Then the UCi haven’t helped either by changing World Cups to ‘Nations Cups’ meaning that we can’t have an Israel Start-Up Nation team in them.

At all of these events we can select the teams we want, there’s no qualification criteria for them. What’s also problematic is that there’s national service in Israel, 32 months but with a possibly of that being reduced to 30 months this year. It’s a big chunk of time to be away from the sport at an important time in athlete’s development – some never come back to the sport. 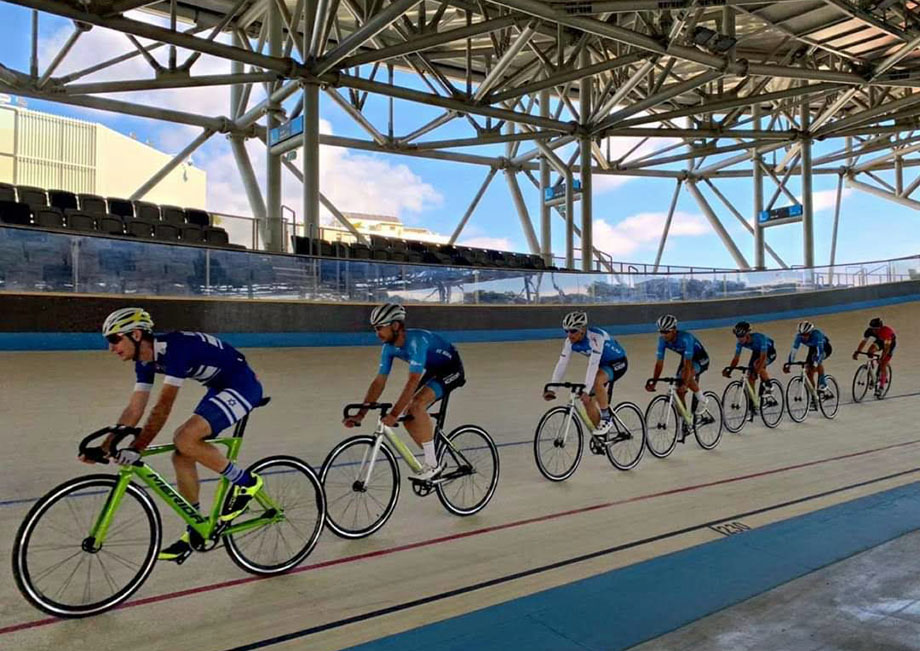 PEZ: And longer term, are there podium places in the plans?
Next year, 2021 the real hard work starts, that’s the start of the 2024 Olympic cycle and on February 25th of this year we’ll know what the UCi qualification criteria are.
Medals are perhaps a little further away but we, ‘never say never.’

# If Sylvan Adams and Co can get the Giro into the desert and own a WorldTour team, I wouldn’t bet against those medals. # 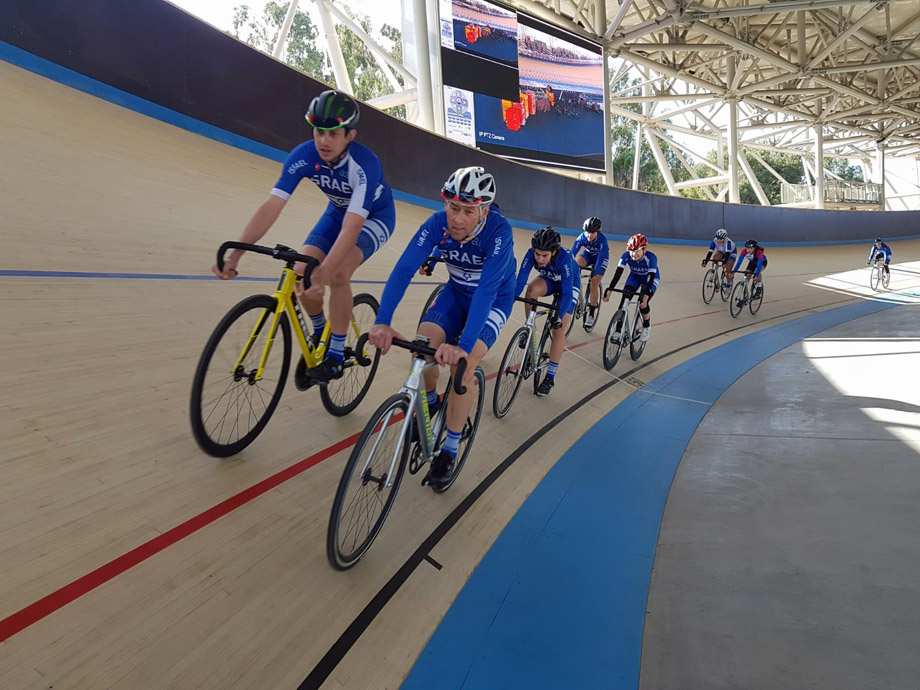 Training on the track with the National Ladies