Ex-Rider Interview: From the first Japanese Grand Tour finisher, Masatoshi Ichikawa, to a rider who fought through the hard knocks of life in the low counties – Mud, cobbles and the slim pickings of Holland and Belgium. Ed Hood talks to Masahiko Mifune who plied his trade on a bike for nearly fifteen years as a professional. 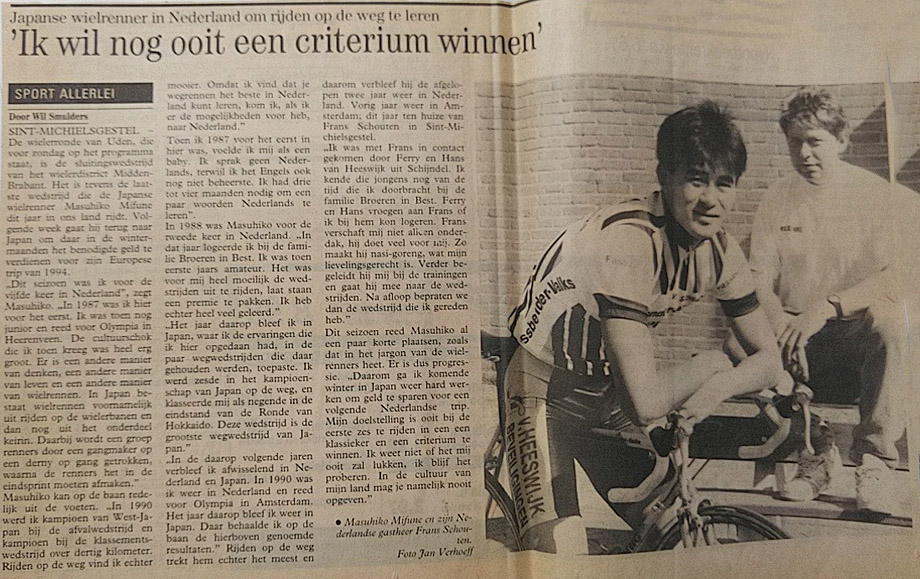 Earlier in the year we ran an interview with Bahrain-Merida DS, Tim Harris – it’s no surprise that he’s involved with a cycling venture from a nation fresh to the sport. Although English by birth he rode for Portuguese, French and Dutch teams during his 80’s and 90’s race career and now lives in Belgium where his house in Hageland has given shelter to more than 100s of cycling’s most famous names; Cav, Froome, Gaviria, Thomas. . . 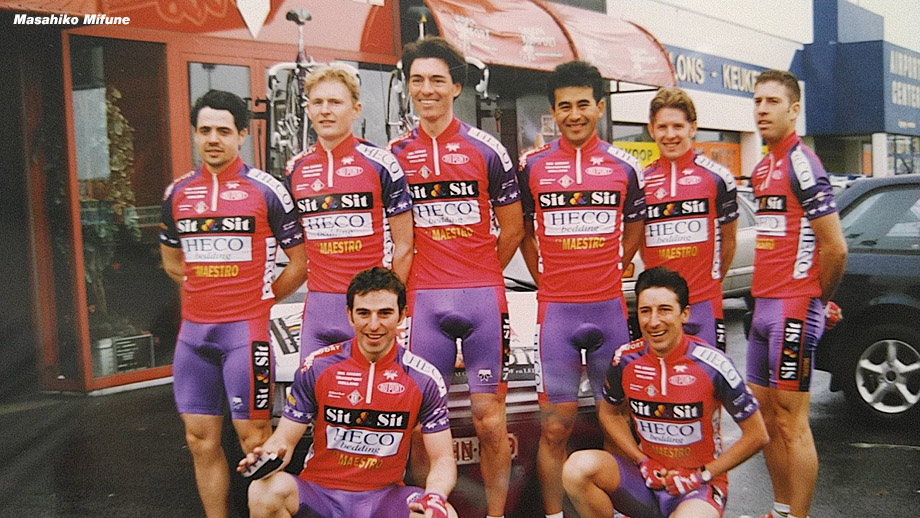 But not only has Harris ridden for and staffed a cosmopolitan selection of teams, he actually launched one of his own back in the early 90’s – FS Maestro. The team was British registered and at one stage had Dauphine winner and Grand Tour contender, Levi Leipheimer on the books. And surely uniquely for a British team, a gentleman from the Land of the Rising Sun, the Honourable Masahiko Mifune – here’s his tale:

PEZ: How did you get into cycling, Masahiko?
Masahiko Mifune: I enjoyed baseball and swimming when I was a kid, but one day I saw the Tour De France on TV and was hooked. I started riding around the neighbourhood with my friends and pretending I was riding the Tour. 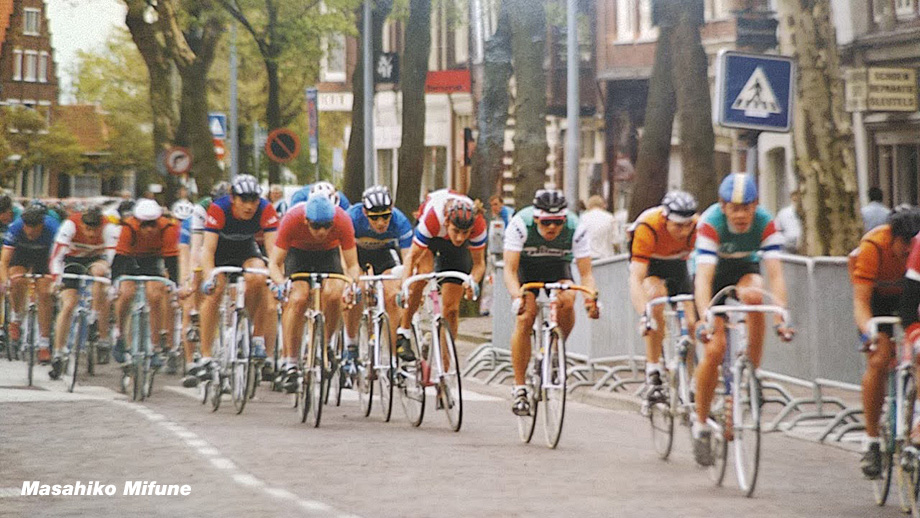 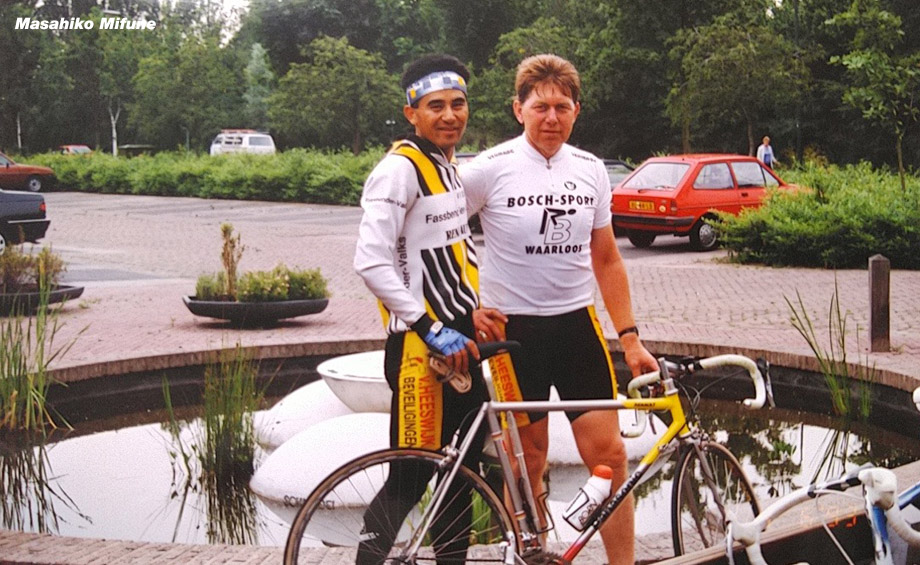 PEZ: You raced as a junior in Europe?
Just after graduating from high school, I flew to Holland to experience ‘real’ road racing.
When I came off the plane I remember feeling the cold brisk air and it just really hit me that I was a long ways from home. Experiencing European racing in my last year as a junior was eye opening and I learned so much from it. I had raced as a junior in Japan but Holland was a completely different world. It was the first category I raced where someone had the right to wear the maillot L’Arc-en-Ciel; in Holland the juniors ride with one aim – to become pros. They train hard and every aspect of their life is dedicated to make it as a professional. It wasn’t a game of pretend anymore. 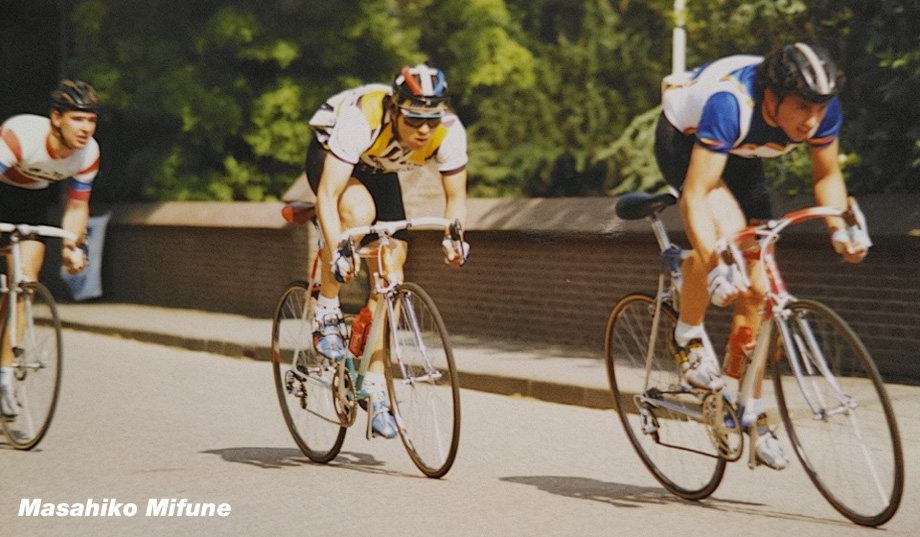 PEZ: Tell us about the Panasonic Panaracer team you first rode for.
In my first year as an Elite, I was struggling and burned out in Holland. At that time, Sugino supported my racing in Japan and I decided to go back; I thought I could target the domestic calendar and just use the Europe racing for training and racing. As a young rider, it’s hard to understand how dedicated you have to be succeed. At that time I really wasn’t committed and dedicating my life 100% to cycling. But when I got back to Holland, I strangely started getting better results. Maybe I had just matured, but I racked up many top 10 results. One day, an ex-Panasonic team mechanic who worked on my bikes came and said, ‘You’ve become stronger since the last time I saw you – I think now perhaps you’re capable of turning professional?’ It was then that I started thinking, ‘I want to turn pro in Europe. I don’t want to use these races to get results in Japan.’ So the next year I decided to ride as an individual pro supported by Panasonic Panaracer. 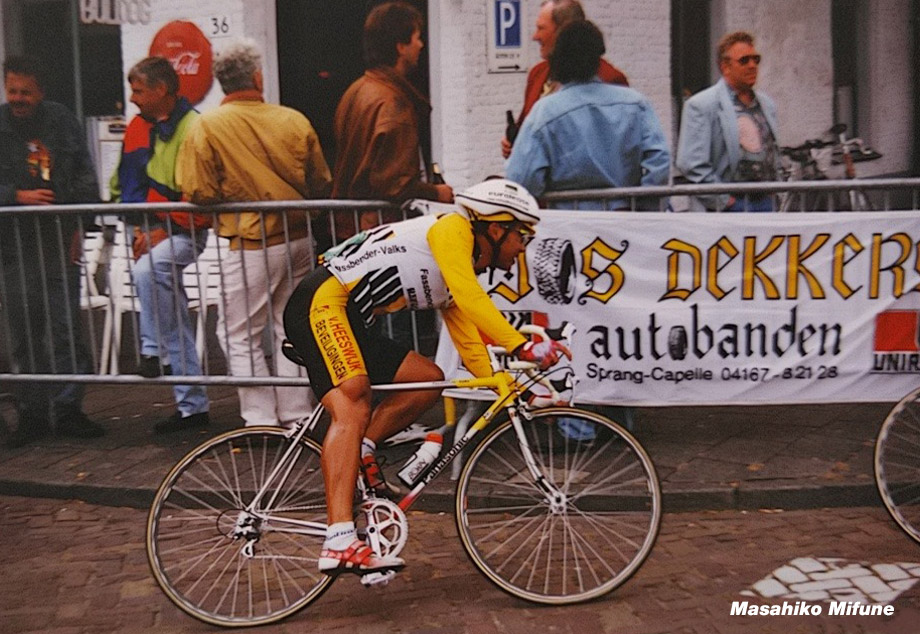 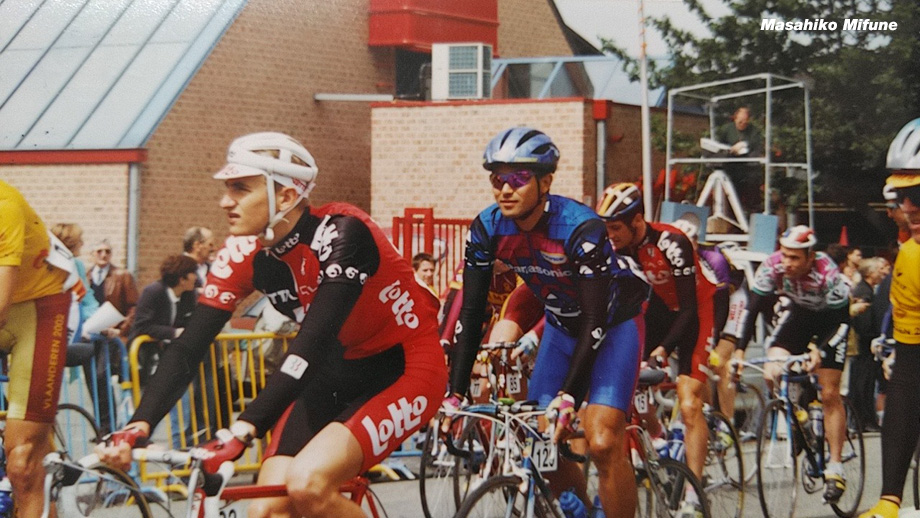 PEZ: Tell us about your first races in Europe.
In my first European junior race I came in ninth. It was like beginners’ luck; after that I couldn’t crack the top 10 for a while. The same thing happened when I stepped up to Elite category. I had to get used to the speed and differences of racing in the Elites, but I improved step-by-step. Many riders from outside Europe come to ride the elite races and are shocked at how hard and fast the races are, and many riders stop racing because it just seems to be on an unattainable level. I was lucky. 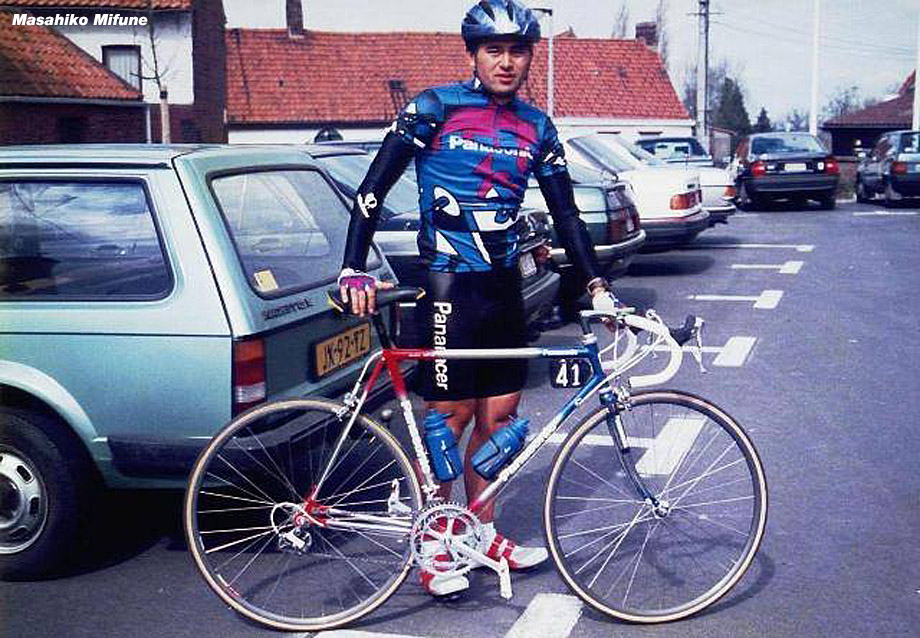 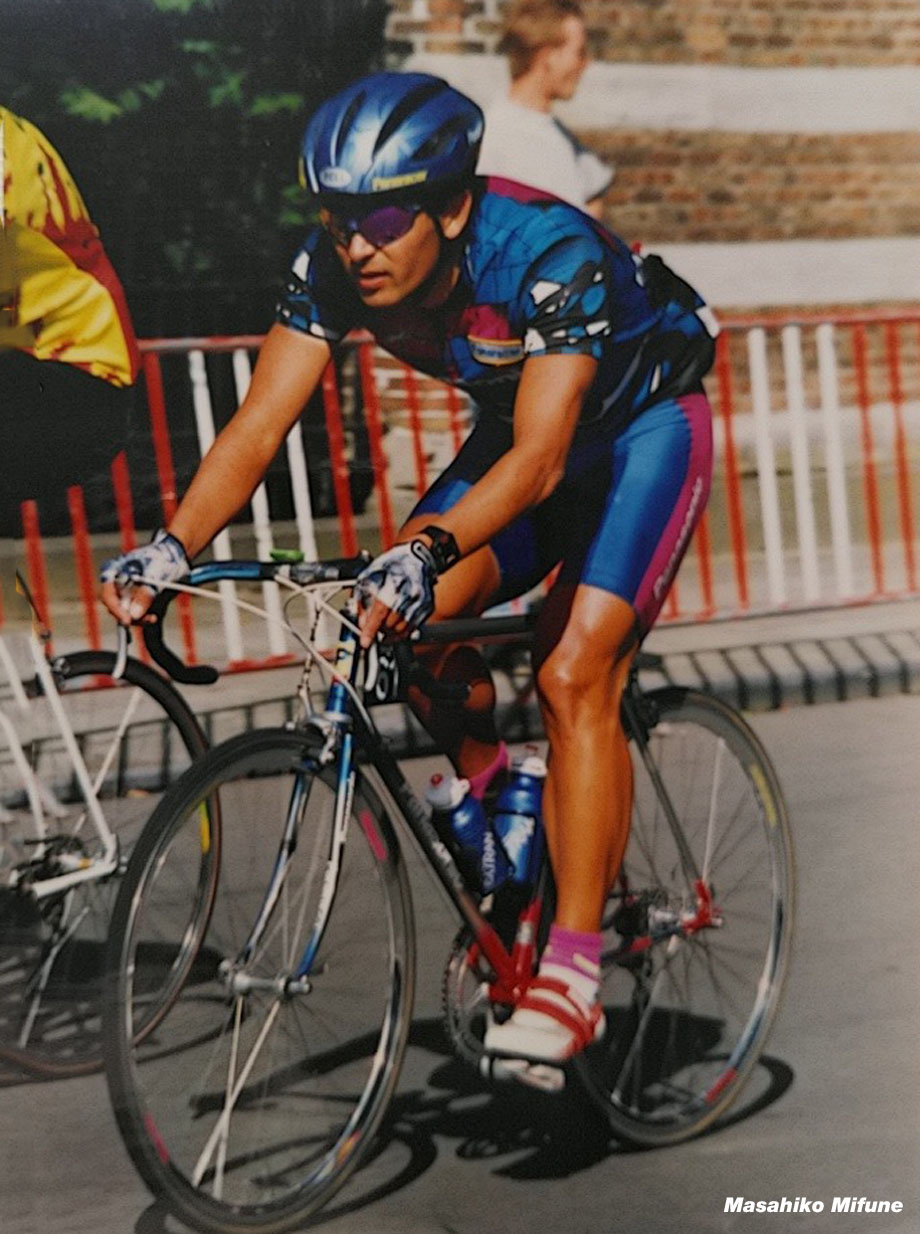 PEZ: FS Maestro – how did you get that ride?
During my time with Panasonic – Panaracer, I did everything to get on the start line. I would call the race organisers to get a spot or perhaps get them to put me on a composite team. I would then find a hotel, call in a reservation, and drive to the races. It was a little tough but those hardships were necessary to mature as a rider and a person at the same time. The environment plays a big role for shaping personalities. One day I got a call from Tim Harris asking me if I’d to join his FS Maestro team. We rode in good races like the HEW Cyclassics and Paris–Bruxelles; but the team wanted us to race as much as possible to earn start money. I remember one month I actually raced 22 races; riding a three day stage race over a weekend in Bretagne then as soon as we finished we packed the cars and drove straight to Germany to be on the start line for another race on the Monday. We stayed in Formule One motels in order to save money and even dined on Big Macs the night before a classic. It was a good experience though — I realised that if I had the opportunity to join a bigger team, I could change my circumstances. 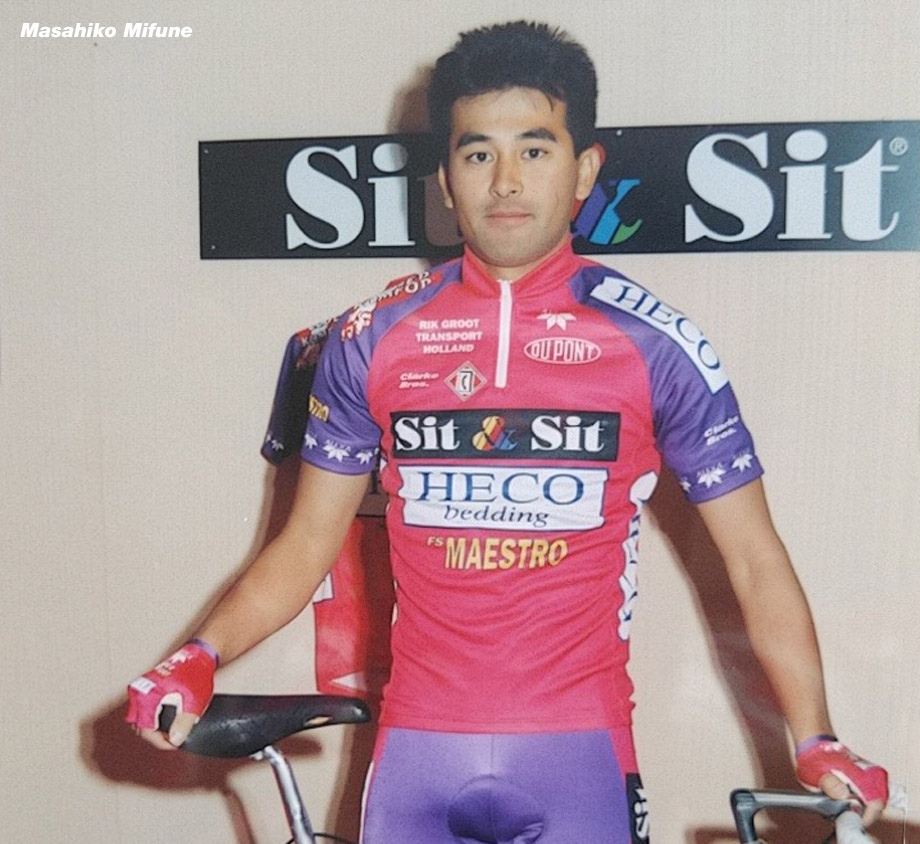 But my time with Maestro cultivated my ‘hungry spirit’ the time there helped me continue developing as a pro cyclist — you could even say that hard times there were necessary for me to learn to survive as a pro. 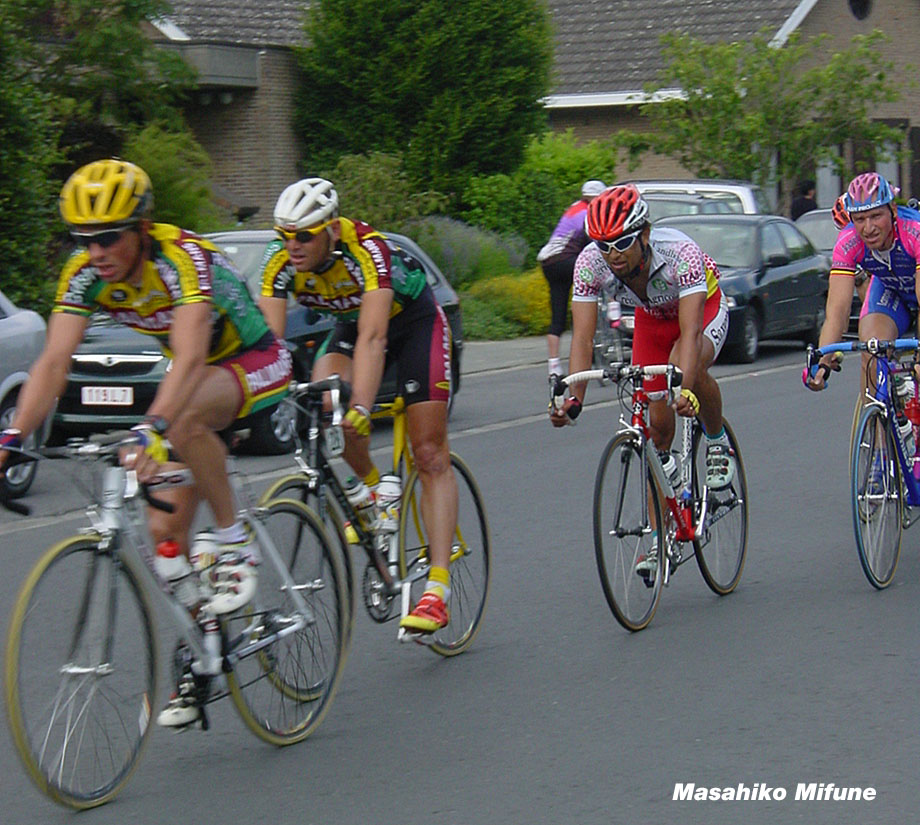 With Ludo Dierckxsens on his wheel

PEZ: You went to Tonissteiner in’97 with some strong top 10’s in your four seasons with them.
During 1996 season, rumours spread that Maestro was going to fold so I start looking for a team. Some teams were interested in me, but they weren’t interested in my merits as a racer; most of them expected me to bring Japanese personal sponsors. Only Tonissteiner was interested in the results I had achieved and I got a contract with the Tönissteiner – Colnago team for 1997. The Team changed the name to Landbouwkrediet – Colnago in 2001; I was on the team until 2002 – so I was with the team for six years. Former Belgian Professional Road race Champion, Ludo Dierckxsens and former World Professional Cyclo-cross Champion, Paul Herijgers were both on the team during my time there. I loved racing in tough conditions. I really thrived and got good results when it was cold or rainy, and I rode well when the weather was bad on the cobblestone roads in Belgium. So the team was a good fit for my strengths. 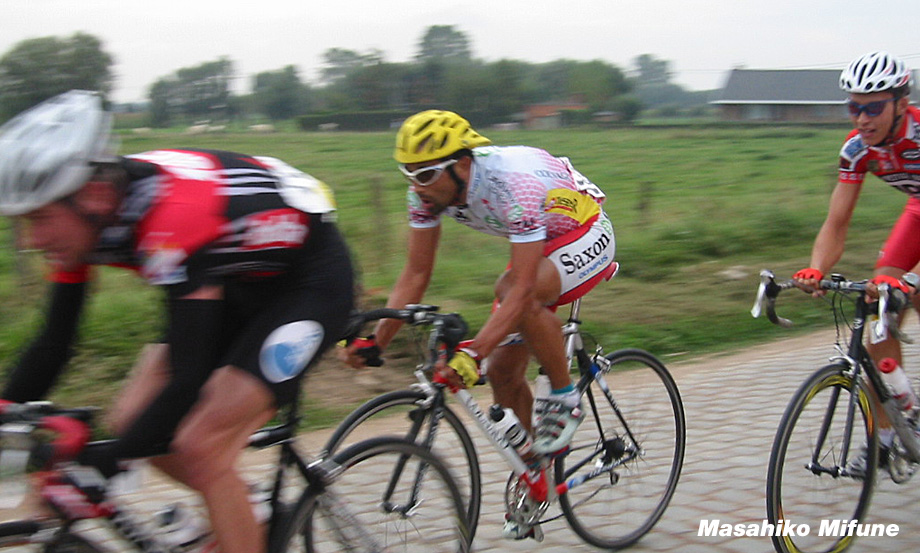 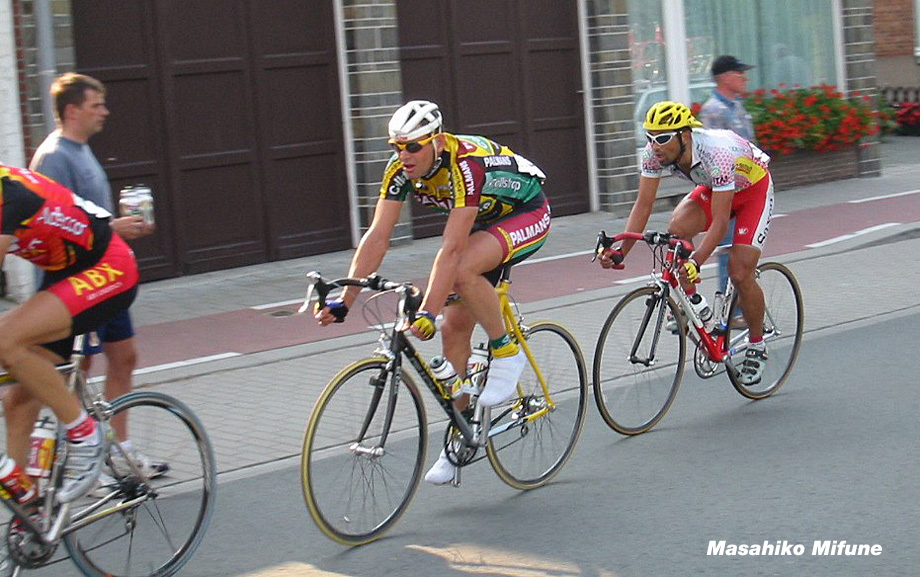 PEZ: Where were you based with Tonissteiner?
In Kortrijk, Belgium. There were a lot of pro races in Belgium so I moved to Belgium from Holland. 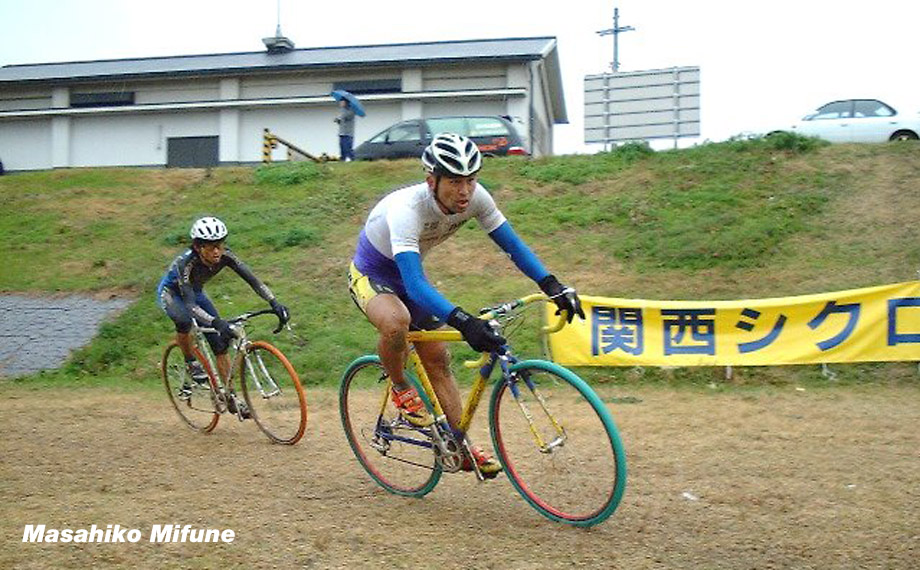 PEZ: You won the Japanese cyclo-cross title in 2000 – is it a big sport in Japan?
Back then I raced over 100 days in a year. After coming back from Belgium, I raced CX in Japan. It’s not a big sport in Japan, but it was becoming popular and in my home area hard core enthusiasts started organising a series; every year the popularity has expanded to other areas in Japan. I stayed at former World Cyclo-cross Champion, Richard Groenendaal’s mechanic’s home in Holland. My team mates suggested I do ‘cross so I got into it. 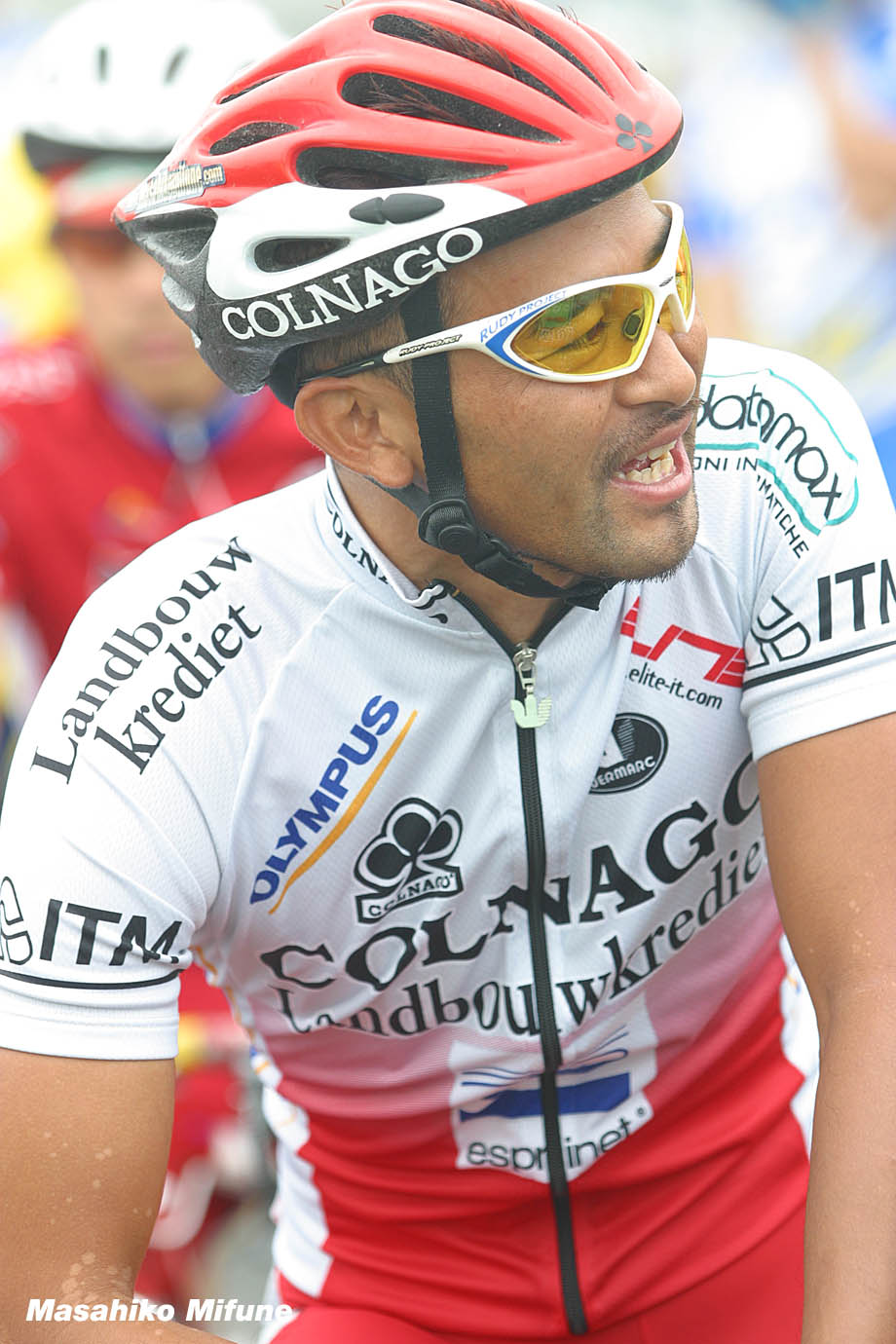 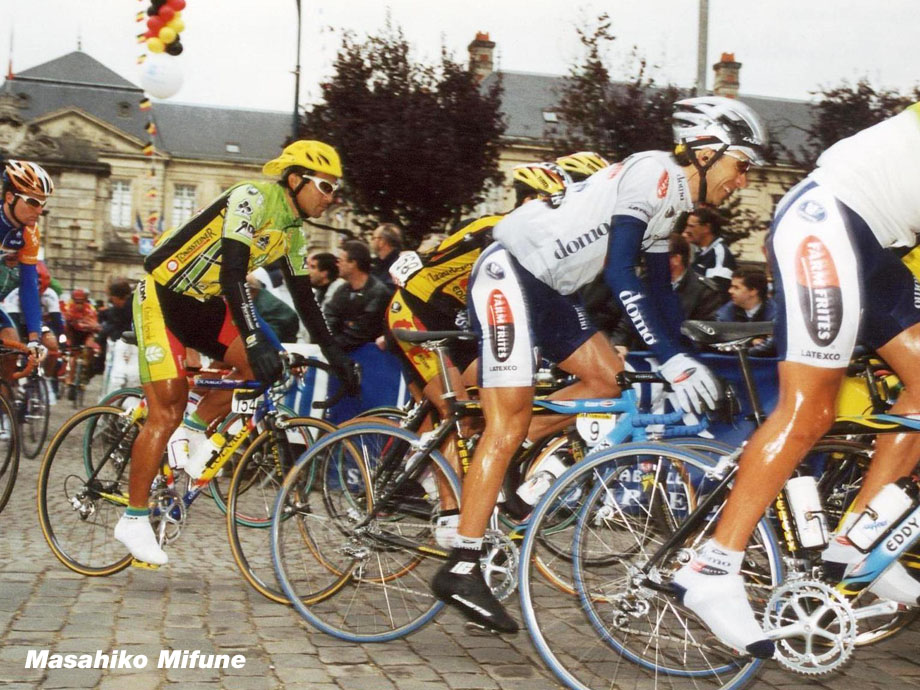 PEZ: You were fourth in the season-closing and hotly contested Putte-Kapellen race in 2002.
I was usually in good condition during Autumn so I really focused on getting some results near the end of the season. I got 11th in that race in 2001 so I knew that the course really suited me. In 2002, I attacked and stayed away from the early part of the race. In the last 15 kilometres, the race favourites caught us; Tom Boonen and Servais Knaven were there. Those in the group were watching Boonen’s every move in the final kilometres. It was a strong headwind and we were all hesitant to make the first move. I attacked between Boonen and Benoît Joachim when they looked at each other. I bet that if I got a gap and hit top speed in the last 500m even into a headwind, no one could pass me before the finish line. Unfortunately, I slowed and Geert Omloop got the win from Roy Sentjens and Gorik Gardeyn with me just off the podium in fourth place and Boonen sixth. 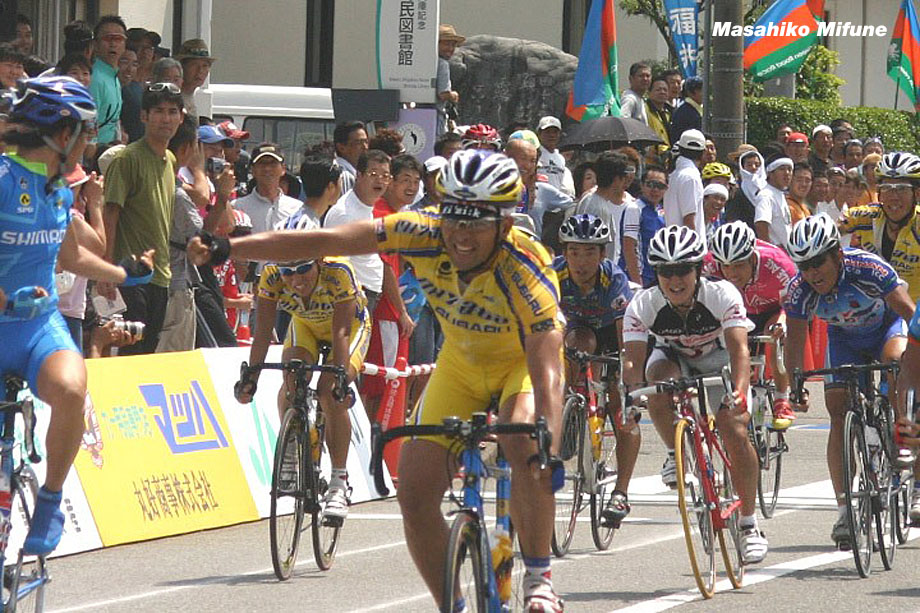 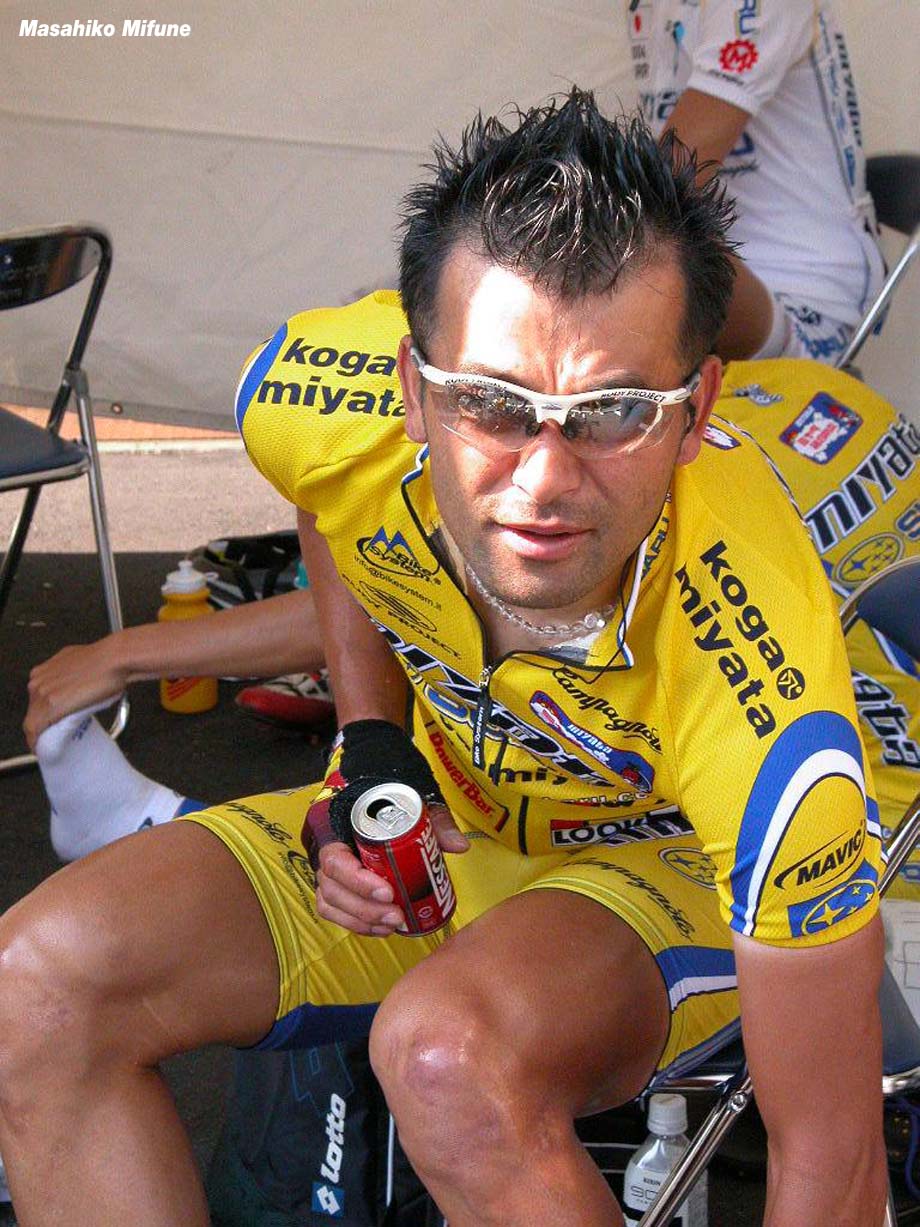 PEZ: Tell us about the Miyata – Subarau 05/06 and an Asian programme – how was that after European races?
Around 2002, UCI instituted stricter rules for pro teams and raised the minimum salary, especially for riders outside the EU. Tonissteiner couldn’t afford to keep me on so I returned to Japan with my family. I ended up riding for Miyata in ’03 and ’04 in domestic races. They weren’t registered as a UCI team, so I rode for the Marco Polo cycling team when I left Japan. In 2004 I won the Hong Kong cycling classic for them. That was a big race in Hong-Kong and Asia at that time. David Millar, Bruno Risi, and Wong Kampo all raced there. 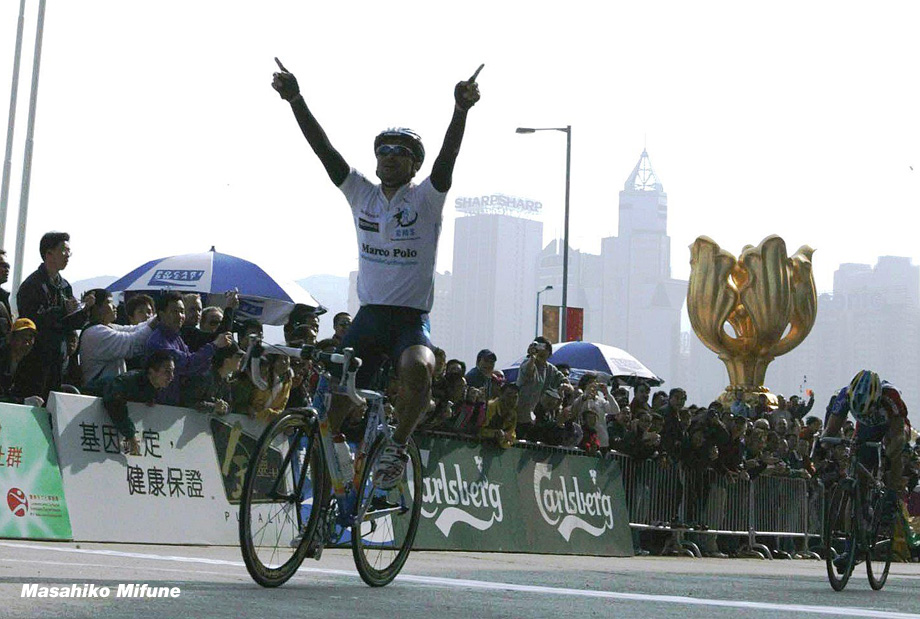 PEZ: What have you done since your retirement from racing?
I’m still heavily involved with cycling. I do some work in product development, as a speaker, and in event organisation. All of them are related with cycling — a similar kind of thing to European riders who have retired. From last year, I’ve also become the National Team Director for the Japan Cyclo-Cross team. It was great going to CX Worlds in Switzerland; I was able to see many old friends — it was like an alumni get together! And I still love doing big miles on the bike. I ride Brevets and I’ve done Paris – Brest – Paris three times. 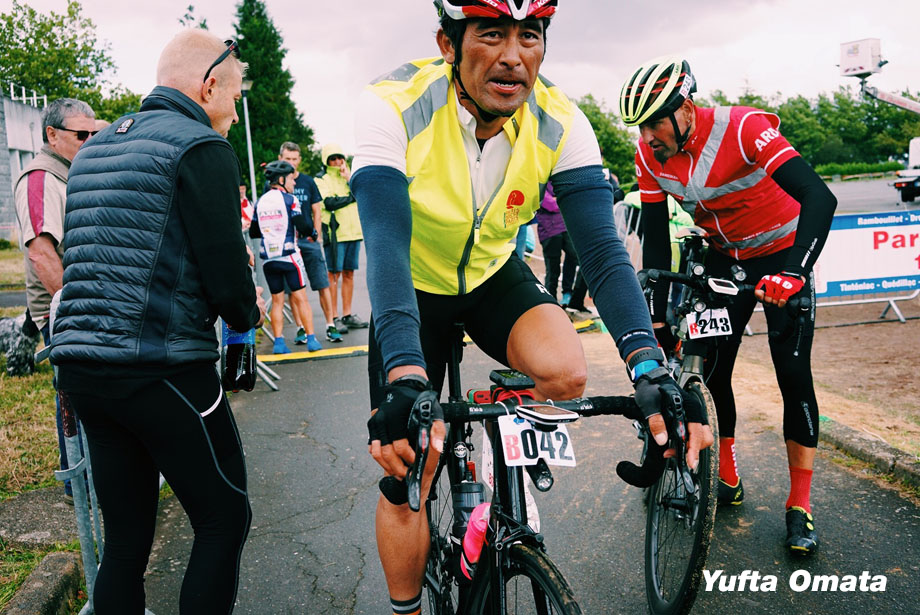 PEZ: And if you had to do it all over?
I think I wouldn’t have turned pro if I hadn’t gone to Belgium. It wouldn’t have been possible in France, Italy or Japan. So I’d choose the same path. As I said, I love cycling culture in Belgium. I didn’t hesitate to ride in bad weather which even local Belgian riders hated. I loved it. 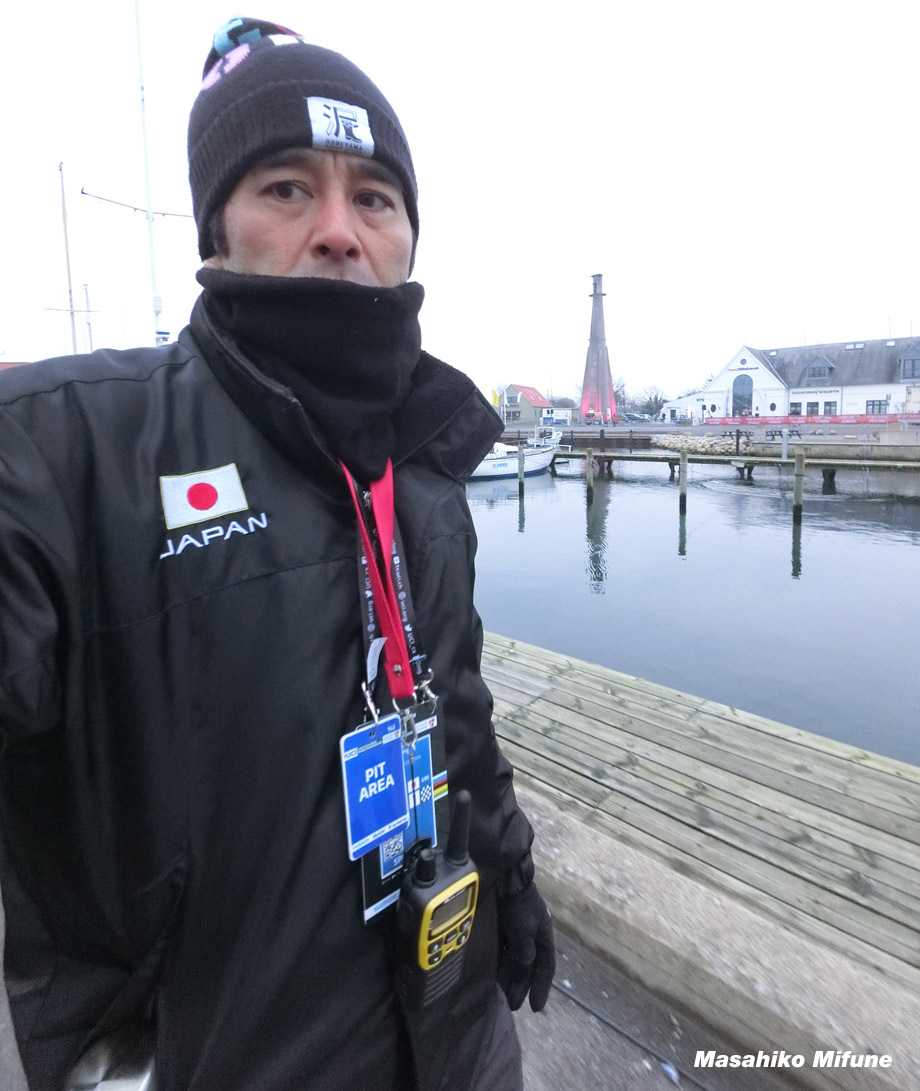 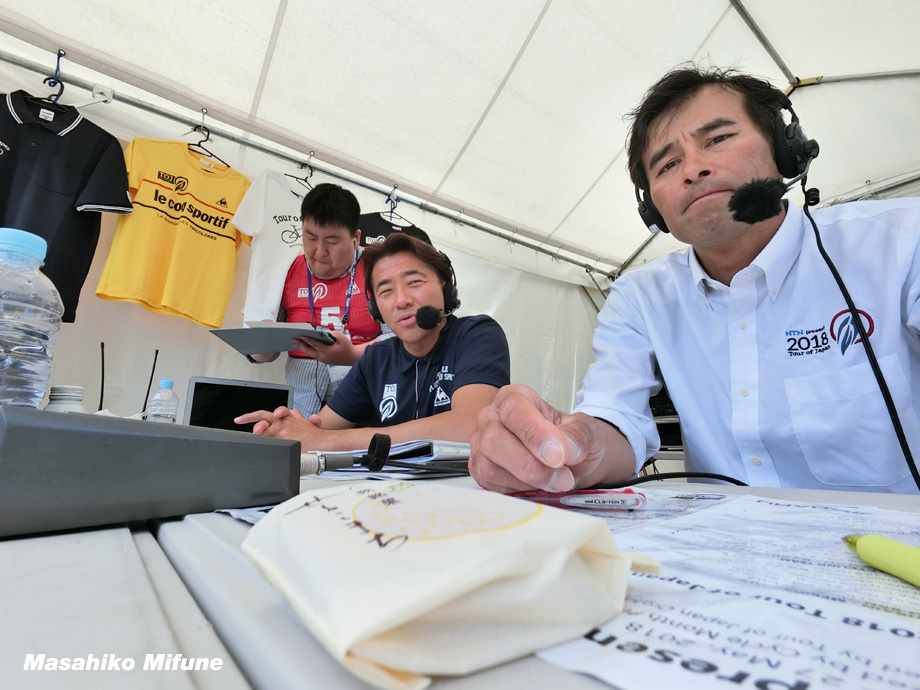 Training During The COVID-19 Pandemic: How To Stay Bikeathon-Fit