Now that the mud’s been cleaned off the cross bikes after the Louisville Worlds mudbath we thought it was a good time to catch up with Jeremy Powers. The man that dominated the early cross season in the States and recorded the best ever World Cup finish for an American sits down and looks back on the highs and lows of season 2012/13.

If you’d asked me for my predictions for the cyclo-cross season, after the first few races, last autumn, I’d have said; ‘Nys could well win the Worlds’ and; ‘Jeremy Powers will go top ten on the day.’ I was right with the first one but not the second.

Powers, 2012 US Elite Cyclo-Cross Champion, dominated the US ‘cross season right through the autumn and scored the best ever World Cup finish for a US elite ‘cross rider with seventh in Tabor in October. But come the US Nationals, he wasn’t the same beast; coming a disappointing sixth.

It was unlikely that he could raise his game sufficiently in the three short weeks before the Worlds – and despite making the podium behind Neils Albert in the prestigious Cincinnati Kings event between the Nationals and Worlds – so it proved, finishing 25th on that tough afternoon in Louisville.

With the last events of the Super Prestige and GVA trophies still to come before ‘cross is forgotten for the summer, PEZ caught up with Powers soon after he returned from a successful foray to Japan.

In front of a huge crowd in the Tokyo CX event he beat Japanese Champion, Yu Takenouchi (Koruba/Speranohamu) to win on the sandy circuit in the Japanese capital. It gave us the opportunity to ask an easy question first to the man who rides a summer road programme for Jelly Belly powered by Kenda and winters in the mud for Rapha.

PEZ: A nice win in Tokyo, Jeremy?
It was a good gig, yes. Cyclo-cross is growing in Japan; it’s getting to be a big sport. I think the Japanese spectators like to be part of a big sporting occasion – they’re not supporting a particular rider, they just enjoying part of the event.

There were 7,000 there for my race which compares to around 10,000 for the Worlds in Louisville – it makes you wonder about running World Cups in big cities, you’d get the crowds . . .

PEZ: You had a stellar start to the season.
Yeah, it’s something people have being saying to me; “did you go too hard at the start of the season?” But I got what I needed for me and my sponsors. 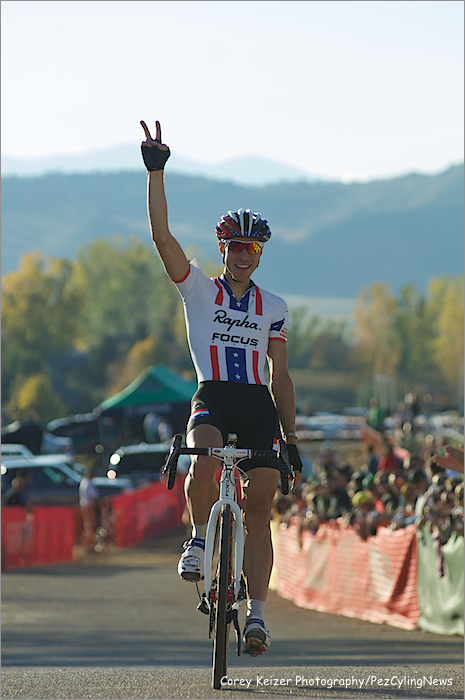 Powers was on a winning roll early in the season.

I won every race I wanted to; and that gave me good grid positions for the rest of the season – I was called ninth at the Worlds.

Called 9th at the Worlds but it almost turned to disaster in the first seconds of the race!

I guess I could have stayed racing in the US and just kept on winning – but I decided to go to training camps rather than race all the time. And I also travelled to Europe, three times – if I could ‘do it all over again’ I think I wouldn’t have done as much travelling, that used up an awful lot of form.

It was just that I wanted to peak so much for the Nationals and Worlds. But on the other and I was winning in September and I’ve won in February, so it’s not like it’s been a bad season – I’ve stood on a lot of podiums.

The trouble is now that the expectation is on me to perform well in World Cups, too. To do that consistently you’d have to live in Europe but my sponsors are in the US and I like to live and race in the US. I feel like I have a responsibility to the sport, here – but flying 40,000 miles before the Worlds wasn’t the best . . .

PEZ: You had the best ever finish for a US rider in a World Cup, in Tabor – seventh.
I had good form so I expected that result – but then in the second World Cup in Plzen I crashed and broke my rear derailleur. After that, and all the races I’d won in the States I should have put the brakes on and rested before building up again for the Nationals and Worlds. 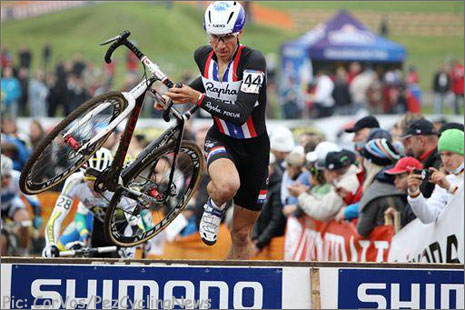 Jumping his way to 7th in Tabor.

PEZ: Sixth in the Nationals . . .
The course wasn’t best for me but it was within my range.
The problem was that the ‘wanting’ wasn’t there – that killer instinct where you’re thinking; “I’m going to win this,” I have to say that I was a little tired.

PEZ: That 25th in the Worlds must have been a disappointment, but maybe not a surprise?
I was 25th which wasn’t very good – I mean I’d think it was a mediocre result if I was 20th in a World Cup . . .

But it was a fabulous day for US cyclo-cross, like a graduation where everyone is having a beer and celebrating.
There were so many flags and people wearing my team strip in the crowd, it was amazing. Of course I’d like to have produced a better result; but that day made such a huge impact on US cyclo-cross – so if you look at the big picture, it was all good. 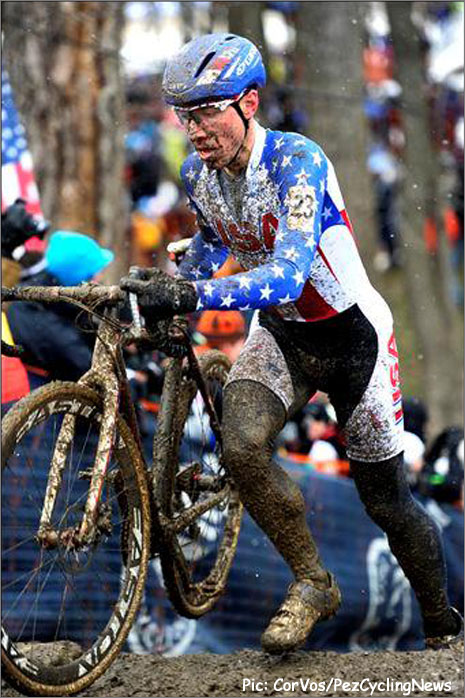 From a personal perspective I didn’t expect the course to be as heavy as it was – I’d ridden it a lot of times and found it to be fast. But the weather changed all that, it was really heavy and not ideal for me – there were a lot of places where you were off the bike and running where you hadn’t on the try out rides.

PEZ: Did you make the right equipment choices?
Yeah, you needed a tyre with lots of tread – I rode Dugast Rhino 32mm tubulars. The other thing was that you had to make sure that your cables were de-iced, or they’d freeze up.
And you had to change bikes every one or one-and-a-half laps because of the mud.

PEZ: Did you and Jonathan Page have much to say to each other before the race?
We talked a little, yes. We were both conscious of how big a day it was – but the thing in a cyclo-cross is that it’s pretty much every man for himself. If we’d ended up in the lead group we’d have talked more and looked out for each other.

PEZ: An obvious statement, but you must have been disappointed after Louisville?
The truth is that I was happy it was done. The week before I did 15 interviews; face to face and on the phone – everyone wanted to speak to the number one ranked US guy.
I was just glad it was all over. Of course I’d be happier if I’d finished 12th or ninth or seventh – but given how it all went, I can’t beat myself up too much. Some may say that I couldn’t handle the pressure, but it’s not that – I’m under pressure to do well every time I line up at the start. It was more the expectations which were being placed upon me – big contracts, the future of US cyclo-cross . . .

And remember that I’m not in my 30’s like folks think – I’m 29 years-old and still learning!

PEZ: When do you start back on the road?
I’m doing a little less on the road each year; I’ll start in May and race through June – I really hope that Jelly Belly get an invite to the Tour of California. I’ll be taking a break in July – I get married then – and the big build up will start again in August.

Catching Up With Martijn Verschoor!