Ken has been in top amateur and continental teams for a few years, mixing it with the top men from the Pro-Tour as well as the best amateurs in a wide selection of races. He rides for the Topsport’s feeder team; Jong Vlaanderen, and we caught him at home in Belgium for his young perspective on the sport.

PEZ: The cycling year got off to a sad start with the untimely death of Frederiek Nolf of Topsport Vlaanderen at the Tour of Qatar. How well did you know him and what was the feeling in Belgium?
Ken Devaere: I didn’t know him so personally, sometimes I went training in agroup and then he was also a part of it. Everybody here is overwhelmed and sad. Personally I find it very hard to understand.

Ken Sez: GP Scherens-Rondom Leuven 1.1 A super day but in the last lap, I’ve got problems with my chain, I ended 34thd.

PEZ: The Topsport Vlaanderen team pulled out of the Tour of Qatar and the Etoile de Bessиges as a mark of respect to Frederiek, when will they resume racing?
Ken: Normally they should go back at racing the end of February.

PEZ: It must be hard to get back into the racing mind-set after something like this?
Ken: Yes, but fortunately racing is like a cure it helps you get over it, NOT to forget it!!

PEZ: OK, let’s talk about nicer things. I first met you at the “Babes Only” team training camp in Spain 2007, for a small team it looked like a great set-up. It all went wrong, can you talk about it?
Ken: It went wrong with one of the sponsors, the son of one of them wasn’t as good as expected, so his father stopped with financing in May that same year. The manager Ronny Poelvoorde has done a great job to keep the team on track till the end of the season! So that we could do all the nice races! It’s sad the team quit because I never saw such a team spirit like that year.

PEZ: Your team, the Jong Vlaanderen-Bauknecht team and the Topsport Vlaanderen-Mercator team are the same but different, how does that all work?
Ken: The difference is that TV-Mercator is a fully professional team with all pros in it. Jong-Vlaanderen is a continental team where only the captain of the team Steven De Neef has a pro contract. We do also a combination of pro races and amateur races. JV is like a step up. But you don’t get paid! 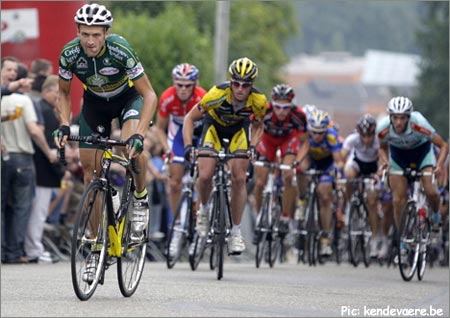 PEZ: You hold an amateur licence, but you can ride some of the Professional races, what are the differences?
Ken: The amateur races are smaller and not so organized, they start and ride without thinking you could say. A real pro race is longer, faster and also more tactical. Every part must be perfect before you can win.

PEZ: You’ve ridden for quite a few different teams since 2003, from; Beveren2000 (Amateur), Jartazi (Continental team), ACLVB team (Amateur), Saey-Deschacht team (Amateur), Babes Only (Continental) and Jong-Vlaanderen (Continental). Which was your best year?
Ken: The last three years, because I did a huge step on physical area and results.

PEZ: You’ve ridden some big races; Paris-Brussels, the Tour of Belgium etc. Which races did you “enjoy” the most?
Ken: Paris-Brussel I liked the most, that day I was really great. It was my first race above the 200 kilometres, after more then 5.30 hours in the rain I finished 15th. Further I like every pro race more than an amateur races, it’s just a different style of racing. 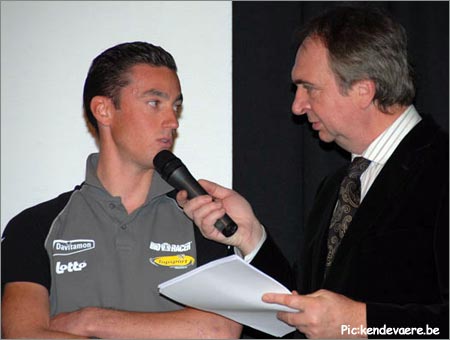 Ken Sez: At the team presentation.

PEZ: I guess the Tour of Belgium is a bad memory because of your crash, what happened?
Ken: We were just 3 kilometres from the finish, I was in good shape and I was preparing to do a great sprint. I was able to get the wheel of Gert Steegmans, at my right side there was a manoeuvre and I lost control of my bike, and I crashed, just between a car and a stone wall! That day I was very lucky it could be worse.

PEZ: Which races on your calendar for this season do you want to do well in?
Ken: Normally I was looking out for the beginning of the year, but I have a problem with my hip, so I have a delay and probably I will start later in the season. I hope like every year to do best in the pro races especially Ronde van Belgie and Parijs-Brussel!

PEZ: And the future, how would you like to see you’re cycling career progress?
Ken: I love cycling so I hope that I can do it still for a long period, and hopefully after this year I have a real pro license.

PEZ: Of all the races in the world which one would you like to win?
Ken: Any pro race!

PEZ: Have you any heroes, cycling or non-cycling?
Ken: When I was little it was VDB (Frank Vandenbroucke) in his great years.

PEZ: Is cycling in a bad state at the moment?
Ken: Yes I think it’s very hard to find sponsors. And there should be more teams like Topsport-Vlaanderen Mercator (pro continental) there are just not enough spaces to become a pro racer. So that good riders still have to ride without any financial support. And so sometimes talented guys give up.

PEZ: What advice would you give a young rider?
Ken: Don’t start too young, and when you do, don’t be too serious at once. It’s just biking and the only thing that counts is to make your legs move. 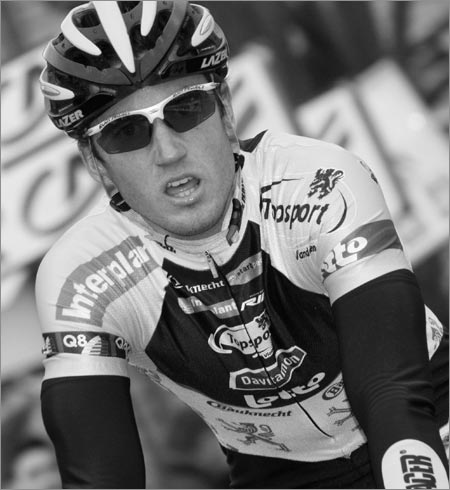 PEZ: What is your favourite Belgian beer?
Ken: I don’t like beer so much, but sometimes I drink a Leffe.

PEZ: Do you eat frites (French fries/chips) and mayonnaise?
Ken: Only “frietjes” I don’t like mayo.

There you have the word from a level headed young Belgian who is lucky enough to have a team, unlike many other riders all over Europe and beyond. Good luck for the season Ken.

Paris-Nice’09: Fleeman Wraps It Up!