One of the most impressive guys in pro cycling is Joxean Fernбndez Matxin, better known as “Matxin”. At only 34 he is the ds of Suanier Duval-Prodir – a ProTour team he helped create with friend and ex-pro Mauro Gianetti. We wanted to know how someone so young steps into the big leagues…

We met Matxin at the Saunier Duval-Prodir training camp and team launch in Spain back in January. At first, you might mistake him for one of the riders because he looks like one. Then when you see him joking and carrying on with everybody, and you really think he must just be another member of the team. But when it’s time to go to work, it’s clear who’s in charge and what everyone’s job is. 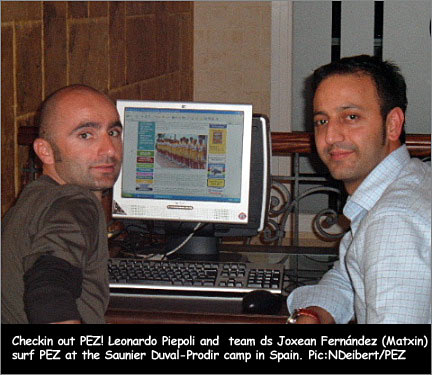 ND: So why does everyone call you Matxin?

Matxin: Oh, that’s simple it’s my second last name. Here in Spain everyone has two last names, your father’s and you mother’s. Since Fernбndez is a very common last name, I go by Matxin to distinguish myself from others.

ND: Your profile on the Saunier Duval web page doesn’t really have any info. Tell us a little about yourself.

Matxin: When I was younger, I raced as a junior and then in the Sub-23 category. At age, 21 I was offered a pro contract with CHCS. Olano was also going to be in this team but we didn’t even make it to the first race and the team folded. Most of the guys found other teams but I decided then to not continue as a pro rider. The next year, when I was 22, I formed my own team, Gas Euskadi. A little known 23 year old Oscar Freire was in that team. From there I moved on to the Mapei – Saunier Duval development team until I was 28. I then moved into a DS role at Mapei – Quickstep at age 29. I remember going to the GP Plouy as the main DS with the core Italian riders in Mapei at the time and they were almost all older than I was. When Mapei stopped their sponsorship I moved to Vini Calderola and there I met Mauro Gianetti. Finally, last year Mauro and I formed the Saunier Duval – Prodir pro cycling team. I work very well with Mauro, we’re great friends. We’re both very young for the jobs we have in cycling but we both have lots of experience.

ND: The ProTour, good or bad or ugly?

Matxin: The change is good, but in this change, there are good parts and bad parts. Unfortunately, it seems that it will cause a very clear divide between the rich teams and the poor teams. It seems to me that there needs to be a rule or method of how teams can be promoted to the ProTour and how teams can be relegated out of the ProTour. I think that we are probably the ProTour team with the smallest budget, but we will also show that we have the desire to win and are capable of doing so. I have the best riders in the world and I wouldn’t trade even one of them for anybody. They know I expect 150% and we all give it. The worst thing we can do is finish second. I hate second place.

ND: For 2005 you’ve signed two riders at very distinct points in their career’s, Andrea Tafi and Arkaitz Duran. Why Tafi now, and why Arkaitz so young?

Matxin: I know Tafi from my days in the Mapei organization and we have a very good friendship. He found himself at a point in his career where he wanted to leave cycling on a good note and nobody else seemed to want to give him a chance. I think that when a pro comes to you and offers his services in return for a uniform and support and not money first, you have to give that person a chance because they are genuine in their motivation. We also realized that Tafi could give a lot to this team in terms of experience and so it was a win, win situation for everyone. As for Arkaitz, that is a personal project of mine. I like to go to the amateur races, whether they are Sub-23/Elite or junior to see what kind of talent is coming through the ranks. He is a personal project that I’ve taken on. I could tell that he was mentally prepared and physiologically superior to his competition (Side Note: Arkaitz was winning junior races here in Spain by up to 8 minutes over his rivals). I decided to take this project on with the idea of educating him as a pro in four years.

ND: I understand that last year after the Clasica San Sebastiбn, Perdiguero said that he wanted to continue in the team. What happened?

Matxin: Right after San Sebastiбn, he signed a two year contract with Saunier Duval – Prodir. However, Phonak came to him later and offered him about four times the amount of money he would have earned with us. He was very happy here and we were happy to have him, but I let him go. In this team, we don’t have individuals, we have a team. In addition, we don’t keep people in the team against their will. That would create an environment where some people wouldn’t be giving their all. For that very reason we let Beloki go at the beginning of this year. Perdiguero was a very good friend of mine and I wish him well. I have a feeling some day we’ll work together again. My riders know from the very beginning of the season what races they will do and what I expect of them. We’re a team and we win as a team. 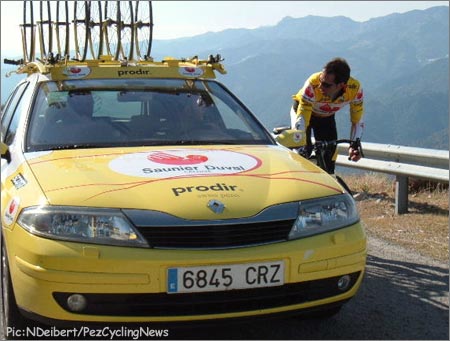 Matxin in his favorite chair – the driver’s seat of the team car.

ND: What’s your opinion of possibly taking radios and TVs out of the team cars?

Matxin: I place a lot of importance on tactics. It’s how we win. I think that without radios, racing in general would be less competitive. Having the radios allows me to communicate directly with my riders and gives me the opportunity to always be looking for the moment to attack and be a protagonist in the race.

ND: How are you planning to confront the 2005 season with the requirement to do so many races that maybe in the past SD-Prodir wouldn’t have done? Who will be the leaders for the grand tours?

Matxin: We are very happy to be in the ProTour and to have our calendar guaranteed. This helps me with my desire to be able to tell my riders from day one of the season what races they will do and what will be expected of them in each race. We’ve expanded our roster for 2005 and that will help make sure we have strong riders in every race we do. As for the grand tours, our principal riders will be the following:

In the Giro, we’ll be looking for stage wins and for Garate to do well in the GC. In the Tour, our main objective will be for Marchante to win the white jersey (best young rider) and to get some stage wins. For the Vuelta, I want to win. 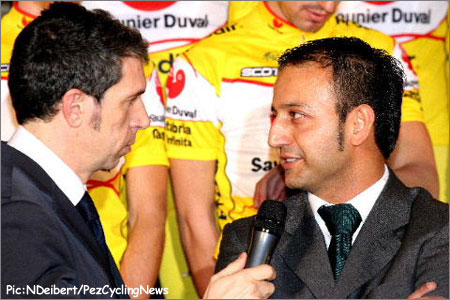 Matxin: One more thing I’d like to add. I take full responsibility for how this teams performs. For that reason I check on my riders. For example, if we have a race on Saturday I call my riders on Tuesday and usually on Thursday too. I ask them how they are doing. If they tell me good both days and then on Saturday at the race that they aren’t going well, I get very upset. I don’t accept excuses. I expect 150% from everyone. I hate second place and I would rather win a stage in a grand tour than have somebody finish eighth in the GC. Eighth is shit and nobody remembers who finished eighth in the Giro, Tour or Vuelta. However, I’m very friendly and easygoing with my riders. I even go on vacation with them, but when it’s time to work, they know it and do it well.

Once again, it shows that the attitude of hard work and desire to win is clearly transmitted from the top of this organization. Matxin (who is much younger than most other directors in pro cycling) seems to have found the right balance between being a demanding hard nose and relaxed friend to his riders. His method obviously works as his team notched up 18 wins last season. Only time will tell how he and his team adjust to racing the most important races on the calendar in 2005.

I would like to thank Matxin for taking the time to speak with us. We wish him and the entire team good luck on a hopefully successful season.