Rider Interview: Nils Politt is a big guy, standing at 1.92meters (6ft 4in) and weighing in at 80kg (180lb), he is just the rider Alexander Kristoff would want by his side in the Northern Classics. Alastair Hamilton managed to have a word with the big German at the Katusha-Alpecin Spanish training camp in Benidorm in December to hear about his first year with the WorldTour team.

Nils Politt joined the Katusha team at the start of the 2016 season after a stint as a stagiere with the team at the end of 2015, he was only 21 years old. At this early age he was thrown in at the deep end of the first spring Classics and came out smelling of roses and was asked by team leader, Alexander Kristoff, to be at his side in the Monuments. All in all it was a dream of a first season. 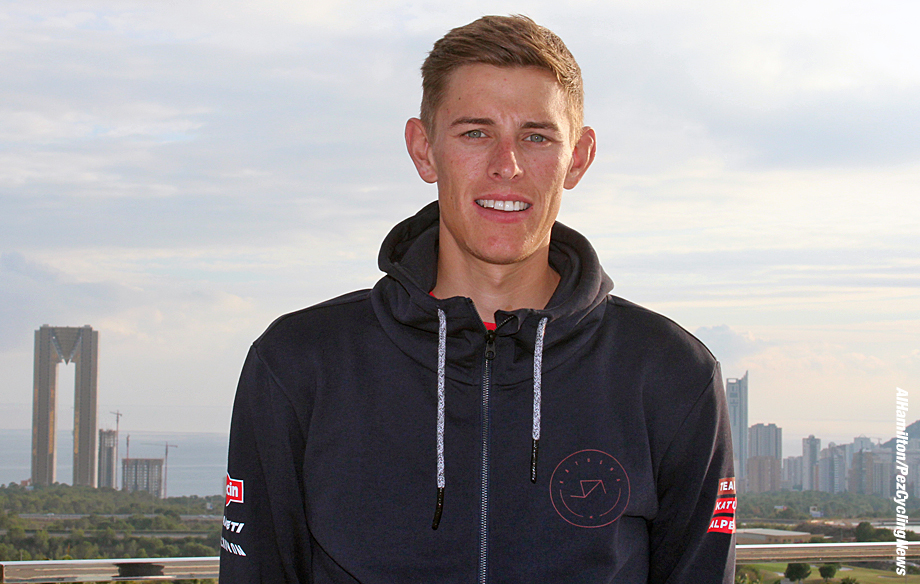 PEZ: You had a really good spring in 2016, helping Alexander Kristoff a lot, and from then on he wanted you with him.
Nils Politt: The spring for me was really nice, it was my first year as a pro. The first races had some hard days for me, and I did a lot of work for Kristoff, I think in Kuurne-Brussel-Kuurne (Kristoff was 2nd behind Jasper Stuyven of Trek-Segafredo – ed) I did a really good job there for Kristoff and the team said maybe I can go for myself in some smaller races in Belgium, so in the smaller Classics I could go for my own results. I tried it and I got a 5th place (Le Samyn) and I was really happy. I was also the leader in West Flanders (Driedaagse van West-Vlaanderen) and I was in really good shape there and so was a certain for CG and on a stage (3rd on stage 2 and 3rd overall), so the team were really happy with me and after that I did the two monuments: Vlaanderen and Roubaix. For me, for my first year made me really proud and really happy. With these races I was happy also, in Flanders I was in the break-away and did a good job also for Alexander on the last time of the Kwaremont and I think he was really happy with me. Then on the Tour des Fjords, on one stage I caught the break back and helped him to win the stage and the Tour.

PEZ: Were you nervous when you came to Katusha, you were only 21?
When I came to the team last year, for sure I was nervous, but also for me it was a new team and my English was not the best and there were a lot of new guys there and Russian guys and a lot of other guys form other countries, so yeah. Also in the spring for the first races I was really, really nervous there, but in the end it was perfect so I am really happy with the season.

PEZ: What kind of rider would you say you are?
I like the Classic races. I live close to Belgium, only 80K’s to Belgium, so I did a lot of races with the juniors there and so they are my races with the cobbles and the wind and sometimes with the short, steep climbs and the bad roads, this is what I love. But I also love time trials, I’m not so bad in time trials. I think in the future these two disciplines will be my future. Like in De Panne; I did a good job in the prologue, I was 10th. Normally I don’t like the short time trials, I like more the longer distance, over one hour. I can do a good prologue and that is good for the short stage races, it means I can go for a good result in the GC. 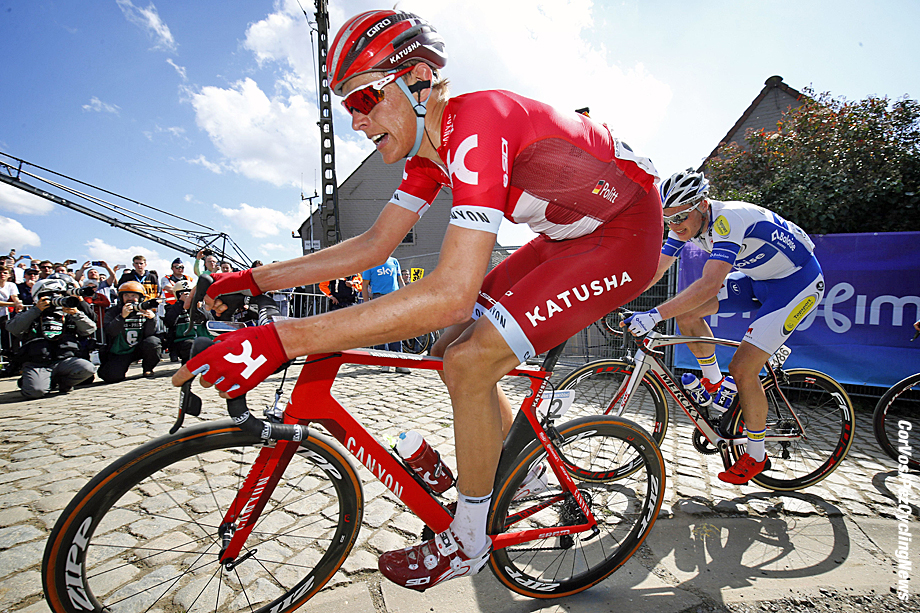 PEZ: So is your future the short stage races or the Classics?
Yeah, the Classics. I will really try to go in the Classics for a good result, maybe next year or in two years or three, I don’t know, for this I need time. I need to get more experience there and to learn a lot of things.

PEZ: Do the Grand Tours interest you at all?
For Grand Tours, for sure to help. I don’t know, maybe next year will be my first Grand Tour. I don’t know the program for 2017 yet, but the sports directors say it might be possible that I will go to a Grand Tour, but I don’t know which one. 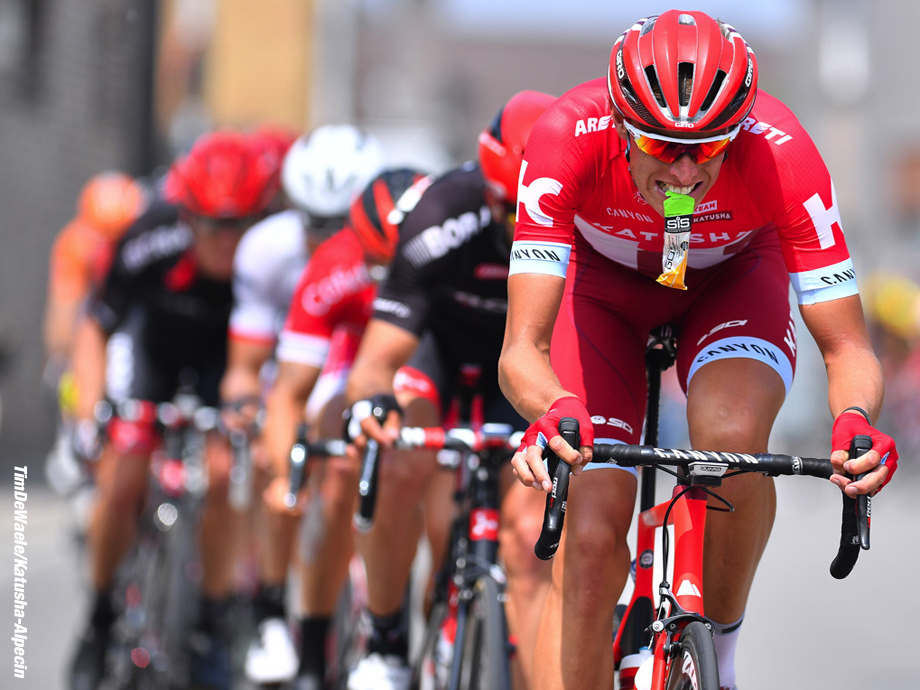 PEZ: Will you go to the Tour Down Under?
No, I start my program in Qatar. I finished last season there and I start this season there.

PEZ: Did you find it quite a step-up coming from your previous team (Team Stölting) to Katusha last year?
For sure. I came from a Continental team, and you have to wash your bike on your own and now you come to Katusha and you have a lot of mechanics and a lot of staff, physios and soigneurs and a big buss and cars… It’s a different level. For the riders it’s really nice. It’s like when you come from a 3 star hotel to a 5 star hotel. 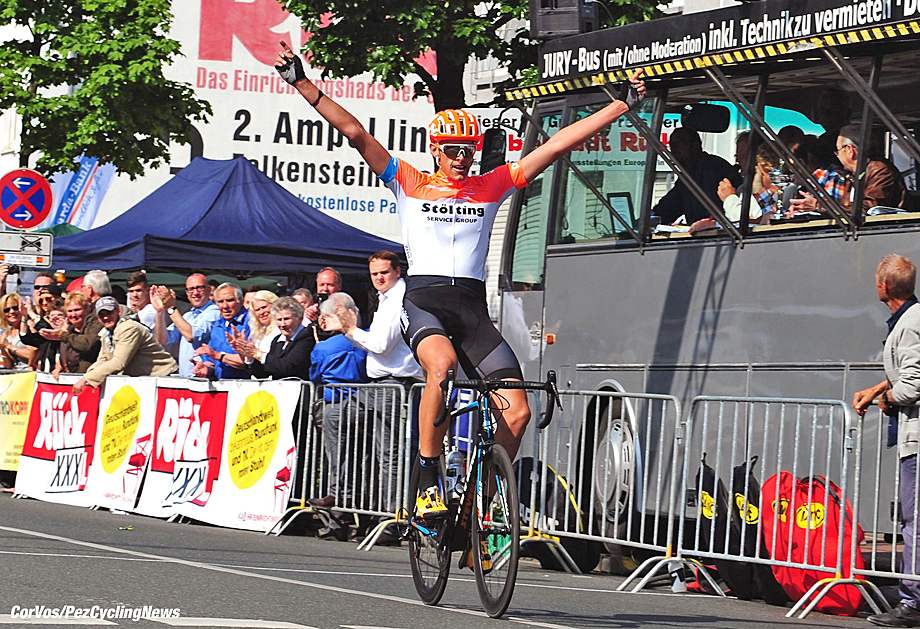 A win with Team Stölting in Oberhausen

PEZ: You come from Cologne, so do you feel you have come up more through the Belgian system than a German one?
Yeah, I did a lot of races there, for me it was easier. In Belgian races there was a big parcour of 10 kilometers, while in Germany it was maybe only 2 or even 1 kilometer, just small crits. Also in Belgium they would go full gas from the start, in Germany I was one of the best and so when I went to Belgium it was really hard for me as it was directly full gas and pulling.

PEZ: Has the racing scene improved over the last few years in Germany?
Well, now it has started again at a new level in Germany, so next year we have a Grand Tour there with the Grand Depart in Dusseldorf. For the young guys it is also nice. OK, ten years ago we also had a good level with T Mobile and then came all the shit, so now we try to come back up out of that again. 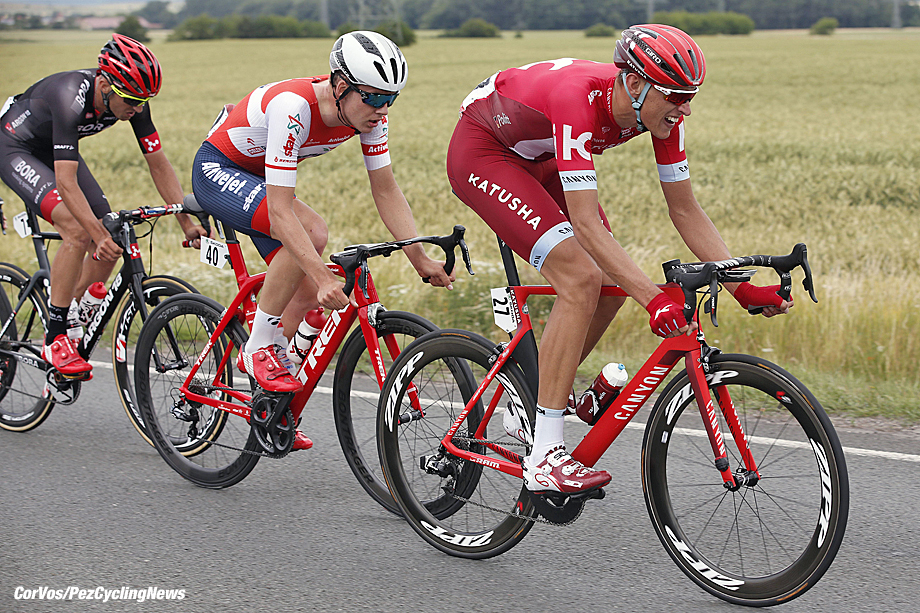 PEZ: Would it be difficult for a young guy from Germany to become a pro cyclist?
Yes, because everybody in the social media is talking of doping, but we try to give our best and all I can say is that we have a lot of doping controls and also for the young guys we try to bring the sport to a higher level. In Germany it’s only football, so we have to keep trying.

PEZ: Does that make a difference to you, apart from getting free hair products?
Maybe my hair will be better next year, I don’t know. We get shampoo from Alpecin now, so… 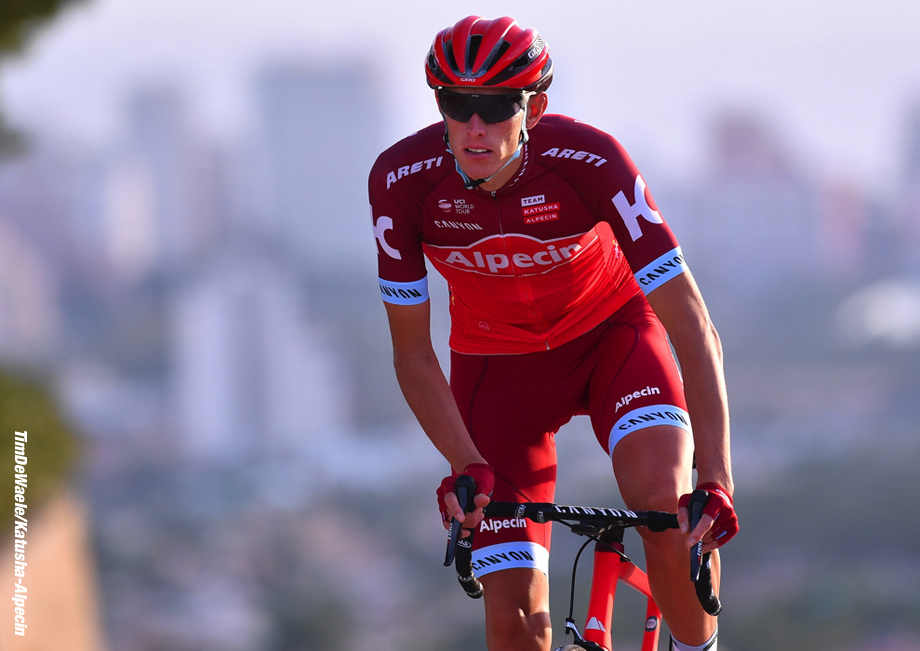 “Maybe my hair will be better next year?”

PEZ: Will you do publicity work for Alpecin in Germany?
Not yet, but last year Alpecin did some TV adverts during the breaks in the Tour de France, so maybe they will do them next year again, but I’m not sure. For us it’s good and also for Alpecin and for the brand of Katusha.

PEZ: Where do you think you will be in two years or five years time?
For sure I will keep trying. In this sport there is a lot that can change and you never know what can happen with the sponsors and with the teams, but I hope that I can stay a long time in this sport. For myself, I will try to ride well in the Classics and maybe win one good Classic. 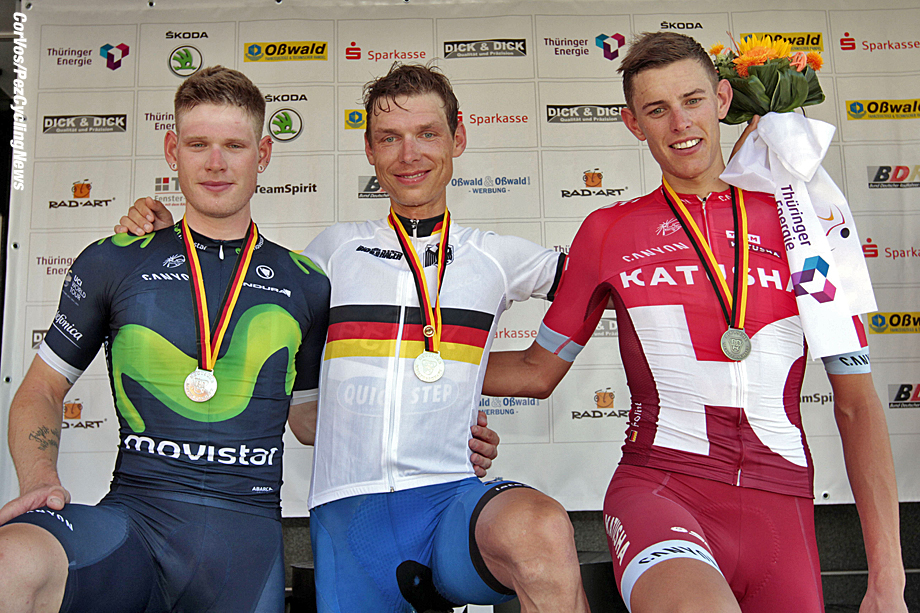 PEZ: Will you concentrate on time trials at some point again?
At the start of the season I only concentrate on the Classics, I will do time trial training, for sure this year I have to do. After the Classics there will be time trials; the national championships and maybe at a Grand Tour and the World championships, but next year the Worlds are really hard, there is a three K up-hill at the end, that’s not the best course for me.

PEZ: I guess the German team is kind of difficult.
Yes, we have the World champion in the team, so… 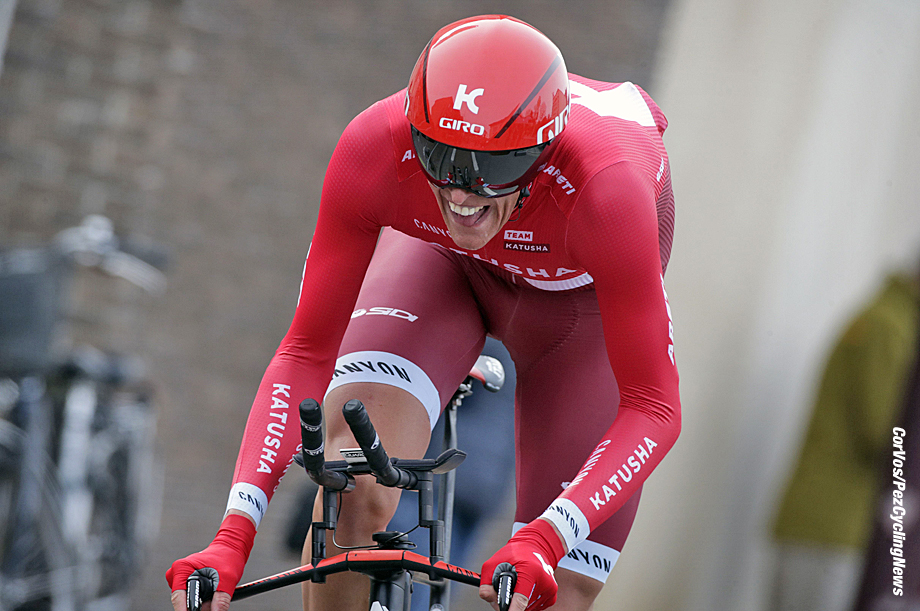 PEZ: How is your form now at this time in December?
I’m now in my third week of training, I had a three and a half week break after Qatar, so now the shape is not the best, but OK we are here in Calpe and I’ll be trying to change that. We have two months to go to the first race and in those two months I have three more training camps, so I’m sure I will be in shape for the first races.

# Thanks to Nils and the Katusha-Alpecin team for the interview and good luck in 2017. # 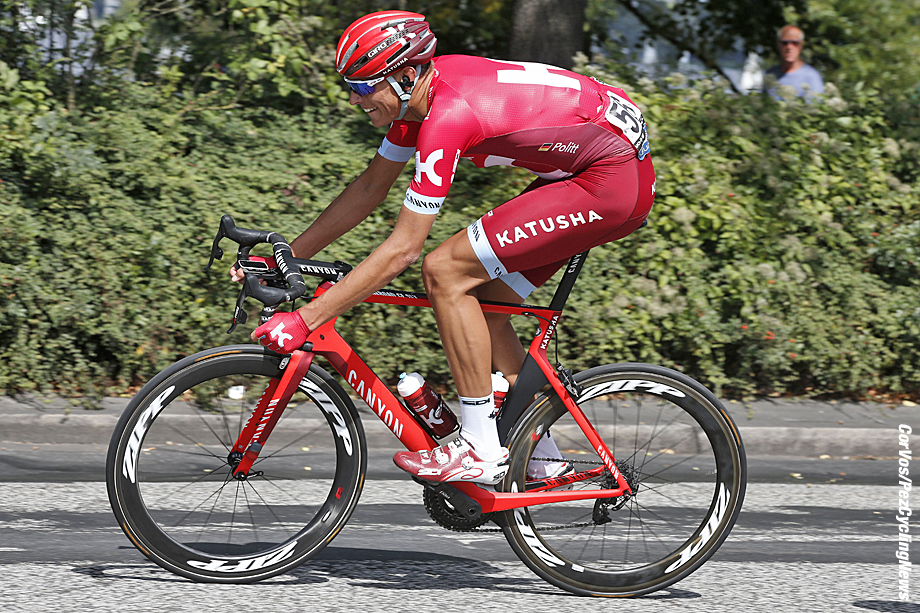 At the Euro Eyes Cyclassics in Hamburg

Behind The Iron Curtain: Dedication, Determination And Desperation!