Rider Interview: The keirin can be one of the most exciting events on the velodrome – ‘It’s much like chess but with head butts and shoulder charges!’ So said British keirin rider Joe Truman when Ed Hood asked him about his Japanese experience. 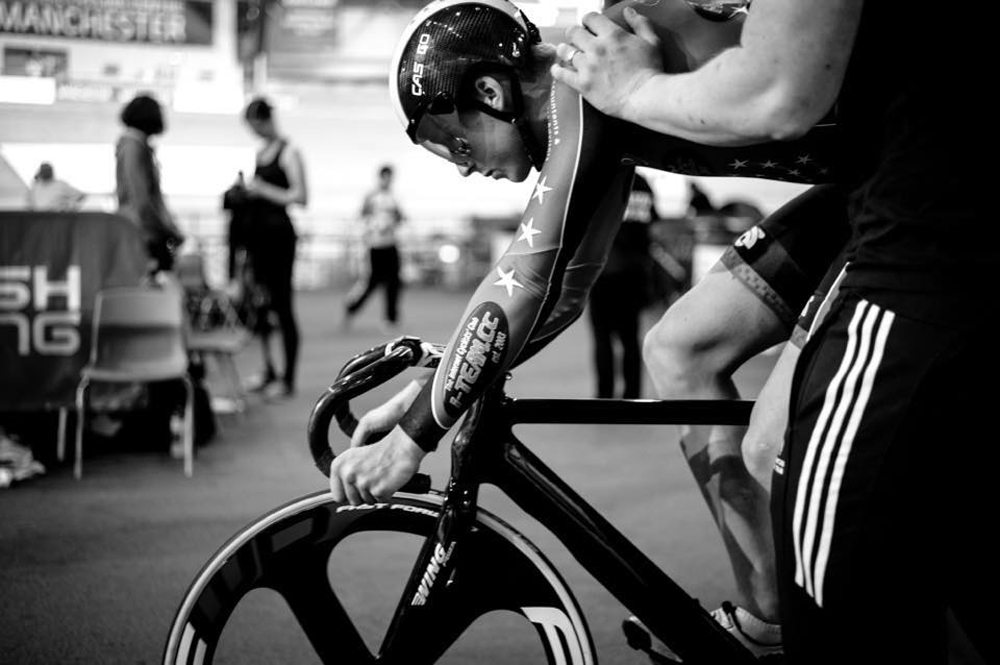 Keirin, love or hate it; even the current ‘UCi decaffeinated’ version can still produce spectacular racing. I love it, having grown up during the discipline’s early Worlds days where ‘no quarter asked or given,’ hard men like Danny Clark, Urs Freuler, Guido Bontempi and Ottavio Dazzan provided the proverbial ‘thrills and spills.’ 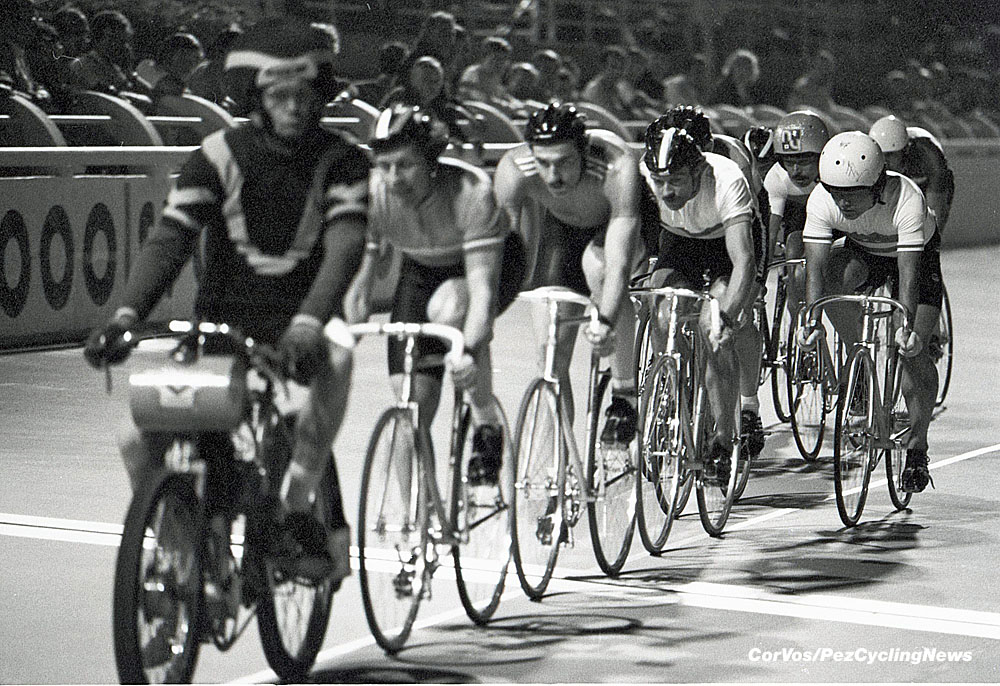 Back in the day – Worlds’80 Keirin: Nils Fredborg, Urs Freuler and Danny Clark

When I listened to a podcast featuring ‘Englishman in Japan’ Justin McCurry, who wrote a book about keirin called, ‘War on Wheels,’ I thought, ‘I best have a read of that!’ A man who featured in the book was British track specialist Joe Truman, who ‘guested’ on two occasions on the lucrative but tough Japanese keirin circuit.
He’s a highly successful track man with a raft of medals at National, Commonwealth and European levels across sprint, team sprint, kilometre and keirin disciplines. I caught up with Joe and he very kindly gave his memories of his days in the highly specialised and fascinating world of keirin.

PEZ: Remind us which GB programme you’re on – how did GB management feel about your Japanese adventures?
Joe Truman: I’ve been on the British Cycling ‘Podium’ programme since 2017 and it was actually my sprint coach, Jan Van Eiden who helped get me the invite, it was early in my career and going to Japan didn’t cut across what I was doing with the GB programme – in fact Jan felt that it would be good training and the experience would breed independence and self-sufficiency.

PEZ: What’s your favourite ‘Euro’ discipline – keirin, kilometre or team sprint?
I spend a lot of time training for the team sprint, that’s what’s important to British Cycling but I most look forward to the keirin, albeit the rules are stricter than they are in Japan – but it’s still, ‘all guns blazing!’ 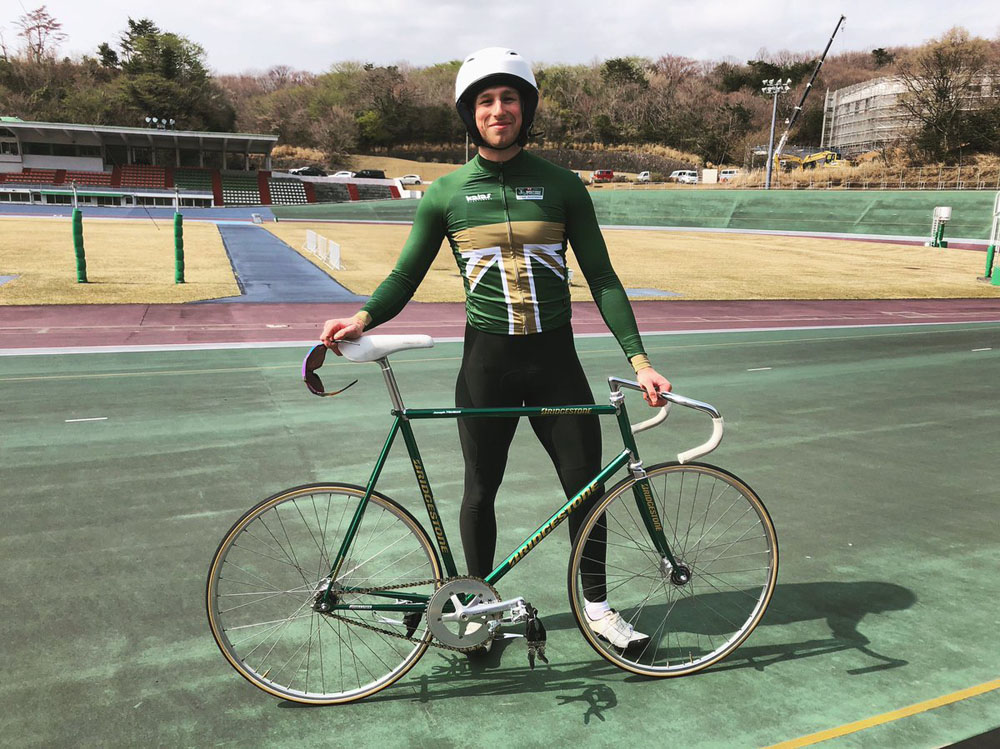 PEZ: How did your Japanese adventures come about?
As I said, Jan Van Eiden’s connection was very helpful but I’d been in finals at World Cups and Europeans and I was approached by the Japanese.

PEZ: Do you have to do the two weeks at the famous keirin training school each time you go or just once?
Both years but the first year was more intensive, stuff like stripping down and rebuilding your bike to a set, very methodical protocol; the box spanner has to go back in exactly the right place! The second year was easier and went by faster. 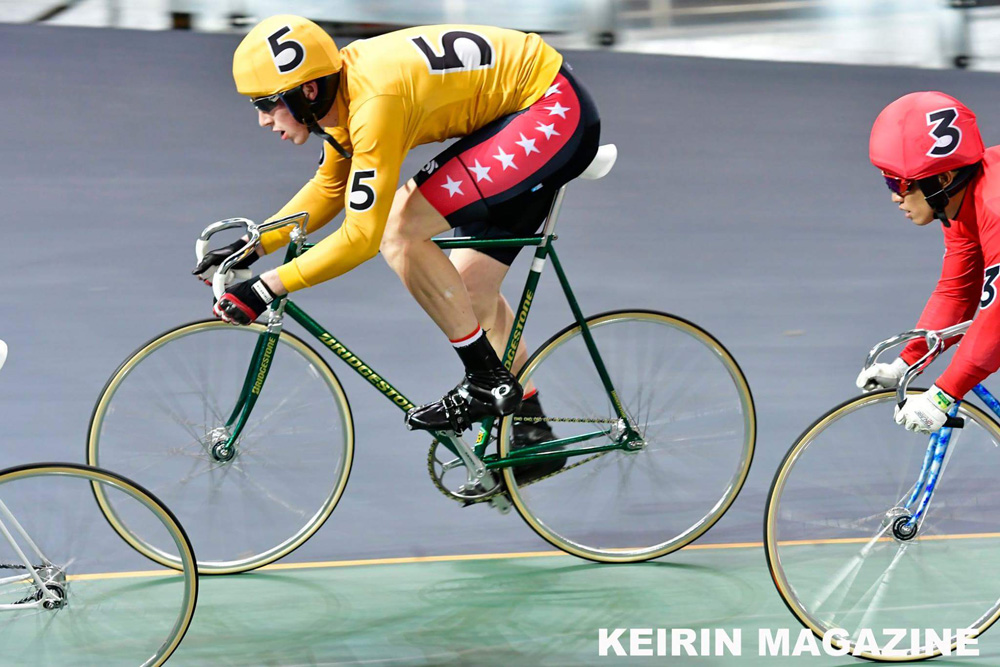 PEZ: Tell us about the school.
There are four velodromes, two gyms, dormitories, cafeteria, five kilometre road circuit, media rooms and of course that crazy steep ‘wall’ you have to sprint up.

PEZ: You had to buy an approved steel frame to compete – tell us about that.
There are only a certain number of frame builders approved by the NJS, ‘Nihon Jitensha Shinkokai,’ the body which approves everything – every frame and individual component must be approved by the NJS. Some of the frame builders are legends, guys like Yoshiaka Nagasawa and Yoshi Konni; but I went for a Bridgestone – it’s still out there! It’s crazy different from my GB carbon bike, the same geometry but really flexible, its smooth, quiet and nice to ride. 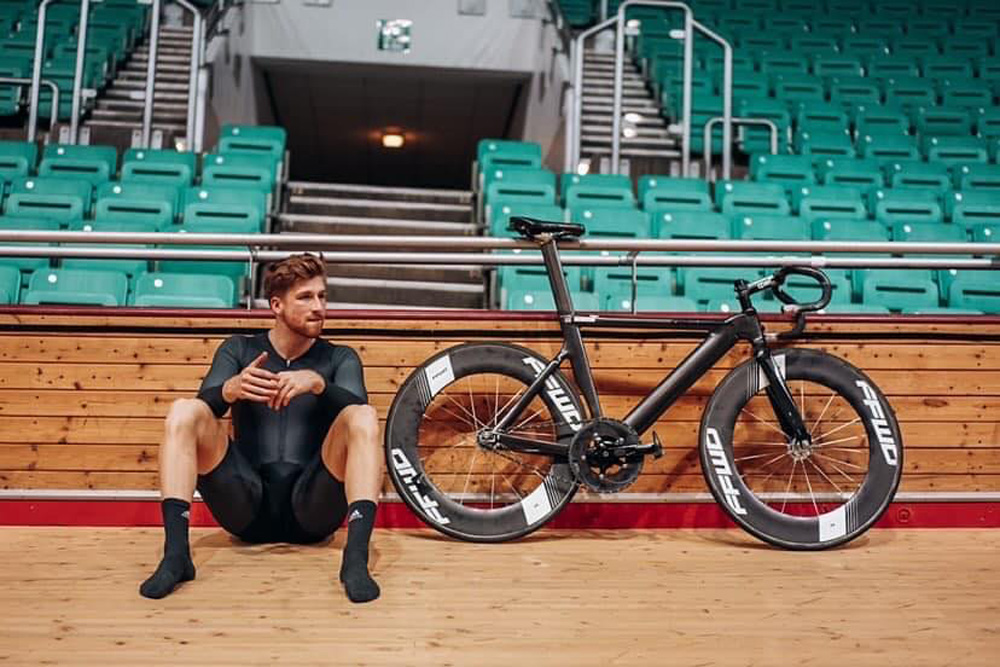 PEZ: What’s the situation with gear selection, is that dictated too?
I ride 55 x 14, that’s 106” – but in UCi races in Europe I’d be on 120”, although you have to remember that keirin tracks are all outdoors. But gearing also depends on which way you’re going to race, you have to declare your tactics before you get up and race – ‘Senko’ is going long 400 to 800 metres out, ‘Makuri’ is going within the last 300 metres whilst ‘Oikomi’ is going very late, within the final 150 metres.

PEZ: How does Japanese keirin compare to UCi keirin?
You only have one race per day, there are 12 races with 30 minutes between them over six hours to give the punters time to get their bets down. It’s quiet between races but erupts when the races start. A meeting lasts four days with the top three going through to finals and the lesser ranked riders racing against each other. It’s way more physical than UCi keirin; but bear in mind you have nine riders in each heat, not six. And races are never called off due to weather, you race in the wind and rain – the velodrome surface is gritted so you get grip, even in the wet but it’s still scary the first time you see the bankings looking like waterfalls! 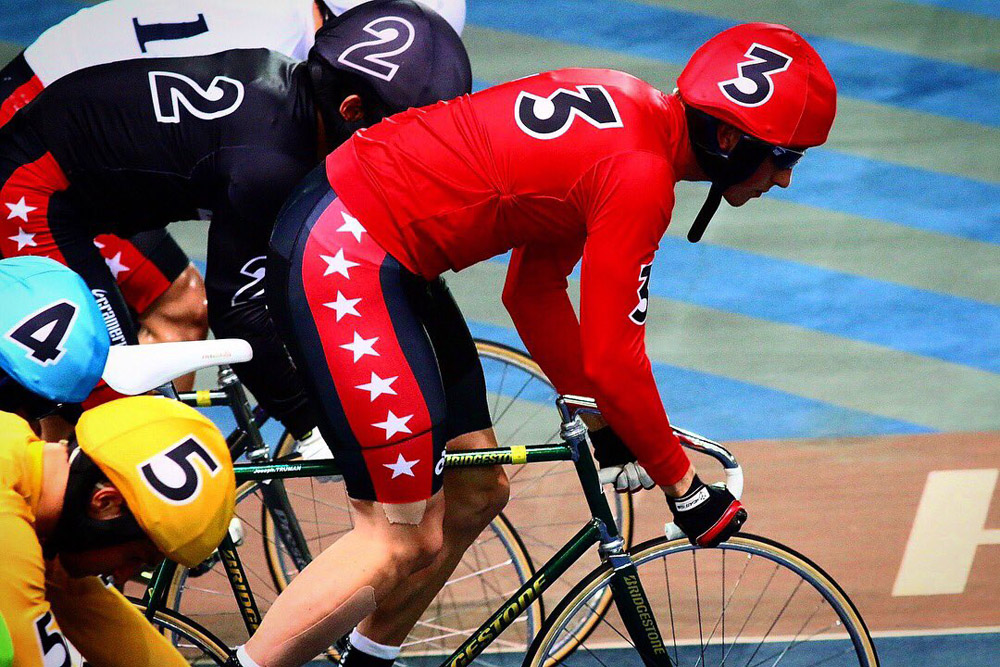 PEZ: Tell us about the ‘isolation’ aspect.
To prevent any possibility of fixing races, you’re not permitted any contact whatsoever with the outside world – no wi-fi, no Bluetooth, no phone for the duration of the meeting. I’d take hard wired earphones and books – it means you interact with the other riders, socialise with them, I didn’t mind it so much.

PEZ: Explain, ‘The Line’ to us.
You have nine riders in three lines of three and then there’s all the tactics I mentioned earlier – it’s much like chess but with head butts and shoulder charges! 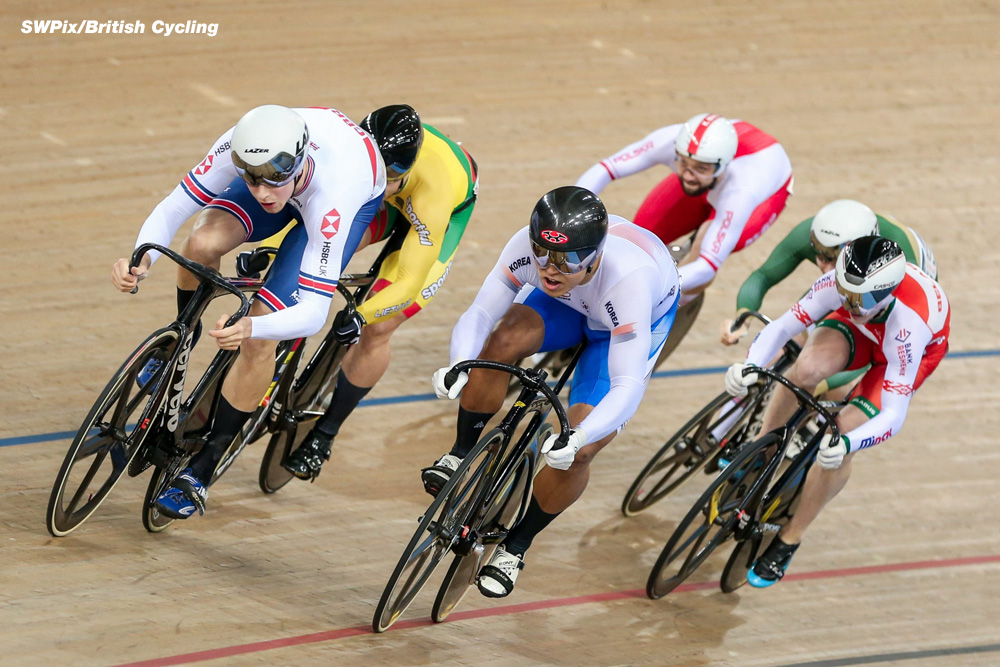 PEZ: I believe that the Japanese guys do their best to work you over?
Yes, the lines are by ‘prefecture’ – we’d say ‘district,’ I’d be in the keirin school line so sometimes it would end up eight Japanese guys against me !

PEZ: How often did you go over and how long did you stay?
I went for six months in 2018 and five months in 2019, I’d like to go back but Covid has put paid to international invites to the keirin circuit. 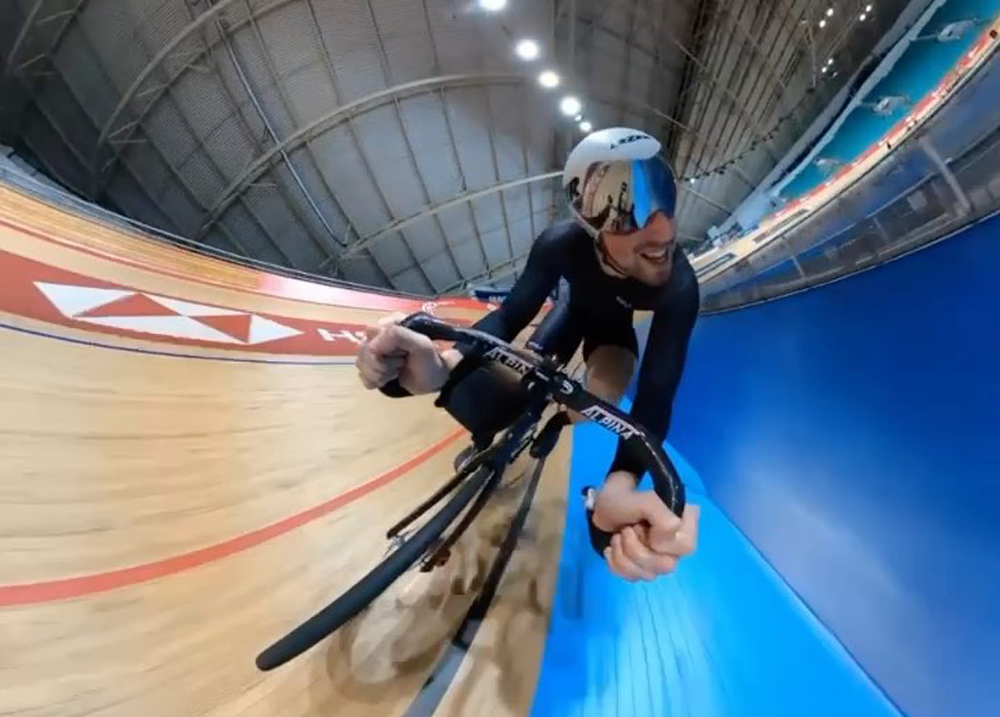 # Safe to say that he’s not a bad keirin rider then? With thanks to Joe for an entertaining interview. And thanks to all the photographers. #