“Hey, if you guys want to back it off a few, so you pull longer, I wouldn’t mind. I’m dying back here.” says Kenny Labbe of the US Postal Service Presented by Berry Floor cycling team. I take his words lightly, for I am quite sure we are not making him die at our 22mph pace, but we back off nonetheless, happy to placate the easy going Mount Prospect, Illinois native.

We are on a training ride with two other riders, Kurt Rees of ABD, and Alan Abrams of 2CC, both prominent clubs in the Chicagoland area. We’ve ridden up to Lake Geneva, Wisconsin, stopped for coffee and 4-for-price-of-2 day old muffins. A loop around the hilly and scenic Snake Road, and we’re homeward bound, with just a breath of a tailwind at our backs. Our legs are moving in a steady though unconcerted ryhthm. The sky is a perfect shade of blue, clouds puffy and scarce, with nary a hint of wind – the perfect day to put on some miles.

I had a feeling while we chatted on the ride, and then confirmed this later in a phone conversation; Kenny Labbe has perhaps one of the most down-to-earth personalities I have ever seen from a rider in the pro ranks. Light, easy going, midwesterern mannered, we talked over a range of topics.

Kenny came to cycling as a youth, simply for the reason that he “wasn’t good at any other sports” illustrating this point by revealing his position on his first baseball teams: “reserve right fielder”. As an 11 year old, a bicycle ride from his Illinois home up to Paddock Lake, Wisconsin, on his BMX bike was the start of something big. By 15, he had his first USCF license. By later teenage years competing in Junior Nationals and Superweek, with and against the likes of Hincapie, Julich, Ventura, and a host of other talented juniors. He was crafting his skills as a tough nosed domestique early on, working for his teammates all over the US, primarily the midwest. Then some training in Switzerland, then the jump to Albuquerque, New Mexico, after turning senior in 1990 to go live the dream. Having signed on with New Mexico Velo Sport he slugged it out for two years, continually honing his skills as a support rider, dreaming of making the trip to Barcelona for the ’92 olympics. 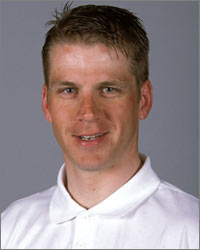 With the bills not getting paid, and not having made the Olympic team, Kenny was adrift. After two years in the trenches it was homeward bound, to train hard and get a day job to make some cash. And it just so happened that he landed a gig as a letter carrier in his hometown. For four years he walked the streets by day, and rode his bike by night, competing in hundreds of local and regional races, and doing rather well. Having upgraded from Category 2 to 1 and acquiring his pro license, he took at a stab at something big – he sent his resume into Mark Gorski of the US Postal cycling team. Thinking that being an actual postal worker would be a marketing benefit to the team, he took his chances sent it in, naturally via USPS. In December of ’96 Kenny put his application in and waited. And waited. And worked. And waited. And trained. And worked. And raced.

In 2000, he received an invite to the training camp in San Luis Obispo, California. Unlike other riders who come to camp a little raw and rode themselves into shape, Kenny had spent the week previous slogging 900 miles on his bike. Training for training camp. Having impressed the team elders sufficiently, Labbe was offered a spot on the teams domestic roster, and off he went.

You can see Kenny all around the midwest, from Snake Alley up to the Northbrook Velodrome and all parts inbetween. In the races, he’s hard at work for teammate Robbie Ventura, doing the yeoman’s work without question. IN the national races, it’s more of the same, whether it be San Francisco or New York.

But it’s when he’s asked what he’ll do after cycling that you get a feel for the type of guy Kenny Labbe is. When probed as to whether or not we’ll see a Labbe School of Racing after his racing career, the answer is not what you’d expect: “A racing school? No, not me. What I’ll probably do is just work a little overtime at the post office to help maybe cover some juniors entry fees, or something like that.” Now that’s level headed class if I’ve ever seen it.

Kenny will be racing in NYC on Aug 3rd, Downers Grove Illinois on August 17th, and then most likely off to San Francisco.

Vuelta Announces The Teams For This Years Race