We recently talked with Kevin Livingston – climbing ace and home-grown alpine hero, about his life as part of the first graduating class of true American pros, the current state of the peloton, and what’s next…

PCN: How did you first get involved in cycling?

KL: I started riding when I was 13, I had an uncle who was a cyclist who first got my older brother into the sport. My dad bought him a bike so of course I wanted one, too. My brother naturally recruited me as his training partner. I saw the Tour on TV and got into
it. In 1988 I was competing in tourists races and I was always pretty competitive so I thought that I could win everything. In ’89 I got involved with the Spirits of St. Louis racing team and got 7th or 8th at Junior Nationals that year. From there I went on to the National Team. 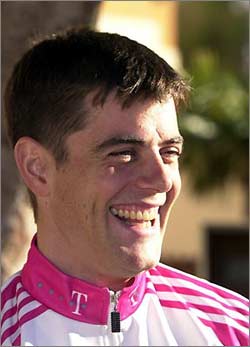 PCN: Did you always know that you wanted to race professionally in Europe?

KL: Of course when you’re 14 or 15 it’s a dream, but it just kinda progressed that way. Let’s just say in high school I studied French so I’d be able to communicate if I was racing over there. I signed my first pro contract with Motorola in ’95 and get the opportunity to race in Europe with them.

PCN: What do you think are the biggest differences between racing in Europe and racing in the U.S.?

KL: The sport in Europe is so much more popular, it’s like our football or our baseball. Obviously the advantage for Europeans is that it’s part of their culture so their raised knowing the sport and how challenging it is. All of the different nationalities in such a close proximity also raised the competition level a good deal.

PCN: What would you rate as your best achievement as a professional?

KL: Not one thing sticks out in my memory – I may not have won a lot, but things like the ’99 Tour where I was able to do a lot for Lance or in 2001 when I was helping Jan were great times. There has to be a lot of time s during the year where you have some success or the motivation to continue disappears.

PCN: What was it like riding for Telekom as compared to Cofidis or US Postal?

KL: Telekom is just way over the top as far as how well
organized and run it is, that made it great. Also, I was the first English speaking rider on the team and that made it an exciting event for myself and for Telekom. Not that US Postal wasn’t well run, either. 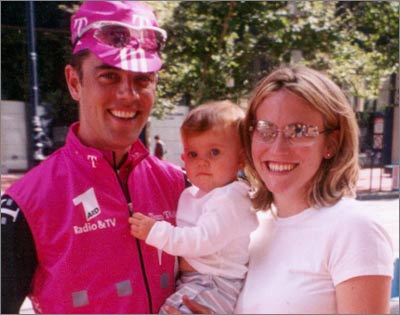 PCN: Were there any problems with you Cofidis team in ’97 after it had been discovered that Lance had testicular cancer?

KL: True, I was pretty much brought on the team by Lance so when he got sick in ’96 he told me that I needed to go out strong in the beginning of the season to gain the respect of the team. I was going well until I broke my collarbone – then Bobby and I got a lot of
respect in that year’s Tour and I also placed 2nd in the Tour de l’Avenir. I never really had a problem with Cofidis.

PCN: And the Lance situation? I know there was a lot of controversy when you signed for USPS‚ rival Telekom, how is the situation now?

KL: Oh, it’s fine, it’s been 2+ years now, when I first switched teams there was a period when we didn’t see each other at all, but once I started seeing him at races we spoke and it was fine. I benefited a lot from my time at USPS, but at the time it was normal that Telekom wanted me.

PCN: And the Ullrich situation?

KL: I was with Jan for 2 years at Telekom so I got to know him pretty well. I didn’t really see him much this past year except when I was training near his home in Germany. His biggest focus this last year was recovery for his knee and all I’ve really kept up on
his situation was what I’ve read in the press. It was a little surprising he didn’t go to Bjarne Riis’ team, but with Pevenage leaving Telekom to go with Jan it makes sense. Bjarne would’ve have been to Jan what Pevenage was, but you can’t have too many people as
your insider, you know?

PCN: What is your reaction to Denis Zanette’s death?

KL: I read that and I was just sad. He just had a child in May, it’s terrible for him and his family. You know, I’ve been around him for 8 years, seen him at races, made small talk and now – it’s ridiculous to read about the Italian prosecutors opening an investigation on it, cycling is like any other population, a certain number of people are going to have medical conditions, just like any other group of people.

PCN: Do you see anyone in the future as a possible successor to Lance in the TDF? Maybe a young rider that you’ve seen and think will progress to fill his shoes?

KL: Not really – there’s always a lag time between the sport’s great riders, maybe there’s someone with potential, but I haven’t really seen a successor. With riders like Lance, Indurain, Hinault, Lemond you can trace back and see their results as they become Tour
greats. The guys that are challenging Lance now have been around for a long time. I think Dave Millar has a lot of talent, but he needs to focus on a Grand Tour, he’s not old by any means, but it’s time for him to step up.

PCN: What are your plans for the future?

KL: Well, obviously I enjoy cycling and being fit quite a bit, so I’d like to get involved with training and coaching. I like to do camps and also maybe some junior
development. I’m doing one at the end of the month with Austin Outbound (www.austinoutbound.com)where we’re going to have a 2 or 3 day weekend with talks on training and professional advice, lots of riding and training. We’re also going to pamper the athletes with live music, great food, and massages. (editors note: More info can be found
on Kevin’s website, (www.kevinlivingston.com)

PCN: One last question Kevin, can you summarize your career in 3 words and explain your choices?

KL: Ummm – that’s a hard one – I don’t know, that’s three words, right? (hahaha) If I had to, I’d say satisfied through the accomplishments of goals. Also appreciative of the opportunities I’ve gotten, not just cycling, but the friends I’ve made and all of the
different cultures I’ve experienced.

PCN: Thanks so much Kevin, good luck to you.