“Genting? It’s like two Alpe D’Huez’s – one on top of the other!” and Dan Fleeman should know, he was lying on his hotel bed, recovering from just having ridden to 12th place on the monster. The Genting Highlands is the “Queen stage,” of the Tour of Langkawi, finishing at the top of a 40km brute that is always central in deciding who takes the GC.

We spoke to him – over a rather crackly connection. The first four stages saw, in Dan’s words; “nothing much to report.”

Diquigiovanni’s Mattia Gavazzi – who Cristian Fanini tipped us during the winter; “is as fast as Cavendish” – took the first three stages and would have made it four if he hadn’t been unsettled by Chris Sutton hitting the deck just beside him. But even then he was second, holding on to his yellow jersey and tightening his iron grip on the points jersey.

Gavazzi has good genes; his father, Pierino was a cult rider back in the 70’s and 80’s. His palmares include the Tre Valli Varesine, Milan – San Remo and three Italian pro championships among 40-odd pro victories.

Good genes didn’t help much on stage five to Genting though and Gavazzi junior lost 22 minutes, plummeting from numero uno on GC to whatever the Spanish is for 78th. But he didn’t have to worry, the jersey stayed with the team; Colombian Jose Serpa took his third winner’s bouquet for this stage at the top and carried on the good work.

Diqui manager, Gianni Savio will be firing of even more quotes than usual!
But let’s hear what Dan had to say:

Pez: How did the stage go, Dan?

Dan: I was in the leading group with Serpa (Diquigiovanni & Colombia) who won the stage and now leads the GC, but I cracked with six kilometres to go – I’d have been quicker walking to the top, after that! I’ve been trying to work out what happened, maybe I didn’t drink enough, it was very, very hot.

Pez: How tough a climb is it?

Dan: From the bottom of the climb proper, to the top is 18 kilometres, but there are a lot of kilometres running in to it which are going up all the time. The switchbacks in the last five K are around 15% I’d say. I was finding it hard in 39 x 27; but I’ve ridden up l’Alpe D’Huez on the 23 – if you tried to ride Genting in the 23 then you’d just come to a stop! It’s like two Alpe D’Huez’s, one on top of the other! The heat and humidity don’t help – it was 36/38 degrees and 90% humidity.

Pez: It was another “Diquifest” at the end?

Dan: Yeah, Serpa was first, Rodriguez third and Ochoa was sixth. The Aussie guy – Jai Crawford – did really well to live with them. I cracked after I responded to one of their attacks but he was right up there – second on the stage and on GC. 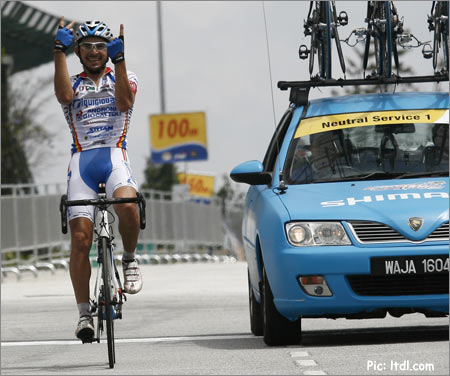 Diquigiovanni’s Serpa stole the day and the leader’s jersey.

Dan: I think they prepare specifically for it; their Columbian and Venezuelan guys are coming straight from a lot of racing in South America; and of course, they’re at home in the mountains, heat and humidity. Gavazzi won the first three stages; stage four was supposed to be “hilly” but there was plenty of time for the sprinters to get back before the finish.

Pez: How was the flight out?

Dan: We put our watches the seven hours ahead for Malaysia as soon as we went on the plane, then did a training ride when we got here, so it was fine, no jet lag or anything.

Dan: Good, the hotels are always close to the finish, so you don’t have long journeys after the stages. In fact, our hotel was just at the spot where I cracked – maybe I should just have ridden straight in!

Pez: Is the race won?

Dan: Yeah, they only have the Aussie to worry about and the last two stages are a flat one and a criterium – they could win both of those too! They’ll do a double job, keeping it together for their sprinter Gavazzi whilst controlling it for Serpa.

But like I said to Dan; “there are no real races until Het Volk, so don’t sweat it, dude!”