The Press Room at a Grand Tour can be a daunting place. Most people are too busy working to pass the time of day, but Laura Meseguer always has a happy smile and a warm word to cheer up the weariest of journo’s. TV commentator, serious journalist that can take a good photograph, add in good looks and a sense of humour…what more could you ask for?

PEZ: You are a writer for the Spanish cycling magazine; Pedalier Pro. Why did you go into cycling journalism?

Laura Meseguer: It was an accident that brought me here. I was working in communications for the company that sponsored the red jersey at the 2007 La Vuelta. I didnґt know anything about cycling and in my previous job in the TV department of the Agencia EFE I didn’t have any contact with cycling before. But when I started in La Vuelta I felt really curious about this sport. I think it was the cycling values, which really attracted me to it. I was impressed with everything around me and in every single story I was listening to day by day. After La Vuelta I decided to focus my future only on cycling.

PEZ: I’m thinking back to my first Vuelta 10 years ago, as far as I can remember there were no women amongst the press. This year there are; you, Ainara Hernando from Ciclismo a Fondo and photographer Sabine Jacobs, why so few women?

Laura: Cycling is a very small world; I think itґs not easy for anybody to start working here, because it seems like there is no space for new arrivals. The logical developing of the sport and society is bringing more women to this sport, which I think it must be something common and not surprising! There are no difficulties for us working here; itґs true that sometimes we have to make a bigger effort to prove that we are serious and responsible with our jobs, as all the rest of the people do. The important thing is the information not the person who gives it; journalists, we are not protagonist and people sometimes forget that. But I have to say that in all these years I have never had any problem with anybody and have never been marginalized because I am a woman.

PEZ: Personally I think the riders are more open to women journalists and they definitely remember them. Have you found any advantages or disadvantages?

Laura: Not at all, but sometimes they are more shy than when they speak to us than to other journalists. 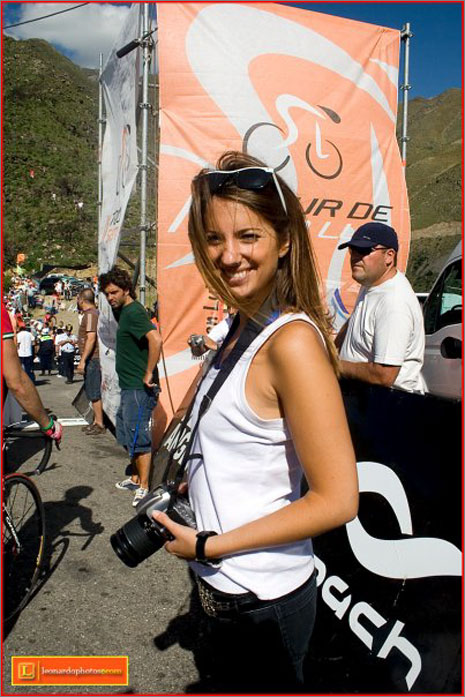 At work in Argentina

PEZ: As the Vuelta stages tend to finish quite late and you have to write and/or edit photos and post articles etc. do you have time for the after stage fiesta’s? Or is it just that I’m getting too old for all that now?

Laura: Ha ha! It was something that I was thinking during this Vuelta a Espaсa too. There were a lot of parties, but I just felt that I could only go to maybe three. I was worried about it, “am I getting old?”, but then I realized that working for Pedalier Pro and also for Festina during La Vuelta was stealing all my time until very late in the night. Not possible to do both things!

PEZ: What did you think of this year’s Vuelta a Espaсa?

Laura: I think it gave the show that people were demanding and brought some calm after a polemic Giro and a hard Tour with a lot of crashes. The route was just amazing with all those tough finishes and the stages in Paнs Vasco after 33 years. A lot of ambitious riders gave emotion to the fight for the general classification and this brought new revelations as Chris Froome and Bauke Mollema and some new names unknown to a Spanish audience.
There are not too many cons this year; I think the same as always. Too many transfers and maybe a very hard race for the rides. By the way, it was a very good show. 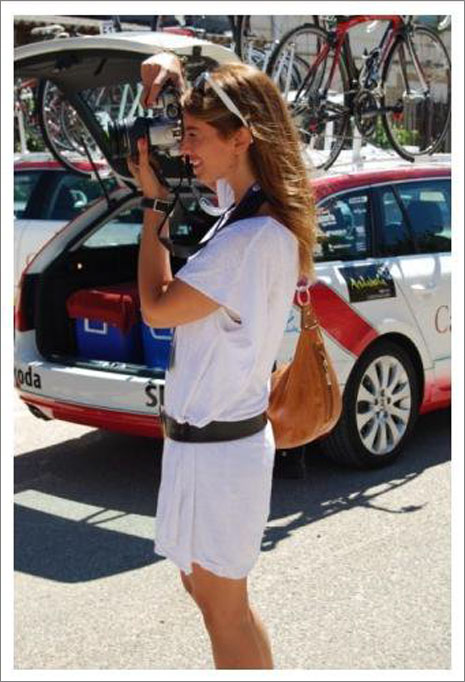 Photos for the Andalucia Team

PEZ: For you which riders have stood out the most in this year’s race?

Laura: Iґve been really impressed about the human and physical quality of Chris Froome. The day after Salamanca, It struck me; he was wearing the red jersey and started working for Bradley Wiggins in La Covatilla. The leader of the race working for the leader of the team. Then in the press room he impressed us with his story, his clear explanations, his strong values and his fidelity to his team and to his leader. 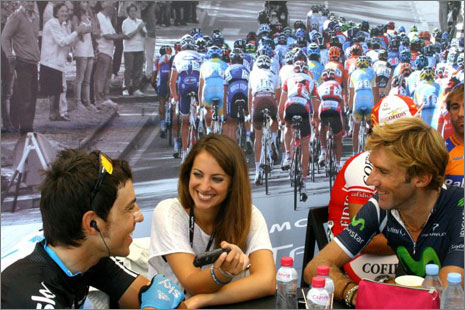 PEZ: What will be your best memory of this or any Vuelta you have worked on?

Laura: I have a lot of good memories in La Vuelta and in some other races, but the most special moment for me since I started in 2007, was during the third stage of this edition of La Vuelta a Espaсa where a good friend of mine, Pablo Lastras won in Totana and dedicated part of his victory to another special friend, Xavi Tondo. Itґs impossible for me to describe with words all the feelings that I had that day. I was in a race car that day and sometimes we managed to go forward to the break to shout “come on Penkas!”. I was not a journalist in that moment, just a friend. And watching Lastras riding so aggressively; fighting for the victory, for his mum, for Xavi and for all the people he loves. In my mind were the long conversations we had, the three of us in San Luis, and all the good moments lived together. I hugged him and said him: “Thank you”. 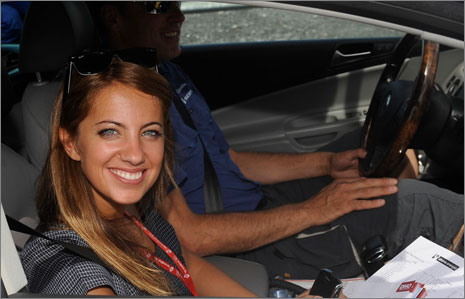 Another day in the car!

PEZ: What does La Vuelta mean to you?

Laura: La Vuelta means the place where everything started for me, but at the same time is a very special race, it mean hard work during more than 21 days. The good thing is that I feel at home surrounded by a big family and a lot of them are friends for the rest of the year. 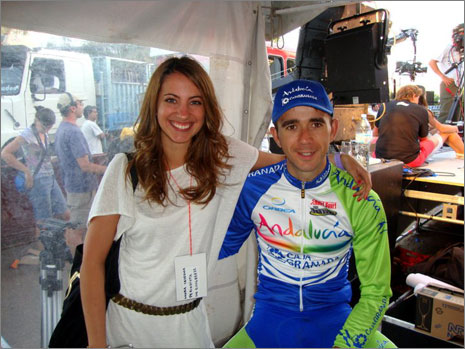 PEZ: You studied in Argentina, Chile and Spain, why do you live in Madrid?

Laura: My father is a retired journalist and when I was a child we moved to Argentina because of his job and then to Chile. We lived there for seven years; it was one of the greatest experiences of my life. We came back to Madrid because it was the place where we lived before leaving. I finished school here and attended my University studies. 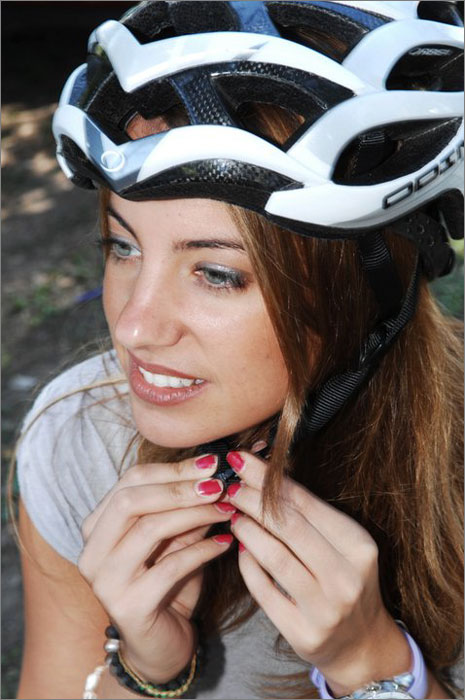 Does it suit me?

PEZ: You are also press manager for Alexander Kolobnev, how did that come about?

Laura: We met in San Luis. He need it someone for the press, website, etc. and there I was! 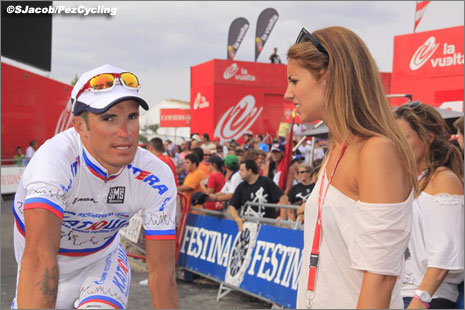 PEZ: In Spain we saw you on TV commentating on the Giro d’Italia, was that scary and is it something you would like to do more of?

Laura: Not at all. I like to participate in new projects, Iґm always very welcome to do different things from the one I do normally; this also provided me with a different point of view of cycling and life. TV doesnґt really attract me and in Spain itґs shameful, the journalism they sell. So I canґt find a place which could suit me. Commentating was a nice experience, especially on two beautiful stages of the Giro dґItalia and also with good friends; the journalist Juanma Бlamo, the ex-pro Carlos Castaсo and the Spanish coach, Josй Luis de Santos. 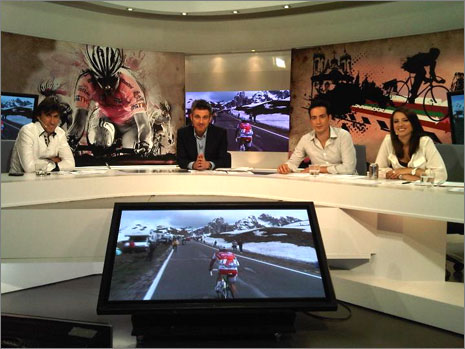 PEZ: Which bike race is your favourite, to report on or just to watch?

Laura: Paris-Roubaix, Tour of Flanders, epic stages of Giro d’Italia, Tour de France and Vuelta a Espaсa and the Worlds. Normally I like the races where the riders have a special ambition, where thereґs a story behind it and you know the story and see the rider get what he was looking for. Thatґs what turns the race into a very special moment.

PEZ: Who is your favourite cyclist in the present peloton?

Laura: Itґs difficult to talk about only one. The good thing in cycling is that there are different specialities and different roles so you can have more than one hero. Sometimes it’s not about the strength and the results, itґs about the personalities, about the story. So the list is a really long list!

PEZ: What about friends who are not cyclists?

Laura: With all the time we spend travelling and working in cycling, I think itґs necessary to have confidence in close friends with whom to talk, laugh and share the difficult moments and they can replace your family when youґre far away from your home. They are always there when you need it. I feel lucky that I know them and that I can presume they are friends. 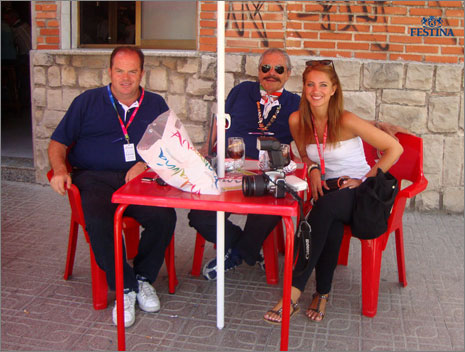 PEZ: Any heroes (cycling or non-cycling)?

Laura: Mandela, Martin Luther King and the first message from Obama about hope and faith. I like people who are able to make people wish and believe in a better society and have a pro-active position about a possible change for a better world. Nowadays it seems a difficult mission. Maybe Iґm too idealist…Also my mother, of course. 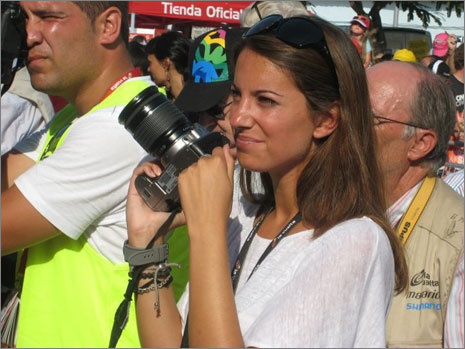 PEZ: When you are not working what is your favourite pastime?

Laura: I love to travel and meet new people, but this is something that I also do with my work in cycling. When Iґm at home I like to meet my friends and hear all their new stories and go out with them and enjoy all the plans you can make in Madrid. Of course my family is a very important part of my rest time.

Laura: Iґve been thinking for a few years of travelling to Perъ and Bolivia. I love South America but I canґt find the time to do it. There are a lot of places which I would like to visit. Never been in Asia, for example. I like the trips which you take 20 days visiting new places, walking, getting to know the country’s customs, going deeply into their culture…the last years I didnґt have enough time for it. This year Iґm going for a week to Gambia with a friend, the frontier with Senegal. Iґve heard good things about this destination. 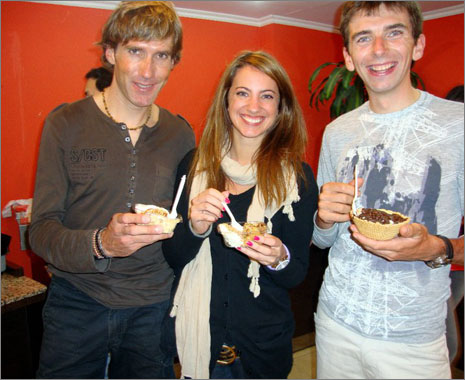 PEZ: What do you hope the future holds for Laura Meseguer?

Laura: I hope a lot of work and still progressing and learning everyday as I do nowadays. 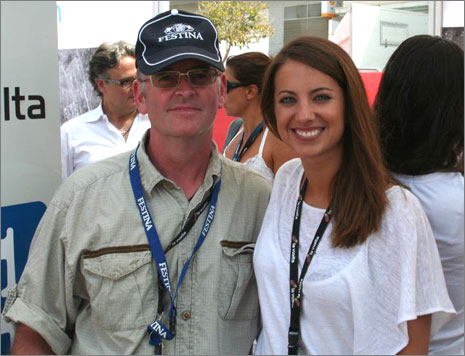 Laura with some fat, old bloke who works for PEZ!

You can catch up with one of the nicest people in the cycling press corps at www.pedalierweb.es and her twitter @Laura_Meseguer. And if your Spanish is good then you can see Laura’s work in Pedalier Pro Magazine and her bolg blog.festina.com
.