‘La Doyenne’, a French term of respect meaning, ‘oldest member’ – it’s how we refer to Liege-Bastogne-Liege, the oldest of the five ‘monuments’ in cycling. First run in 1894 the roll of honour reads like a ‘who’s who’ of cycling – Ferdi Kubler, Rik van Looy, Jacques Anquetil, Bernard Hinault, Moreno Argentin, Michele Bartoli and of course Eddy Merckx.

The fact that Eddy won it five times tells you all you need to know about this race, it’s for talented, tough riders only. There are few ‘surprise’ winners, some of the victors names might not be familiar now, but they were part of the elite of their day when they won at Liege. 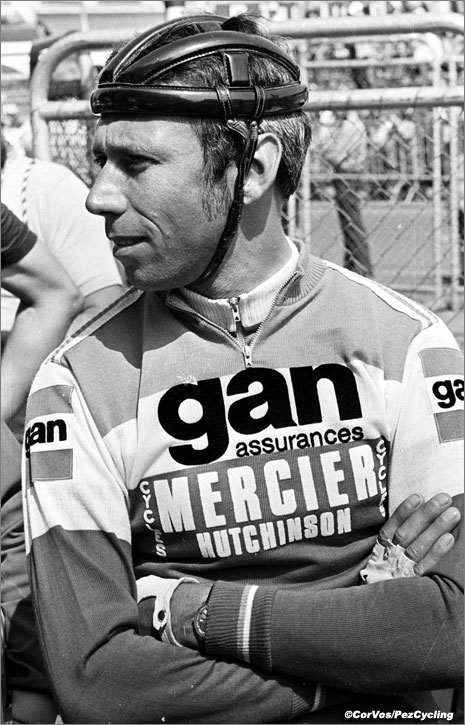 Hoban Does The Deed
It took a long time until an English-speaker made it onto the podium, here’s how Yorkshire’s Barry Hoban recalls that day in April 1969.

‘It was good weather that year, at that time of year it’s hard to predict the weather for Liege – I’ve ridden it in everything from snow to hot sunshine. It’s a race that’s a wearing-down process, the run down to Bastogne isn’t that hard, it’s the return journey that’s the killer. Sure there are breaks but the distance and the climbs eliminate a lot of guys from the back of the race. Most of the climbs come after the ‘turn’, when I say climbs I mean classic climbs, not long Grand Tour-type climbs, you get up them on power. [The record books show that 13 of the 15 categorised climbs in the 1969 edition were between Bastogne and the finish.]

Stacking The Break
‘The break went at around half distance and Merckx put two of his best Faema [his Italian sponsor, they made coffee machines – still to be seen in cool Italian cafes around the world] team-mates in it – Vic Van Schil and Roger Swerts.

Making The Best Of A Bad Situation
I was chasing with Eric Leman [3 times Tour of Flanders winner; Belgium & Mars-Flandria], Felice Gimondi [Worlds, Tour, Giro and Vuelta winner; Italy & Salvarani] and Herman Van Springel [7 times Bordeaux-Paris winner; Belgium & Mann Grundig] but Merckx had team-mates in our group and they disrupted the chase – he wasn’t just the best rider of his day, he had the best team too. Van Schil managed to stay with Merckx and they ended-up eight minutes clear by the finish. 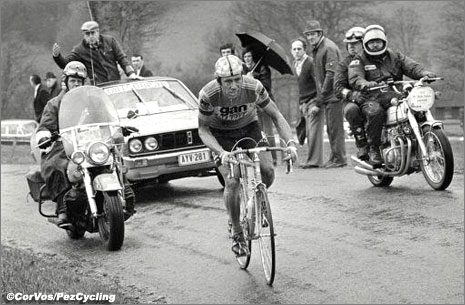 It Pays To Sprint Fast
The finish in those days was on the track at Rocourt and I took the sprint.’ Barry doesn’t say it but Leman was one of the best finishers of the day, however he couldn’t get round the Englishman and had to settle for fourth. When asked for his tip for 2006 but Barry explained; ‘It’s difficult to predict, the rider who is going to win at Liege might not even be showing yet. In our day you rode every race there was from February until October including all the classics. Now it’s about specialisation, you have riders prepared specifically for San Remo, Flanders and Roubaix; but it’s a completely different group of riders for the hilly classics like Amstel, The Fleche and Liege.’

The Photog’s View: Tour of the Battenkill 2011