The Six Day circuit is notoriously hard to break into; the so called ‘Blue Train’ of top riders guards the keys to the carriages jealously and young riders have to prove themselves before they can hop aboard. One rider who has defied this code is 26 year-old German, Leif Lampater; as the dernys roared and the PA blasted Europop into the Copenhagen night, Leif took time to talk to PEZ. 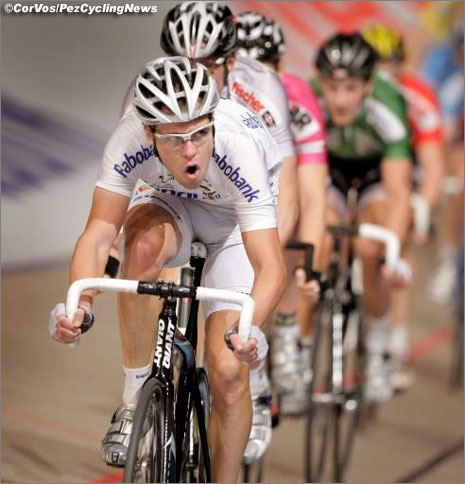 When you talk to the German it doesn’t take long to establish that this is a young man who knows exactly what he wants and where he’s going. Once we’ve covered the basics of age, place of birth (Waiblingen) and that he now lives in Rosenheim with his girlfriend, I asked if he’d had any role models as a young cyclist; ‘No, not really.’

I get the feeling that this is one independent dude and take up the theme of why he’s never joined a pro team, always racing single sponsored; ‘Firstly it’s hard to get a team in Germany now and it’s better for me to ride like this anyway. If I ride 11 or 12 sixes, when the six day season finishes and I need to rest a little, I don’t want management saying to me, “now you must be fit for road racing in April!” 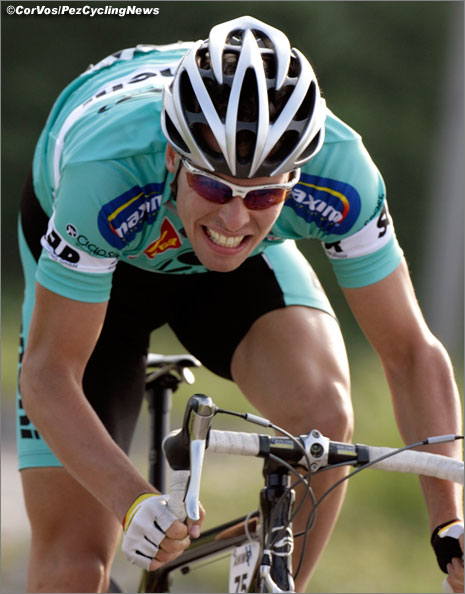 Lampater spends some time on the road, but the aim is always the Six season.

As if to emphasise that he’s his own man, when I ask if he learned a lot from partnership with legend, Erik Zabel, the answer is maybe a little surprising; ‘Erik has retired now of course, but remember that when I started to ride with him he had not ridden that many sixes, maybe 30, so I think we both learned from each other.’ 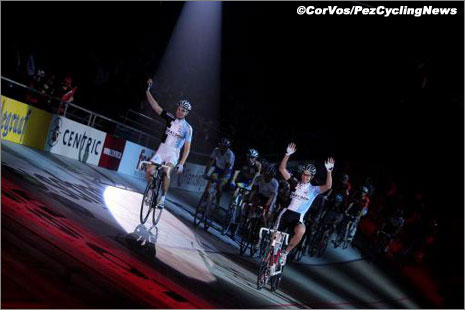 Zabel and Lampater under the lights, er, light.

From some others this might sound arrogant, but not from Lampater, he’s just a young man who is confident of his own abilities. 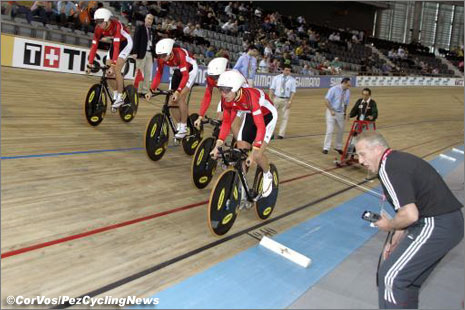 Leif had a solid career in the team pursuit before shifting his focus entirely to the Sixes.

I ask why he chose the Sixes in the first place; ‘My background was in individual and team pursuiting and when I first rode a six, I took to it very well, I think that naturally I have a talent for this form of racing.’ 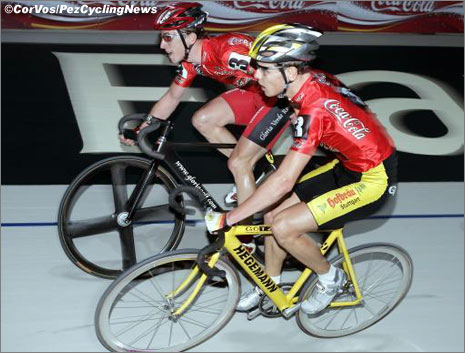 Leif is no stranger to the track – he has been competing at a high level for a long while. This was back in his U23 days.

On the subject of breaking into the ‘circle’ he is equally direct; ‘If you are young, you have to earn respect, you have to be able to ride with the good ones, I was able to do that quite quickly, in fact, I think it was only my fourth or fifth six when I made the podium.’ 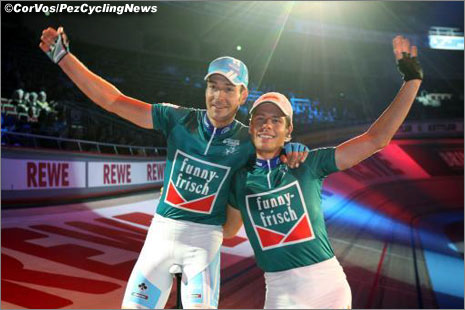 When it comes to stats, the only one he is interested in is wins; ‘I’m not sure how many I have ridden, maybe 30-odd, I have won six (Berlin, Rotterdam, Dortmund, Bremen, and two at Stuttgart) of those, my first was Stuttgart in 2006; that was very nice.’ 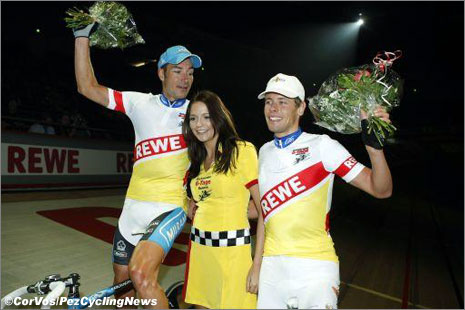 As for his favourite partner; ‘it was good to ride with Erik Zabel, but Marco Villa was a rider who I learned a lot from, he was very good at explaining things to young riders like me. And of course, Robert (Bartko, his partner here in Copenhagen) is very strong.’ 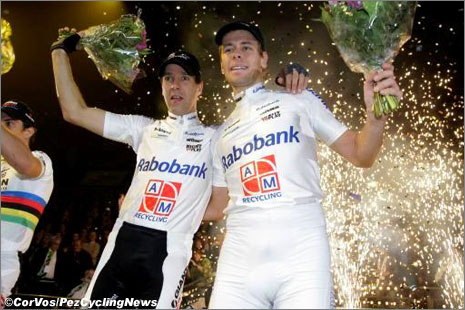 And favourite thing about the sixes; ‘It’s being close to the public and being able to have fun with them, all of the sixes are different; Bremen is good, Stuttgart too, and Munich is a special race, which I would like to win.’ 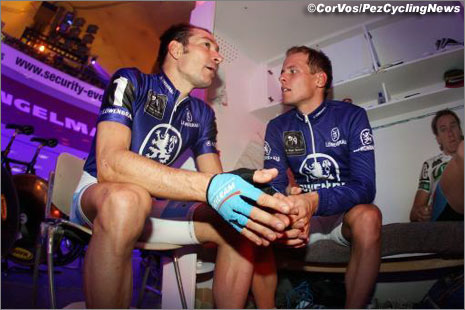 I ask if there is any other six that he would particularly like to win; ‘Bremen is on the list, for sure. The foreign sixes are not so special as the home races because the crowd has to know you and like you. Berlin is my favourite six because the crowd is so good; but all the sixes are special in their own way. 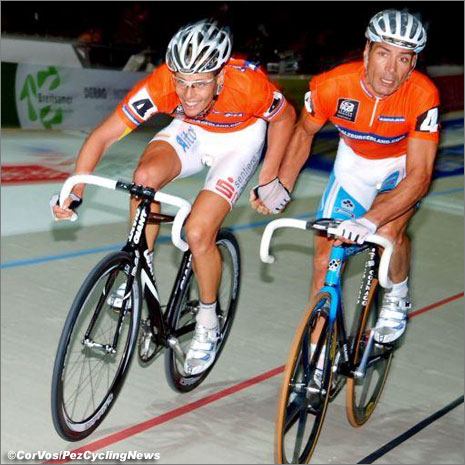 And what about the road; ‘I ride the road from the end of April, mainly as preparation for my six day season.’

Does he rest after the six season?; ‘After the last six, at Hasselt in Belgium, I’ll be going to the Bendigo Madison in Australia with Franco Marvulli, after that I’ll take a little time to relax out there.’ 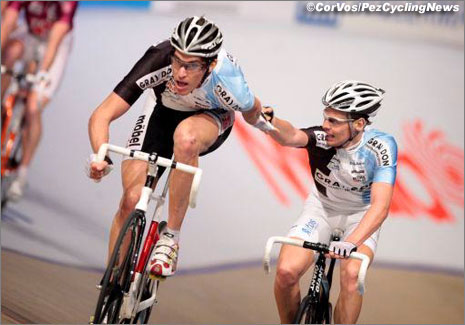 Leif and Marvelous…a pairing for the future?

And if he could change just one thing about the sixes; ‘I like them as they are, but I do think that we should stop racing at midnight, 2:00 am is too late to be still racing. I think that if we race from 7:30 until 12.00 midnight then that’s long enough these days. I also think that the show has to be designed to suit the crowd; if it’s a six where most of the fans are cycling enthusiasts then they have a race based programme. But if it’s a more general public crowd then introduce more of the entertainment and cabaret. The sixes are all about giving people what they want. 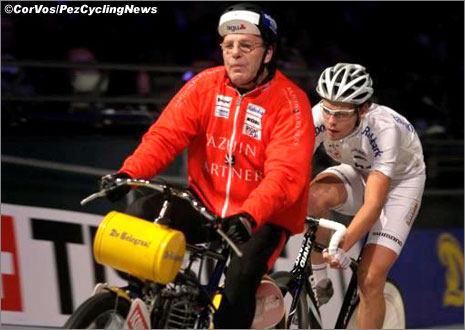 I get the feeling that I’ve distracted Leif long enough from his BlackBerry, a final question; ‘how many more seasons would you like to ride the sixes? ‘Lots!’

It was time for me to become a runner again and for Leif to ride some more laps on the track to the top. 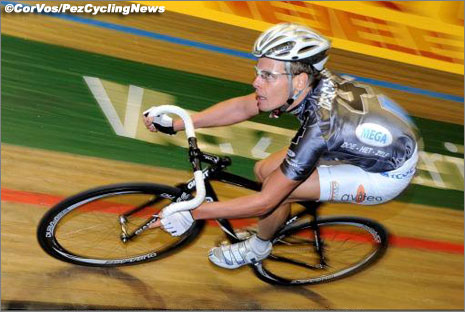