“The hardest day of your cycling life, is the day you pack it in!” The words of Tim Harris, a pro cyclist for 13 years who raced in every country in Europe and was British professional road race champion in 1989. PEZ caught up with him recently at his Leuven, Belgium home, as part of our series of articles about that day when there’s no ‘next race’ to look forward to.

PEZ: Did you always want to be a pro, Tim?
Tim: I was 14, sitting at home in Norfolk, watching TV and this documentary film came-on, ‘Stars and Water Carriers’, about the Giro. I went to school next day and packed in football and from that day on, there was only one thing I wanted to do.

PEZ: Tell us about your amateur days.
Tim: When I was 17, I got on a train in Norfolk and made my way to Milan by way of London. I managed to win a race in Italy, but fell foul of a new rule which meant foreigners couldn’t race at that level. I went to Holland and would have won the amateur Paris-Roubaix, but for the fact that my frame broke, I was fifth, last of the five man break which won the race. I rode the Peace Race and won the season-opening “Perf’s Pedal Race” in the UK on three occasions; although I didn’t ride in Britain that much during my career. 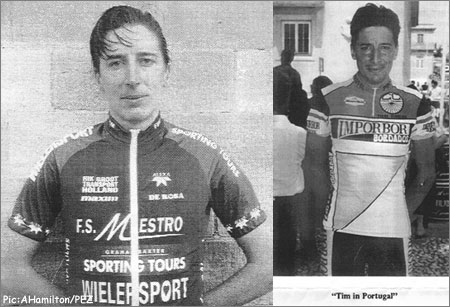 PEZ: You were a pro for 13 years?
Tim: Yes, I turned pro for Elro Snacks in Holland; then I was with Viditel, also in Holland; I spent two years with the British ANC team; after that it was another UK team, Raleigh; Festina in Spain was next; then I had two spells with Portuguese teams, Orima and Imporbor; I ended my career with Maestro in Belgium. 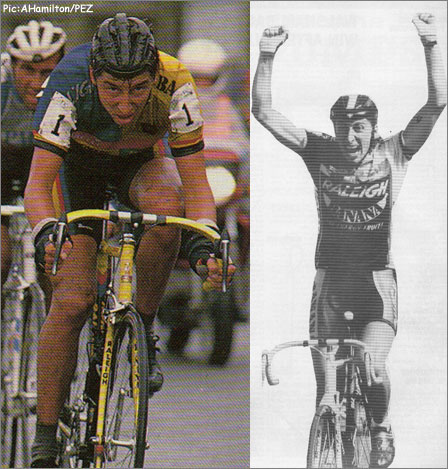 PEZ: Which performances are you most proud of?
Tim: I won the British pro criterium champs in 1987 and the pro road race champs in 1989 – all the best guys were there that day, including Robert Millar and Malcolm Elliott. I think maybe my best ride ever was in the GP E3 Harelbeke in 1989, I was only 13th or 14th but I was right-there at the finale, in with all the biggest riders of the day. 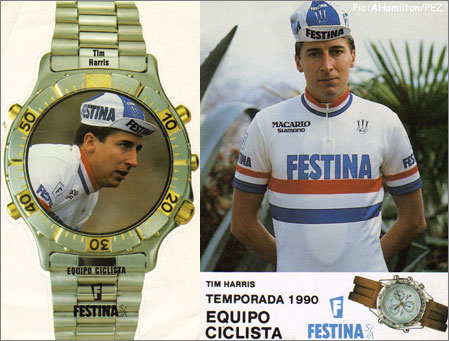 PEZ: What’s the toughest ‘war zone?’
Tim: Portugal, no question; the roads are terrible, the temperature is 45 degrees and the stage distances are crazy, 250 or 260 kilometres all the time. In addition to those factors, the racing is completely uncontrolled, there’s no pattern to it. In a big race in Belgium, it will start reasonably steadily and when the big riders go, you either go with them, or you can’t. In Portugal they just attack from the start, crazy! There are always Italian and Spanish teams riding too, so it’s good quality fields.

Probably the worst thing though, is that Portugal is out on a limb in Europe and you never get recognition for your performances. I was there recently and they still regard Cayn Theakston (British winner of the Tour of Portugal in 1988) like David Beckham, he’s a legend but hardly anyone has heard of him, outside of Portugal. 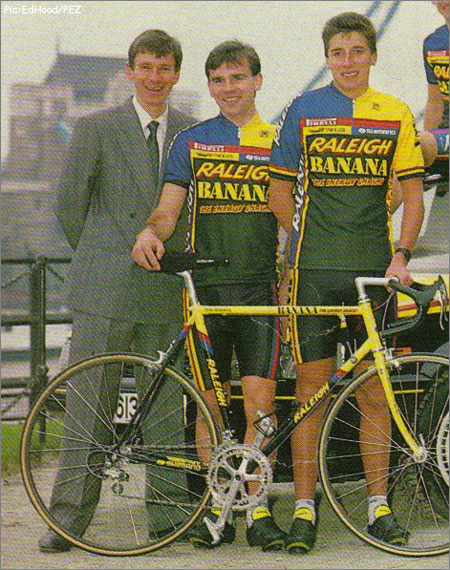 PEZ: Who was the rider who impressed you most?
Tim: Francesco Moser, no question, he had the aura of a film star. I was riding Gent-Wevelgem and he appeareed at the start, his team were in a mini-bus, but he arrived on his own, in the back of the team car, wearing these really cool sunglasses, he just looked amazing. In the race, he was in the fifth echelon with me; one by one he just rode across from one echelon to the next – that’s impossible! At the finish he was still in the top ten after all that riding.

PEZ: Was the end of your career planned?
Tim: Not at all, I was riding the last kermesse of the Belgian season and half-way round, something just ‘clicked’ and that was it, I climbed-off, it was all over. I’d been racing for 20 years, that was enough. The apartment I rented was situated above a company that sold chairs and my landlord owned the business; he asked me if I’d like to sell chairs for him – it sounded pretty boring, but what else was I going to do? The only thing I was good at was languages, because I raced all over Europe I can speak most of the languages, but I had no sales experience. For the first six months, I sold nothing but eventually, after about a year-and-a-half I started to get results. 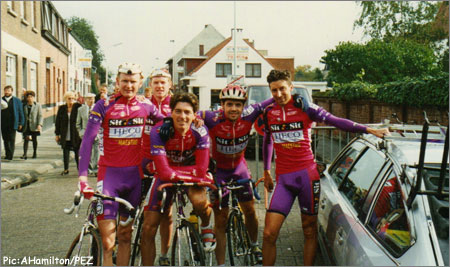 PEZ: You have your own businesses now?
Tim: Yes, I do contract furniture, I get jobs all over Europe. I’m also involved in cycling, I drive VIP’s at the Tour, for example and I’m a race director on the Tour of Britain. I have property too, which we rent out to cyclists who are racing in Belgium; just now we have Canadian cyclo-cross riders staying. 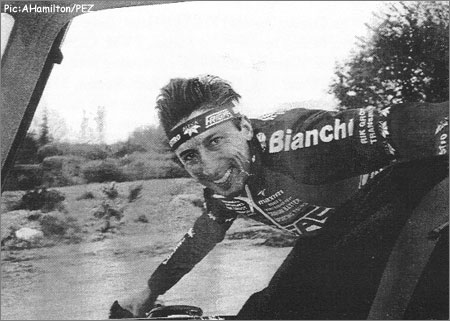 PEZ: Did the contacts you made and lessons you learned as a pro, help in business?
Tim: Definitely, on a team like Raleigh, although you were just a rider, you would meet the top people in the company, their attitude rubbed off on you. Surviving as a pro in Belgium keeps you sharp, if you’re not shrewd and on the ball, you’ll get ‘flicked’ (cheated) all the time. I think another attitude I picked-up as a pro is that Europe is really one place, international borders don’t matter, you can do business anywhere; and having the languages is a big help.

PEZ: Why still the involvement in cycling?
Tim: It’s just in me, I can’t not be around cycling! When I packed-in, I wanted nothing to do with cycling, slowly but surely you get back involved – sucked in! 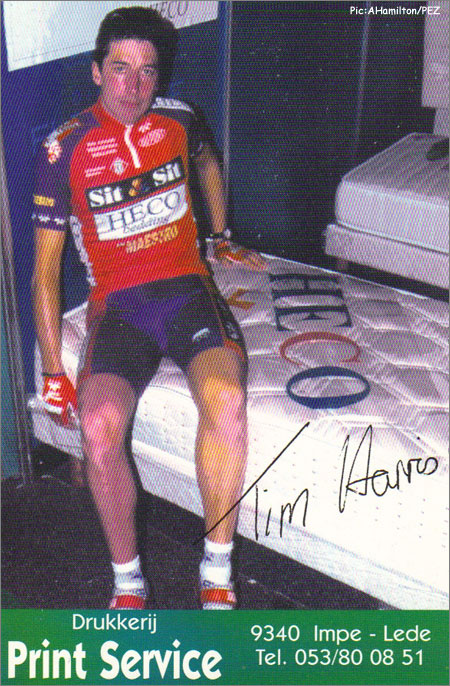 PEZ: What are the biggest changes you’ve seen in the sport?
Tim: The infrastructure; the buses, the staff, the budget. When I was with Festina, that was a big team – 30 riders, but even at the biggest races we only had one mechanic and one masseur, now there’s a huge number of back-up staff. The big riders of the day always get paid a lot of money, so that’s probably not changed that much, relatively speaking. Another thing that has changed is that the riders are a lot less accessible to the public now; hidden-away in buses and behind crowd control tapes, the fans aren’t getting the same experience. That’s one of the reasons that cyclo-cross is so popular, you still get close to the riders.

PEZ: Is Belgium still ‘the’ place, if you’re trying to break-in?
Tim: There are only four places where you go to race properly; Belgium, France, Italy or Spain. But in the last three countries, you have to be in a team; and unless you have contacts, getting into a team can be difficult. In Belgium, you can get off the plane and go straight to a race. It’s easy to race, there are loads of good races and the people there love it; if you start getting results you’ll soon have folk wanting to help you. It’s also the place to be, if you can’t climb! 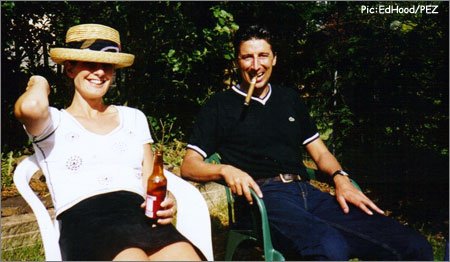 PEZ: What’s your advice for those wanting to ‘make it?’
Tim: It’s all much more scientific now, but the key quality is determination. You’re going to come up against 101 obstacles and you have to have the will to climb over them. I think that as much as 80% of it is down to determination. If you boil it all down, it’s pretty simple to be a good rider – train, rest, eat properly and don’t do anything to excess, do it sensibly and don’t look for shortcuts.

PEZ: Regrets?
Tim: None really, I’ve seen the world and met loads of great folks. I maybe slipped-up in a couple of races, but no – no regrets at all.

Pro Shop – Back to Business