Just days after winning the biggest race of his career, new World Champion Paulo Bettini’s high was shattered by the sudden death of his brother. Overcome with grief, his family and friends convinced him to keep racing, it’s what Sauro would have wanted. He talked with press today in Mendrisio about this difficult time, and his race tomorrow.

The Italians believe that if during the “summer of the dead” the weather will be nice and warm, Saint Martin (the Saint Martin day falls during this time) will be able to store enough firewood for the winter time. This means that the winter will be very cold. 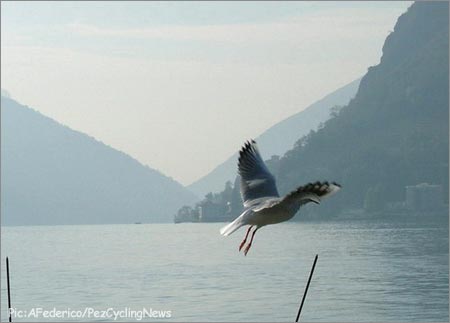 Lago di Como is still today, but tomorrow the shores will roar under the final race of the 2006 ProTour season.

So the winter should be terrible this year. It’s been a warm and beautiful day on Lake Como. Nothing can remember the fall or the winter time. Now the little city on the lake is sleeping and everybody knows that tomorrow they will witness a new day of great cycling. Something that every year renews and it’s able to continue the centenary history of the classic of the dead leaves: the Giro di Lombardia.

We were in Mendrisio today for a breath of the race, to dream deeply tonight about her. At the credential desk inside a nice and comfortable press room, we were arm to arm with many other journalists who were trying, like us, to translate in words all the feelings which this event is able to grow up in each one.

The lake is different from the sea. The lake is quite and silent. But tomorrow its shores, its inlets, its coves will be stunned by the strength of the last important race of the year. Last year Paolo Bettini won the Giro di Lombardia after a great show which took the way on the famous climb to the Madonna del Ghisallo. Once again this climb returns to write the story of the race after many year when it was located in the first part of the route. With the shift of the finish from Bergamo to Como three years ago the Giro di Lombardia has again earned its original face. Nothing against the city of Bergamo but we prefer the actual solution! 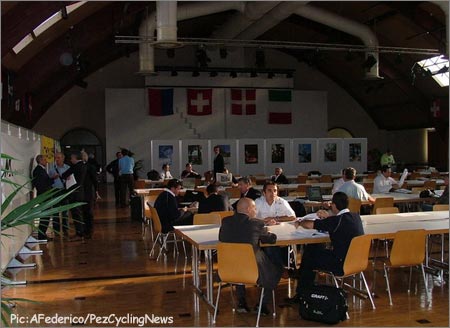 The press room – like the lake, is calm before tomorrow’s storm.

But who doesn’t remember how strongly Bettini beat Simoni and Schleck last year? To most, his win appeared as revenge against the disappointing result at the World’s in Madrid. Now it’s a completely different situation. Bettini recently won the World’s and one week later he lost one of the most important people in his life – his brother Sauro.

We met Bettini this afternoon together with the other journalists during a press conference organized by his team Quick Step inside the Hotel della Stazione in front of the railway station in Mendrisio.

What follows is not an interview; it’s a sort of confession. Inside the small room there was also Bettini’s parents and his wife. Once ready, Bettini start to look to the journalists but nobody was able to ask, to say something really important. Everybody was fully aware that the cycling, for the World Champion, in this moment, is something marginal. 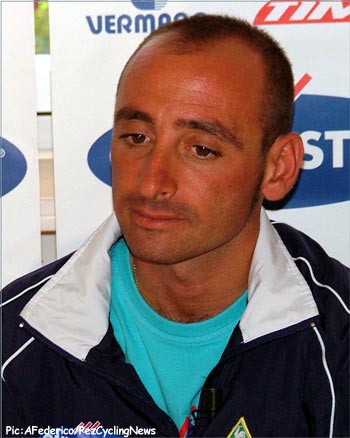 Word Champion Bettini reflects on the loss of his brother.

“I won all what a rider can dream. After the World’s I was aware that my career was complete; I don’t need more victories, or a jerseys, or a cups. For some days I really was convinced that I had to leave racing, but my parents and my wife insisted, and finally I took part in the Giro dell’Emilia.”

“But that day I felt very strange. I was not inside the race, with my head.. I mean.”

“I met the affection first of all of my closed group: Bramati and Paolini. These two guys are an original reference for me. That I felt the love of the people, of the entire bunch and of the journalists too. I appreciate how did you treat the argument. I appreciate your respect.”

“In this moment I cannot sit and speak about the race as a normal one. I don’t know how I will react when it will be necessary. You know, in any race comes a moment of difficulty and not always the legs make the difference.” 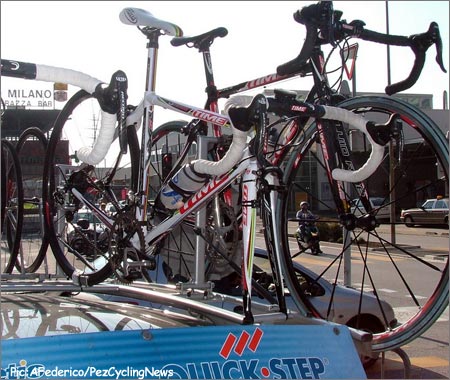 Bettini’s bikes are ready, and Bettini will line up tomorrow to defend his Lombardia title.

“Every time I look at this jersey” [someone sets a rainbow jersey near him] “I remember how important it was for Sauro; that’s why I cannot just ride with it. I want win with it; but don’t ask to me about tomorrow.”

“I come from a humble family. Now I’m rich and famous; now you can meet me while I drive a Ferrari. But I didn’t forget where I come from. That’s why you can meet me also with my city-bike around my town looking for a pizza.”

“Many riders will take part in this race to win it, to save a season. As usual the names will be always the same; that’s why it’s 4 years that I don’t read a starting list. The race will be hard starting from the Ghisallo, which is a hard climb. But the Civiglio, with it’s descent to Brunate, will make the difference. That particular part of the race will flow without a thought. Once there you’ll have to look forward just to the finish line.”

From the top of the Civiglio the lake looks sweet at this season. Some red leaves adorn the picture which has inspired novelists and dreamers. No one thought. No one thought.

Better follow the race and hide the real life behind its confusion. That’s what Paolo will try to do? No one thought.

San Martino is storing a lot of firewood for the next winter. It will be a long winter for sure.