With so many (too many?) others looking back to best-of-2009 or decade highlights, why not look ahead? A new decade beckons, after all, so who better to make some predictions than the good gentlemen of Cyclevox, Anthony McCrossan and Brian Smith. PEZ sent a couple of teasing questions to get the thought processes flowing. Want to know where you should stick a Euro or two this season?

I’m not sure whether Cyclevox chiefs Anthony McCrossan and Brian Smith dusted off the crystal ball, swirled the tea leaves around in the bottom of the mug or had a ‘juju moment’ with the chicken entrails … but we’ll come back in 12 months and see how accurate they were!

Anthony and Brian have logged many hours together in the commentary box, calling the sport’s biggest races. And they both know the industry inside-out. Anthony has commentated on, or hosted, a lot of top cycling and corporate live events.

Brian rode as a pro at the top level alongside a young Texan called Lance Armstrong, finished the Giro, was British national champion twice and set up the Braveheart Fund among a list of accomplishments, so he’s very qualified to offer his opinion!

So, dim the lights, here come the questions …

PEZ: Team Sky has just launched amid much glitz, glamour and Ј signs. What are their 2010 prospects – will they cut the mustard or will the ‘inner chimp’ run the show?
Brian – Being British I would love them to cut the mustard but I think they will need time. It’s not all about money … just look at Katusha and Cervelo. They have a steep hill to climb and I know they have got some great guys like Scott (Sunderland) and Yatesy (Sean Yates) to lead them to success. 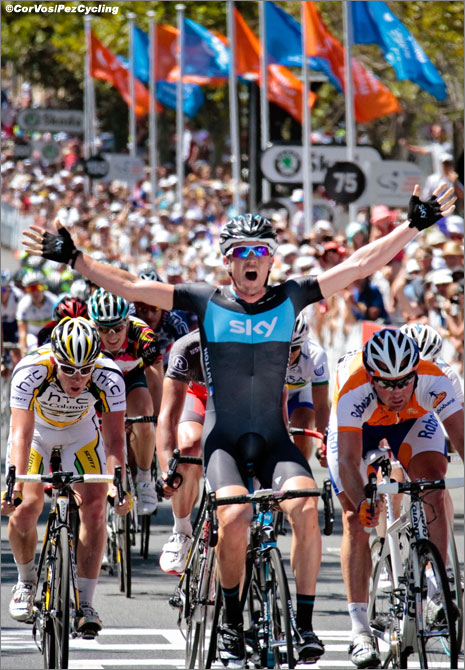 Sky leapt out of the gates Down Under with two solid sprint victories and a spot on the final podium.

Anthony – 2010 will be a year of gelling the team, getting the logistics right and I am sure results will come their way. There are some teams that will not make their lives easy so results when they do come will be well deserved.

You can’t compare this team to Cervelo appearing in 2009, that was a team of guys who gelled very quickly with a lower budget. This team is big budget, big PR, huge expectation from the British public (who are quick to criticise) so early season nerves need to go before we see the best of the team.

PEZ: We’re less than six months away from another Tour de France – will Alberto Contador survive the Saxo Bank/ Radioshack onslaught?
Brian – I think the Tour could be a lot closer than last year. Contador could lose time at the start with the stages across Holland and Belgium. He cannot rely on the knowledge from Bruyneel. He held back on some of the climbs last year so we know he can do some damage in the mountains. The first week is going to be crucial for Contador and that’s where The Shack and Saxo can do some damage. I still think Contador will win again barring crashes or illness. 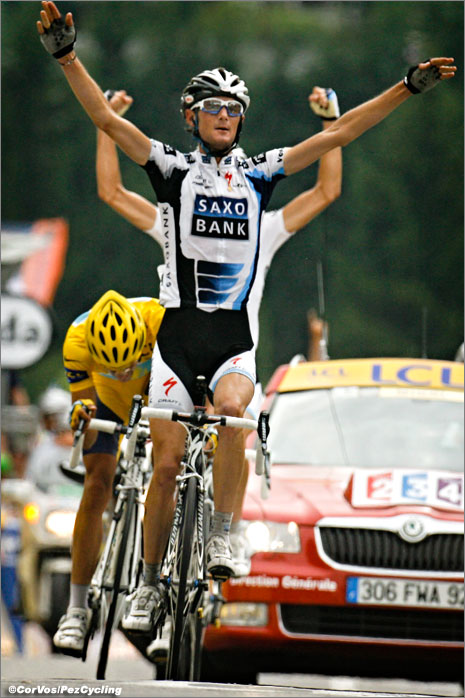 The Schlecks will continue to be a thorn in Contador’s side as he seeks his third Tour de France title.

Anthony – I agree with Brian, the Tour will be a closer fought affair and the first week could cause Contador a few problems. There is no doubt that if he makes the mountains with a small deficit then he will win, but if he is distanced on the tough flat roads then the race is wide open.

PEZ: Assuming it does go ‘horribly wrong’ for Contador, what will have broken him?
Brian – The combined efforts from other teams and not having the guidance from Bruyneel.

Anthony – His ability to ride in the harsh conditions of the north and the strength of his team.

PEZ: Everyone’s favorite Twitter maestro is back for another year, but just what will Lance win in 2010?
Brian – Lance loves the Amstel Gold Race (I rode with him in ’94 edition) and is very capable of winning this classic if he rides. 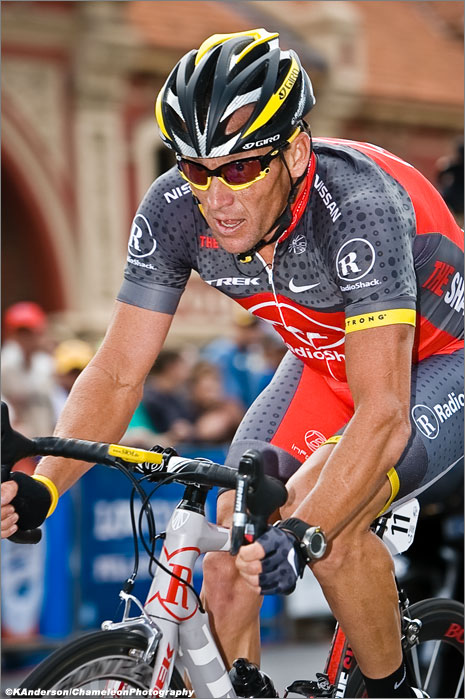 PEZ: Before the Tour though, we’ve got the Giro d’Italia. Can Ivan Basso redeem himself in everyone’s eyes or will Liquigas have too many leaders?
Brian – I think you have seen the best of Basso. I think Pellizotti holds the key to Liquigas success.

Anthony – I agree with Brian on this. Basso is unlikely to make a return to where he was. Kreuziger and Nibali are the riders for me in this team. The Giro needs to be clean and exciting this year, with some fans’ eyes on the Tour of California. 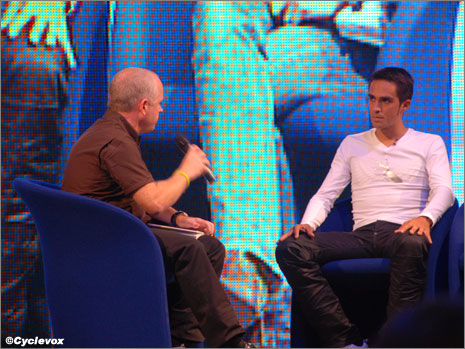 PEZ: Everyone’s (allegedly) least favorite, repentance-avoiding Italian will be back in time for Milan-San Remo. Will Ricardo Ricco be deafened by the peloton hissing at him, and should he have stayed banned for crimes against cycling, fashion, humility …?

Brian – I really don’t think anyone should be allowed back into sport for committing doping offences. Cycling needs to start playing hard ball to stop any cheats. None of this is good for our sport.

Anthony – To me, Ricco isn’t really giving a humble view of himself after being caught and when he comes face to face with certain riders he is going to be given a hard time. The ban should have been longer.

PEZ: Will we see Mark Cavendish in the rainbow jersey after this year’s Worlds in Australia?
Brian – It’s very possible. With more British riders now riding at a higher level then I think it is very possible. Something will need to give though … he can’t be winning Milan-San Remo, stages in Giro and Tour and peaking again for the Worlds at the end of September. 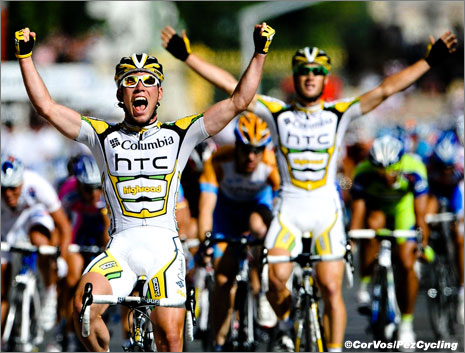 We can expect a lot more from Mark Cavendish in 2010, but Anthony and Brian think Worlds might be a wee bit too much.

Anthony – You can’t discount Cav from winning anything he puts his mind to. Brian is analysing this perfectly though. The team needs to give him some time to rest in order to achieve this. He is still young and, last season, he was pretty tired by the time of the Worlds. Rainbow bands … maybe not this time. Podium place … very likely.

PEZ: How will HTC-Columbia keep both Cav and Greipel happy for another whole year, given that they are (at least) two of the three fastest sprinters in the world?
Brian – Most teams do a double program so I don’t see any problems. There are enough races out there for them both. 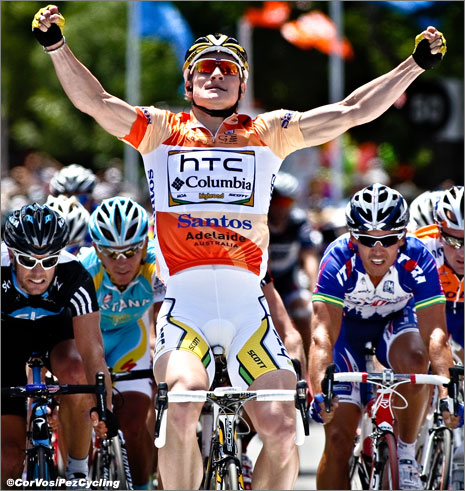 Andre Greipel has started his 2010 campaign in fine fashion – three stage wins and the overall Down Under.

Anthony – Greipel is usually given his time at the Tour Down Under. So as long as he bags some wins there, then all should be OK for him and Cav come the summer. Cav is the main man at Columbia and given the number of wins, he should be. He seems to treat his teammates well and Greipel and he get on. Can’t see him (Griepel) leaving.

PEZ: If the Vuelta’s night-time prologue TT is a hit, should other cycling events try it out?
Brian – Definitely. Cycling is a business and in business you need to look for ways to keep your customer base happy. Variety is the spice of life and trying out new things is good for any sport. Just look at 20-20 cricket. I think there is a place for new types of events which will keep the customers happy.

(Pez: For baffled North American readers, 20-20 is a new rapid-fire, broadcast schedule-friendly version of the five-day sporting incarnation of British imperialism. Wonder why it never caught on in the USA?!)

Anthony – Evening time trials and prologues have happened before with mixed success. If it puts more fans in front of the TV screen then it is a great idea but it needs to be timed right to coincide with time zones of different countries. There is nothing worse than no fans at the roadside either so if it brings the ‘after work crowd’ out, then great. 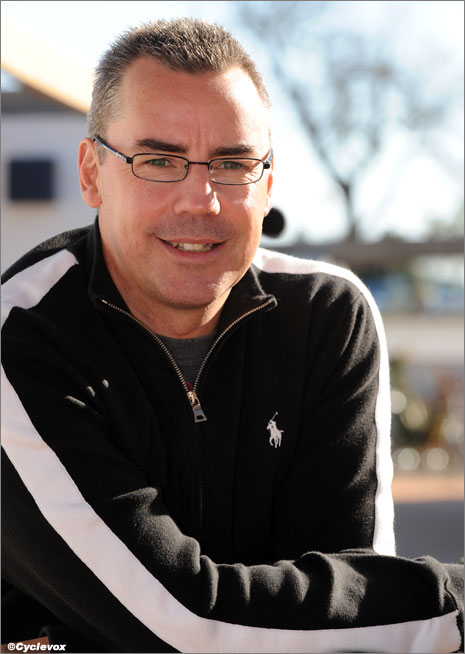 Anthony – There are three Grand Tours so either it replaces one, or becomes the best, most highly ranked and best supported Tour outside of those. See you in 20 years for your answer, Brian!

PEZ: Time for a few tips on where our readers might want to lay a few Euros, Dollars or their local currency of choice! On the 2010 Tour de France podium, we will see …?
Brian – Contador – Andy Schleck – Sastre. 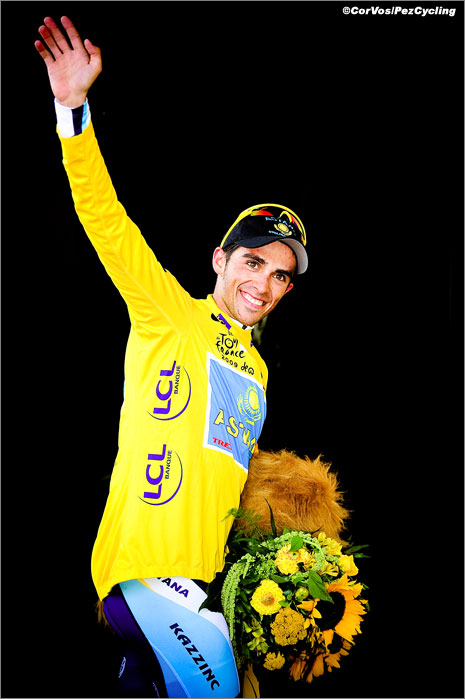 Both Brian and Anthony see the possibility of a tough Tour for Contador, but in the end, can’t see anyone beating him.

Anthony set up Cyclevox in early 2008 to provide the cycling industry with one-stop access to commentary, media, sponsorship and consultancy. Brian joined him full time in late 2008 with Matt Ward strengthening the team in 2009. The company has worked with clients including Rapha, British Cycling, Cervelo Test Team and the London-Paris ride.

You can find out everything you need to know about Cyclevox at: www.Cyclevox.com

See pearls of 140-character wisdom from the guys at: Twitter.com/cyclevox

For information on Anthony go to: www.AnthonyMcCrossan.com and for Brian go to www.BrianSmithCycling.com

Ale Looks Back: 10 Pictures For 10 Years