On Tuesday we got into it with Canadian road pro Lyne Bessette. She’s one of her hometown’s favorite daughters, has no bad feelings about being crashed out of the World’s, and loves training with the men. In Part II we talk about her life married to Tim Johnson, the 2008 Olympics, and what else the future holds…

HOME AGAIN
Randall: After Saturn ended in 2003 Tim signed with Saunier Duval based in Spain. Originally you intended to spend time there and then you signed with Quark based in North America. What was it like being newlyweds on two different continents?

Lyne: It was very hard for us this year. We got married on the 2nd of July. We saw each other a couple or a few times. We planned some stuff but then he got called for a race and couldn’t make it. It wasn’t the best situation. Now that I look back I think I would have tried to go for a European team if he would have stayed in Europe. I don’t think I would have been able to do it again. I’m glad he’s coming back that’s for sure. He’s happier and I’m happier. 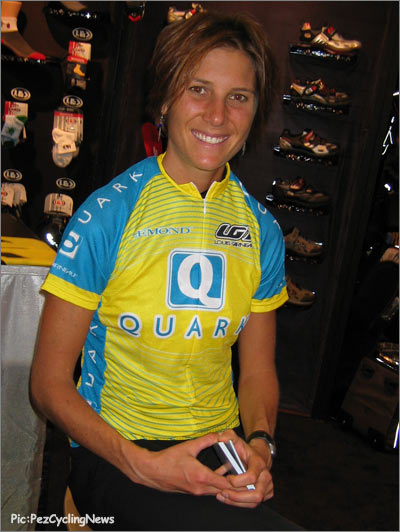 Lyne was ‘live and in color’ at Interbike, signing autographs at the Louis Garneau clothing booth.

Randall: Recently Tim signed with ‘Jittery Joe’s-Kalahari’, an American domestic team. How much of that was a career choice for Tim and how much was it motivated by your desire to be able to spend more time together racing in North America?

Lyne: We definitely look at our career first. But the way we are in life in general we want to be happy. If we aren’t happy because we are far apart then we’re definitely are going to try and work it out to make it closer. But that wasn’t the first reason why he came back. 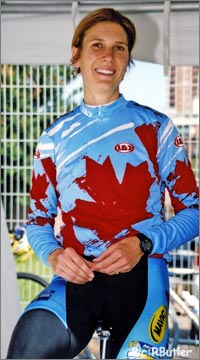 WHEN YOU’RE SMILING
Randall: How have your sporting priorities changed since you got married?

Lyne: I think they have always been the same, even when I got married. For me the important thing is to always have a smile. My coach (ed: Eric Van den Eynde) always said if you have a smile you’re fine. Training, if you’re smiling you’re going to fly. That’s the philosophy I like about him, and he’s not a pushy coach.

And that’s the way I want to be in life too. If I’m happy everything goes and that’s what I’m actually looking for. Even if I have goals that are World Championships or Olympics that doesn’t change the fact that I love my family – they’re always there for me.
I love what I do, but I’m not willing to sacrifice my family and my husband for sports. Right now everything is working very well.

NEXT STOP BEJING
Randall: You have already won a number of the top races in North America and in Europe. What motivates you to keep going? Do you still have some races you want to win, more things you want to accomplish?

Lyne : You’re probably the second person who has asked that and the other one is Tim. I told him this week when I was hiking – I said Tim, I think I want to keep going until Peking. I hadn’t said that yet because I wasn’t sure. But the more I think about it the more I realize how much I like what I do.

I think I still have some things I want to achieve in the sport. Not necessarily in road cycling – yeah I would like to try again for a World medal or an Olympic medal, but also in cyclo-cross. Definitely cyclo-cross – I touched it in 2001 and I want to do it again. 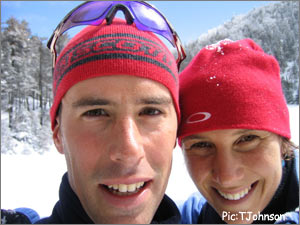 MOTHERS LET YOUR CHILDREN GROW UP TO BE ROADIES
Randall: You and Tim are both successful bike racers. If you have children do you want them to grow up to be bike racers?

Lyne: I think so – I mean I wouldn’t push them towards it. My parents never pushed me into anything and I don’t think Tim’s parents pushed him into anything either. If they like it, sure, because I know what cycling brought to me. I traveled all over the world and I met so many great people and I think that’s so great.

BON APPETIT
Randall: I love French food even though it can be a bit decadent. My favorite decadent French meal is pave de boeuf avec roquefort. I have it when I get back to Paris after the tour ends.

Lyne: No. I mean I like poutine but it needs to be made with homemade French fries – crisp, not the regular French fries, and with great cheese. I want to make one for Tim but we haven’t got there yet.

Randall: Since you enjoy cooking so much, if I am ever in Knowlton will you and Tim have me over for dinner?

Have a read of Part I of our interview with Lyne here.

Check out some of Lyne’s favorite websites:
https://www.geocities.com/lynebessette/
https://www.bioetik.ca/
https://www.quarkgear.com/
https://www.thebeanteam.com/home.html
Like PEZ? Why not subscribe to our weekly newsletter to receive updates and reminders on what's cool in road cycling?

Who Protects the Pro’s?