Magnus Maximus: From Denmark To Dope

By PEZ Crew On Aug 18, 2006
Share
Like PEZ? Why not subscribe to our weekly newsletter to receive updates and reminders on what's cool in road cycling?

Almost everyone it seems has had something to say on the recent doping mess, but one group conspicuously under-represented in the chatter is the riders themselves. Our voice from the peloton, Maggy Backstedt is back from the wars in Denmark, and steps up to voice his thoughts on the war on doping.

This is a race that I love doing, generally it’s a bit like racing in Holland and Belgium. Wet, windy and fairly flat! Just my kind of race. The crowds up in Denmark are not far off what we see in the Tour de France. I don’t know what it is with Denmark and bike racing, but everyone is mad about it.

Back To Racing
I went up there feeling pretty confident that my form was still improving and found out that it was. The first 2 days I was jumping around trying to make a break. For some reason the peloton didn’t really want to let me go, but I had fun trying. After the 2nd stage where I lost a bit of time on the hill on the final circuit I thought it was time for me to try out my sprint and decided to sit back through the stage and save it for the finish. My team mates took good care of me coming into the last km, but then I was on my own. I ended up getting swamped in the last corner and almost came down. When I got out I was pretty far back, around 25th place. So I had to open up my sprint really early to get around everyone. I managed to get up to 5th and after having done a 450m sprint, I was pretty happy with that. 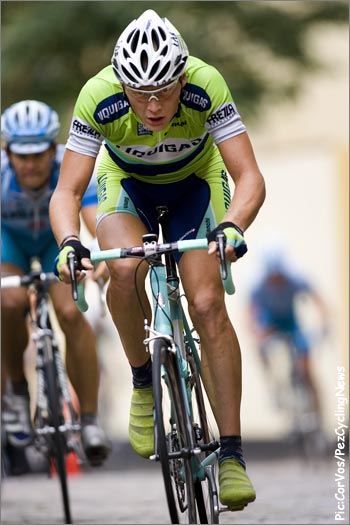 Maggy tests his form at the 2006 Tour of Denmark.

Second last day was a double stage. 100km in the morning where we came in for a sprint again and unfortunately I made the wrong choice for my lead out train and hit the last corner with 200m to go way too far back. I wasn’t a happy camper after that one.

In the evening there was a 14 km TT. This was gonna be a good test to my form. I didn’t feel great on the bike, but for some strange reason I was still going pretty fast. I was no where near Cancellara who won, but then again I wasn’t expecting to as he was in a league of his own. I ended up 6th and very content with that result.

Last stage I was well up for a stage win. I was feeling great and my confidence had grown over the previous days so I felt I could pull one off. I didn’t quite make it, but a 3rd place wasn’t too bad. This has given me quite a good sign as to where my shape is and I am looking forward to the Vuelta now.

OK! The Doping Thing!
OK as a PRO rider of this level I think it’s time to make some comment with regards to the recent controversies that have broken before and sadly after the tour.

When the news of Floyd’s positive result broke and after the publishing of the Operation Puerto I was called upon again and again by journalists outside of cycling to make comment.

“Is it as widespread as we think?”

My answer to these sort of questions is that I have made my choice to race in the same way I live my life. I make my choices and am proud to be a clean athlete. I have two beautiful daughters and would never do anything to jeopardize them or their future, there is a lot of life to live after cycling!

“Have you ever been offered drugs?”

With regards to that question I will say this to you.

Do you think anyone you work with takes drugs? Smokes Dope? Pops some pills in a club?

If the answer is yes, do they freely walk around your workplace offering their drug of choice around the office? Of course they don’t because they would be out on their ass quicker than they could say, drugs me? Never!

Well it’s the same for us as pro riders. Our office just happens to be a big bunch of bike riders and people certainly don’t ride around offering the latest performance enhancing drug! Yes drugs do exist, just like they do in all walks of life, sport just mirrors society. There are cheaters and underhand scheming people in the world otherwise we’d all live in harmony and there would be no fraud! no war! no murders!

Floyd Landis is a good guy. If he has made a mistake then he made his choice and that is something he will have to deal with. Unfortunately if he has, then cycling will have to pay for it and that I don’t like. The way it looks right now the damage has been done and cycling will struggle for a couple of years but I think the sport will survive.

Keep faith in cycling because there are good guys out there.

I have to report everyday where I am going to be and when in case they want to test me. Cycling does more to confront and deal with the use of drugs than any other sport. We don’t sweep it under the carpet and pretend it doesn’t exist.

One comment I will make is that of Tom Boonen after the Tour stage to Pla de Beret in which Tom said that they would never get rid of drugs in sport with stages like that in races. 205km, 5 big mountains! People said he was moaning because he wasn’t winning!

The next day on Eurosport their American pundit Kristy Andersen made a comment that the sprinters should be fresh after having a day off riding through the picturesque mountains the day before…..yeh right! Nice one Kristy! How many Tours have you ridden?

The Tour organizers commented that they would NEVER shorten the race or the stages! When 60% + of the field are over 40 minutes down and outside of the time limit on a mountain stage? What do you think?

I think there is something wrong and I believe there is an issue that needs looking into. There should be a shadow of a chance to make it inside the time limit even for the sprinters. If there are a couple of riders outside the limit then fair enough, but when more than half of the race is outside then I don’t think that it is the riders’ fault. We might not need 90km of climbing in one day, the results will be pretty much the same anyway and the racing will be much better.

I hear that there are a lot of people are wondering why many riders don’t speak up about the doping issue!

I think I know why, and it is all based on the media. You can say something to a journalist and the next day he has twisted it around and published it in a way that pleases him to sell more copies of his newspaper or magazine. This is never fun even when it concerns less delicate issues than doping. So as you can probably understand there is a fear of being quoted saying something that you haven’t said! So if there was some more respect being shown from journalists in this matter I think the riders might feel a bit more confident in talking. In saying this I want to add that this doesn’t go for all journalists, but you can never be sure who is the good one and who is the bad one. A bit like the doping I guess!

See you at the Vuelta 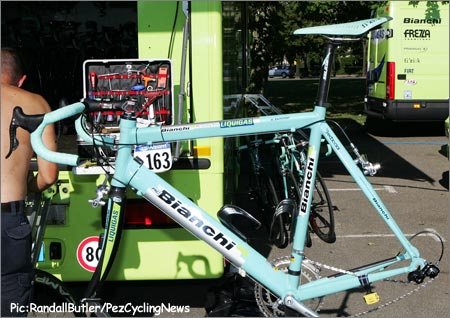 Maggy traded in his trusty Ti Bianchi for an aluminum ride at Le Tour.

ASK MAGGY
Dear Magnus – Normally you ride a titanium Bianchi, but it looked in the Tour, with the massive down tube, that you may have switched to aluminum. Comments?
– Tom Zanarini

Dear Tom
I have been riding a titanium bike for the last couple of years and I still do for some races especially the classics, but also for some other races. However, I wanted to try and build an Alu bike that was stiff enough for me and that is what you picked up on in the Tour. The bike I rode still needs some tweaking, mainly weight issues to be solved, but it is definitely stiff enough, almost too stiff (if that is possible).

Goodies of the last few weeks.
• My Blackberry. couldn’t live without it (sad I know) but it makes my life so much easier.

ASK THE BIG MAN!
Gotta question for Maggy? Send us your thoughts and ideas, and we’ll choose one (or ,opre if we feel like it) for Magnus to answer with each diary. Send your questions to: [email protected]

PEZ-Race: Not Another Drug Story