After a Spring season wrecked by an injured knee, Magnus Backstedt is on the mend and back to racing in Luxemburg and Slovenia. And there’s nothing better than that feeling of finding your form again, unless it’s a call from the team to ride ‘Le Tour’…

On Time: A Day Early
Going out to Tour of Luxembourg I was well, happy to get out there and start racing again, but at the same time I was a bit nervous. I didn’t know how well I was going compared with everyone else out there. Ok I did a small race back home, and I won it, but that isn’t exactly the same as going out there with the big boys hammering over hills in Luxembourg. I think I might have been a bit keen on getting out there to find out though, because I got the flight time wrong with a day.

I was at the airport a day early! (My agent Martin was very happy about this!) 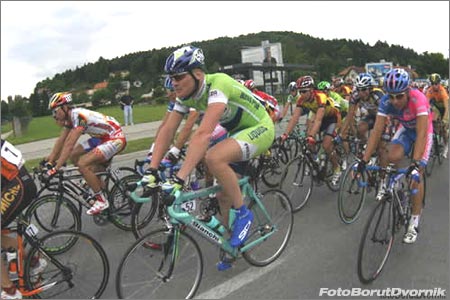 Maggy finding his form on stage 3 of the Tour of Slovenia.

Once I got out there I found out that the route for this year’s race was a lot harder than it has been in previous years. This wasn’t exactly good news, but I had to get out there. After riding steadily through the prologue we got straight in to the thick of the action. We ended up having a really hard day in all ways. It was hilly and I must confess that I am carrying a little bit too much weight at the moment, (this has been improved since Luxembourg.) but it was also 7C degrees and raining, not exactly the perfect way to start my comeback.

After the first stage I could feel my knee was a bit tender, but it went away with a bit of stretching and some other treatment. For the next 2 days I was swinging on the back between the last rider and the service cars. Not a fun place to be in!!!

50 km into the second last stage I had to pack, I was already dropped 3 times and ended up in a group where all the riders decided they’d had enough. So did I!

On To Slovenia!
After having pulled out of the race I got the news that I had to go to Italy for a couple of days before Tour of Slovenia. The obvious way of travelling to Italy would be by airplane. Not this time!!! I got put in a car and off we went. 12 hours and 1200km later we came to Italy, yes the life of a pro is very glamorous! I must say that I wasn’t a very happy camper as I turned up at the hotel, a whole day was wasted on driving.

Anyway, the weather was a lot better down there and I had 2 easy rides to get my legs turning over and to recover before I went off to Slovenia.

Already the first day in Slovenia I was feeling much better, well at least on the flat. On the hills I was still riding around with the brakes on, I just couldn’t get the power down to my pedals.

Through the whole race I was feeling better and better although the course didn’t suit me very well with 2 mountain top finishes, I still feel like I was getting much stronger every day and I will have to say that I was recovering better than any of the boys on my team. I just kept getting stronger and stronger, so when the team asked me if I thought I would be able to get in good enough shape to start the Tour I said. Yeah I will!!!!

Now that I’m back home for this week I will continue to work hard on getting some more miles and some hard work for the hills and the sprints done. I’m then off to Holland for the Pro Tour Team Time Trial on Sunday.

Then it’s “ROAD TRIP!!!!!” with my manager and a Swedish friend and promising rider Freddy Johansson who is staying with me. We head straight up to Sweden for the nationals.

I’m quite looking forward to going up there, Sweden always gives me a
certain calm before big races. I am hoping that I can do something in the road race as well, it would be nice to ride the Tour with the national champ jersey on my back.

I’ll make sure I hook up with you guys before I head out to the Tour to give you a last update on how the form is, going in to my first 3 weeker of the year.

• Music of the week: Reef – Place your hands
• Must have of the month: Powercranks – www.powercranks.com
• Read the PEZ PowerCranks Review Here

ASK THE BIG MAN!
Gotta question for Maggy? Send us your thoughts and ideas, and we’ll choose one for Magnus to answer with each diary.
Send your questions to: [email protected]