MAGNUS Maximus: On The Rest Day

It was rest day in the Vuelta and time for Pez to catch-up with our man Magnus. ‘Rest day’ – have a few beers, do a bit of shopping, take in a movie? Maybe best ask Magnus.

Pez: Talk us through a rest day Magnus.

Magnus: You maybe sleep a little later than usual, say 08.30 but not much later because the hunger wakens you up – starving! In a race like the Vuelta you are burning up so many calories that your body is constantly crying out for energy.

First-off is breakfast then back to the room and chill for an hour or so then it’s time to go out on the bike. Every one is different, but I find that an hour is about right for me although some guys need more than that. After that it’s rest again until dinner, you have to chill and recover, the more time you spend lying down the better, maybe watching a couple of films. 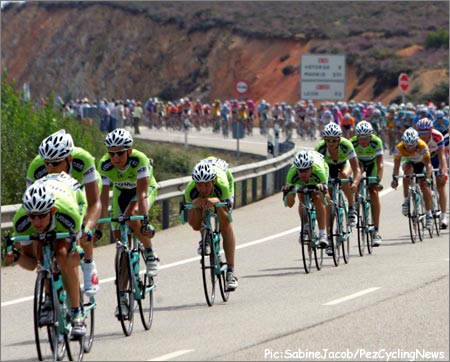 Vuelta stage 7: Liguigas on the front – trying to outrun the mysterious bull.

Pez: Are there ever occasions where a rider just stays in bed all day because he is so tired?

Magnus: We’ve all been in that situation, especially if you are catching a bit of a cold and are feeling weak. Even if you take my situation today, I’ve hardly moved off the bed all day.

Pez: You were rampant in the finale on Saturday for Luca Paolini – 70 kilometres per hour stuff.

Magnus: Yeah, with a lap of the finishing circuit to go there were still two guys up the road. CA had used-up all their guys in the chase (for points leader Thor Hushovd) and I found myself at the front and decided that I should string it out into a line and keep the speed-up for Luca to launch his sprint. It was an uphill sprint, Luca and I had discussed things and agreed he would go for it because the finish suited him better. I just went for it – full gas, I pulled the two guys back without any trouble and just kept going, it puts guys off when it’s that quick and I know that Luca can cope in that situation. The way it worked-out, Luca went for a long on but was swamped before the line.

Pez: The way you are going, shouldn’t you be ‘the man’ in the sprints?

Magnus: For flat finishes, yeah definitely, I have the power and the form; Luca and I have discussed it and he’s cool with helping me when the right time comes. I’m the kind of rider who doesn’t look any further ahead than the next stage in the book, but if the chance comes then I’ll take it.

Pez: Danilo looked good again on Sunday, has he got another stage win in him?

Magnus: The stage where he lost the jersey was one of those where you are riding along at a certain tempo then the climb to the finish just rears-up.
It’s not every rider that can cope with that situation, there are sprinters who can’t perform at the end of a long, steady stage they need action during the race to stop their legs from just dropping into a certain rhythm which they can’t lift out of. I think it was like that for Danilo, he said if there had been a second climb that day it would have been a different result. There are still plenty more stages to come that suit him.

Pez: You lost 36 minutes yesterday on the ‘Queen’ stage.

Magnus: Yes but I had things completely under control, the time-cut was 41 or 42 minutes so there was no problem and I was happy with how I felt at the end. It was a real ‘old-school gruppetto day’ – ride the climbs steady, go absolutely nuts on the descents then ride a bit on the flat. It worked-out fine and was able to ride the last five kilometres very easy.

Pez: Who do you think are most impressive in the race?

Magnus: The usual suspects – Valverde and Vinokourov look best with Vino favourite for me because he’s better against the watch.

Pez: What about Carlos Sastre?

Magnus: I don’t think he has it in him, most riders find it difficult to cope with two grand tours never mind three like he is riding.

Magnus: The profile looks like it’s little lumps, but the word is that they are short but very steep, real ‘walls’ – it will be a hard stage.

Magnus will be talking to us throughout the Vuelta.