At this half-way point of the season, and while some riders can coast from here on, there’s still much to prove and races to be won for the rest. Our man Maggy Backstedt checks in after an incomplete Tour, with his eyes set on redemption.

———-
After having pulled out of the Tour feeling like I had done 15 rounds of kickboxing and been knocked out 5 times, all I could do the week after was rest. I was having a seriously blocked nose and was coughing pretty bad.

It was pretty nice to come home and see my wife and 2 little girls. I think sometimes they miss me more when I’m gone than I miss them, this due to the fact that I’m so busy all day long that I basically haven’t got time to miss them too much, there is always something going on at the tour.

The weekend after I pulled out I went in to do some studio work at Eurosport in the UK. That is something I really like to do and especially when it is on such an important stage as the last tt of the tour. Looking back at this year’s race I think it was one of the best Tours I have ever seen. Right up there with the one LeMond won by 8 sec over Fignon. 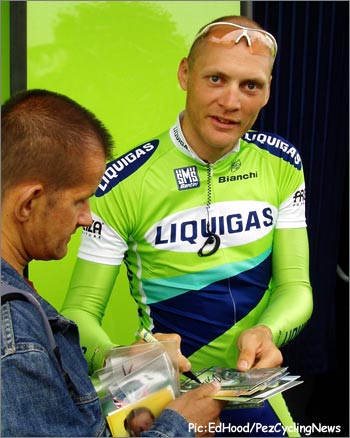 At the Tour’s stage 8 start, Maggy was his usual self, signing autographs for fans. A few hours later, he was just the opposite – abandoning the race due to a bad cold.

Now I’m back in training again and trying to get myself in to my best form for the Vuelta, I do have a couple of races coming up before that though. Hamburg and Tour of Denmark. Then it’s 20 days off racing with some very high level work.

I feel pretty happy with how I was going at the tour, but there is still a lot of room for improvement, especially on the top end, like sprints and shorter hills. This is going to be addressed from now on. Steve my trainer, has put together a program for me and no doubts it will be hard enough to make anyone throw up at the end of the ride. Looking forward to getting on with that one.

Well folks, that is all I have to come with right now, but rest assured I will have some more next time. Hopefully some good stories from the Tour of Denmark.

Goodies of the last few weeks.
• Rocket 7 shoes: finally someone who actually makes “CUSTOM SHOES”! When will custom seats come out??????