The first time we rang Magnus on the Monday after the Vuelta finished, his manager, Martin McCrossan answered – the Big Guy was still asleep. I guess he’s due a long-ly after all those kilometres around Espana. He was bright, breezy and on the ball next time we rang though.

PEZ: A good Vuelta or a great one?

Magnus: A good one. Good on a personal level too, I was perhaps hoping for something more in the way of results but to get to Madrid and finish a three week tour is a good base for next season.

PEZ: You were in a good position coming into the finale yesterday.

Magnus: I was in a good position but I just didn’t have the legs. I got out of the saddle to go, but there was just nothing there to play with. There were a few guys well positioned into the last corner but like me they just didn’t have it. It’s like that at the end of a three week tour, sometimes you have the legs but other times the tiredness has caught-up with you.

PEZ: Are the Liquigas management happy with how the race went?

Magnus: Yeah, it was a good race for the team with two stage wins and a spell in Oro. 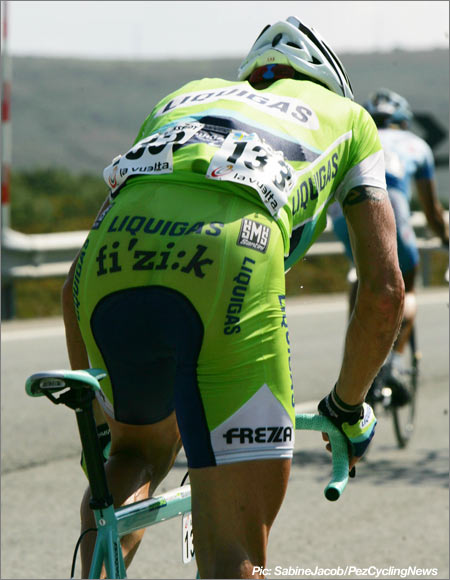 PEZ: What were the high-lights of your seaon?

Magnus: Fighting back into good enough shape to be on the start line of the Tour and going all the way to Madrid in the Vuelta.

PEZ: So what now?

Magnus: Three weeks where I won’t touch the bike, then I”ll start riding the track. I want to ride the points and pursuit in the Moscow World Cup at the end of the year. I’ll also be riding the Revolution meetings at Manchester track over the winter.

PEZ: Word is you will try for derny-paced hour record again.

Magnus: We’re working on it now but we need a sponsor, hopefully we’ll be in a position to announce something in the next few weeks.

PEZ: Who are your favorites for the Worlds?

Magnus: I was very, very impressed with Luca Paolini (Magnus’ Italian teammate) throughout the Vuelta (Paolini quit the race after the second week to prepare specifically for Salzburg. ) I think he has a very good chance because everone will be watching Paolo Bettini from the Italian squad and that will work in Luca’s favour. The time trial is harder to call, but I think Cancellara (Switzerland) is the man, although it will be a very open race, which Mick Rogers (Australia) could win again.

Magnus: Not at all, I want to do a good ride in Paris-Roubaix, and the Tour prologue in London is a big priority.

PEZ: And how will you spend those three weeks off?

Magnus: With my wife and kids, we might go away somewhere, but the important thing is just to be with my family.

Enjoy that leisure time Magnus, it will be Het Volk before you know it.

ASK THE BIG MAN!
Gotta question for Maggy? Send us your thoughts and ideas, and we’ll choose one (or more if we feel like it) for Magnus to answer with each diary.

Send your questions to: [email protected]