Rider Interview: There a few cases of riders in Britain going on from their local time trial scene to be WorldTour riders, but there are not many who have gone the other way. Polish fast-man, Marcin Białobłocki has done just that and has set some impressive records against the clock. Ex-tester, Ed Hood caught up with the current British, 10, 25 and 50 mile time trial record holder for a chat.

When I raced back in the 70’s and 80’s and did my pre-season training on 42 x 17 fixed wheel, if I did 50 miles in three hours, that wasn’t a bad work out. Then, when we started training on our road bikes, if we did 50 miles in 2:30 – that was a decent session. And on the race scene in the 70’s there weren’t too many of us in Scotland who could beat two hours against the watch for 50 miles.

That’s the ride big Polish ‘chronoman’ Marcin Bialoblocki (NOPINZ) produced recently in a time trial in England. He’s been a round the British race scene for years but it’s only in the last few years he’s began to specialise in time trialling.

His first UK results show in 2008 with sixth in the GP of Wales; by 2009 he was winning the Girvan (R.i.P.) Easter Three Day. The 2010 season saw him third in the East Yorkshire Classic with a pro contract with Motorpoint coming his way for 2011 when he won the Jock Wadley Memorial Race and a stage in Ireland’s legendary RAS. ‘Node 4’ it said on the jersey for season 2012, second in the Lincoln another RAS stage the hi-lites. It was ‘UK Youth’ for 2013 with a win in the ‘Perfs’ and the overall win in the RAS. ‘Velosure’ was the team for 2014 with third in the Lincoln and another RAS stage. For season 2015 he joined One Pro and there was the Polish National TT Championship, the TT stage in the Tour of Poland, ninth in the Worlds TT and second in the Chrono des Herbiers – not a bad old year. The following year, 2016 and still with One Pro he was second in the Polish TT champs to Tour de France stage winner, Maciej Bodnar, ninth in the European TT champs and 14th in the World TT Champs. In the UK he produced a stunning 16:35 minute ride to annex the British record for a 10 mile time trial. 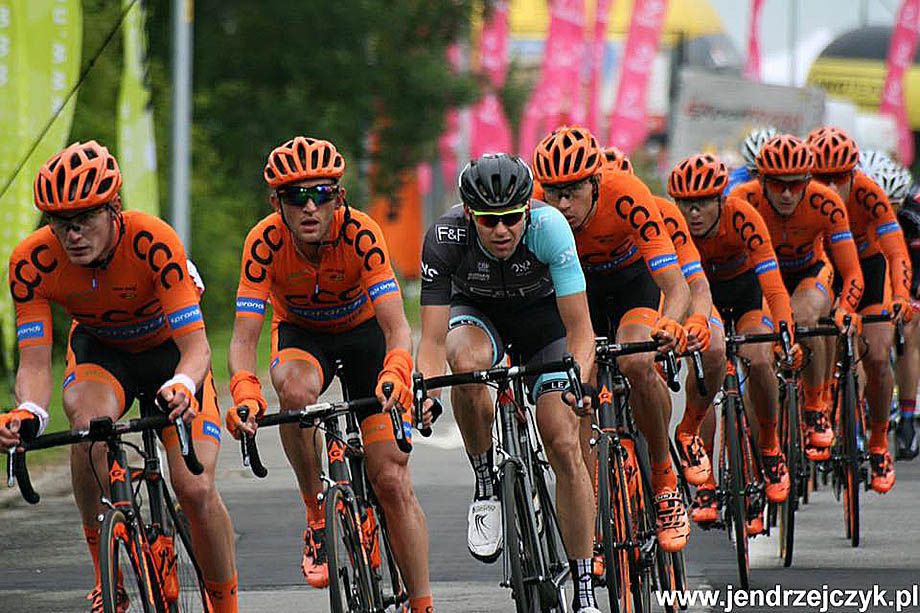 Last season he was with CCC Sprandi Polkowice, rode the Giro, was second to former World Road Race Champion, Michal Kwiatkowski in the Polish National TT Champs and was 12th in the European Time Trial Champs. This season thus far he again finished second in the Polish TT Champs 17 seconds behind Tour de France 2017 final TT stage winner, Maciej Bodnar but 16 seconds ahead of former World Road Race Champion, Michal Kwiatkowski; and on the British stage produced a blistering 42:58 ride to take the British 25 mile time trial record. It’s fair to say then that he’s one of the world’s premier riders against the watch.

We caught up with the man who’s now in possession of the British, 10, 25 and 50 mile time trial records, as well as the 100 mile national time trial title.

PEZ: Thank you for speaking to us, Marcin and many congratulations on your successes – lets’ talk about your 100 mile title first.
Marcin Bialoblocki: I was happy to win and take the national title with my 3:17:39 [Bialoblocki won by almost six minutes, ed.] but a little disappointed to miss the national record, which is a 3:16:51 [held by Adam Duggleby, Vive le Velo 2017, ed]. But the course wasn’t a fast one and in the last hour I was in a lot of pain, not with my legs but with my feet and backside, I just wasn’t comfortable at all. 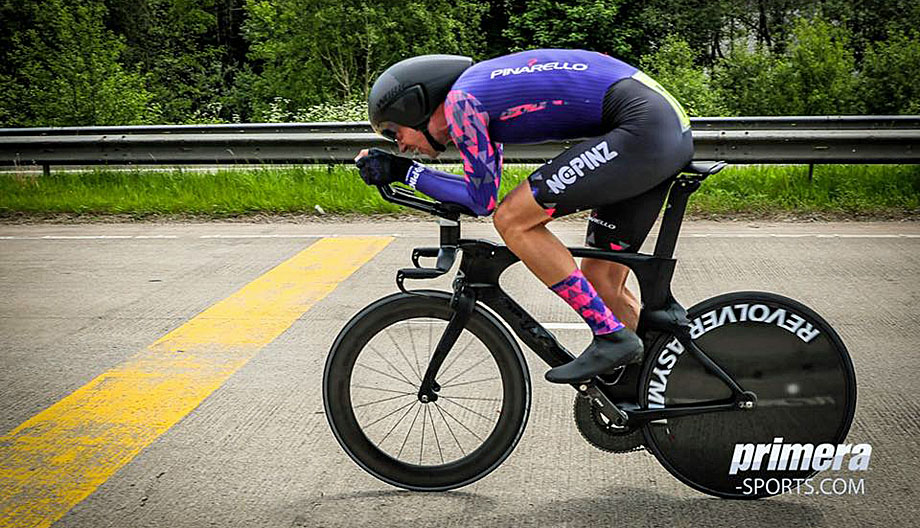 PEZ: 50 miles in 1:30:31 – did you have a ride like that in mind when you started; you took four minutes and six seconds off the old record!
I have two friends who are big into time trialling and they thought I could go sub-1:30, that was my goal and my pacing was near perfect but it wasn’t the fastest day so I was a little disappointed not to go below 1:30.

PEZ: How did you judge your pace?
On watts [his average was 387, ed] and ‘feel’ – I’m not looking at my power meter all the time but at the start it’s good for checking you’re not going out too hard. But a lot of the time I’m riding instinctively. 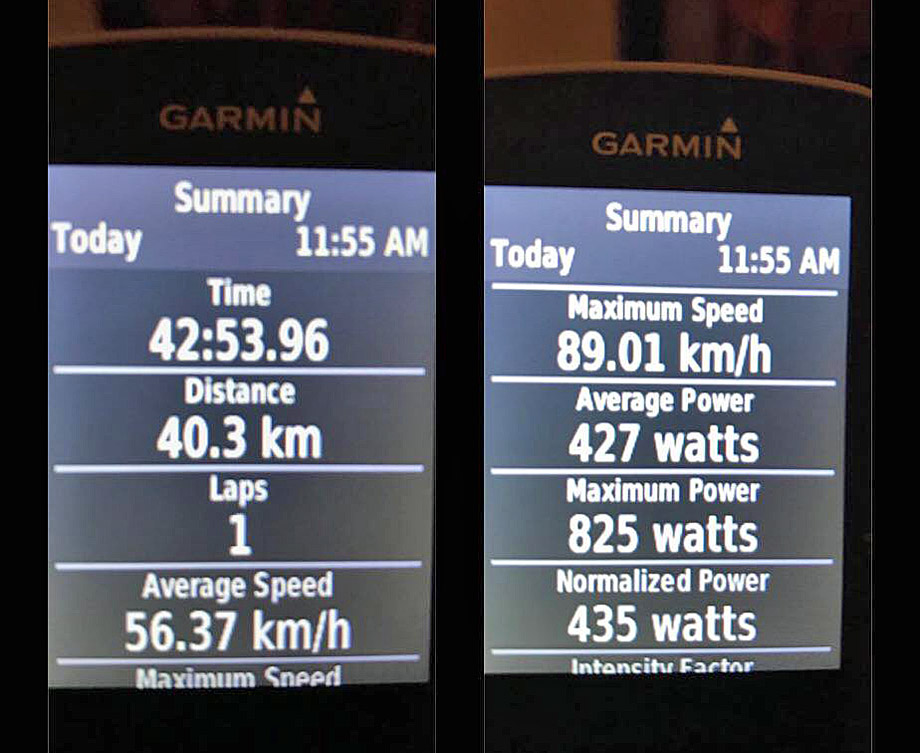 PEZ: What about food and drink?
I had one 600 mil. bottle and two gels.

PEZ: And still on the Pinarello Bolide?
Yes, it’s an incredible bike, very fast. I was on ‘Revolver’ wheels shod with Vittoria tyres, I don’t have ceramic bearings in my hubs yet but I do run them in the bottom bracket and I’m running over-size, Ceramic Speed bearing rollers on my rear gear, all lubed with a special oil. I have to mention my NOPINZ skinsuit too, over 50 miles it saved me so much time with reduced drag. 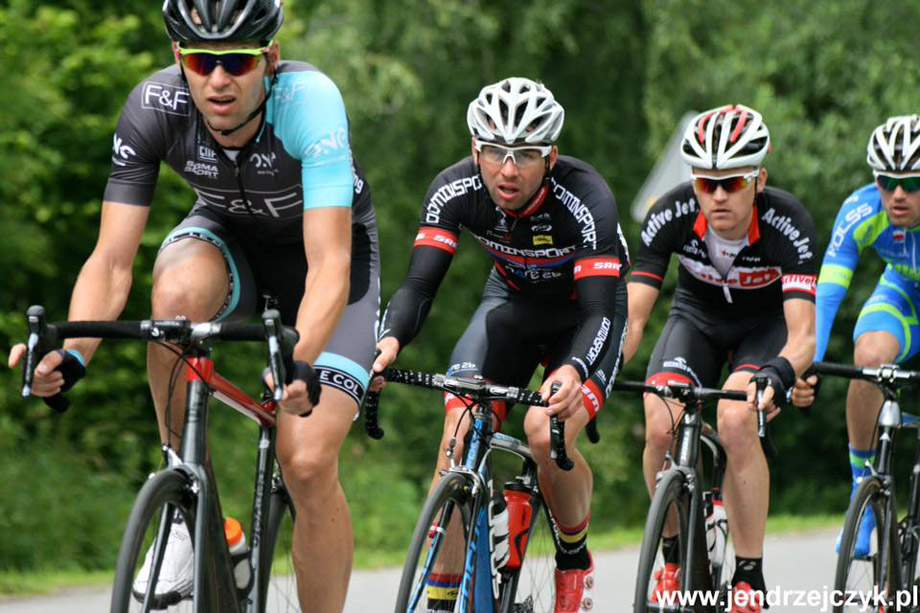 PEZ: Did I see that you were wind tunnel testing?
No, but I did do some work on my position, my saddle and tribars are little higher than they were, now.

PEZ: How much did your training vary from your usual preparation for 10 and 25 mile time trials?
I didn’t do any specific preparation for it, my training right now is all geared towards the European Time Trial championships in Glasgow, next month. The distance wasn’t going to be a problem because I do four, five, six hour rides as part of my training programme. 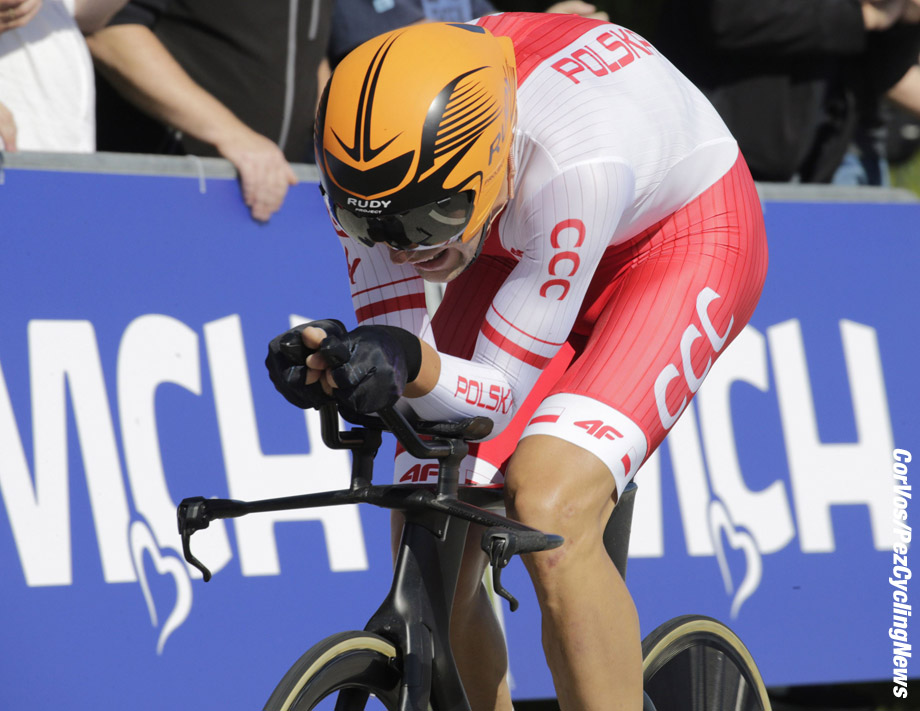 PEZ: And the inevitable question; can you faster?
Yes, sub-1:30 is possible, there are aspects I can improve, I can find a few more watts and be a little more aero – and I found the turns on the course stressful, I was nervous going into them and that cost a little time.

PEZ: And will we see you go for another crack at the 100 mile record?
For sure I’d like to try but it would have to be on a fast course and I don’t know if there are any ‘100’s’ on fast courses still to come, this year and whether I could fit it in. 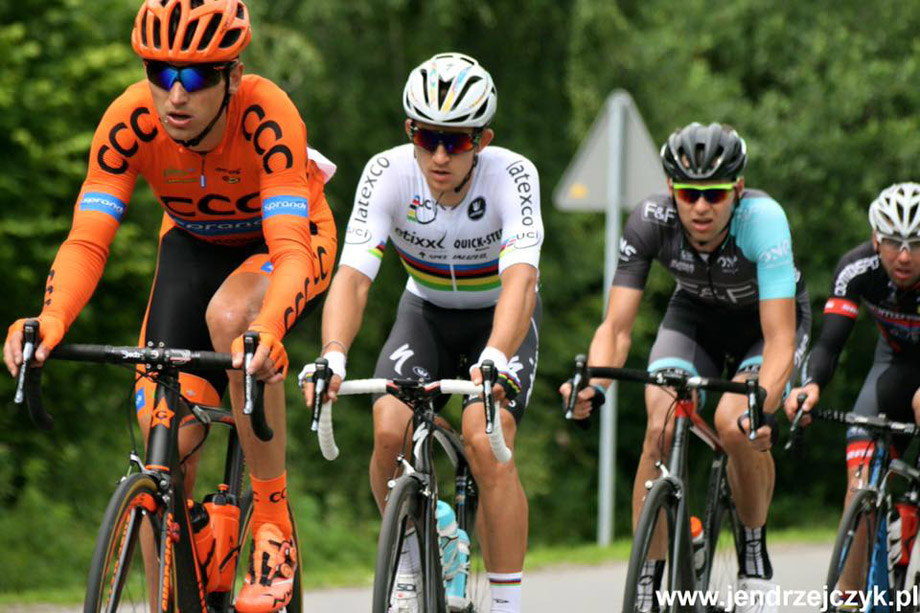 PEZ: And we’re going to see you up in Scotland?
Yes, for the European TT and for the British 10 mile championship at the start of September.

PEZ: I’ve asked you before – what about an hour record bid?
It’s something I’ve thought about but it would cost a lot of money and I would need to find a sponsor. 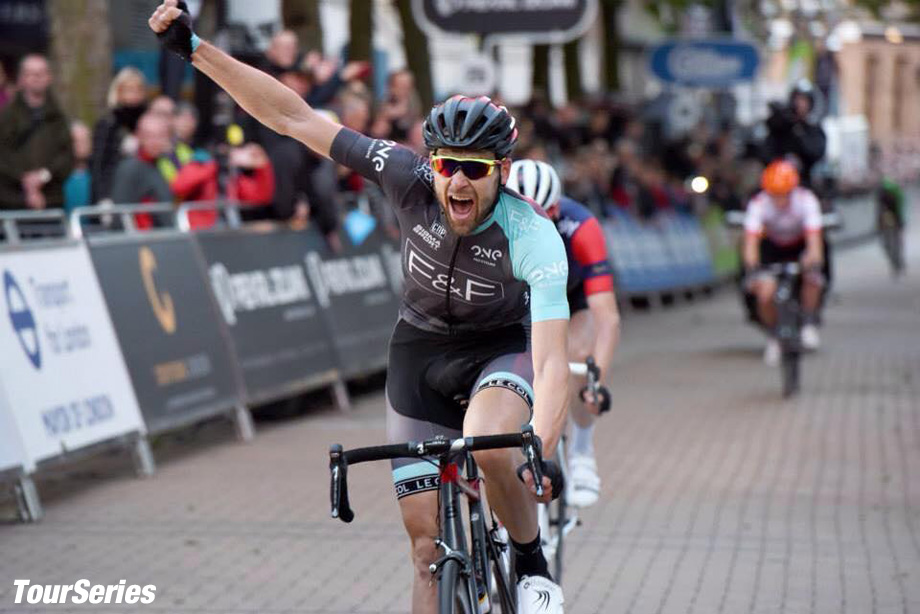 PEZ: What’s on the Marcin ‘to do’ list, still?
This weekend I have a time trial in Wales; but it’s not on a fast course, so no records. Then I have the British 25 mile championships on August 5th and the Europeans – which are a big goal – on August 8th. I hope to ride the Worlds too – and yes, maybe that hour record. . .

# Pez will be at the European Championships and will keep you posted on how the race goes for the big man from Poland. # 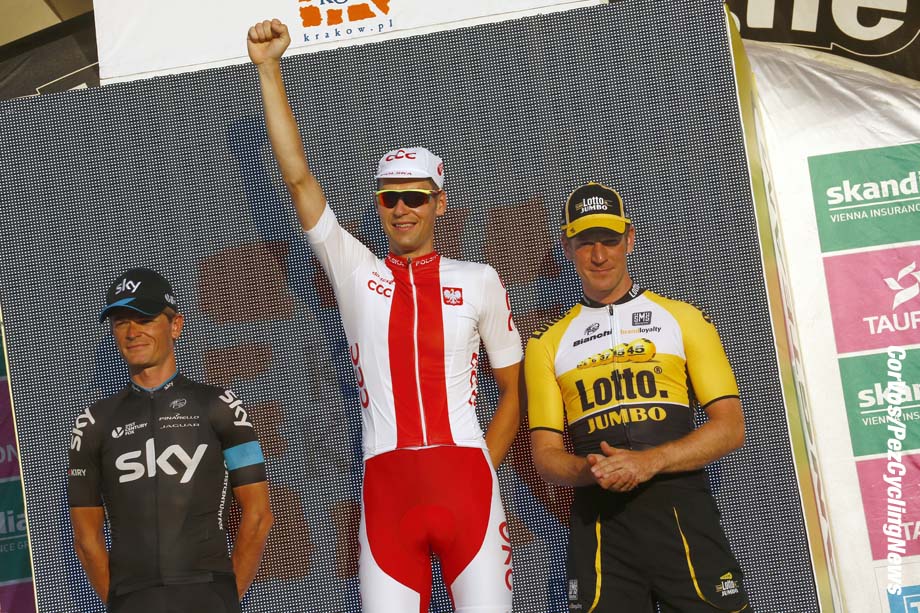