How many of us would say no to an invite to spend a sunny weekend at the new Domina Vacanze village in Egypt? Especially when the invite comes from Ernesto Preatoni – the man who’s put his faith and money in a team that not only has the World Champion; Mario Cipollini, but also in two young cyclists who are ready to learn and do damage in the stage races and the Classics, Michele Scarponi and Daniele Bennati. 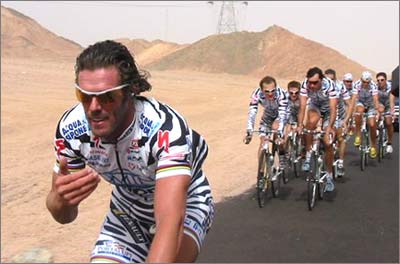 The World Champ leads his boys on their own Desert Storm at the official team presentation in Egypt. Cipo is a natural leader who has earned the respect of his team bosses, team mates, and the peloton. Says Mario Scirea: “He asks a lot of us, but he also delivers on his promises.”

The official Domina Vacanze-ElitronTeam Presentation took place at the superb resort, Domina Vacanze Coral Bay in Sharm El Shiekh, this past week-end Feb. 7-9. PCN was there (- of course!) to ask your questions in the promised interview with the RE LEONE himself. The interview did happen but,I’m sorry to say, I didn’t have time to ask all 51 of your questions! 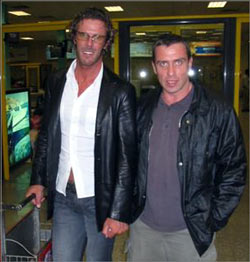 In spite of a growing mutual respect, Dunc says he and Mario are NOT holding hands…

I spent a lot of time with Mario Cipollini as I wanted to know a bit more about the real Mario, on the plane, at the Gala Dinner (with a great Moulin Rouge show), in a bar and Dancing in the disco late into Saturday night ( do you know that when Mario dance’s he moves only his top half of his body and not his feet!!)

Mario Cipollini is an honest, generous, fun loving guy. He’s also true professional who believes that there is a time and place for everything. He is man that can talk to anybody at any level and certainly the man that has put “ SHOWBIZ” into cycling, Mario can be a star, in the way he dresses to the way he confirms his weakness for beautiful women, but put him on a bike and he transforms into the perfect role model for his team, his teammates, and cycling. Mario is a PRO in every sense of the word.

PCN – Is your preparation this year any different from the other years?

M.C – No , it’s more or less the same as the other years, my training consist of all the aspects that I need for a race, resistence, strength and agility. I don’t do much gym work, maybe I do a bit in the dead times of the year and I certainly don’t use rollers as I don’t like them.

PCN -Tell me a bit about what you felt after the Worlds and your aims for the years to come?

M.C – When I think of Zolder I still get goose pimples! It was an incredible feeling but what really made it special was the fact that it made so many Italians happy, it amazes me that there are so many people, old and young, cycling fans and not, that shake my hand and say nice things,this is what makes me happy.

Obviously after such a big emotional rush like that, I with the team had a bit of a down, we couldn’t find any harmony in our training, which wasn’t good so we all had to put our heads together and get it together, plan our year and train hard.

The World’s in Hamilton this year isn’t my aim, I don’t think I will be part of the team. My aim is obviously the Milano- San Remo, the Giro and hopefully the TDF. Then I will take time off and see if I will continue until the World’s in Madrid 2005.

My retirement at the moment is unthinkable, I don’t know when or how I will retire as I don’t have any limits in my life. 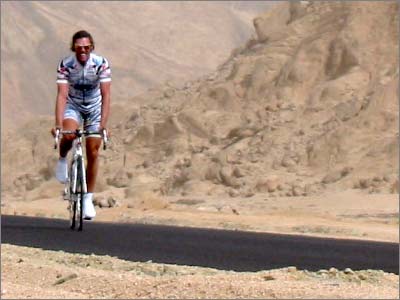 Shimmering in the Eygtian heat – that’s not a mirage! With great triumph comes great responsibility – the Cipo of old has been replaced by a man who truly understands his place in the sport, and is genuinely interested in making his influence positive.

PCN – Bike, cleats and tech stuff: I saw you trying a new pair of Specialised shoes today and a few adjustments to your bike. Has anything changed?

M.C. – No, practically the same as last year, a few touch ups to improve the stiffness , not because the bike isn’t right as it’s a great bike but just some little improvement to make it even better.

PCN – Who do you see as the next Cipollini?

M.C – Good question… Only the road can tell you the answer to that!

PCN – In your team who do you see as ready to emerge this year?

M.C – I think about myself this year and can’t take responsibility for anybody else. Scarponi has the right stuff to do well but the average age of a good cyclist is getting older, they seem to mature later. Years ago cyclist like Saronni and Fignon at a young age were winning, but it’s not like that anymore. Now in cycling you need a different kind of development, there are more medium to high level cyclists so to improve you need more time and experience . 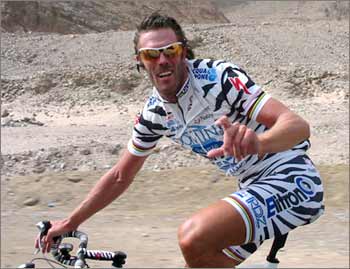 “Scuza, would you happen to have any Grey Poupon?”

PCN – How did you find this week-end ?

M.C – It’s been unusual and special. I haven’t had time to really enjoy it as there was little free time. The team’s presentation could have been done in many different ways, more diluted but it’s been good promotion for the team and cycling. I would have liked to have spent more time with my team mates and gone on the beach, had a swim in the sea but I except that we were here to work and there will be time to play at the end of the year.

M.C – Champion is a big word. I have no one rival that I would like to go head to head with. Every sprinter is convinced that they are the strongest. Every era has it’s champions, things change, the roads, bikes. I’m just happy with what I have achieved. If people think of me as a champion it makes me very happy I just hope the years to come cycling will grow as it really has touched the bottom. This year like the last, we will be in many to fight out the sprint and this is only healthy for the sport.

PCN – You are considered a “Superstar”. When you retire will Italian cycling lose out?

M.C- No I don’t think so. I don’t consider myself that important. There will always be others and maybe and I hope they will do better. I just do my best and hope to leave a positive mark in cycling 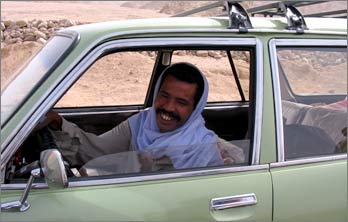 Although this gent is a graduate of Cairo’s top driving school, the team did not need anymore drivers.

PCN – Do you worry about what the press say about you. Many consider you a Playboy?

M.C – Not anymore. I go straight on my path. I have my ideas and thoughts and I’m truthful to myself. I think my friends respect me for that. Journalists can say what they like. It used to worry me but with time I’ve understood that you can’t change what some of them think. I know that the people that really know me like me and it would be impossible to get everybody to agree and like me, wouldn’t it!? 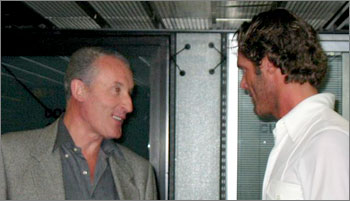 PCN – Tell my about the Rainbow jersey , the problems and the pleasure it gives you?

M.C – The jersey is special and is to be respected. Everytime I go to start a race with a certain responsibility . I don’t think it will give me any more problems than I had before as I have always been a marked man in the sprint. The best way to celebrate this jersey will be to win. It won’t be a boring year for me and I will enjoy it.

PCN – Cipollini public and private, how is he?

M.C – Well you have spent time with me so you can see a little how I am. Apart from that, in public I am a pro-cyclist that does his job. In private I live a life like all the others. I have a family that brings it’s satisfactions, worries, fears and problems just like everybody else.

PCN: Your personality is strong. Do you think it has over-shadowed your results?

M.C. – Oh… I don’t know. I think a modern day sport needs an image. For me it’s important to do and taste sport for enjoyment. A rider works to achieve a result, with or without a strong personality he must be appreciated for that, then if he transmits more through his personality then that’s a plus for cycling.

PCN – Do you think Armstrong can give more to cycling and how is he considered in the Peleton?

M.C. – I think we can all give more. If he can not transmit all that he does on the bike, off the bike then that’s just a conseqence of his character. Armstrong in the peleton is America. He is number 1 and respected. He is all that America is. Big sponsors, good organisation and positive, which doesn’t happen here in Italy. He is so strong that I don’t think he will just his fifth TDF but also his sixth.

PCN – And Pantani. Are you sorry that your Partnership with him didn’t come off?

I found Mario very relaxed. I did notice that when we started talking about the future of cycling he would talk all day. You can feel that he loves this sport and wants only the best for it. He wants to give now so that cycling will profit in the future and after so many years in cycling and 181 wins if anybody knows about cycling ,it should be him!!

SPECIAL NOTE: Re Win Cipo’s Jersey – We have not announced the winner yet, because we were unable to ask all the questions reader’s sent. The jersey will instead be awarded in the next 2 weeks by random draw from all entrants – so stay tuned!

See The Tour With ExperiencePlus!