In-between eating mussels and drinking beer at the Etixx- Quick-Step party on the Tour de France rest day, Ed Hood managed to also get some work done. Mark Cavendish’s right-hand-man in the sprints is Mark Renshaw, he’s been a lead-out man and a sprinter in his own right. Ed caught up with Renshaw two days before he announced he would not start stage 19 due to a severe migraine.

Have you ever wondered how Mark Renshaw is so damn quick?

Perhaps it’s to do with the fact that like many of the Aussie road stars of this generation he started life as a track rider. He was twice a member of the Australian squad which won the world junior team sprint title in 1999/2000 and also bagged the world junior kilometre championship in 2000. As a senior he was part of the ‘Aussie Machine’ which won the Commonwealth Games team pursuit with a new world record in 2002. 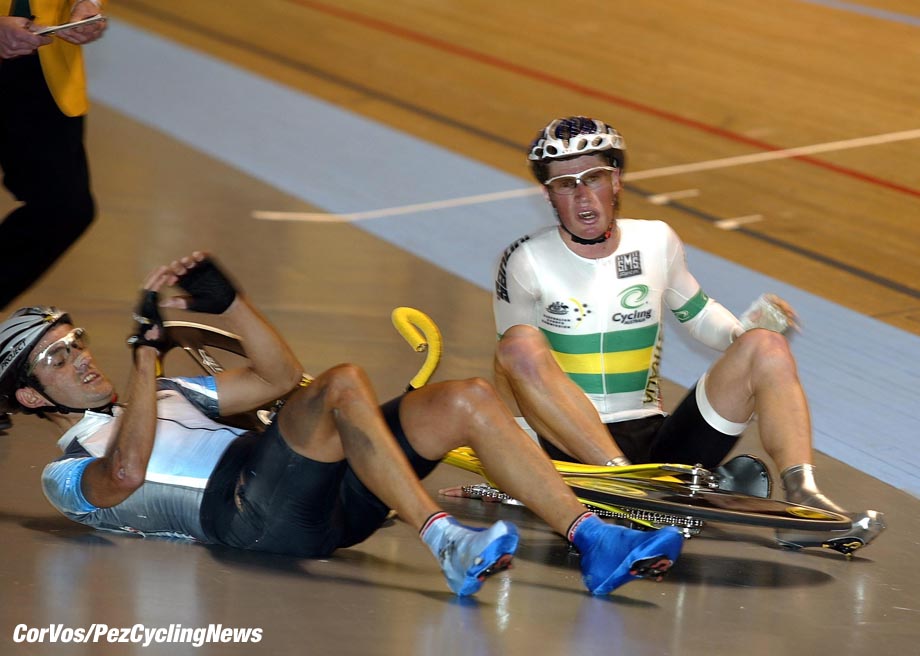 But his eyes were on a road career and in 2003 he rode stagier with the French F des J team which lead to a ride for 2004 and in 2005 he rode his first Grand Tour in their colours – the Giro. The following season he rode his first Vuelta in the jersey of Credit Agricole and scored a notable win in the tough Tro Bro Leon race up on the ‘ribinou’ – farm tracks – of Brittany. 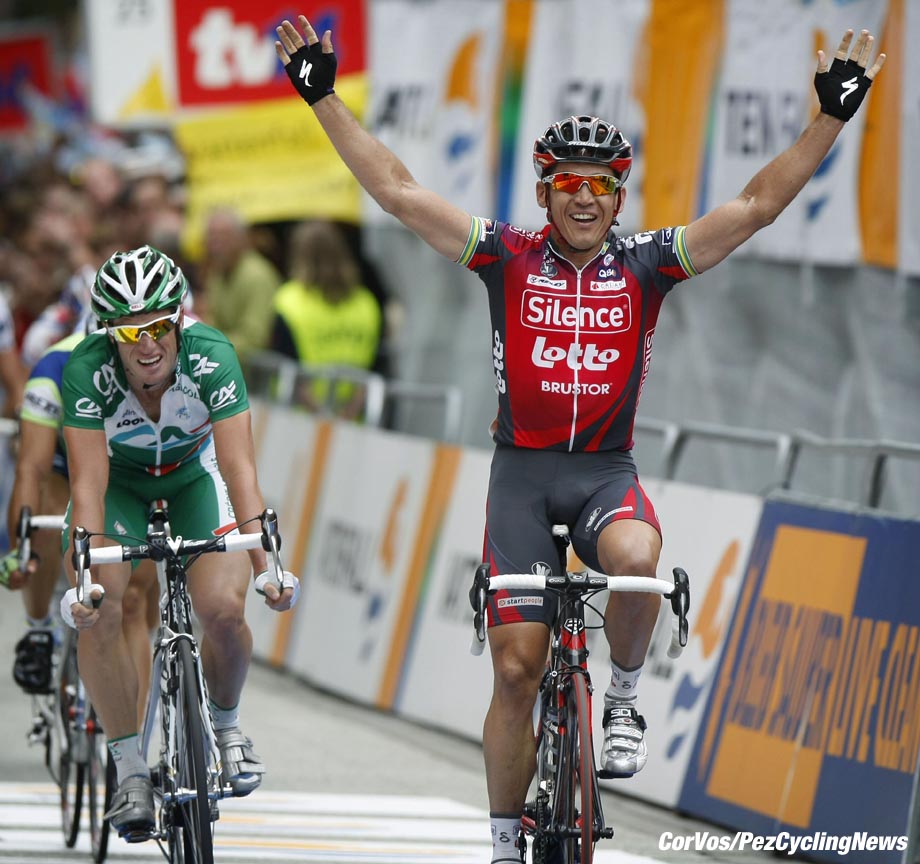 Second to another Australian fast-man

In 2007 there was a win in a stage of the Tour de L’Oise and his first Tour de France ride came in 2008 when he also won a stage in the Tour Down Under. In 2009 he entered the phase of his career for which he is perhaps best known – with Columbia/HTC/Highroad as Mark Cavendish’s right hand man in the sprints. So well honed was their act that in the final sprint of the 2009 Tour de France Renshaw lead ‘Cav’ out to victory and still finished second on the stage. There was also a TTT victory for him in the Giro, that year. The Tour wasn’t so happy for him in 2010 when he was declassed for head butting Julian Dean in a hectic finale – but there was a stage win in the Tour of Denmark.

In 2011 there was another Giro TTT win and a stage and the GC in the Tour of Qatar. Season 2012 saw him have the chance to be a ‘protected’ sprinter rather than a lead out man – the team was Rabobank but with big home sprinter Theo Bos on board at Rabo, Renshaw was always going to play second fiddle – but there was a Tour of Turkey stage win. 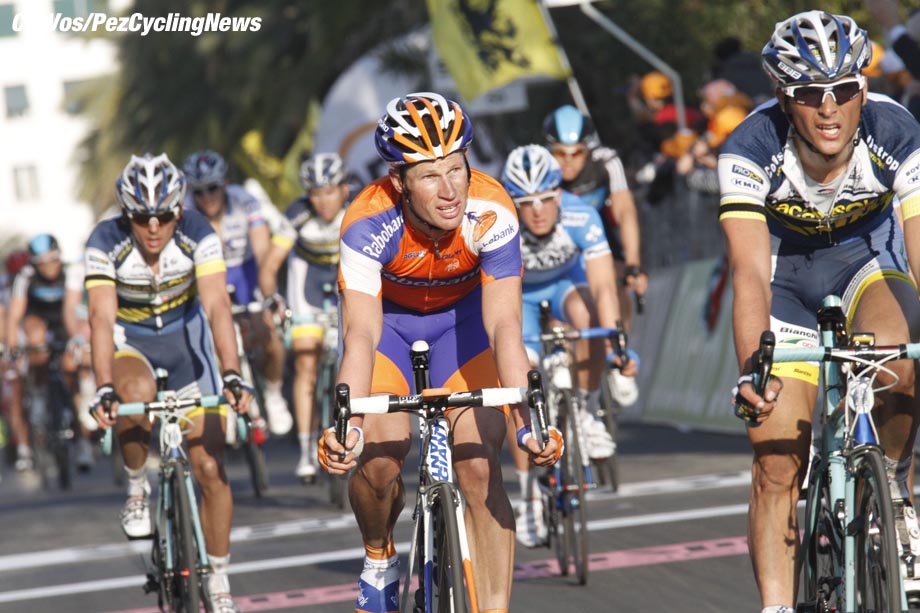 Despite politics taking a hand with Rabo in 2013 and the team becoming ‘Blanco’ there was a good win in the Clasica Almeira – one of Spain’s few surviving one day races – and a stage in the Eneco Tour. 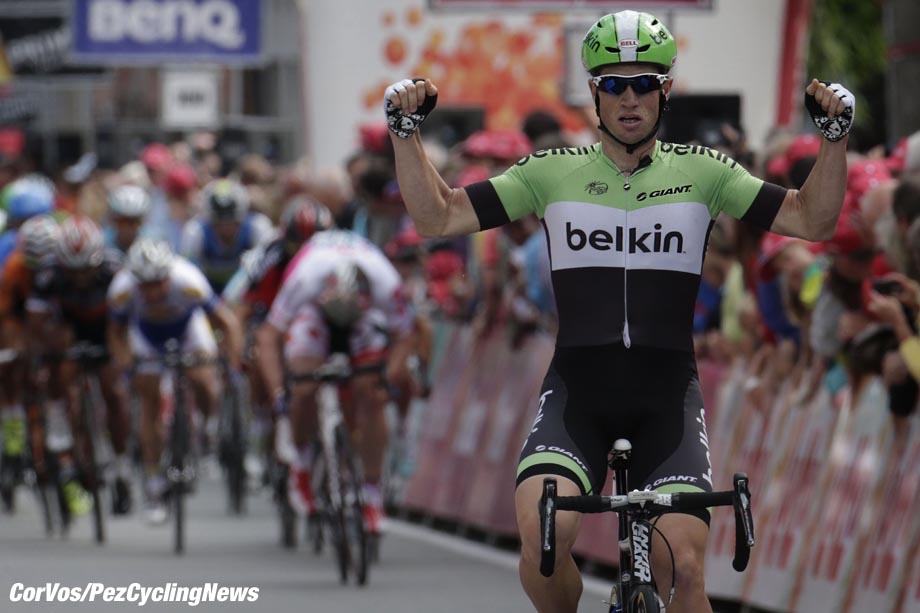 Stage win in the Eneco Tour with Belkin

For 2014 he was back on familiar ground as Cav’s ‘pilot fish’ with Belgian ‘super team,’ QuickStep – with wins in the Tirreno TTT and a stage in the Tour of Britain. The 32 year-old from Bathurst in New South Wales is still with Patrick Lefevre’s legendary team for 2015 and PEZ caught up with him on the rest day in Gap. 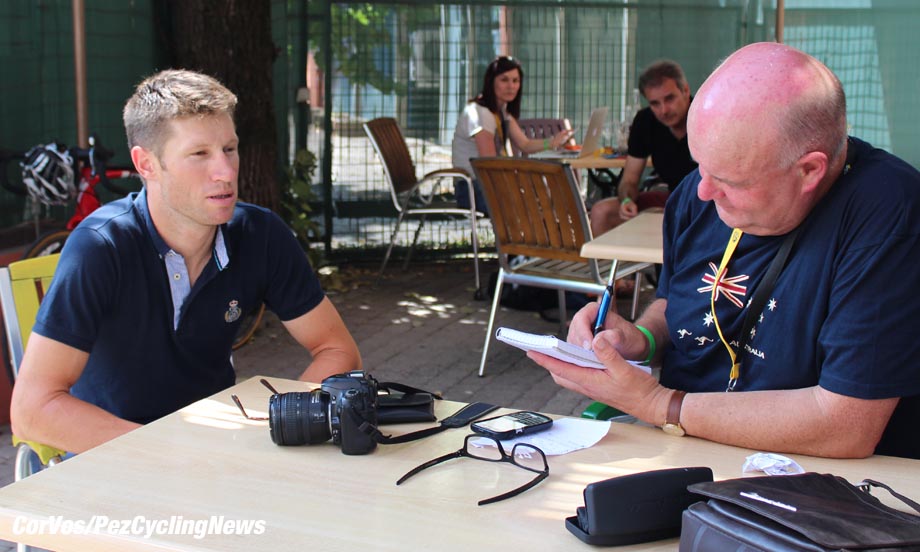 We opened by asking how team mate Tony Martin is after crashing out of the Tour on Stage Six and breaking his collar bone?

“He’s good, we’ve had a little bit of contact and he’s on the road to recovery; he’s finding it tough watching the Tour on TV though – but he’s a hard man and will already be on his way back.”

PEZ: How many Grand Tours now, Mark ?
“This is my eighth Tour de France and I think all told I’ve ridden 15 Grand Tours – but that’s a guess!”

PEZ: That first week looked pretty wild?
“The whole parcours was challenging for the first 10 days, flat and very difficult to control – just riding in the bunch was even difficult because it was so hectic and nervous.” 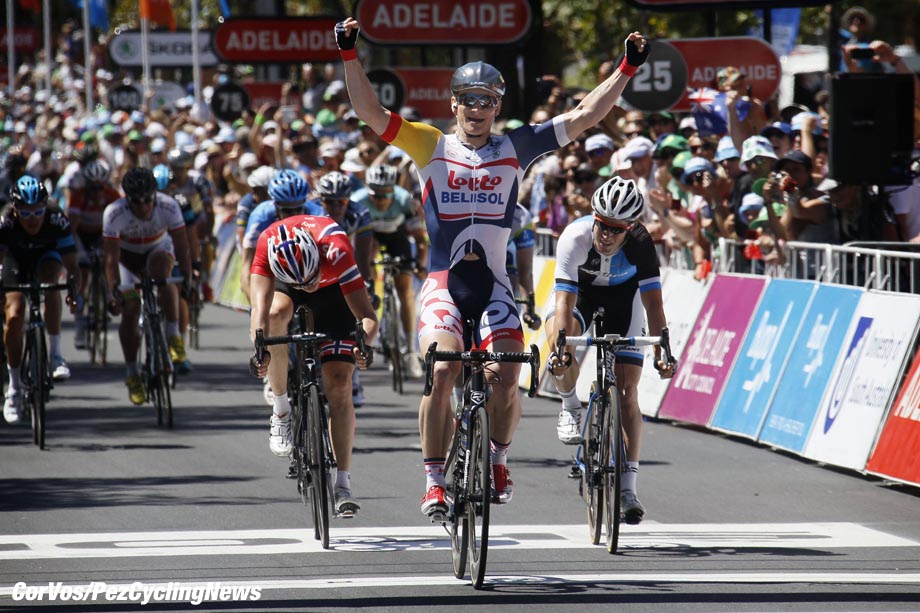 So close to Greipel in the Tour Down Under

There was a lot of road furniture and there’s more and more spectators all the time – and a small percentage of them are always going to cause problems. . .

PEZ: We were on the Col de Manse yesterday and the gruppo was enormous . . .
“Yeah, it was huge, that formed with about 30 K to go at the bottom of the climb. It shows you how much everyone is suffering when you see numbers like that back there. There were guys like Rodriguez in there trying to save energy because they’re so tired.” 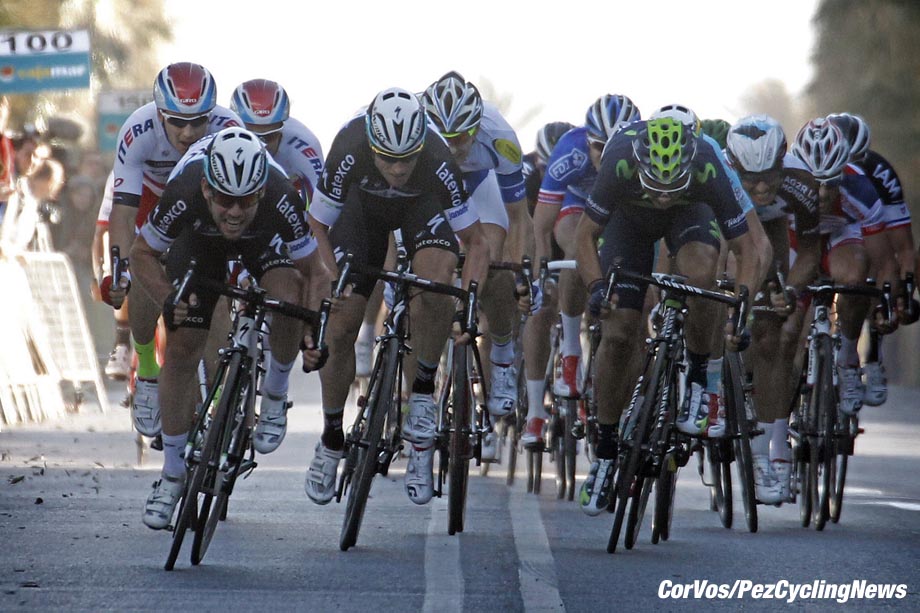 Lead-out work for Cav in Almeria

PEZ: Is your place beside Cav on a day like that?
“I’m with him a lot of the time; on the climbs neither one of us gets up them much better than the other so we tend to be together, yes – and there’s safety in numbers!”

PEZ: Who’s ‘the man’ in the gruppo these days?
“There’s not really anyone in that roll; it usually falls to the team with most riders in the gruppo – that tends to be the sprinters’ teams – Cav, Greipel, Kristoff. . . The DS in the car keeps an eye on what the situation but it’s a difficult thing to calculate because the situation is changing all the time – you always want to have time in hand, just in case.”

PEZ: Only four stages to go but half of the race’s big mountains still to come…
“I think there’s 11 down and 15 to come – it makes for a very hard conclusion to the race. It’s been a hard race, whilst the first 10 days had no mountains there were no real flat, pure sprinter stages – they were all tough. And now we have all these mountains packed into just four days; it’s going to be hard.” 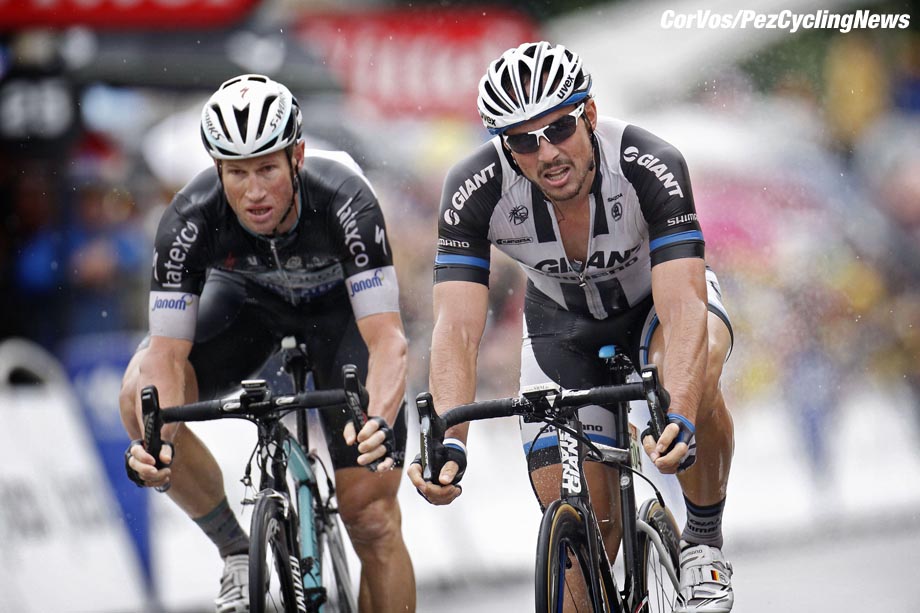 Tour’14; are the others getting faster?

PEZ: Has Cav slowed down or are the rest getting quicker?
“In the first sprint we made mistakes and that cost us dearly – then in the second one against Greipel I think there were a lot of nerves coming in to play with Mark and he misjudged it. (Cavendish didn’t contest the sprint which saw Greipel take his stage third win, the Manxman a victim of an overnight tummy bug, ed). But for sure I don’t think he’s lost any of his speed; there are a lot of factors in play – pressure to perform, nerves, contract negotiations . . . The trouble is that he’s expected to win and it’s big news if he doesn’t . . .”

PEZ: The other teams seem better organised than they used to be in the sprints, these days?
“For sure. Lotto has progressed a lot but it’s not just down to your train – you need a little bit of luck, too. Greipel had luck on his side for his first two wins but produced two really fine sprints to win. Kristoff is hard to beat in a long sprint but he’s had a massive early season and he must be tired – he looks in top shape but none of us are robots!”

Mark Renshaw had to announce his withdrawal from the Tour on Thursday evening and so will not start stage 19: “Yesterday at the end of the stage I came down with a migraine before the final climb, and the pain never went away overnight, I woke up with the same pain this morning. It’s pain from really stiff muscles in my neck, and that pain from the stiffness has gone up into my head in the form of a migraine. Every hole, every bump, every rough part of the road I could feel the pain in the back of my head with this stiffness in my neck. I’ve never experienced anything like that before. Together with the team we decided for me to stop. There is no way I could keep going like this. I already knew when I woke up this morning that it’d be hard to finish the stage. The pain was so intense and never lessened. It’s a shame that I cannot finish this Tour de France after riding with my teammates for two and a half weeks. Especially since I was getting ready for Paris on Sunday and my legs were okay. I’m really sad about it, especially since I can’t be there to help Mark Cavendish for the sprint on Sunday. But I will absolutely be there in Paris to give my full support to my teammates in any way I can, and I wish them the best of luck in these final two days in the Alps before then.”

# Thanks to Mark and Etixx – Quick-Step’s Press Officer, Alessandro Tegner for arranging our interview – and for all those moules et frites! 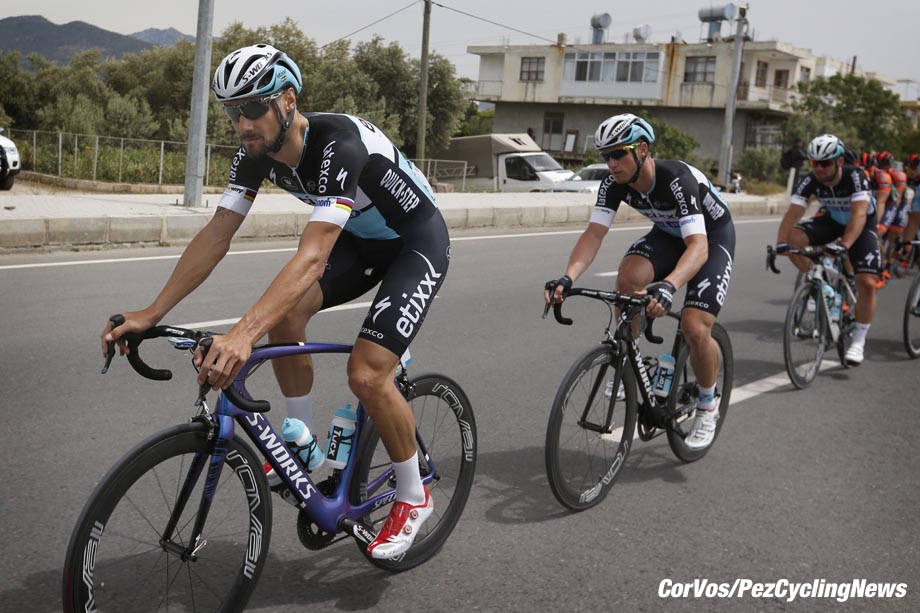 Sidi Wire is Tinged in Fuxia