Sportsmen’s “Agents,” or should that be, “Personal Business Managers?” Some of the English Premiership soccer clubs have banned them from the premises! With the transfer flood gates set to open on September 1st, we thought we should find out a little more about these mythical creatures.

Martin McCrossan is the man who handles the wheeling and dealing for Pez regular, Magnus Backstedt of Garmin; as well as commentating for Cycling TV. Martin was just off his bike when we caught up with him – maybe he’d have a weak moment?

PEZ: Is it ‘agent’ or ‘manager,’ Martin?
Martin: I’m in ‘public relations and sports management.’ It’s not really like it is with the football agents. I don’t just appear every 24 months at contract negotiation time, cream off my cut and then vanish for another two years! I see my role as making my client’s lives easier. Over the past few years I’ve been building up a network of support staff; coaches, physios, so that if a rider needs help or advice, I can provide it at the drop of a hat.

PEZ: How did you get into it?
Martin: Four years ago, I was at Newport (Wales) track, doing some training and I ended up sitting next to Magnus Backstedt – he already knew me from my writing and TV work – who had just won Paris – Roubaix. He was saying how much his life had changed since the win and he needed someone to help him manage the business side of his career. It was something I’d always wanted to get into; I do think it was fate that we ended up sitting together that day. 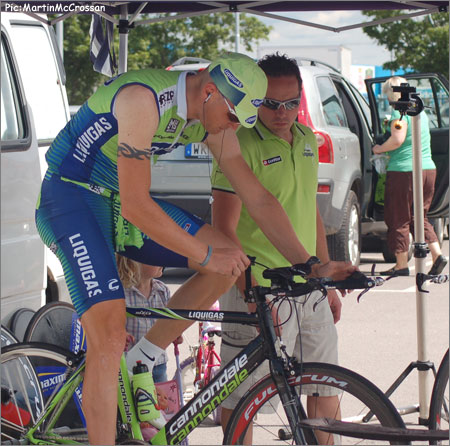 PEZ: Who else do you have on the books?
Martin: Apart from Magnus, there’s Dan Fleeman, Kieran Page and I have quite a few Swedish riders; Michael Stevenson of Amore & Vita, for example. I’ve also taken on my first lady pro cyclist – Louise Moriarty. It’s growing all the time; riders see what you are doing for others and like what they see. But you have to remember that no two riders are the same – it’s not a ‘one size fits all,’ job.

PEZ: How’s it decided, ‘who gets what?’
Martin: Utimately it’s down to sitting down and negotiating. We’re on the ‘inside,’ so we know what the going rates are. But you have to be realistic and it’s a ‘teams market’ at the minute, with squads disappearing and places harder to get. But we have experience, we talk to people and get to hear what’s being paid. The riders talk to other riders about money, it’s just like any job, really – when the bunch isn’t riding hard, it’s just a big, fast moving office!

PEZ: Is there a ‘talent scouting’ element to the job?
Martin: Yes, you look at riders who are coming up and think; “I’d love to work with him,” but it’s not just about physical ability. You have to be able to look inside their head and see if they have the mentality to handle the pro world.

I’m working with a Swedish team just now – Team cyclesport.se – to bring in sponsors and take the squad Continental; we had Alex Wetterhall riding the Tour de L’Ain with Pezula recently. He’ll also be in the Tour of Ireland, with another of my riders, Frederik Ericsson (Time-Van Memert) who is Swedish TT champion. I’m working towards cyclesport.se being my ‘development’ team, where I know I can place a couple of good under 25 riders, each year. Magnus is involved too, we’re investing profit from his Magnus Maximus coffee into the squad.

PEZ: In soccer, some of the team managers hate agents, what’s it like in cycling?
Martin: Cycling is very different, a lot of the team managers like to have riders recommended to them – to have CV’s there in front of them to scrutinise. If it’s a neo-pro we’re introducing then it’s easier for the teams, because we know the ropes. 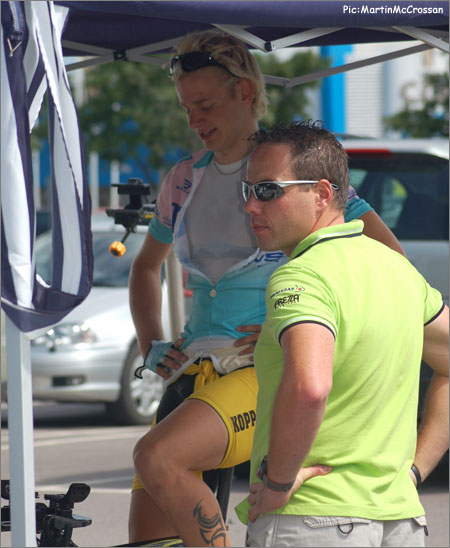 PEZ: Do you help with tax, mortgages, insurances – that kind of stuff?
Martin: Yes, if they need that. As I said, I’ve built up a network of professionals, who I can call upon. I’m from a legal family, my Dad was a tax lawyer (retired now) and my sister trained as a solicitor, (but is now an award winning writer), so I have a good grounding on that side of things. I want the riders to concentrate on what they do best – training and racing. It’s my job to take the stresses away, and if they need their car insurance renewed; picked up at the airport or travel arrangements made, then we’ll do it. There’s all the other stuff, of course, including arranging interviews and sorting out TV appearances.

PEZ: We heard about Valverde using T-Mobile for ‘leverage,’ is that how it’s done?
Martin: Riders are always going to try and get the best deal; “so-and-so offered me this.” I can’t comment, but I’m sure it goes on.

PEZ: How about shoe and helmet deals?
Martin: Yes, I help with those, we try and leave those aspects – and maybe pedals – “open” on their contracts so as we can negotiate separate deals.

PEZ: Best part of the job?
Martin: For someone who loves bike racing, next to actually being a pro, it’s hard to think of a better job. You’re involved at the highest level with really inspirational people, it’s a privilege.

PEZ: Least favourite?
Martin: It’s 24 hours a day, seven days a week, but that’s the nature of the job – and it’s the best job in the world!

PEZ: And are pros an honourable and scrupulous bunch?
Martin: I think they are; I deal mostly with British and Swedish riders, they have good ethics and good morals.

PEZ: This will be your busiest period?
Martin: Yes, but it starts in May, you don’t want your riders to be wondering about a contract in November! You have to keep the managers appraised of what’s going on, well before the September 1st ‘announcements’ date.

PEZ: Finally, tell us about your most difficult commentating gig.
Martin: Maggy crashed in Qatar, earlier this year. That was one of the hardest commentaries I have ever done. You are sitting building up for the sprint and you watch it unfold before your eyes as your number one rider hits the deck. I could see the way he was sitting in the road what he’d done, so I was texting Steve Benton Maggy’s coach while I was still talking, and by the time we came off air, we had set up an appointment to see the shoulder specialist who had rebuilt the other shoulder. 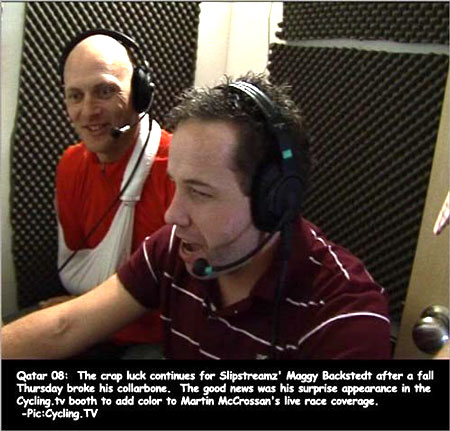 Magnus and Martin in the commentary box post-Qatar crash.

I picked him up from Gatwick at 630 am we drove into London, he joined me in the commentary box, did the race then went to the hospital. The specialist decided to plate the collarbone. We checked him in, he had the operation and I took him a large pizza in the evening, much to the jealous looks of the other patients in the ward.

I then deposited him with his wife Meg the next day so he could recuperate.

Hey ! That doesn’t sound like “Mr. Ten Percent” to us!
Martin can be reached at [email protected]

With thanks to Martin for his time and patience.