Marty Jemison rode in the European pro Peloton for over 10 years. He won the Pro & Amateur US national championships, completed the Tour de France twice, and now resides in Park City, Utah. He currently operates his own business, guiding cycling tours mostly in Europe, and also in North America. PEZ caught up with him and discussed his business, life as a pro cyclist, life after professional cycling and a few other off-camber topics.

Today In Your Life:
PCN: What inspired you to start operating cycling tours?
MJ: “I originally had the idea while I was still racing in Europe. I always thought it would be a great idea. And obviously it’s a bonus that I’ve actually done the races, and still know a lot of the riders in the Peloton. I also like being in Europe. 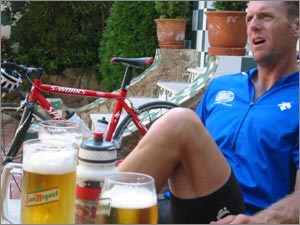 The pace is somewhat more relaxed on Marty’s cycling tours.

PCN: What are the unique aspects of your tours?
MJ: “Well, the fact that a professional cyclist is the guide is a huge thing. I can’t ever guarantee anything, but there’s always a great chance, depending on the race, that we’ll run into some of the riders from the Peloton. Most races, besides the Tour de France, we can ride up to the riders I know and say hi. At the Vuelta, Freddie finishes 3rd and we talked with him a bit right after. And also that we’re not the ‘big corporate machine’ is also unique. I had the idea and actually had a business plan before I saw what some of the larger companies were offering. I think we cater to people who are looking for a true cycling tour. To people who have their own bike, and want to ride their own bike and put some good miles in. We’re not doing any really hard days, but we’re putting in miles, especially if we’re riding in the mountains. 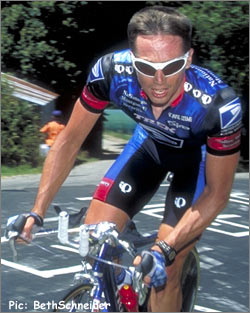 PCN: Where do you see your business going in the next 2-3 years?
MJ: “Well, I want it to be very well refined. I’d like to do 8-10 tours, and do them really really well. Just very well refined. I’ve thought of expanding into some types of adventure trips, but definitely nothing for sure yet. For example, maybe some adventure mountain bike trips, but that can be difficult. You’d have to be a very good rider for some of those trips. We’re doing the Tour de France in three separate stages, and the 3rd stage is booked full already. I never thought we’d be booked 13 days after the route was announced.” 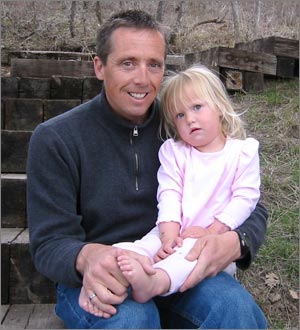 Besides cycling, Marty has other great loves, like his daughter Atlas.

Life Beyond Pro Cycling
PCN: What do you miss most about being a professional cyclist?
MJ: “Well, if you think about it, it’s a very small group of people in the Peloton. There’s maybe….1,000 people, with riders and management? That’s pretty small, and I spent 10 years with that same group of people. I don’t know, some people do, maybe some people don’t miss it, but it’s like your four years of high school, you maybe miss that a little bit when you’re out of it. And I was there for 10 years…so twice as long. It’s definitely a family. The races and the travel as well. Definitely the races.”

PCN: In your life today, what replaces those things you miss about professional cycling?
MJ: “I didn’t ride a bike for a year and a half after I retired. Not one ride for eighteen months. That’s a huge change, and it wasn’t on purpose. A few weeks turned into a few months, turned into a year and then eighteen months. And it was good, and I had a huge desire when I came back to it. But, I’m still traveling and still being able to touch the races is great. I can say that if we’re following a race, and an old teammate rides by, they’ll stop and say hi. 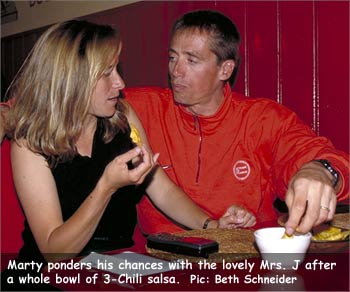 PCN: How much time do you spend on your bike these days?
MJ: “About 2-3 times a week I’m doing something aerobic. I go to the gym as well. I just got back from a training camp in St. Louis, and I haven’t rode that much in a long time.”

PCN: So, when you ride with your tours, are you relying mostly on the huge base you have from riding professionally for so long?
MJ: “Yep. It’s pretty easy (If I could only convey the ease with which he said this – you’re killing us here Marty!!). A lot of the people train for those trips, and they ride them pretty much at, or close to their threshold. I’m just getting stronger as I go. My body starts remembering those fitness levels, and I just get stronger. I can definitely stand to get more fit, but riding like that is fun.”

PCN: Anything special planned for the winter?
MJ: “Skate skiing. We just got some snow here. The most snow I’ve seen at one time here in 6+ years. Just some skiing and getting everything ready for our tours next year.” 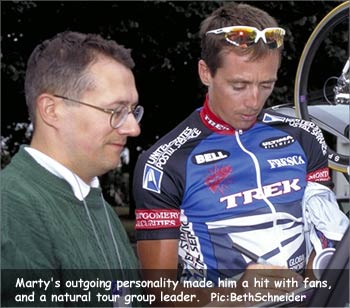 Advice For The Young, USA vs EURO, & MTB’s
PCN: Recently Saturn, Schroeder Iron, etc. have dropped their sponsorships of pro cycling teams in the U.S. What do you think of U.S. Professional cycling as it stands now, and where will it be in the future?
MJ: “I think it’s cyclical here. There’s so much history built into so many of the races in Europe. Here, there are some races that are 10 years old, and there’s sponsors…and that’s old. The TV coverage is a big thing on OLN. Not that many people have OLN in the U.S., but just that it’s getting the coverage is huge. That’s so much exposure that cycling has never had. I think more people will get on a bike because of it. I definitely think it will grow, maybe not right now, but it will grow.”

PCN: What advice would you give a young rider looking to join the pro ranks one day?
MJ: “I would say there are two avenues. One, you can do all you can here in the U.S. to join the National Team. They’ll take you under their wing, and you can do a lot there. The other would be to go to Europe and submerge yourself in cycling. You can go to France, Spain, or even Belgium. France and Spain you can do a lot of quality road racing. That’s the main difference….I ask guys around here, and the top guys are doing 40, maybe 50 races a year. In Europe, you can do 70, 80 or more…and those are 90, 100 mile road races. In Belgium….that’s tough. You could very easily not survive there. Those kids are so fast. And the pro ranks are scary. But diving into cycling in Europe is how you get a taste of what it takes.”

PCN: Having rode extensively overseas, what are your thoughts on cycling in Europe versus cycling in North America?
MJ: “Yeah, it’s definitely different in Europe. There are people who drive their cars like we do, 5 or 6 days a week, but then go out for a long ride on the weekend. And people do that here, but there are just so many more people in Europe. It’s part of history. Or even after work, come home and get on their bike. And people commute too, but they use their cars like we do as well. Just the number of people who ride is greater. That just won’t change. But I’ve also noticed some micro changes recently. Maybe less tolerance for cyclists. But that’s everywhere, the whole world is speeding up.”

PCN: You’ve won Chequamegon mtn race a couple of times, what was that experience like?
MJ: “A blast!! An absolute blast!! It was great, it was something I did on my own. For so long, I had sponsors and management telling me I had to do these races, or this many events. This was something I just did on my own. And you don’t need to have great mountain bike skills to do it, it’s basically on fire roads, so it’s just riding a mountain bike as fast as you can. I pulled at the front the whole way the 2nd one too. It was a blast though.”

PCN: What are some of your most vivid experiences as a professional cyclist?
MJ: “Wow…pick one! I’d have to say finishing my first Tour de France is one. Riding onto the Champs Elysses is something very special. There’s something about that moment as a professional cyclist. Most professionals don’t feel complete until they’ve finished the Tour de France. The Champs is all brick, smooth brick, and looking up at Paris, it’s very special. And afterward, everyone tells you ‘welcome to the club’. There’s so many, but that’s definitely one.”

PCN: We really appreciate your time Marty…thanks for talking with us!
MJ: “No problem, take care!”

Check out Marty’s website for info on his cycling tours at www.martyjemison.com.

Forget Shaq or Tiger…I’ll Back George!!