Ondrej Sosenka is a Czech rider on the Polish CCC-Polsat squad. A team we may not hear much about in North America, but holds a Div. 1 ranking and is led by former Giro winner Pavel Tonkov. PCN’s Michele Tomasi talked with Ondrej recently, and introduces his eastern-European perspective on life as a pro…

PCN: How did you get started in bike racing?

OS:My racing career began very inconspicuously. From my early childhood my parents took me to cycling trips. When I was about 14 years old I tried my first race in the junior category, but I experienced my first win two years later. My early successes encouraged me to think about cycling races as a possible future job. This was about ten years ago. I think that time cycling was generally more popular among the public, and professionals were much more respected at that time than today – in terms of both social recognition and the money won.

PCN: What are your strengths on the bike?

OS: I really think I am good at time trials. But also in the hilly terrain, in downhill segments and when there is wind, I think there is seldom anyone faster than me. Sprinting is my weakness, but I usually do not elbow my way in the sprints… As a professional, I have so far won 25 races, and in most of those cases I arrived at the finish line after an escape either alone or in a small group. If I am arriving in a big group, it’s enough just to have the same time as the winner.

Of course, no racer will ever say he does not want to be still better in the hills… You can never be quick enough there, and it’s there that the results are usually decided. I of course focus my training on improving my hill riding performance.

PCN: What will be your objectives this season?

OS: In this season we are new among the first-division teams and we want to hold our position among them. This means that we must collect points in well-rated races. I myself have the task to collect as many points as to remain among the top-hundred of the world ladder. In addition, I have another big private objective: I would like to overcome the world hour record. The question is if I can find enough time for special preparation, which is, of course, necessary. 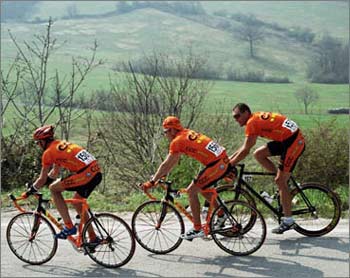 PCN: How did you get to Poland?

OS: CCC Polstat team head Andrzej Sypytkowski invited me to his team. Some time before that, we had met as racers in the VC Lugano team in Switzerland. I had been a junior then and he had been just about to stop his active racing career. The fact that I am now in Poland gives partially an answer to the second part of the question: how popular cycling is in the Czech Republic. In Poland, cycling is perhaps sport Number Two next to football, in the Czech Republic there are at least ten, or even fifteen other sports more popular than cycling.

PCN: Did you receive offers from other teams?

OS: I have led negotiations through my manager with several teams stronger than CCC Polsat, but they were only able to offer me the domestique role… In my current team I am among the team leaders and – strangely enough – my earnings in Poland are better than what I have been offered in much richer countries!

PCN: Are you the second leader, next to Tonkov?

OS: This is exactly the case I’ve just spoken about. If our team wishes to stay in the first division, it must win UCI points. The Peace Cycling Race coincides with Giro d’Italia. The team will split. Tonkov will of course be No. 1 in the Giro and I am to be in the Peace Cycling Race team. Afterwards I am to be No. 1 in the Switzerland Cycle Race and in the autumn I will be Tonkov’s right-hand man at Vuelta in Spain which, however, coincides with the Poland Cycle Race, where Polish racers will be CCC leaders. 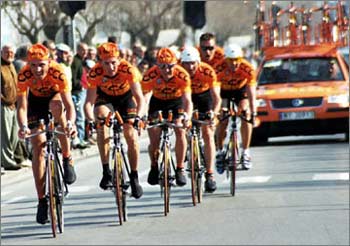 OS: I spent four years in Italy racing as amateur. Some of the races led partly along the roads of the Giro route. I don’t think the route is what makes any route challenging. What is much more important is the strength of the racers taking part in the race, and the way they ride. Sometimes you leave the last ounce of your strength on a gentle hill, sometimes you fly up a much-dreaded mountain without even feeling short of breath. And who is this year’s Giro’s top favourite? Pavel Tonkov, of course! And Simoni will be his greatest rival.

PCN: Would you ever consider a female cyclist for a personal relationship?

OS: I have never thought about anything like that because no girl-cyclist has ever caught my attention so much. Generally I think that what is needed for a relationship is mutual respect and trust.

PCN: What has being a pro racer taught you?

OS:I think I have learned to toil and suffer more than I could have ever thought to be able to withstand. Such experience must be helpful in any circumstances in any moment of life.

PCN: What would you be doing if your weren’t a pro cyclist?

OS: I completed a hotel school, so perhaps I would have served guest in a pizzeria if I were not a cyclist. Maybe I would make career as a headwaiter. I hope I won’t miss the pizzeria. To be frank, I have been doing the racing and training during the past few years mainly because I wish to be the owner of such a business.

PCN: Do you have any rituals for good luck before races?

OS: It’s usually enough to knock with the fingers of my right hand on the handlebars.

PCN: What do you think can be done to make cycling more popular?

OS: I and perhaps many other racers are able to show a good and thrilling sport performance. But if there are no journalists around – and the TV, as far as possible – we can hardly achieve more than talk to each other how good we are and how beautiful cycling is.

PCN: What countries have you raced in?
I have attended racing events in almost all European countries. I have been to Australia and Asia several times. But America has so far been avoiding me. I hope I’ll go there this year to the world championship. And what I would like to see there? I hope nobody will feel hurt if I say that for me the best picture of America would be a Czech racer wearing the World Champion T-shirt. And I don’t insist I myself should be that Champion.

PCN: What advice would you give to young racers?

OS: First, your health must be your priority. The second thing is to learn how to train properly. And the third thing is patience. Fortunately enough, cycling is a sport in which, if you are healthy and are willing to train hard and long, you cannot miss your success! I am fortunate to enjoy good health and I have learned how to train properly. It’s not the matter of volume, although I have learned to withstand ever-greater training intensities.

PCN: What can be done about the doping situation?

OS: These are no rumours, it’s reality, unfortunately, all the affairs we have seen in recent seasons. It’s far from confined to cycling, but cycling is perhaps more closely watched by the public. The officials seldom make distinction between individual cases in cycling, and apply exemplary punishments for faults which only incur admonition in other sports… I myself was affected by a half-year ban on racing four years ago because of having used effedrine. Considering today’s practices, that was in fact just a story to laugh at. But it is a problem and I don’t want to say I take it lightly.

PCN: How has the trajedy of Kivilev impacted you and your team?

OS: Of course, such a tragedy affects everything around. I think in our team we are now stricter with ourselves in deciding whether to wear the helmet or not. I must admit I very often put the helmet off in hot weather even in the most dangerous routes. Now I’ll think twice before I do that.

You can visit Odrej’s website and test your foriegn language skills at www.sosenka.cz