Belgian rider Christphe Stevens has just completed his first year as a pro with the Div II Belgian Marlux-Ville de Charleroi team, but has suffered enough set-backs to make even the oldest pros envious. A self-proclaimed lover of “the spring Classics” (what Belgian isn’t?), Christophe has ridden in some esteemed company including Peter Van Petegem, Axel Merckx, and under the management of Willy Teirlink – who Stevens considers “one of the best tacticians in cycling”. Mostly health related knee troubles – the results of some heavy crashes while cycling – have impacted him for 6 years and delayed his entry to the pro ranks, but also served to stoke his motivation.

By way of introduction, Christophe says: “I was born August 10, 1974 in Geraardsbergen, Belgium and still live there together with my girlfriend Muriel. Geraardsbergen is best known for one of the hardest climbs in cycling, The Mur. Also the “mattentaarten” are pretty famous around here, it’s some sort of pie. Geraardsbergen is located just next to the border with the french speaking part of Belgium, Walloniл.” 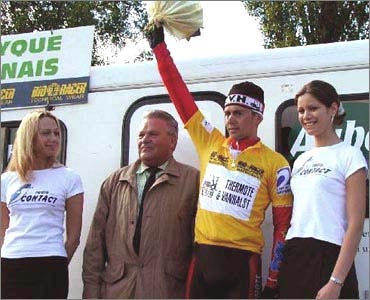 Photo: The spoils of victory. Stevens also enjoys the winners jersey of Stage 1 at the Triptyque Ardennais.

1. PCN – How did you get started in bicycle racing?
CS – I started playing soccer at the age of 5 and quit at the age of 15, that’s when I started cycling. I was playing for FC Brakel, that’s the town Van Petegem used to live. Van Petegem was playing for OLSA Brakel, our big rivals. Now people associate Brakel with another big name in cycling, Robby McEwen. When he’s in the country he’s also training with our group: Baguet, Van Petegem (Lotto), Van Bondt (CSC), Klier (Telekom), Eric and Mario De Clercq, Andy De Smet (Palmans-Collstrop), Scott Sunderland (Fakta). We all live in a radius of 20 km.

2. PCN – Are your team plans set for next year?
Until a few weeks ago it looked as I was going to ride for the Landbouwkrediet-Colnago team (Ludo Dierckxens, Tom Steels, Popovich …). Unfortunatly the deal was of when Steels toke a big part of the budget. The last week changed a lot and it looks like I’m gonna stay with the Marlux team. We have a new teammanager, Jef Braeckevelt who was with Lotto for about 15 years. He’s bringing some good riders to the team. There’s also the Palmans team wich might be Trade Team I next year. The next couple of days will point out where I’ll be riding next year.

3. PCN – Which results are you most proud of?
CS – My Best results? In 2000 I was amateur State Champion, won a stage in Vuelta Lerida, Haaltert-Geraardsbergen-Haaltert, a pro-race in Zwevezele, and was 3th at the National Championship. In 2001 I was 2th at the National Championship, won my second pro-race as an amateur in Vilvoorde, a stage in Vuelta Tarragona, and my most beautifull victory so far the first stage at the Triptyque Ardennais where I beat the Italiens and World Champion Dany Pate, who won the overall classement (I was 3th). 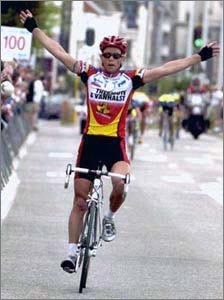 4. PCN – You turned pro just this year, at 28 years old. Was your decision a bit unexpected or were you planning for it? and what motivated you to become a professional bike racer?
CS- Last year was my first pro-season and I was riding for Marlux. A small Division II team. Before that I was riding for the Kortrijk Groeninge Spurters, at that time the best amateur team of Belgium with Willy Teirlinck (check out his palmares) as team manager, he’s one of the best tacticians in cycling. My first 2 years amateur I rode for the ASLK-Merckx Team. If you look at the names of that team it’s pretty impressive: Tom Steels, Axel Merckx, Bert Roesems, Mario Aerts, Rik Verbrugghe, Fabien Dewaele, Paul Vanhyfte … not bad. At the start of my second year amateur I had a hard crash in Franco-Belge and it took about 10 doctors 2 years to figure out what was wrong with my knees. Finally it was Jacques Rogge (now the big boss of IOC) who put my kneecaps in the right position. Later I had to undergo 2 more operations on my knees caused by some stupid crashes. So I can assure you when someone has a problem with his or her knees you can contact me, I know what I’m talking about!

After my results of the last 3 years it wasn’t much of a surprise to me. I may be already 28 years old but as a rider I don’t feel that old. Maybe that’s because I’ve lost 4 years due to 6 knee operations. It just had to happen once. In 1999 Peter Van Petegem wanted me to join the TVM team after the spring classics but one of the team managers gave someone else a contract without Peter’s knowledge. The next year wouldn’t be a problem … but then Cees Priem got fired and the new team manager said “no more friends of Van Petegem”. November 2000 I signed an agreement to ride for the Lemond-Viatel team … but later Viatel went along with Mercury and there was only place for 3 instead of 5 Belgian riders. So this year it finally happened.

5. PCN – As a new pro, you must be looking forward to one day riding the Grand Tours – do you have a favorite?
CS – To watch on tv: Tour de France. But I guess the Vuelta would fit me the most. I always liked racing in Spain.

6. PCN – And your least favorite?
CS – Tour de France because I don’t really like the country. The food and hotels suck over there.

7. PCN – Do you have a favorite race in the UCI calendar?
CS – I hope I can do the “Ronde van Vlaanderen” once. Without a doubt it’s the most spectacular race of the season and of course I live in Geraardsbergen, only 2 km away from the famous Mur.

9. PCN – If you could improve a part of your riding, what would it be?
CS – That’s an easy one, time trialling of course. It’s a disaster ! I wish to have a word with the guy who invented that discipline! 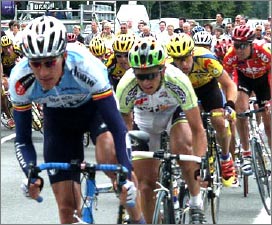 10. PCN – Would you ever consider marrying a female cycling racer? What qualities are most important to you for a successful relationship with your partner?
CS – No … because everything in your life would be cycling and I wouldn’t like that. Also because I found the right one already. Important qualities: being honest and let each other do his or her thing, you still need your own life.

11. PCN – What do you learn as a professional racer that is valuable in other areas of your life?
CS – Not only as a professional but as a cyclist in general you’re always on the road and meet people from other cultures an countries. Let’s just say that it expands your world.

12. PCN – If you were not a racer, what do you think you would be doing?
CS – Until last year I was working in my dad’s company (deskjob) so I guess that would be the thing to do if I wasn’t a racer. Or something with internet, I like building websites.

13. PCN – Before a race do you follow any specific routine or ritual for good luck?
CS – Not that I’m aware of, I just take a piss before the start. But I guess that’s not routine, just something I have to do.

14. PCN – Cycling is gaining in popularity in North America, what do you think can be done to make it even more popular here and around the world?
CS – They should bring back the Tour Dupont and broadcast it live. People in the States think there’s only the Tour and Lance.

15. PCN – Have you visited North America?
CS – I just got back last week. Together with my girlfriend we traveled around Florida for 2 weeks. In 2000 we did something similar in the southwest: San Diego, Los Angeles, San Francisco, Las Vegas and the national parks. And in that same year my team did the Univest Grand Prix in Pennsylvania, we won and I finished 4th. The day after we were there when Nicole Reinhard made her fatal crash. One year later we were about to leave for the Univest GP again but our plane was scheduled on september 12 … we were on the twin towers the year before. 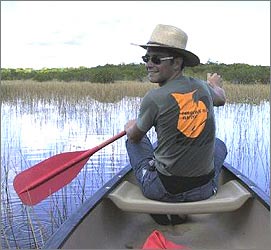 Photo: “This was in the Everglades just a few weeks ago. Nice place except for the mosquitos, my girlfriend had about 70 bites while I had none … great!”

16. PCN – What advice would you give to a young rider looking to be successful in the pro peloton?
CS – Take your time for it, don’t rush it, and don’t take it too serious. I see a lot of young riders who don’t know anything else but cycling and most of the time that doesn’t turn out well.

17. PCN – What’s your opinion about the latest doping problem at Giro 2002? What’s the right way for resolve the doping problems?
CS – It gave cycling a bad image (again). The problem will never be gone but they can never do enough drug tests.

18. PCN – What does a professional cyclist feel when he is called “drugged”?
CS – It happens a lot when you pass by with the peloton and there’s somebody yelling “EPO” or something like that to us. But I don’t realy care about that because if that guy can’t come up with a better slogan then that he’s a loser.

19. PCN – What about Cipollini and his victory at last World Championship?
CS – Super … he’s one of the greatest champions of the last 10 years and he’s the man to make cycling even more popular all over the world.

20. PCN – This first year in the pro peloton for you has been really unlucky, with 2 nasty falls. What were your main objectives of the season? And what did you learn in this season?
CS – Last winter I trained real hard together with Van Petegem, Baguet, Van Bondt, Klier and some of the other pro’s who live in my neighbourhood. I wanted to do real well in the spring classics and was convinced that I could but it all turned out different. I broke my collarbone in the first race of the year and 2 months later in my second race after the first crash I broke it again. Later in the season I regained my confidence in the Tour Rйgion Wallone where I finished 10th overall and battled on the climbs with riders like Bettini, Van Petegem and Museeuw. What I’ve learned this year is that my TT stills sucks!

21. PCN – What’s your main objective in the 2003 season?
CS – Making good results in the spring classics so I can get to a bigger team and improve my TT.

22. PCN – How will you prepare your next season? How will you prepare this winter?
CS – Since I had those problems with my knees running or power training is out of the question for me. I’m gonna start swimming now in the winter and I love training on the track in Ghent. But most of the time it’s riding the bike on the road. If the weather is too cold I might go to Lanzarote for some training and I might do some bodysurfing over there to, great place to surf Lanzarote.

23. PCN – Do you have a personal website that our readers could visit?
– What is the url? www.stevens-c.net