“Young and talented, got a huge future, strong, proven his abilities with his results, acts like a pro.” So says USPS/ Berry Floor top guy Dan Osipow about their recently signed Belgian wunderkind Jurgen van den Broeck. We talked to Jurgen last Saturday with a few questions of our own…

Although new to the English-speaking fans, Jurgen has been cutting his teeth in or near the pro bunch since he shined up his palmares with the U-23 TT victory in Lisbon, which was followed by seasons riding with Domo, and then Quick-Step last year. The ever-watchful eye of Johan Bruyneel saw some obvious potential in the young Belgian, who recently signed a 1 year contract (his first as a pro) with the TDF powerhouse American team.

We sent our decidedly chatty Jered Gruber, to interview Jurgen – raised in a country of conversational … shall we say, “efficiency”? Here’s the poop…

Jurgen: I don’t know yet. I will not find out until the second training camp in California which is in January of 2004. 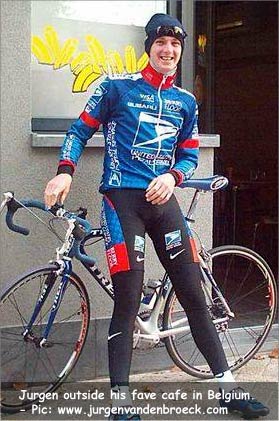 PEZ: What races would you like to do if you could choose?

Jurgen: The classics like Fleche Wallonne and Liege-Bastogne-Liege, as well as the Tour de Belgique, and a grand tour if possible.

PEZ: What is your long-term focus?

PEZ: How did your deal with USPS come together?

Jurgen: I’ve always wanted to be on the team of Lance Armstrong, I got the chance, so I took it.

PEZ: Why did you leave Quick Step, one of the better teams in the world?

Jurgen: The Classics are not really for me. I wish to do well in the Tours.

PEZ: What would you say are your strengths and weaknesses?

Jurgen: My climbing and time trialing are good, but not super. A weak point would be a race like Paris-Roubaix.

Jurgen: The World Championships. It’s a special race, a lot different from a normal Classic.

PEZ: What would you say is your biggest success so far?

Jurgen: My Time Trial victory at the World Championships in Lisbon as a Junior.

PEZ: Would you like to take part in the 2004 Worlds in Verona?

Jurgen: That would be difficult for me to do, maybe in a few years.

Dan Osipow mentioned that at the recent team training camp in Austin, Jurgen appeared happy and relaxed amongst his new teammates and fit in well with the group…

Jurgen: I am motivated to ride for Lance, before the first training camp in Texas I was nervous to meet him, but now it’s ok. I got to talk to him a little bit, but not too much.

PEZ: What did you think about Johan Bruyneel and your new teammates?

Jurgen: It’s big! I’m looking forward to going to California. I heard that California is really beautiful (the site of the January training camp).

PEZ: Who did you admire as a cyclist growing up?

Jurgen: Lance Armstrong and Frank Vandenbroucke. He’s [VDB] a special guy, I hope he comes back, but I don’t think so. He’s really good for 2 to 3 races a year, but not a whole season. 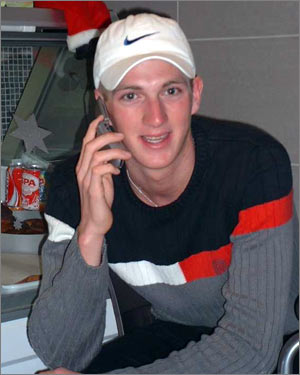 Given his choice to win any race, he says “Tour de France, definitely”, and adds that he’s ridden a few of the Tour climbs: Alpe D’Huez, Les Deux Alpes, and the Galibier.

Jurgen: Best bike yet. The best bike I’ve ever had. A year ago I had a Time and it was a full carbon frame just like the Trek, but the Trek is just much better, especially on the cobbles.

PEZ: What are your other interests outside of cycling?

Jurgen: Not so many. When I’m not on my bike, I’m usually with my girlfriend. I also use the internet a bit as well.

PEZ: What does your training look like right now?

PEZ: What kind of training did you do today?

Jurgen: Ah, the weather was too bad today, the whole day raining. Tomorrow I will go to the gym.

PEZ: When do you plan on starting into the big hours?

Jurgen: I’m going down to Mallorca (Spain) by myself for the first week of January, and then at the end of January is the Postal camp in California.

PEZ: I’ll be there too at that time! Maybe we can ride together!

PEZ: What kind of training will you be doing in Mallorca?

PEZ: What do you think about Mallorca?

Jurgen: Really good training. There is one part of the island that is mostly flat and then the other side is all mountains. Good for training.

PEZ: If you could give a young, aspiring rider some advice (like me), what would you say?

Jurgen: Lots of training and take good care of your body.

PEZ: What kind of racing did you do when you were younger?

Jurgen: I did a lot of Belgian races, as well as races in France and Spain, and a very international program as a whole. In the younger categories I think it is important to race internationally.

PEZ: What do you think about Kermesses?

PEZ: What kind of schooling have you done?

Jurgen: I graduated at 18 and then stopped.

PEZ: What are you doing over Christmas?

Jurgen: Staying at home, enjoying the holidays with my family.

PEZ: Am I the worst interviewer you’ve ever had?

The Pro Shop – Off Season Goals