Just like there are amateur riders and ‘super’ riders, there are ordinary fans and ‘super’ fans – if Rita Tanner was a rider, she’d be Tom Boonen, no sorry, make that Fabian Cancellara, he’s Swiss too… but she’d really prefer Rubens Bertogliati…

Few fans we’ve seen (okay none) have shown the die-hard enthusiasm for a rider that Rita has… She’s passionately thrown her support behind Swiss pro Rubens Bertogliati for a bunch of years now, and dedicates her vacation time to seeing him race. 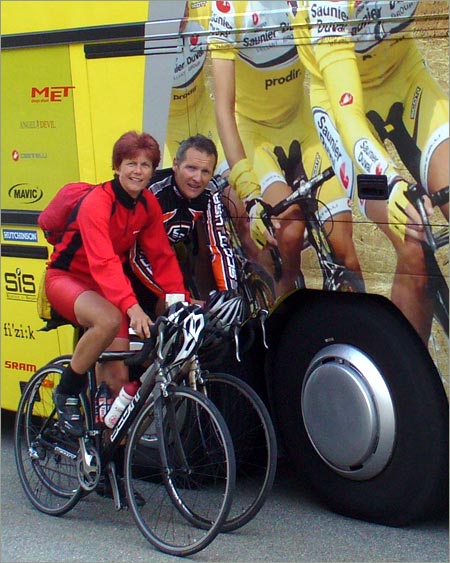 Rita has wisely recruited her husband Wolfgang for her tifoso adventures.

We first met Rita a few years back, after we’d done one of our first interviews with Rubens. An email arrived requesting copies of the photos we’d used, and politely requesting additional photos. Since then, every time we’ve published some news of the Saunier Duval-Scott rider, Rita has dropped us note.

Pez: Why Rubens, not Fabian or say, Bruno Risi?

Rita: I don’t know why, there were three riders from Switzerland in the 2001 Tour, we knew of Rubens but hadn’t met him until then, we just found him so helpful, polite – ‘sympatico’.

Then of course he took the yellow jersey in 2002 and we’d already known him for a year; he was riding for Lampre then – he was with them for four seasons and this is his fifth season with Saunier. 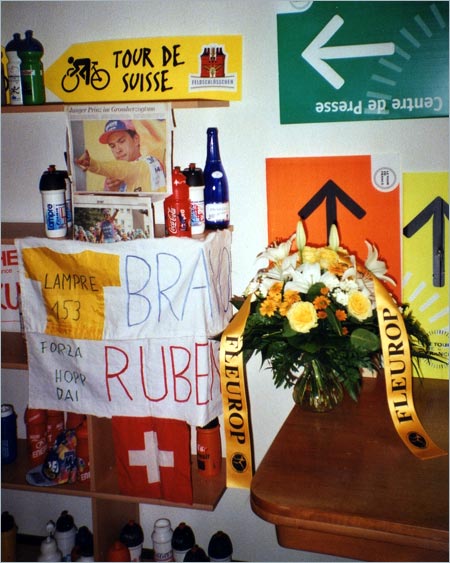 Just some of the Rubens memorabilia Rita has collected over the years.

Pez: What’s the furthest you’ve travelled to see him?

Rita: We’ve been all over, maybe the Vuelta was the furthest, but the Netherlands, Germany, France, Italy – if you’re a fan then you don’t mind the kilometres!

Pez: Have you always been a fan of cycle sport?

Rita: My husband Wolfgang, and I have been fans for many years, we used to be professional volley ball players and then volleyball referees. I was the first female referee to officiate at the highest level of the sport in Switzerland. I sustained a couple of bad injuries – snapped ligaments, as a player and the doctor suggested that I take up cycling to help me mend; my husband and I both took it up and we still do a lot of cycling together.

Pez: Where does a typical year take you?

Rita: This year we’ve been at Tirreno – Adriatico, we’ll be going to the Tour of Romandie, the Giro and the Tour de France. We’re not sure of Rubens programme after that – he’s riding the Tour of Turkey just now, Petacchi won today’s stage, I watched on German TV.

Pez: What’ the best thing about following Ruben?

Rita: Because I ride my bike a lot, it gives me a better understanding of cycling, I appreciate what the riders do and I have respect for them. Some people say; ‘cycling is nothing, it’s all about doping!’ but they don’t understand. I don’t believe that many riders dope, of course some do. But it is so demanding; away from your family, living in one hotel after another – it’s a tough sport. 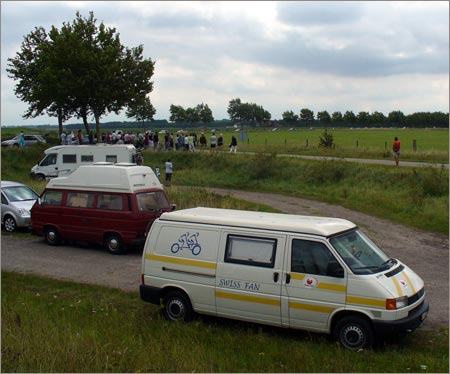 Their custom painted van is a fixture at races around Europe.

Pez: I believe you have a ‘Rubens archive’?

Rita: Yes, I have 3,000 pictures of him, not all are mine; I surf the internet to get them, but of course I leave the photographer’s name on them – I don’t claim them as my own. (there are even a few with Ed Hood’s name on them!)

I also record on to DVD from the television races that Rubens is riding; I have recorded the stages from Turkey – Rubens made a good attack at five kilometres to go, but he was caught. My husband also has videos of Rubens that he has shot and we edit these and store them on DVD.

Pez: Was Rubens in yellow in le Tour your best time as his fan?

Rita: Oh yes! We had already known him for one year at the time (2002) but we couldn’t go to Luxembourg to see the race because we had a 70th birthday party celebration to attend for one of our family. When Rubens made the breakaway that won him the stage and the jersey, the commentator said; ‘a Lampre rider has escaped’ – I knew it was Rubens! It was very tough not being there when he achieved that.

Pez: What do Rubens’ family think abut your admiration for him?

Rita: They think I am crazy! No, we are all good friends; I know his wife, his sisters and his brothers – even his wife’s parents!

Pez: How do you get the time to follow him so much?

Rita: We take our holidays from work to coincide with the race programme; really we devote every spare minute to it.

Pez: I believe your camper van is in Saunier colours?

Rita: Yes we have Saunier stripes on it, we used to have it in Lampre colours, but we changed it when Rubens changed teams.

Rubens and his number 1 fan – Rita.

Pez: The hardest question –what will you do when Rubens retires?

Rita: I will be crying, this will be a very sad day. When he stops, we will still follow races, but it will be hard if Rubens isn’t riding.

It’s people like Rita and Wolfgang that make our sport so special – so we’ll see you at the Giro in Verona, Rita!

And by the way, Rubens really is a nice guy.