Women’s racing in North America may not have the same profile as the men, but if anything this only fuels the ladies’ desires to improve their lot by proving to fans and sponsors they’re every bit as worthy of attention. The BMW-Bianchi squad is proof you can build a competitive team with racers who actually have ‘real’ jobs…

A women’s cycling team in North America has been provided by BMW with a pair of brand-new, fully decaled BMW X3 SAV’s to use as team vehicles for the 2006 season. It’s not who you might guess. The team has quietly been building a reputation as one of the most cohesive and “professional” amateur elite programs in the USA. It would come as no surprise to anyone who follows cycling in the Southeast that the North Carolina-based BMW-Bianchi Women’s Cycling Team is the deserving recipient of such corporate largesse, but just how does a team of elite level 9-5ers who excel regionally, but have modest national results, procure such sweet vehicles for the season? It’s not a secret that when it comes to sponsorship, it isn’t all about results – it’s about character… 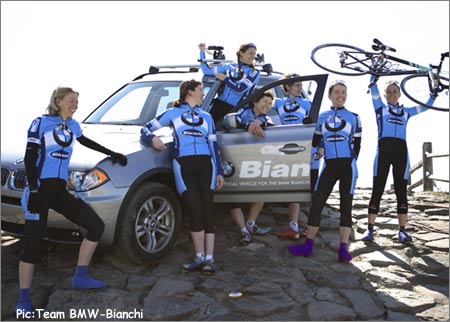 The team poses atop the off-road training course next to their X3.

Plenty of teams play lip service to the concepts of teamwork, commitment, professional behavior, sportsmanship, and camaraderie, but more often than not these are merely hollow words which are never imbued through a team’s riders in training or implemented on the weekends while racing. Over the past several years, however, under the watchful and passionate stewardship of captain/ manager Laura Weislo, an elite level cycling team (as well as a development squad) living these very ideals has progressed from concept to reality. And for everyone who feels that “If only I didn’t have my 9-5 job, then I could be competitive at national-caliber events”, the BMW-Bianchi squad proves that a team populated solely by women with full-on careers can be competitive when the gun goes off. 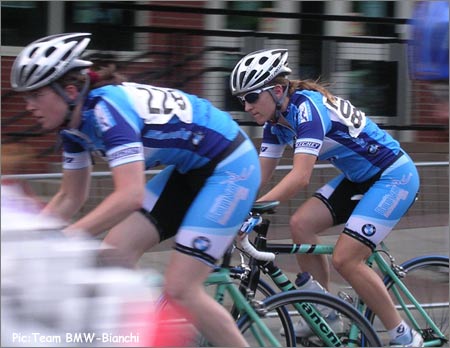 The team flew their colors at home base (at the Raleigh, NC NRC criterium, sponsored by local dealer Leith BMW).

Creating the Reality
Says Laura Weislo, “My objective with our team was to create an atmosphere where women bike racers could get treated like professionals – get the bikes, the kits, the gear, etc. that “pro” teams get without all the pressure, and without
having to give up their day jobs. My thought was that if you give them the skills and tactical know-how and treat them like pros, they could step up and race like pros. We had success last year with Katharine Carroll, who podiumed at the Joe Martin Stage Race, and subsequently got a pro contract, and with Mandy Lozano and Nancy Lux placing top 10 in national events.”

Katharine Carroll enjoyed her time with the team: “The two tiered team (elite and development squads) is the perfect model for a strong regional team. The more relaxed developmental squad was focused on improving bike handling skills, pack savvy, and gaining race experience and upgrade points. The elite squad focused more on getting results through team tactics… which prepared us for national level races. The organization and sponsorship were what you would expect at the pro level, but most importantly our kits were way pro, allowing us to look hot and ride fast.” 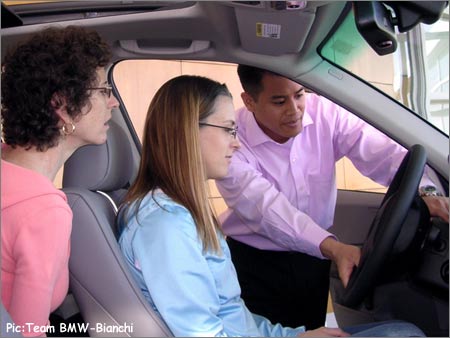 ‘Delivery specialists’ walk the ladies through the many features of the X3 SAV.

In essence the team has created a learning laboratory, a mechanism for sharpening a rider’s burgeoning competitive cycling skills, as well as an environment bent on fueling a lifelong devotion to a complex and nuanced sporting endeavor. New BMW-Bianchi team member Hannah Whitaker certainly embodies this cycling ethos: “Being only 22 I feel very lucky to have found cycling now as a facet of my life that will be with me forever, adding to my determination and confidence as I pursue a career, higher education, and life, and I am especially lucky to be surrounded by such inspiring female role-models who all set and meet high standards for themselves. Sometimes I feel as though I can do impossible things on my bicycle…” 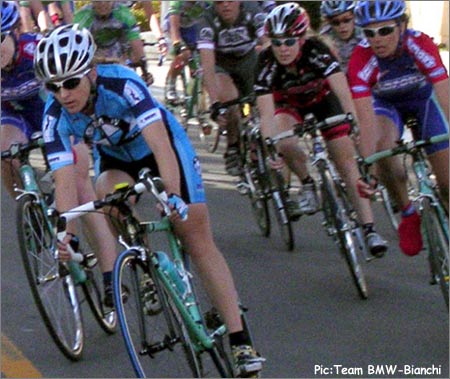 Driver Training For Racers
This team ethos fits well with their title sponsor’s, and the BMW-Bianchi team members discovered the seemingly impossible things they can do behind the wheels of a fleet of BMWs. Exemplifying the BMW lifestyle experience, women of BMW-Bianchi took delivery of their new X3s at BMW’s Greer, SC Performance Driving School. But BMW didn’t just hand over the vehicles, they provided an opportunity for the team to immerse themselves in a day of classroom instruction and implement new skills behind the wheel of several M3s out on the track. Interestingly enough, the same principles about cornering, braking, and acceleration already instilled in the BMW-Bianchi team through the heat of NRC criteriums applied directly to tearing around the driving course in M3s. 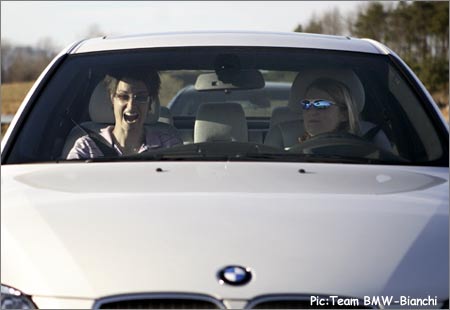 Not even staged: This is the kind of reaction that driving a BMW can bring!

“Drivers Ed taught you the ABC’s. Now it’s time for graduate school”. BMW is all about going the extra mile in ensuring that people using their vehicles have the training, education, and expertise delved from instructor feedback and hands-on learning while exploring and pushing limits in a controlled session. BMW-Bianchi member Missy Petty’s comments are a testament to BMW’s program: “The personal experience provided by Clint Kimel (driving school instructor) and the other BMW staff that were there gave us all perma-grins and racing attitude with a BMW kick! Now, when I think of our sponsor, BMW, I think of more than just the cars….I remember the words of encouragement behind the smiles and support.” 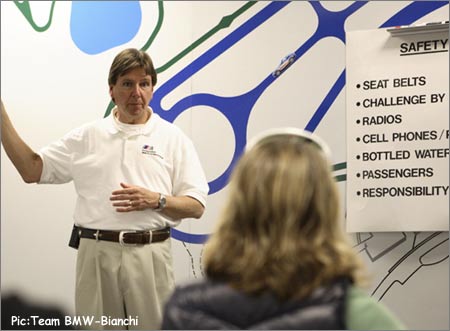 Clint Kimel teaches the team the rules of the test track.

Just as anyone can hop on a bike and pedal down the street, anyone can hop in a car and step on the gas. But given some expert guidance, direction, and infectious enthusiasm, simple participation can evolve into a sophisticated, lifelong appreciation. There’s a natural synergy of philosophy between the cycling team and the BMW brand, a tangible crossover which paved the way for BMW’s sponsorship. Both entities believe in providing the tools and exemplary support for motivated people to develop an extant skill set beyond, perhaps well beyond, their expectations. And by providing encouragement and professional level benefits (anyone who buys a new BMW can take delivery at the Performance Center and get driving instruction for free), both entities produce impassioned ambassadors, living-breathing embodiments of their respective communities. Of course BMW would want a pair of their vehicles associated with the Capital Cycling Club’s organization since BMW saw a similar process of education, devotion, and assimilation within its elite cycling team. And what company wouldn’t want poised, well-spoken athletes utilizing their product as a means to frequently travel to and promote such a healthy, positive, exciting sport as competitive cycling? 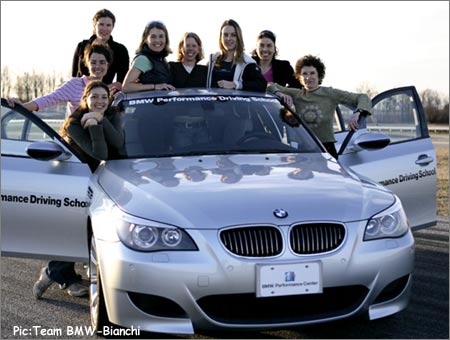 The ladies got to drive cars like this really, really fast.

Any weather. Any corner. Any pace. Any passion. The BMW X3 tagline certainly applies to the mindset of BMW-Bianchi team members eagerly ensconced behind the wheels of their own X3s, never fretting about driving deep into the Blue Ridge Mountains or negotiating downtown congestion. Keep your eyes peeled this season for the distinctive blue BMW-Bianchi kitted riders traveling the Eastern seaboard cycling circuit to test their competitive mettle, likely visible at the front of the peloton no matter what the discipline: road, track, or cyclocross. 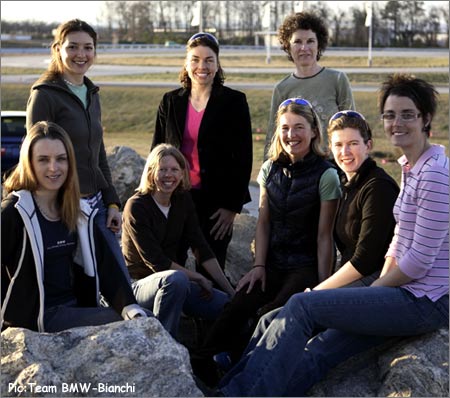