The young Swede Thomas Lцvkvist is starting his second year as a pro at FD Jeux, and has already made quite a name for himself, with 4 victories including the Circuit de la Sarthe, and this week a 12th at Paris-Nice. We talked to him before his 2005 season started…

Our meeting took place at the Team FD Jeux supporters ride in December, where hundreds of French fans turned out on a dreary Saturday to meet their heros and ride a few kms together. Thomas was kind enough to sign autographs for enthusiastic fans throughout our chat.

BC: So, I met Johan Lindgren today, is it good to have another Swede on the team?

BC: I know there’s a Finn joining this year too, how’s that?

TL: Good, he’s a good rider. He isn’t Swedish, but he can speak some, and he’s more like a Swede than a French person. But the team is very mixed, with Australians and so on…. 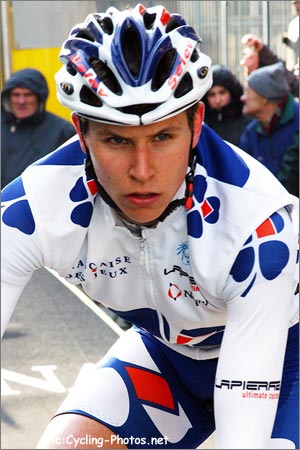 BC: So, do you speak French?

BC: Back in Sweden, is Magnus Backstedt a household name? Is he well known?

TL: No, not really… He won Paris Roubaix and just got a little bit
of press. Skiing and Ice Hockey are the biggest sports.

BC: So cycling’s not that popular?

TL: Not really. We don’t have any… no, we have one UCI race.
Actually, there are very good crowds there, lots of people support
it…

BC: How did you get into cycling?

TL: I don’t know really… I guess like all kids I rode my bike, I
rode some BMX. Then later I wanted to go faster and I started to ride
road. I joined the club and started riding more.

BC: How old were you when you started?

BC: Do you come from a sporty family?

TL: Well, my dad runs a bit, and has done some orienteering. My mom, not much. But my dad’s family does a lot of sport.

BC: What do you think about the La Pierre, how do you like the bike?

TL: I love it. We’ve got the new carbon frames and they are really nice. I’m enjoying riding it.

BC: Do you ever do any training with a power meter?

TL: Yes, I’ve got SRM cranks on my trainer. It’s a Monark, a Swedish
bike that are sometimes used in laboratories. I use it as a trainer.

BC: So you listen to a lot of music – have you got a favorite CD or band?

TL: I mostly listen to the radio because a CD isn’t long enough.
I’d have to get off the bike to change it. I like most other kinds of music though [except rap – ed], old stuff, new stuff….

BC: You live in France now, I read there were a bunch of Australian pros living down there, like Mark Renshaw?

TL: Yes, I have an apartment in Nice, that I share with him.

BC: What about French women… Swedish women are world famous for their beauty… Is that how you see it?

TL: Yes.. The French women aren’t quite there…

BC: But you are just spoiled… coming from the best!

(at this point he signs another autograph, for a woman who has him sign a photo of him on the podium at stage 10 of this years Tour de L’Avenir. She then tells him the second copy is for him. He looks and says….)

TL: I wasn’t very happy there… I had won the stage, and I thought I had won the race, but it turns out I missed winning by hundredths of a second. I was upset for a week. That’s were I got my contract though, the Tour de L’Avenir.

TL: The Grand Tour – the Tour de France. You have to do the big stage races to know if you will like them or not. But I’d like to do all
three of them during my career.

BC: Thanks for your time!

Oh My Aching Back – Part II