When Discovery Channel team announced major changes to their line-up for 2007, the details surprised many riders and fans alike. Gone are many of the stars and support riders who’ve been with the team for years, including veteran Michael Barry. We caught up with Michael in Switzerland before the start of the Giro di Lombardia, his final race for Discovery.

PEZ: Michael, this is your last ride with the Discovery Channel team…how does it feel?

MB: Well, later today I’m going to camp with T-Mobile, so that will definitely feel a lot different, but right now, it’s just another race. It hasn’t dawned on me yet. 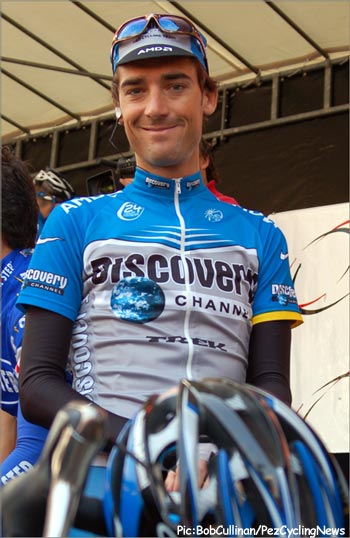 After smiling for our pic, Michael set out for several hours of ‘work’ riding last weekend’s Giro di Lombardia. His final race for Discovery Channel, Michael did like most of the peloton and climbed off before the Ghisallo.

PEZ: The guys that you’ve lived with, and worked with, and trained with will go from teammates to rivals within a matter of hours. That’s got to be a strange feeling.

MB: Yeah it is, but I think next year when we’re actually at the races it will feel a lot different.

MB: Pretty good, actually. I saw a lot of English-speaking guys there, and there’s a totally new atmosphere because a lot of new guys are coming on to the team. I know a lot of the riders already, and they’ve really hired a good group of guys. I’m excited to be a part of it. 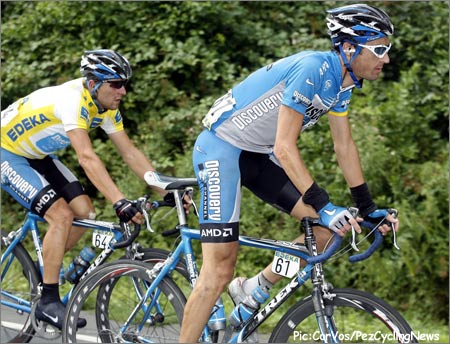 Michael earned his respect in the bunch as a solid team-man – here looking after Vladimir Gusev in the 2006 DeutschTour’s leader jersey.

PEZ: They’ve really got to make some major changes at T-Mobile, and bringing Bob Stapleton in (as the new General Manager at T-Mobile) has to be the biggest move that they’ve made to reform that team.

MB: For sure, yeah. He started restructuring the team after the Tour de France, and maybe even a little bit during the Tour de France, and they’ve made drastic changes there. My wife rode for him when she was racing on the women’s T-Mobile team, and she had a really good experience with him. He’s bringing a totally new element into the sport, because he’s a business man first, and not a cyclist, which I think is really good because it’s a different direction than a lot of other teams have had.

PEZ: Any last words from Johan Bruyneel and the other Discover team directors as you go into your last race? Have they said anything to you, or are they dealing with this just like any other race?

MB: Yeah, Lorenzo (assistant Sports Manager Lorenzo Lapage) is here right now, and he said to me, “This is our last race together,” and I said “Yeah, we have a lot of history here. I’ve been with this team five years, and they’ve been very supportive and I’ve enjoyed working in this environment. I think everybody was sad to see me go, and they’ve said some nice things to me, so it’s good.”

PEZ: So, now that you’re going with T-Mobile, can we expect another book about riding in the T-Mobile bus, kind of like your “Inside the Postal Bus” book from a couple of years ago?

MB: Hmmm…yeah, maybe. We’ll see. I’d definitely like to do another one at some point, so we’ll just have to see if I have the time.

• Fans can stay tuned to Michael’s move to T-Mobile at his website: MichaelBarry.ca

Pez Goes Black Tie: The “Oscars” of US Cycling